Although, the incidence of placenta accreta spectrum (PAS) and large fibroids is rare but still these cases contributes to a large number of maternal morbidity and mortality. Major obstetric hemorrhage is one the dreadful complication of these types of cases and thus early diagnosis and intervention in such cases helps the physician to minimize the risk to mother and the fetus. Also, current widespread use of ultrasound has helped us to manage these cases judiciously, predict and prevent life threatening obstetric hemorrhage. Here we present three complicated obstetric cases of placenta accreta, large lower segment uterine fibroid and large cervical fibroid which necessitated classical cesarean sections (CCS) thus emphasizing prowess in CCS in modern obstetric era.

Mrs X, 30 years female was referred to our department at ESIC PGIMSR Basaidarapur in view of abnormal placentation. Her obstetric profile was G3P2L1 with 35+6 weeks period of gestation, previous 2 LSCS with placenta previa? percreta (PAS), Rh negative pregnancy and moderate anaemia. She was a booked patient at her primary institute and was diagnosed as placenta previa in her earlier serial ultrasounds. Her MRI pelvis, done at 34 weeks suggested complete placenta previa with loss of T2 hypo-intensity of anterior wall of urinary bladder S/O placenta previa with ? Placenta accreta.

On admission patient was stable, all the necessary investigations were sent and adequate blood products were arranged. Her haemoglobin was 8.4 gm%. Other investigations were within normal limits. She was posted for elective repeat caesarean section and high-risk consent including consent for blood transfusion and need for hysterectomy was taken. After all pre-operative arrangements, she was taken for surgery. Cystoscopy with DJ stenting was performed under regional anaesthesia, which did not reveal any bladder involvement. During caesarean section, lower segment was full of large torturous blood vessels and placental bulge, indicating adherent placenta. Decision for CCS was taken. Alive and healthy baby delivered, spontaneous expulsion of placenta failed and thus caesarean hysterectomy was done. Surgery was uneventful. She required 2 units packed cells and 4 units FFP transfusion. She was under observation in ICU for 24 hrs. Her post-operative period was uneventful and was discharged on day 7. (Figure 1 A,B)

Mrs Y, 34 yrs female referred to ESIC PGIMSR Basaidarapur, in view of G2P1L1 previous LSCS with large cervical fibroid at 37+1 weeks of gestation. Her basic investigations were within normal limits. Obstetric Ultrasound revealed a large cervical fibroid of 9.4 X 9.6 cms which was also present in her last pregnancy but was smaller in size. Biometry was within normal limits with adequate liquor and fundo-posterior placentation. She was planned for CCS after high risk consent for hysterectomy and blood transfusions. She underwent elective repeat caesarean section.

Mrs Z, 32 years female referred to ESI PGIMSR Basaidarapur in view of large lower segment fibroid with pregnancy. She was G2P1L1 with 39+2 period of gestation with previous LSCS and large lower uterine segment fibroid (10*10 cms). Her vitals and all the relevant lab investigations were within normal limits and her ultrasound was performed which showed a large lower uterine segment fibroid on right side measuring 10*11 cms with fundo-anterior placentation. She was also planned for elective repeat caesarean section after high risk consent for classical caesarean section / hysterectomy (if required).

After arranging adequate blood products, a classical caesarean section with uterine artery ligation was performed and baby was delivered as breech. A large right lower uterine segment fibroid of size 10*10 cms was confirmed. Patient received 2 units of PRBCs and broad-spectrum antibiotics were continued for 10 days. Her postoperative period was uneventful. (Figure 1 D) 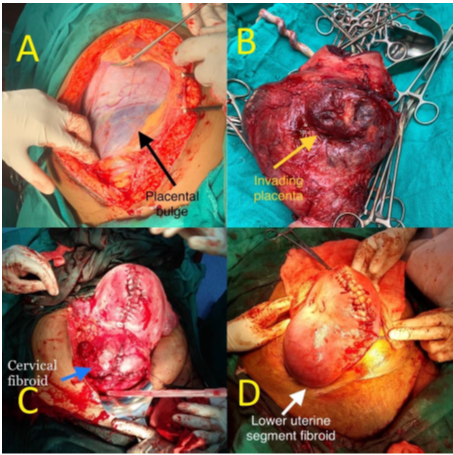 Here we have discussed three cases. One, a case of placenta accreta spectrum, two, a large anterior cervical fibroid and three, a large lower uterine segment fibroid all of which were managed through classical caesarean section.

In all these cases, a thorough preoperative assessment was done as this is the is most crucial step in management and planning of appropriate surgical technique to decrease the morbidity and mortality of the patient and the fetus.

Cervical fibroids in pregnancy are rare with a prevalence of <1%.1 Also fibroids can complicate pregnancy in any trimester as well postnatally. There are no specific guidelines how to manage cases of cervical fibroids. The risk to adjacent structures and especially risk of injury to ureters in these cases should always be kept in mind. Thus, a skilled surgeon with tertiary care management is to be considered in such cases.

In presence of placenta previa with previous caesarean section, accreta will also be noted in 24-67% of cases which increases with the number of prior uterine scars.

High index of suspicion for placenta accreta spectrum should be kept in women who present with previous caesarean section with low lying placenta. All women require follow up imaging if they present with placenta previa at 20 or more weeks of gestation. Mid pregnancy routine fetal anomaly scan should include placental localisation thereby identifying women at risk of persisting placenta praevia or a low-lying placenta.2 80-90% prenatally diagnosed PAS cases are managed in a better way surgically. Also, ultrasonography is an important tool for diagnosis of placenta accreta syndrome; one should not completely rely on it and should always consider a high suspicion if clinical findings favour the possibility of PAS.

These types of high risk cases should always be managed through multidisciplinary approach with adequate blood facilities in a tertiary care centre. Experienced obstetritions and anaesthesiologists should be involved in managing such cases.