Yadav, Chaudhary, and Malhotra: Uterine rupture at the fundus during labor: A case report

Uterine rupture at the fundus during labor: A case report

Uterine rupture is a rare but catastrophic complication seen in obstetrical practice. The most crucial predisposing factor is previous caesarean scar and it is generally being reported during labor in patients with scarred uterus. Although rare, rupture of an unscarred uterus is one of the most terrible obstetric complications, resulting in maternal and fetal jeopardy. Shoulder dystocia is one of the most difficult complications of labour that is unpredictable and therefore unpreventable. In neglected cases, grave maternal complications like obstructed labour and rupture of uterus can occur. Very rarely, the reverse, uterine rupture leading to shoulder dystocia can also occur. The present case is reported to emphasize the importance of early recognition of this condition. A 32 year old gravida 5 para 2 live 2 abortion 2 with 9 month period of gestation presented to labor room with shoulder dystocia, with history of fundal pressure. After delivery of head, pain subsided and the trunk failed to deliver. Her previous two deliveries were by normal vaginal delivery 8 years and 5 years back respectively. She had previous two abortions 6 years and 3 years back respectively. Both were spontaneous expulsion followed by dilatation and curettage. On examination, clinical diagnosis of rupture uterus was made and patient was taken up for laparotomy. On laparotomy, fetal body and limbs along with the placenta was seen lying in the abdominal cavity and head was in uterus. Baby of 2.34 kg was extracted as breech. A linear rupture of around 10-12 centimeter was present at fundo-posterior region. Uterus was repaired in 3 layers and bilateral tubal ligation was done. Patient was discharged on post- operative day 10 without any complications.

In women with high risk for uterine rupture, delivery must be conducted at tertiary hospitals where facilities for emergency caesarean is available. In these patients, if shoulder dystocia occurs, rupture of the uterus must be suspected as an underlying cause. Assisted fundal pressure during delivery can result in trauma even to the unscarred uterus and cause traumatic uterine rupture. Early diagnosis is vital if maternal morbidity is to be reduced.

Uterine rupture is defined as spontaneous tearing of uterus, that may result into fetus expulsion in the abdominal cavity. Rupture uterus is a rare entity with an incidence of 0.07% & often fatal complication with high incidence of fetal & maternal morbidity.1 It can occur in last trimester or in active labor. The most prevalent cause is dehiscence of previous scar, other factors include trauma, congenital uterine abnormalities, other uterine surgeries like myomectomy, external & internal cephalic version, excessive use of uterotonics, shoulder dystocia.2

Rupture of an unscarred gravid uterus is very rare and significantly catastrophic for both mother & fetus, with an estimated occurrence of 1 in 8000 to 1 in 15000 deliveries. Aside cesarean section, irrelevant prostaglandin and oxytocin use, vigorous fundal pressure, previous instrumental abortion & vacuum extraction delivery are the other risk factors for uterine rupture.3 Shoulder dystocia is one of the most devastating complications of labor that is unpredictable and that’s why unpreventable. In most of the cases, the cause is dystocia from the bony pelvis. The major burden of complications is borne by the fetus. In neglected cases, it result into grave maternal complications like obstructed labor and rupture of uterus. Very rarely, the reverse, uterine rupture leading onto shoulder dystocia can also occur.4 The present case is reported to emphasize the importance of early recognition of this condition We report a case of uterine rupture in a multiparous laboring patient who presented with shoulder dystocia.

A gravida 5 para 2 live 2 abortion 2 with 9 month period of gestation presented to labor room with spontaneous delivery of head 3 hours back, at a private hospital, after being in labour for 8-9 hours. After delivery of head, pain subsided and the trunk failed to deliver. Different manouvers were tried for the delivery of shoulders, but failed. Her previous two deliveries were by normal vaginal delivery 8 years and 5 years back respectively. She had previous two abortions 6 years and 3 years back respectively. Both were spontaneous expulsion followed by dilatation and curettage.

Shows picture of fundus taken from above and front 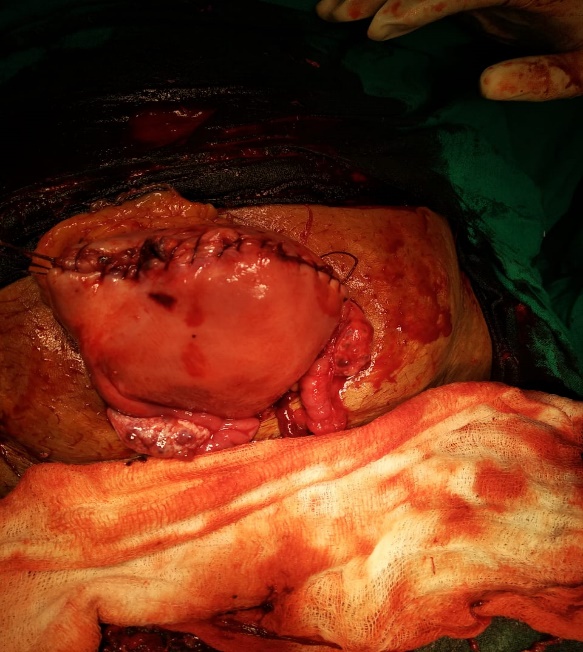 On examination, pulse rate was 140/min. and BP was 100/60 mm Hg. General condition of patient was average. Patient was pale and dehydrated. On per abdominal examination, it was distended and tender, with guarding and rigidity. Uterine contour could not be made out. On local examination, head was lying outside. Turtle neck sign present. Patient was already catheterized, urine was haemmorhagic and was only in tubings. Clinical diagnosis of rupture uterus was made and patient was taken up for laparotomy. Patient was given general anaesthesia. Abdomen was opened vertically, haemoperitoneum of 700ml. Fetal body and limbs along with the placenta was lying in the abdominal cavity and head was in uterus. Baby of 2.34 kg was extracted as breech. A linear rupture of around 10-12 centimeter was present at fundo-posterior region as shown in Figure 1. Uterus was repaired in 3 layers and bilateral tubal ligation was done. Abdomen closed in layers. Intraoperatively, 2 PCV and 2FFP and postoperatively 2 PRP were transfused. There was no postoperative complications. Patient charged on post-operative day 10.

Shoulder dystocia is defined as difficulty in delivery of shoulders after the delivery of head and it’s incidence is 1in 200. The interval between delivery of head and shoulder should be less than 60 seconds. Usually, anterior shoulder is impacted under pubic symphysis. Rarely, there can occur bilateral impaction, when posterior shoulder also gets impacted over sacral promontory. Shoulder dystocia can lead to birth asphyxia or IUD, brachial plexus palsy, fracture of clavicle or humerus. Many antepartum risk factors like anencephaly, maternal diabetes, macrosomia and intrapartum risk factors like precipitate labor, prolonged duration of labor and forceps delivery have been linked with shoulder dystocia.5 Yet it is impossible to predict shoulder dystocia. According to a report by the Confidential Enquiries into Stillbirths and Deaths in Infancy, 47% of deaths from shoulder dystocia were within five minutes of delivery of the head.6 That’s why shoulder dystocia should be promptly managed by a defined protocol, which consists of series of maneuvers that are used consecutively, based on it’s severity.7

Seldomly, a forceful uterine contraction can lead to delivery of head, but ruptures the uterus. This results, in expulsion of fetal trunk and shoulders outside the uterus. It fails to deliver shoulders & the trunk. Here, soft tissue of ruptured uterus is causing shoulder dystocia, and not the bony pelvis. Undiagnosed perforation during previous D&C can also cause weakening of uterine wall. Risk factors for uterine rupture include grand multiparity, induction of labor in previously unscarred uterus, uterine anomalies, inappropriate prostaglandin and oxytocin usage, previous instrumental abortion, obstructed labor, vacuum extraction and forceps delivery, vigorous fundal pressure, and intrauterine manipulations.3 In our patient, the most probable identifiable risk factors were grand multiparity, weakened uterus due to previous D& C and fundal pressure (as told by patient).

Fundal pressure is application of steady pressure on uterine fundus and is considered among the most controversial maneuvers done in second stage of labor. No confirmed benefit of this procedure has been documented but few adverse events have been reported.

In our case scenario, powerful uterine contraction and fundal pressure may have caused giving away of weakened wall at fundus. The shoulders were present high up i.e., above the cervix and not behind the pubic symphysis which suggested rupture of the uterus and shoulder dystocia being the result.

To conclude, Shoulder dystocia is one of the most dreaded complication of labor that is mostly unpredictable and hence unpreventable. Rarely, when such cases are complicated with uterine rupture, it must be recognized early to improve fetal survival rate. Assisted fundal pressure during delivery can result in trauma even in unscarred uterus and leads to traumatic uterine rupture. Early diagnosis is the key to decrease maternal & neonatal morbidity, otherwise both lives could jeopardise.

C Vangeenderhuysen A Souidi Uterine rupture of pregnant uterus: study of a continuous series of 63 cases at the referral maternity of Niamey (Niger)Med Trop (Mars)2002626158