Brown-Séquard syndrome is an incomplete spinal cord lesion characterized by hemisection injury of the cord. We present a case of pregnancy, delivery and postpartum course following this rare neurological condition. A 42-year-old woman presented with past history of idiopathic hemicord myelitis leading to right sided hemiplegia with decreased contralateral sensation of pain and temperature, consistent with Brown-Séquard syndrome, which was treated with steroids and Therapeutic Plasma Exchange. Thereafter, she had near-complete motor recovery and complete sensory recovery over the next 3months. Three years later, she presented to us at 37+2 weeks of gestation with residual hemiparesis with motor power grade of 4/5 in right upper and lower limbs. She underwent Caesarean section for breech presentation, which was done under general anaesthesia in view of prior spinal cord lesion. She was discharged for follow-up in Neurology outpatient clinic and physical rehabilitation. At follow up after 12 months of delivery, she had complete motor and sensory recovery. Management of spinal cord lesions in pregnancy and delivery requires specialist multidisciplinary care due to risk of medical and obstetric complications. This case demonstrates a rare scenario of a primigravida at term gestation with residual deficits of a past spinal cord lesion.

Women with spinal cord lesions pose unique challenges during pregnancy. Improved rehabilitative care and advent of assisted reproductive techniques has increased the number of such patients presenting for obstetric care. Depending on the completeness of the spinal cord lesions, these patients maybe at higher risk for medical complications like urinary tract infections, venous thrombosis, pressure sores and autonomic dysreflexia (AD) and obstetric complications like preterm labour and higher rate of caesarean section.1, 2

Brown-Séquard syndrome is an incomplete spinal cord lesion resulting from hemisection of the spinal cord. It presents with varying severity of ipsilateral motor weakness and loss of pain and temperature sensation on the contralateral side.3 As it is a rare entity, there is very limited literature on management of patients with Brown Sequard syndrome in pregnancy with only 2 such cases reported so far.4, 5

We report a case of a 42-year-old woman at 37+2 weeks of pregnancy with residual hemiparesis from a nontraumatic Brown Sequard syndrome which had occurred 3 years ago. The patient underwent caesarean section in view of breech presentation and had an uneventful course in the hospital. She was advised postnatal thromboprophylaxis and outpatient Neurology follow-up with physical rehabilitation.

A 42-year-old primigravida presented to us at 37+2 weeks of gestation for safe confinement, having conceived after assisted reproduction using In Vitro Fertilization-Embryo transfer.

She had a history of Idiopathic hemicord myelitis presenting as Brown-Séquard syndrome with a C7 AIS scale A lesion (American Spinal Injury Association Impairment Scale) diagnosed on MRI, 3 years back. She had presented with a history of multiple episodes of vomiting following which there was a sudden onset right sided weakness and numbness over the left side of the body.  Her bladder and bowel functions were normal. She did not have any history of trauma or medical comorbidities. On detailed neurological survey motor power was found to be of grade 0/5 in right upper and lower limb and there was reduced pain and temperature perception on the left side of the body below the level of lesion. The patient had spasticity with hyperreflexia and extensor plantar response on motor affected side. She was evaluated with a cervicodorsal MRI, which showed hyperintensity in cervical spinal cord from corticomedullary junction to the level of C6-C7, more towards the right side of the cord. Other differentials like cervical disc herniation, epidural hematoma, tumors and cystic diseases were ruled out on MRI. Cerebrospinal fluid (CSF) analysis ruled out infection as the cause.

She received Methyl Prednisolone pulse therapy and Therapeutic Plasma Exchange following which there was near complete recovery of neurological deficits over the next 3 months. She developed right femoral vein thrombosis for which she received therapeutic anti coagulation for 6 months. She followed up periodically for continued physical rehabilitation.

Three years after the neurological event, the patient conceived after assisted reproduction using In Vitro Fertilization-Embryo transfer using donor oocyte. She was booked and immunized in this pregnancy. Apart from the routine Iron, Calcium and Folic acid supplements she also received B complex vitamins. Routine antenatal care was given and fetal well-being was periodically monitored. Third trimester ultrasonograms and doppler measurements were found to be within normal limits. She received prophylactic low dose Aspirin from first trimester of pregnancy up to 37 weeks of gestation. She had no comorbidities or pregnancy related complications thus far.

She presented to us for the first time in this pregnancy at 37+2 weeks of gestation with residual right sided hemiparesis with muscle power of grade 4/5 in right upper and lower limbs. Deep tendon reflexes were normal. There was no sensory deficit. Obstetric evaluation revealed Breech presentation with reassuring fetal heart rate pattern.

A multidisciplinary team was consulted, consisting of a Maternal-fetal medicine specialist, Neurologist, Anaesthesiologist and Physical Medicine and Rehabilitation therapist. Patient was planned for an elective Caesarean section due to breech presentation with IVF pregnancy, under General anaesthesia. The section was uneventful and she delivered a healthy female baby. She was advised postnatal thromboprophylaxis with warfarin for a period of 6 weeks after delivery. She was asked to follow up regularly in outpatient clinic of Neurology department and to undergo regular physiotherapy. Postpartum period was uneventful. At 12 months of follow up after delivery, patient has no residual weakness and motor power is of the grade 5/5 on the right side, with normal reflexes. There is no sensory deficit on the opposite side. Figure 1 depicts the chronology of events that occurred in this patient. 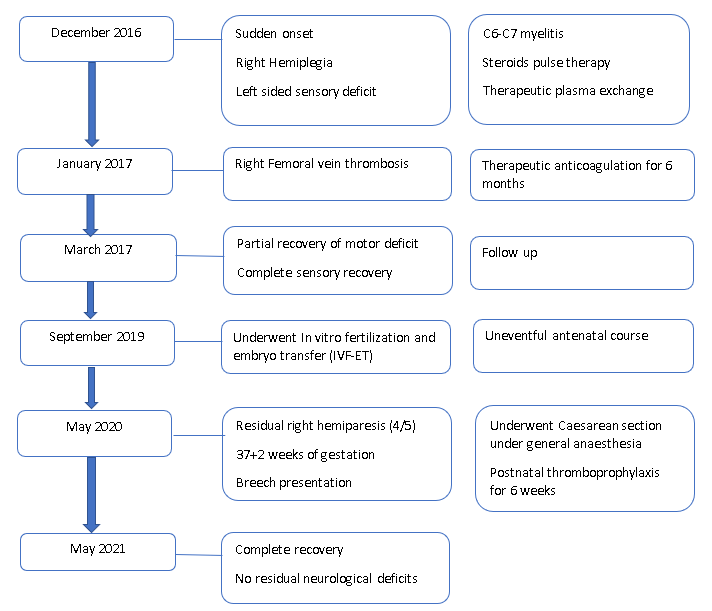 We report a case of a primigravida with past history of Brown-Séquard syndrome presenting at term gestation. Brown-Séquard syndrome is a type of incomplete spinal cord lesion characterized by hemisection of the cord, commonly in the cervical cord region.3 It presents with ipsilateral hemiplegia and contralateral anaesthesia. It is commonly of traumatic etiology. However, it can also occur due to non -traumatic causes like disc herniation, cervical spondylosis, tumors, multiple sclerosis, hematoma, infections and idiopathic transverse myelitis caused by infection-induced immune responses.3 The pure Brown-Séquard syndrome with hemisection of the cord is not often observed. A diverse clinical picture with features of hemisection syndrome and additional symptoms and signs is more common and this is known as Brown-Séquard–plus syndrome. Magnetic resonance imaging (MRI) is the modality of choice for evaluation of spinal pathology.6

Spinal cord lesions in pregnancy are considered high risk due to the various complications they may develop. Medical complications include urinary tract infections, pressure sores, reduced pulmonary reserve, venous thromboembolism, anaemia and autonomic dysreflexia.1, 7 Among these, urological complications like recurrent symptomatic lower urinary infections, pyelonephritis and urinary incontinence are the ones most frequently encountered during pregnancy. This can be attributed to neurogenic lower urinary tract dysfunction as a result of spinal cord injury.2

The mode of delivery and choice of anaesthesia need to be decided on a case-to-case basis taking into account the severity and type of spinal cord lesion and anticipated complications. In our case, after multidisciplinary discussion, we opted for caesarean section under general anaesthesia considering the patient’s obstetric (elderly primigravida, IVF pregnancy and breech presentation) and neurological background (residual hemiparesis).

There is insufficient evidence in literature on the effects of pregnancy on neurological status in Brown-Séquard syndrome. Mahieu et al. reported a case of spontaneous cervical extradural hematoma causing Brown-Séquard syndrome in a pregnant woman. She underwent caesarean section and immediate spinal surgical decompression following which there was complete neurological recovery within 48 hours.4 Liu et al. reported another case of a patient with a past Brown-Séquard syndrome who had an uncomplicated pregnancy and delivery but presented with lack of lactation on the affected side due to residual autonomic dysfunction.5 Table 1 summarizes the events described in the above two case reports in comparison to our case.

Treatment of Brown-Séquard syndrome primarily consists of physical therapy and rehabilitation. Management also includes treatment of the cause and prevention of complications. Steroids have a limited role in treatment except in immune mediated spinal pathology. Brown-Séquard syndrome requires long term neurological follow-up. But it has an excellent prognosis with 99% eventual functional recovery.3

Pregnancy in patients with Brown-Séquard syndrome is rarely encountered in routine obstetric practice. However, the implications of this condition on pregnancy, childbirth and puerperium can be diverse. Our case highlights the need for a multidisciplinary planned approach for management of such patients. Further studies with a greater number of patients are needed to optimize obstetric care in patients with Brown-Séquard syndrome.