Pandya and Patel: A study of comparison of effectiveness of letrozole (5mg) versus Clomiphene citrate (100 mg) for ovulation induction among infertile women

Anovulatory dysfunction is a common problem and is responsible for about 40% of female infertility and among causes; PCOS (polycystic ovarian syndrome) is the leading cause.

Clomiphene citrate is considered as the drug of choice for the first line treatment of anovulatory dysfunction for a variety of reasons. Clomiphene citrate has some side effects like multi-follicular development and cyst formation and resistance of clomiphene are areas of concern and desire for an effective alternative persists.

An aromatase inhibitor, letrozole, was introduced into infertility practice in the year 2000 and is regarded as a second line option, particularly in women with clomiphene resistance1, 2 and it has found acceptance in various clinical situations and the indications for use have expanded.3, 4

Aim & Objective: To compare the efficacy of letrozole and clomiphene citrate (CC) for ovulation induction in infertile women.

Results: Women who received letrozole had more cumulative live births than those women who had received clomiphene citrate (36 out of 50 [72%] vs. 28 out of 50 [56%]), without significant differences in overall congenital anomalies, there were no congenital anomalies. With letrozole as compared to clomiphene the cumulative ovulation rate was higher. Higher incidence of hot flushes was associated with a clomiphene, and letrozole was associated with fatigue and dizziness. Rates of other adverse effects were almost similar among these 2 groups. A significant difference in the follicular and endometrial development was evident among these 2 groups.

Conclusion: Compare to clomiphene, an aromatase inhibitor, letrozole was associated with higher live-birth and ovulation rates among infertile women. The results of the study demonstrated letrozole is superior to clomiphene citrate in the maintenance of endometrial thickness.

Millions of women of reproductive age are affected by infertility worldwide. In India approximately 8% of currently married women suffered from infertility. Most of them (5.8%) are secondary infertile.

For infertility, PCOS (Polycystic ovarian syndrome) is the most common female endocrine disease and a frequent cause.5 Characteristics of PCOS are anovulation, clinical or biochemical hyperandrogenism and presence of polycystic ovaries. 6 In the fertile age, it affects 5% to 10%,7, 8 while as per recent studies reporting even higher rates.9 Ovulation induction is the cornerstone for treatment of women with PCOS suffering from infertility, because about 80% of women with PCOS have anovulation or oligo-ovulation.10

Clomiphene citrate (CC) belongs to a selective estrogen receptor modulator drug classification, has traditionally been used as the drug of first-choice for ovulation induction or superovulation in women with PCOS.11 CC has an anti-estrogenic effect, which results in estrogen receptor (ER) depletion, and has long half-life; therefore it accumulates in the body causing long lasting ER depletion.12 It has been a relatively effective medicine, in general. CC lasts for a long time in the body and may due to it have an adverse effect on cervical mucus and uterine lining, such as endometrial proliferation leading to thinning of endometrium. The endometrial thickness is one of the most important factors affecting pregnancy. The pregnancy rate can be very low, if endometrial thickness is less than 6-8 mm.13 Clomiphene citrate is one of the treatment modalities which reduce endometrial thickness,14 so we should adjust endometrial thickness and proliferation during induction of ovulation to avoid this. In such groups of patients, such as women with PCOS, do not respond well to clomiphene citrate.

Letrozole is an aromatase inhibitor, has also been recommended as a first-line drug therapy for improvement of the fertility outcomes in women with PCOS.5, 15 Aromatase is an enzyme which is responsible for the production of estrogen in the body. Letrozole works by inhibiting aromatase by completely binding to it, which results in a reduction of estrogen biosynthesis in all the tissues.16 Mechanism of action of the letrozole is depicted in Figure 1. It has a short half-life, thereby it rapidly eliminated from body within 42 hours, with less risk of ovarian hyperstimulation.17 On the other hand, clomiphene citrate blocks estrogen receptors. As a result, pituitary gland produces more of hormones which are needed to stimulate the ovaries. FSH and LH, these hormones can cause the development of ovulation in women who are anovulatory or increase the number of eggs developing in ovaries of women who already ovulate.18 Letrozole offers significantly better endometrial response compared to clomiphene citrate.

Letrozole, clomiphene citrate like fertility drugs can be used to induce an ovum to develop and to be released in women who are not ovulating on their own. This is known as ovulation induction. For increasing the chances of pregnancy in women who are already ovulating, these drugs can be used; which is known as superovulation. As per study done by Wang et al., the network meta-analysis showed that letrozole is the only treatment showing a significant higher rate of live birth, as compared with CC alone.19 While ovarian stimulation in women with an unexplained infertility aims to achieve multi-follicular growth, in women with an anovulation who are undergoing ovulation induction, mono-follicular growth is thought to be sufficient.20 In order to study the effectiveness and safety of different ovulation induction protocols with less side effects and higher pregnancy rates in women with PCOS treated with clomiphene citrate and letrozole to assess the impact of mono- versus multi- follicular growth, we compared the live pregnancy rates among women with who had ovulation induction with CC and letrozole in a Scientific Research Institute, Surendranagar, Gujarat, India.

Here are some recommendations of different societies for letrozole as a 1st line treatment option in ovulation induction: As per American College of Obstetrics and Gynaecologists21 (2016) society, letrozole should be considered as 1st line therapy for OI in patients with PCOS and BMI >30 because of increased live birth rate(LBR) compared to clomiphene citrate; as per Australian National Health and Medical Research Council (NHMRC) guidelines22 (2015), letrozole, under caution, could be offered as pharmacological treatment for OI indicated for infertile anovulatory women with PCOS with no other infertility factors.

Mechanism of action of Letrozole 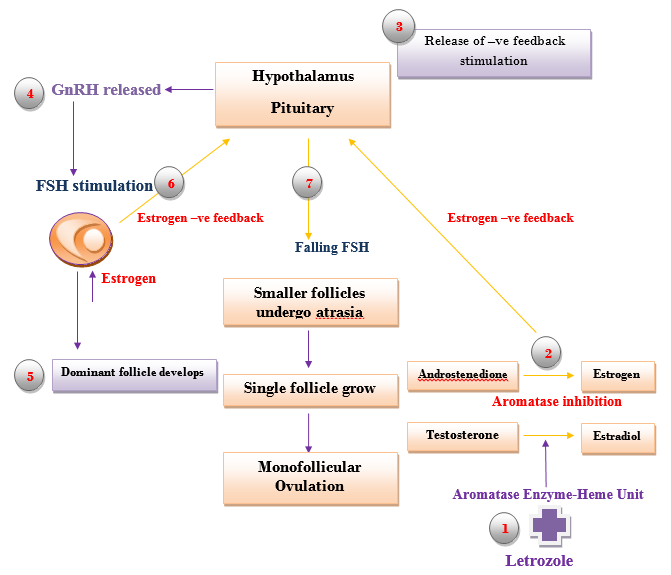 We previously reported the trial rationale and a detailed protocol summary of study participants, as well as study methods and the full baseline characteristics of the study participants. Letrozole, an aromatase inhibitor, was under an Investigational New Drug application (number 101,671) to the Food and Drug Administration (FDA). Enrolment began in October 2019 and was completed in October 2021. All the data entry, data management, and analyses are performed at the Scientific Research Institute, Surendranagar, and Gujarat, India.

A total of 100 infertile women of 20 to 39 years age who had no major medical disorders and who were not taking confounding medications (other fertility drugs, sex steroids, insulin sensitizers, as described in study protocol), their male partners, and their neonates also participated in the study. Additional eligibility criteria include a normal uterine cavity, or evidence of an intrauterine pregnancy within previous 3 years; a male partner with a sperm concentration of at least 14 million/millilitre, according to World Health Organization cut-off points with the documented motility, in at least one ejaculate during the previous year and a commitment on the part of women and their partners to have a regular intercourse during the study with the intent of pregnancy.

Total 100 women were randomly assigned and divided into 2 groups of 50. 1 group was given clomiphene citrate (100 mg daily) and another group was given; letrozole (5 mg daily), started from day 3 to day 5 of the menstrual cycle and up to 5 consecutive days (Table 1).

This is followed by giving Estradiol Valerate 4 mg on the 12th day of menstruation until 16th day of menstruation in both groups. Couples were instructed to have a regular intercourse two to three times a week. Participants who conceived were followed until a viable intrauterine pregnancy was observed (on ultrasonography- fetal heart motion visualized) and prenatal care given to them. Through the review of maternal and infant medical records, the outcomes were tracked.

Characteristics of the patients

A total of 100 infertile women were randomly assigned to treatment group and they were divided into 2 groups; the 2 groups were well matched at baseline. Study participants are of age 20 to 39 years. Study began in October 2019 and was completed in October 2021.

Outcomes regarding the ovulations, live birth and pregnancy

The live birth rates after cycles induced with clomiphene citrate and letrozole were 56%, 72% respectively. Multiple pregnancies were recorded in 2 women who had given clomiphene citrate in whom 1woman had twin pregnancy and another woman had triplet pregnancy; both women are delivered at term and babies are healthy; there were no maternal or neonatal complications present.

Two adverse events related to ovarian-cyst formation occurred during infertility treatment: one with letrozole (a ruptured corpus luteum cyst) and one with clomiphene (ovarian cyst). Clomiphene citrate was associated with a significantly higher incidence of hot flushes and letrozole was associated with significantly higher incidences of fatigue and dizziness. The number of patients reporting side effects who had given letrozole are 3 and who had given clomiphene citrate are 6.

The most common neonatal complications were jaundice, respiratory distress syndrome, a condition requiring hospitalization for more than 3 days, and intrauterine growth restriction, without significant differences between treatment groups.

Since many years, clomiphene citrate is considered to be the first line therapy in women with infertility for ovulation induction. Clomiphene citrate has antiestrogenic effect as it induces prolonged estrogen receptors depletion with an estrogen target tissues especially endometrium. Several studies showed that clomiphene has a deleterious effect on endometrial development resulting in endometrial thinning, luteal phase effect, decreased uterine flow, and implantation failure. So we added Estradiol Valerate 4 mg on the 12th day of menstruation until 16th day of menstruation per oral to prevent detrimental effects of clomiphene on the endometrium.

In our study we used letrozole and clomiphene citrate for ovulation induction has been designated by FDA as pregnancy category X (although clomiphene is approved for ovulation induction). The live-birth rate was higher with letrozole than with clomiphene citrate among women with infertility and polycystic ovary syndrome in our study. In our study, we did not require a lifestyle intervention before enrolment; although such interventions are recommended by experts, but there is currently no evidence from high-quality clinical trials that they improve pregnancy outcomes in obese women.27

An aromatase inhibitor, letrozole, as compared to clomiphene, was associated with higher live-birth and ovulation rates among infertile women. The results of the study demonstrated letrozole to be superior to clomiphene citrate in the maintenance of endometrial thickness.

Clomiphene citrate has some drawbacks; including its overall poor efficacy (56% rate of live birth), a relatively high multiple pregnancy rate, and an undesirable side effect profile which includes mood changes and hot flushes. The important public health goal is to develop the effective, simple, and safe treatments for infertility.