Aim: To assess the obstetric and medical risk factors in patients with bad obstetric history (BOH) and outcome of pregnancy in case of BOH.

Materials and Methods: A prospective cross-sectional study was conducted in Government maternity hospital, Tirupati for a period of 1 year from December 2017 to November 2018. All pregnant women who were fulfilling inclusion criteria of BOH, as study group and all possible variable were compared with control group, who got selected randomly from the rest of deliveries. And analysed the results in terms of sociodemographic factors, risk factors, pregnancy complications, mode of delivery, maternal and foetal outcome.

Results: Of 102 pregnant women in BOH, 76.5% were in age group between 21-30yrs, and 14.7% in age group >30yrs. Primary Recurrent pregnancy loss (RPL) was 51% and that of secondary recurrent pregnancy loss was 49%. History of hypertensive disorders including preeclampsia, eclampsia and chronic hypertension, noted in 11.8% cases, which was higher than previous studies, indicating changing trends in incidence. In foetal complications IUGR (0% vs 9.8%, p=0.026) and IUFD (0% Vs 7.8%, p=0.05) were more in BOH group and statistically significant also. Even though the maternal complications were more in BOH group, there was no statistical significance (P=0.075). Among the various causes of RPL found in the present study, endocrine causes were seen in 12.7%, Anatomical causes were found in 11.8% and in about 63.7% cases no definite cause was found and aetiology was unexplained.

Conclusion: Present study, supporting the change in definition of recurrent pregnancy loss from 3 consecutive losses to 2. So early evaluation and with appropriate interventions in most of couples outcomes were fruitful.

When evaluation of women for recurrent pregnancy loss is done, an underlying contributing factors can be identified in 40-50%3 in couple where no underlying problem is found the chances for a successful pregnancy can typically be in 50-70% range.3 If a contributing factor is found & treated, the prognosis for live foetus is calculated as 80%.3 If couple had a normal pregnancy & delivery previously prognosis tends to be better.3

The evaluation to analyse causes for miscarriage will typically involve inspection of the macro and the micro environment within the uterus. If a pregnancy does occur, the endometrium must develop optimally to provide ongoing attachment and nourishment for the developing pregnancy. Any process, which interferes with normal embryo-endometrium interaction can lead to pregnancy failure. 3 Acquired problems could include polyps, fibroids and adhesions, which even if small, could interfere with an otherwise normal pregnancy. Congenital uterine problems include the septate uterus, bicornuate uterus or a T-shaped uterus related to in-utero diethylstilbesterol (DES) exposure).3

A significant immunologically mediated contributor to pregnancy loss is the anti-phospholipid antibody (APLA) syndrome. An otherwise normal pregnancy can miscarry at any stage of pregnancy. Women with APLA are at higher risk in later pregnancy of pre-eclampsia, foetal growth retardation and foetal demise.3 Gestational diabetes mellitus (GDM) is defined as abnormal glucose tolerance during pregnancy. GDM can be associated with significant morbidity and mortality in the foetus and new-born.

In this study we aimed to identify treatable risk factors & medical conditions associated with bad obstetric history. And to measure the perinatal outcome after the interventions and identify other correctable social, ethical and environmental causes like maternal obesity, conceiving at old age etc. for further improvement in outcome.

A prospective cross-sectional study was conducted in Government maternity hospital, Tirupati for a period of 1 year from December 2017 to November 2018. Institutional ethical committee clearance was taken. In this study all BOH pregnant women attending OPD/IPD, meeting inclusion criteria of women aged 18 to 44 years with history of at least two or more miscarriage of less than 20weeks gestation, still births, IUFD and neonatal deaths were evaluated. Women with induced miscarriages, who does not given consent were excluded. A detailed history of pregnant women like maternal age, parity prior obstetric history, co-existing medical, surgical conditions, family history of BOH, current obstetric history were noted through a pre-structured proforma and thorough clinical examination was performed. Relevant Investigations were done. And all possible variable were compared with control group, who got selected randomly from the rest of deliveries. And analysed the results in terms of sociodemographic factors, risk factors, pregnancy complications, mode of delivery, maternal and foetal outcome.

In these patients, the feto maternal outcome were studied along the following lines-

During study period, 102 BOH cases were included in the study and were compared with control group of 102 cases, who got selected randomly from rest of 12,238 deliveries in various aspects and results were analysed as follows.

Table 1 shows, there was statistically significant difference between two groups in terms of age distribution (P=0.018) and birth weight (P=0.039). At the time of inclusion in the study, 19.6% in control group and 94% in BOH group were belongs to ≥G3. In BOH group as patients experienced previous pregnancy loss they belonged to higher gravida with max gravida of G9.

Comparison of characteristics between two groups

Table 2 shows, in the present study, there was almost equal distribution of the patients among Primary RPL group (51%) i.e. these patients did not have any successful previous pregnancy, and secondary RPL group(49%) i.e. those who had at least one successful past pregnancy.

Distribution of cases according to type of recurrent pregnancy loss

Comparison between BOH group and control group in complications

Regarding mode of delivery, there were more LSCS (39.2% vs 22.3%) in BOH group compared to control group. Mean birth weight in BOH was 2.54kg and in control group it was 2.82kg, which was statistically significant (P=0.039) in comparison with control group. This indicating that BOH group was more likely to deliver low birth weight babies.

Comparision of perinatal outcome in boh group and control group.

Figure 2 shows, even though the maternal complications were more in BOH group, it was not statistically significant (p=0.075). 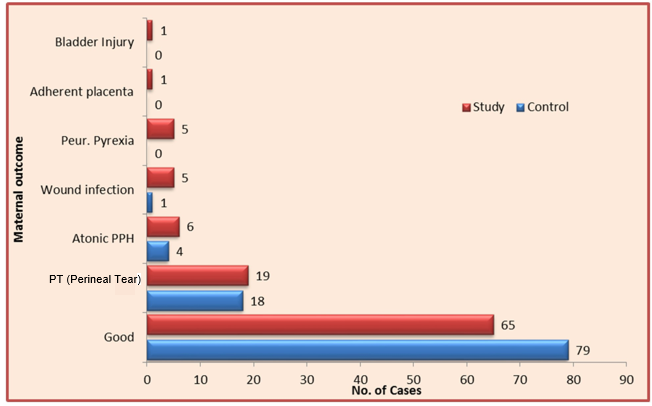 Incidence of thick meconium liquor in BOH group was 20.6% and in control group was 11.8% and there was no statistical significance (P=0.127).

Number of miscarriages vs. foetal outcome in BOH group

Table 5 shows, There was no statistical significance (P=0.388) in foetal outcome based on previous number of abortions.

As per reviewed literature, recurrent pregnancy loss (RPL), also referred to as recurrent miscarriage or habitual abortion, was historically defined as 3 consecutive pregnancy losses prior to 20 weeks from the last menstrual period. American society for reproductive Medicine (2013)4 now changed definition of Recurrent pregnancy loss as two or more failed pregnancies confirmed by sonographic or histological examination. Current study was also in favour of changed definition, as there was no statistically significant difference in foetal outcome in patients with 2 and 3 miscarriages (83.3% in >A2 and 94.4% in >A3) (Table 5). The results were similar to the study done by Arora M et al,5 in which the number that delivered were 47% in the group with 2 miscarriages and 42.8% in the group with 3 miscarriages, which was not statistically significant.

Spontaneous conception noted in 89.2% (91) BOH cases. 9.8% (10) cases conceived only after ovulation induction and one case had IUI treatment. In post induction cases of BOH group, seven cases delivered term babies, two had preterm but alive issues and only one case got aborted of unexplained reasons.

Among various risk factors preeclampsia (8.8% vs 19.6%, p=0.03) and preterm delivery (4.9% vs 13.7%, p=0.04) were more in BOH group than in control group and statistically significant also. It was in consistence with Singh G et al study3 in which, preeclampsia (20.25% vs 5.33%, p<0.01) and preterm deliveries (17.72% vs 6.33%, p<0.01) was found a statistically significant factor in BOH group. Hypertension with proteinuria leads to reduced plasma volume there by supply of nutrients to the growing foetus resulting in higher still births and preterm labours leading to prematurity and neonatal deaths. History of hypertensive disorders including preeclampsia, eclampsia and chronic hypertension, noted in 11.8% cases, which was higher than previous studies. It was 1.1% in study by Bhattacharya et al,7 4% in Pradhan T et al6 study and 7.3% in the study by Jivraj et al,8 indicating changing trends in incidence (Figure 3). 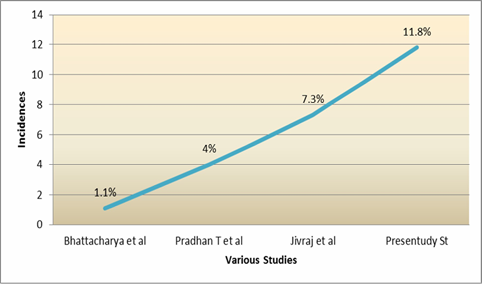 APLA syndrome are frequently associated with a history of repetitive foetal deaths.3 Treatment given for APLA syndrome was daily low dose aspirin and heparin during pregnancy. out of 6 APLA cases, only one case got spontaneous abortion. The incidence of good foetal outcome among them is 83%.

Seven patients presented with cervical incompetence, which were diagnosed both by previous preterm history and ultrasound findings, with cervical length <2cm and funnelling. In them six cases treated with mc Donald’s cervical stitch and removed at 36-37wks gestation. Five cases delivered alive babies at term but one case presented with preterm PROM, and delivered dead baby of 1kg. one case out of 7 cases, presented with incomplete abortion at the time of diagnosis.

The incidence of uterine anomalies in present study is 4.9%(5), it was in consistence with Pradhan T et al.6 study, in which incidence was 5.7%. Out of 5 cases, 2 cases were sub septate uterus, one was septate, one was arcuate and one was didelphis uterus. Four cases diagnosed at routine ultrasound. Uterine didelphis case only diagnosed at the time of delivery as patient presented to our institute in active phase of labour with IUFD and adherent placenta which was removed under short general anaesthesia. Out of remaining four cases, one patient delivered at term. Two patients had preterm labour and one got aborted.

GDM complicating pregnancy incidence in present study was 4.9%(5). All cases managed with inj. Insulin with satisfactory glycaemic levels. One case complicated with preterm delivery. Remaining four cases reached term and one case delivered by normal vaginal delivery and three by LSCS. Thus indicating increased incidence of LSCS in this group.