Ellian, Bhavya H U, and Doppa: A retrospective analysis of clinical profile of patients with cancer cervix in a rural medical college in Karnataka

Context: Cancer cervix is most common cause of cancerous deaths in females especially in developing countries. The pre-invasive stage of cervical cancer lasts for a long period and a small proportion progresses to an invasive lesion. In Indian set up, majority of the patients are presenting with an invasive lesion.

Aims: To describe the clinical profile of patients presented with cervical cancer and to describe various treatments received by those patients.

Materials and Methods: The present study is a retrospective observational study done on confirmed cases of carcinoma cervix who attended rural medical college in Karnataka. Clinical records of the patients, who presented between November 2019 and November 2020 and were diagnosed with cervical cancer, were retrieved. The data related to demographic and clinical variables like age, socioeconomic status, education, symptoms, clinical staging, treatment and histopathology report were recorded. Data collected were entered in Microsoft Excel Office 2007and data analysed. Data were presented using descriptive statistics. The data was expressed in the form of frequencies and percentages

Results: A total of 30 patients with the median age of 46 years were studied. Most common presentation was post coital bleeding (40%) followed by white discharge per vagina in 33%. Majority were under low socioeconomic status (70%). 60% presented in stage II and 30% in stage I. Chemoradiation was treatment of choice in 60% followed by surgery in 33% and 7% were lost to follow up. On histopathology, majority had squamous cell carcinoma (70%).

Conclusions: The appropriate management of Cervical intraepithelial neoplasia(CIN) can prevent invasive cervical cancer. In this study most of them presented in advanced stage which could have been prevented with the regular screening and awareness among women in the reproductive age group.

The pre-invasive stage of cervical cancer lasts for a long period, and only a small proportion of cervical intraepithelial neoplasia (CIN) progresses to an invasive lesion. The appropriate management of CIN can prevent invasive cervical cancer.4 High incidence and mortality rates continue in developing countries due to the lack of screening programmes.5 Over 80% of women with cervical cancer continue to be diagnosed at an advanced stage, which is significantly associated with poor prognosis in developing or less developed countries.6

Incidence of invasive cancer of cervix remains high in our country due to illiteracy and low socioeconomic status among majority of population. Most of them will be asymptomatic in early stages and due to lack of adequate screening for carcinoma cervix in rural areas they present at an advanced stage of malignancy. Add on to this, many superstitious beliefs and due to shyness, patients are unable to tell their problems. So they come to hospital when symptoms become unbearable with advanced stage of cancer of cervix. Though the situation in India is improving, there still exists a disparity between the availability of quality cancer care between the rural and urban centre. The present study was undertaken in a rural area to evaluate the current clinical profile and management of cases of carcinoma of cervix attending tertiary care hospital.

The present study is a retrospective observational study done on confirmed cases of carcinoma cervix who attended rural medical college in Karnataka from November 2019 till November 2020 for a period of one year after obtaining institutional ethical committee clearance. Patient's medical records were obtained and details of demographic characteristics including the socio economic status calculated by modified Kuppuswamy scale, chief complaints and related history, complete clinical examination and haematological, biochemical and radiological investigation reports before the actual treatment plan and during treatment were noted and analyzed.

Data of the histopathological diagnosis was obtained from the Department of Pathology in all the cases. After diagnosis of invasive cervical cancer, all of the cases had been staged according to International Federation of Gynecologists and Oncologists (FIGO) staging system. Depending on the FIGO staging, patients were managed according to the hospital protocols. The patients presented in early stage (Stage I and IIA) were managed by radical surgery in our centre. The patients in advanced stage (Stage IIB onwards) were referred to oncocentre for chemoradiation.

A total of 30 Cancer cervix cases were diagnosed in 1 year duration from November 2019 till November 2020 at our centre. Median age of the study group was 46 years with an age range of 32-66yrs. Majority were in the age group of 40-50 years i.e. 53.30%, followed by 20% in the age group of 30-40 years. Youngest age of presentation was 32 years of age and eldest was 66 years old. Most of them belonged to lower socioeconomic class (80%) whereas the rest 20% belonged to middle class. 80% of the patients were multiparous. Majority (i.e. 60%) of the patients were illiterates whereas 20% had primary education and remaining 20% studied till secondary school. The demographics of study group are enumerated in Table 1.

All the patients were staged clinically according to the staging system of the International Federation of Gynecology and Obstetrics (FIGO) as shown in Table 2. In this study it was observed that 20(66.60%) presented in advanced stage (IIA, IIB, III) of cervical cancer at the time of diagnosis while only 10 (33.30%) cases were diagnosed at early stage of cancer. None of them had undergone a prior cervical cancer screening.

When the histopathology reports were analyzed for all 30 patients, majority of the cases i.e. 22(73.30%) had squamous cell carcinoma (SCC), 6 of them had adenosquamous carcinoma (20%). Only 2 patients had adeno carcinoma (6%) and they presented at a younger age. Among 36% of the patients with SCC, the tumour grade was not known while it was a high, intermediate and low grade in 27%, 19%, and 18% patients respectively as shown in Figure 2.

Out of 30, 10(33.30%) underwent Wertheim’s radical hysterectomy as they had presented in early stage (stage IA+ stage IB + stage IIA). 18 (60%) out of 20 patients with advanced stage of disease were advised chemo radiation and referred to nearby Oncocentre. 2 of them (6%) with stage IIB (according to FIGO) did not receive any form of treatment at our centre and were lost to follow up. Distribution of study population as per the management is given in Figure 3.

The demographics of study population

Distribution of the patients as per FIGO staging at presentation

Distribution of patients as per the presenting symptoms 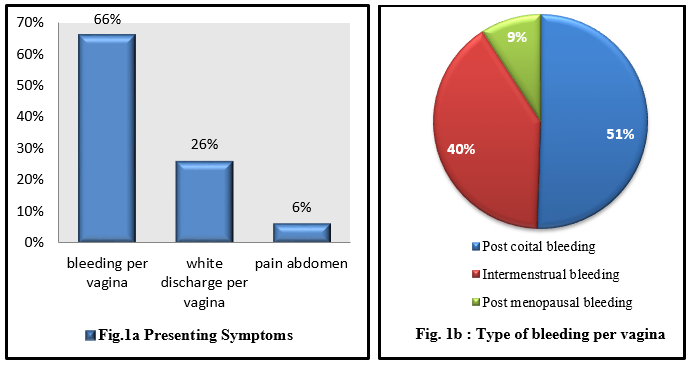 Distribution as per histopathology

Distribution of patients as per management 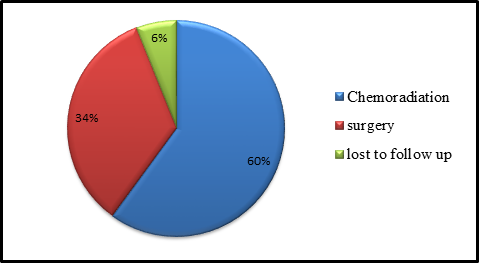 Cervical cancer is the leading genital cancer among women in our country. This high prevalence might be a reflection of the lack of an organized cervical cancer screening program in our environment compared to other countries. This is also the observation of other researchers.7 Our study showed similar results.

In the present study, maximum numbers of cases were in the age group 41-50 years followed by in the age group 51-60 years. The mean age of the cervical cancer case was 46 years and median age was 57.54 years. Similar studies conducted by Umate P et al, Kumari A et al and Kaverappa et al reported that maximum number of cervical cancer cases were from the age group 40-50 years followed by the age group 51-60 years.1, 8, 9 The findings of the above studies are comparable with the findings of present study. According to the Surveillance, Epidemiology, and End Results Program(SEER) statistics, most women with cervical cancer are identified before the age of 50. As the cervical cancer progresses slowly from precancerous lesions to advanced cancer, the incidence increases at about ages 35 to 40 and reach a maximum in their 50s and 60s.

In our study, 80% of the patients were multiparous. Similarly study by Chauhan R et al also found that 70% of cervical cancer patients were multiparous women.10 High parity has long been suspected of being associated with an increased risk of cervical cancer. Munoz et al found a direct association between the number of full-term pregnancies and squamous-cell cancer risk: the odds ratio for seven full-term pregnancies or more was 3·8 compared with nulliparous women.11 80% of the patients in the present study were from poor socioeconomic status. Similarly study by Kumari A et al also showed 85.13% were of the poor socioeconomic strata of the society with 99% being married.8

In the present study, most common symptom was per vaginal bleeding in the form of post coital bleeding, post menopausal bleeding and inter menstrual bleeding followed by white discharge per vagina and pain abdomen. Similar presentation was reported in the studies conducted by Kaverappa et al, Umate P et al. and Swamy M N et al.1, 9, 12

Majority of our patients (66.60%) presented in an advanced stage of the disease at the time of diagnosis while remaining cases were diagnosed at early stage of cancer. None of them had undergone a prior cervical cancer screening. The prevalence of late stage at presentation to the hospital among patients with cervical cancer has been reported to be 98% from Zaria, Nigeria, 81% from Nepal and 80% from Gujarat Cancer and Research Institute, India.13, 14, 15 Because of various factors like socio economic status, technical issues and manpower constraints cervical cancer screening is not being used widely in India. Rural residence with low level of female literacy, poverty and ignorance about health also lead to delayed referral to cancer centers.

In our study, Squamous cell carcinoma (SCC) was the most frequent histopathology reported and Adenocarcinoma was reported in few numbers of cases. This was comparable to the studies conducted by Kumari A et al and Nandi M et al who showed the same pattern.8, 16 In India, 85-90% of cervical cancer cases are SCC and human papillomavirus (HPV) 16 is the most prevalent type among them which alone accounts for 70-90% of cervical cancer, while the occurrence of HPV18 varies from 3-20%.17, 18

In this study, most of the cases presented as new cases, i.e. they had not received any prior treatment. As majority of them presented in the advanced stage, they were referred for chemo radiation and those who presented at an early stage underwent surgery at our hospital. This was comparable with studies done by Singh R et al, Nandi M et al at different settings showed similar results.16, 19 The follow-up data of our study were not adequate; hence, the long-term survival results could not be presented in the study.

Patients presenting in early stage of carcinoma cervix can be managed with surgical management whereas in advanced stage they require more invasive treatment which will be associated with increased morbidity. The present study highlights the risk factors for carcinoma cervix like low socioeconomic status, multiparity and low education status. Improvement is needed in the areas of economic resources. In developing countries like India more focus is required in changing culture and strict implementation of more organized screening programs in all the women of reproductive age group to detect more cases in premalignant phase.

We are grateful for the clinical support and encouragement by Department of Obstetrics and gynaecology. We also acknowledge the Medical records staffs for facilitating access to records.