Pulakhandam, Chaudhary, and Annapoorna: Maternal and perinatal outcomes of pregnancies complicated by cardiac disease at a tertiary level hospital

Introduction: Heart disease in pregnancy is one of the leading non-obstetric causes of maternal mortality and is the leading cause of maternal intensive care unit admissions in the world.

Objective: To study the prevalence of heart disease in antenatal mothers and fetal outcome with obstetric management.

Materials and Methods: The presence of comorbidities and the occurrence of obstetric, fetal, and cardiovascular complications during delivery among women with heart disease hospitalized for delivery were studied in 35 women at GSL Medical College, Rajahmundry for a period of 1 year from 01/01/2019 to 1/1/2020

Results: Over a period of 12 months, 35 subjects were recruited. During this period, there were 5005 deliveries. The majority of women were aged between 20-25yrs and were unbooked cases belonging to NYHA class I or II. Cesarean section and operative vaginal delivery were more common. Despite the multidisciplinary approach, 3 women succumbed to the disease of which one was a case of severe rheumatic heart disease with valve failure, the second was a case of postpartum cardiomyopathy and the third was a case of severe pulmonary arterial hypertension. Fetal outcome in cardiac patients is usually good and only a little different from those patients who do not suffer from heart disease.

The maternal mortality rate in women with cardiac disease is 7% and morbidity is 30% during pregnancy in India.2, 3

Disease pattern varies widely when developed and underdeveloped countries are concerned. In the western world, the incidence of RHD has declined. Congenital heart disease along with ischemic heart disease have a higher prevalence. This could be due to increasing age at marriage and an increased proportion of women with treated congenital heart disease entering reproductive age and also the near eradication of rheumatic fever and sequelae owing to improvement in living conditions and early detection of the disorder.

Cardiomyopathies and congenital heart block are rare but represent severe causes of cardiovascular complications in pregnancy. Peripartum cardiomyopathy (PPCM) is the most common cause of severe complications.7

In India, heart disease is diagnosed mostly in pregnancy for the first time, when increased demands on the heart trigger symptoms and unmask cardiac disease.9, 10

Any mild symptoms like chest pain, syncope, breathlessness, palpitations, pedal oedema and diastolic murmur should be considered seriously as it may be physiological in addition.

The functional capacity of the heart is assessed by investigations as electrocardiography (ECG), echocardiography, oxygen saturation and complete blood examination.

Anemia and pre-eclampsia which are commonly seen co-morbidities in India can precipitate heart failure leading to worsening maternal condition.

As part of these discussions, pregnancy-related complications should include those related to the pregnancy, as well as potential late adverse maternal cardiac outcomes, and the potential for fetal prematurity and its consequences. In addition, attention to discontinuation and possibly replacement of teratogenic medications should take place.

The present study is proposed to study the presence of comorbidities and the occurrence of obstetric, fetal, and cardiovascular complications during delivery among women with heart disease.

This prospective cohort study was carried out among 35 cases of cardiac disease in pregnancy receiving tertiary care in the department of Obstetrics and Gynecology in GSL General Hospital over 1 year from 01/01/2019 to 1/1/2020 including booked and unbooked emergency cases.

All pregnant women with congenital or acquired heart disease or those women diagnosed with peripartum cardiomyopathy were enrolled. Women referred for termination of pregnancy were excluded.

Functional grading was made according to the criteria of NYHA classification. 13

Class I: Patients with cardiac disease but without resulting limitation of physical activity. Ordinary physical activity does not cause undue fatigue, palpitation, dyspnea, or anginal pain.

A thorough clinical examination was done to find out the type of cardiac lesion and any signs of heart failure. All relevant investigations were done including ECG and echocardiography and they were evaluated clinically by both obstetricians and cardiologists. The routine obstetric examination was done. The patients were advised regular antenatal checkups along with cardiologist consultation.

Women were advised rest, iron and folic acid supplementation, explained importance of avoidance of infections, and an early visit to the clinic if there is any deterioration of health condition. Management was planned as a joint approach by a cardiologist and obstetrician according to the condition of the patient, NYHA functional status, and type of cardiac lesion, cardiovascular stability, and duration of pregnancy and viability of the foetus.

Women with NYHA classes I and II were admitted to the hospital at 36 weeks.

After delivery, the patient was assessed for well-being and cardiac and obstetric complications.

All patients were given infective endocarditis prophylaxis for seven days.

All patients were hospitalized for five days post-natally for antibiotic coverage. Newborns of mothers with congenital heart disease were examined for the inheritance of the disease.

Adverse outcomes during the antepartum, peripartum and postpartum period were classified as:

Collected data were entered into a Microsoft Excel spreadsheet and were analyzed. Comparison of the maternal outcome amongst NYHA functional class, and according to booking status and prior surgical intervention for heart disease was made by applying chi-square test. P-value < 0.05 was considered as significant.

Of the total cases, eleven (31.42%) were multipara, remaining were primigravida.

Most patients were unbooked, 30(85%)and 5(15%) were booked. This indicates the lower awareness and non-compliance with medical treatment even with existing heart disease. The majority of patients did not have regular antenatal checkups and cardiology OPD visits.

Maximum number of patients belonged to NYHA functional classes I and II 90(%), and only10(%) from classes III and IV.

The mean gestation age of terminating pregnancy was found to be 36wks ±5 days.

Depicting the distribution of heart disease.

Among rheumatic heart diseases, mitral regurgitation 9(50%) was most common. Multiple cardiac lesions were present in 8(22.8%) pregnancies. Among women with congenital heart disease, atrial septal defect 7(53.8%) was the most common lesion.

During pregnancy, cardiac surgery was performed on two women. Both suffered from symptoms not controlled by medical management. Balloon valvuloplasty was done for both with uneventful surgical outcomes.

Another 5(14%) entered pregnancy with prior mitral valve replacement. All of them had anti-coagulant therapy.

About 34.2% of the cardiac lesions were surgically corrected.

Among obstetrics co-morbidities hypertensive disorders of pregnancy 5(gestational hypertension 3, preeclampsia 2(14%) were most commonly seen. Gestational diabetes was seen in 2(5.7%),

Anemia 7(20%) and hypothyroidism 2 (8.5%) were most common medical co-morbidities seen.

The majority of the cases were delivered through caesarean section(40%) due to obstetric causes.

Among the 21(60%) vaginally delivered cases, eight were spontaneous, remaining were operative vaginal deliveries.

Depicting the mode of delivery 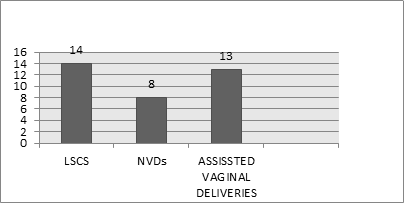 Depicting the indications of LSCS

Showing the type of anaesthesia 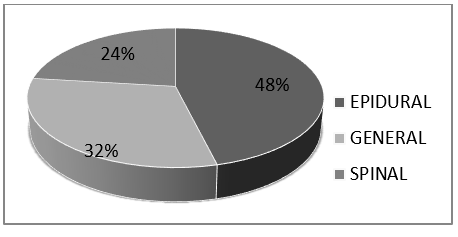 Cardiac failure is a major complication during pregnancy and is often associated with maternal death.

There were three maternal deaths that occurrd during the study period.

Perinatal outcome: Most of the babies, 27(77%) were delivered as term and healthy. Only 8 babies(23%) were preterm. 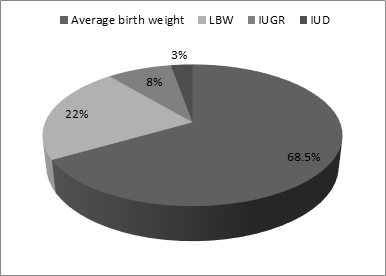 In the present study prevalence of heart disease is 0.7%. Cardiac disease continues to be a risk factor for maternal morbidity and mortality.

The incidence of cardiac abnormalities in pregnancy has remained more or less unchanged, but the relative contribution of type of heart disease varies with study population and study period.

Our study shows that RHD is still a major group of heart disease in pregnancy among which mitral valve disease is the commonest. RHD constituted 51.4% of cases of all cardiac diseases during the present study. These observations are in agreement with other Indian studies. Various authors have reported proportion of RHD from 54% by Chaudhari P et al14 to 73% by Sengodan SS et al.15

MODE OF DELIVERY: The type of delivery mainly depends on the hemodynamic status of the patient as well as obstetric indications.17 Deliveries in women with cardiac disease are best accomplished in a tertiary care hospital.

Vaginal delivery is the preferred mode of delivery in most women, even in those with established cardiovascular disease. Ideally all pregnant women with cardiac disease should expect an attempt at vaginal delivery unless obstetric contraindications exist.

In the present study, 22.8% of patients had normal vaginal deliveries and 40% had LSCS for obstetric and cardiac indications while 37.14% underwent instrumental (ventouse/forceps) vaginal deliveries. There is an increased incidence of LSCS in our study which is in disagreement with other recent studies as we had more women with prior cesarean section.

Fetal outcome in cardiac patients is usually good and only a little different from those patients who do not suffer from heart disease. 31.4% of the babies were of low birth weight and most of the babies weighed between 2.0-2.5 kg and there were 3 IUGR (8.5%) babies. 1 baby died in utero.

Throughout the study 3 maternal mortalities occurred. Thus, making a case fatality ratio of 8.5%. This is slightly more than that in studies done by Nagamani G et al18 and Devabhaktuni P et al.19

Contraceptive Choices: There is no single best method for contraception and it should be individualized in each case after extensive counselling of the couple. Combined oral contraceptives are not preferred in women with cardiac disease due to the increased risk of thrombotic complications.

The conventional barrier form of contraception like condoms, diaphragms and foam is safe in all patients however their low efficiency must be considered while recommending them. Barrier contraception with levonorgestrel containing intrauterine device or a dermal implant seems to be the best available option for long term reversible contraception.20

In our study, concurrent bilateral tubal ligation was done for consenting patients, others were advised barrier contraceptives and hormonal IUCD. Vasectomy was also offered to male partners.

The management of a pregnant woman with heart disease requires a multidisciplinary team for optimal maternal and fetal outcomes. But the majority of pregnancies complicated by heart disease are uneventful with a favourably good outcome for both the mother and the fetus.

Rheumatic valvular heart disease is still the most commonly encountered pathology and imposes a huge burden on limited healthcare resources.

The management includes intensive care throughout pregnancy and also during labor and postpartum. Counselling and management of women of childbearing age with suspected cardiac disease should start before pregnancy occurs.

Counselling for contraception and family planning and follow up during subsequent pregnancies is mandatory.

The Criteria Committee of the New York Heart AssociationNomenclature and Criteria for Diagnosis of Diseases of the Heart and Great Vessels9th editionLittle, Brown & CoBoston, Mass19942536

ACOG Practice Bulletin No. 199: Use of Prophylactic Antibiotics in Labor and DeliveryObstet Gynecol20181323e10319