Valvi and Airao: A comparative study of induction of labour with intravaginal misoprostol and intracervical dinoprostone gel and its fetomaternal outcome in a tertiary care hospital

Introduction: The objective of the present study was to compare the two most commonly used agents for induction of labor-vaginal misoprostol and intracervical dinoprostone gel in terms of the incidence of cardiotocography (CTG) abnormalities and its correlation with fetal distress and fetomaternal outcome.

Conclusions: While misoprostol is a better agent for induction when compared with dinoprostone E2 gel in terms of induction-delivery time, higher vaginal delivery rates, less dose requirement, it is associated with greater incidence of non-reassuring/pathological CTG. There was justified improvement in perinatal outcome due to preparedness beforehand with use of CTG.

The goal of induction of labour is to achieve vaginal delivery by stimulating uterine contractions before the spontaneous onset of labour. Generally, induction of labour is a therapeutic option when the benefits of expeditious delivery outweigh the risks of continuing the pregnancy.1 The common indications include membrane rupture without labor, hypertensive disorders of pregnancy, oligohydramnios, post term pregnancy, and various maternal medical conditions such as chronic hypertension and diabetes. Oxytocin has been used for decades to induce or augment labour. Other effective methods include prostaglandins, such as misoprostol and dinoprostone, and mechanical methods that encompass stripping of membranes, artificial rupture of membranes, transcervical balloons, and hygroscopic cervical dilators.2 Labour itself is a stress factor for the fetus within the uterus. During active labour the integrity of the uteroplacental circulation and the frequency and intensity of uterine activity influence the acid-base status of the fetus. Electronic fetal heart rate monitoring (EFM) with CTG is commonly used means of fetal wellbeing assessment in labour and to identify hypoxia indirectly before brain damage has been incurred. The efficacy of EFM during labour is judged by its ability to decrease complications, such as neonatal seizures, cerebral palsy, or intrapartum fetal death, while minimizing the need for unnecessary obstetric interventions, such as operative vaginal or caesarean delivery.3, 4, 5

As induction of labour is on the rising trend, it is important to understand and devise method to assess the fetal wellbeing, diagnose fetal distress at earlier stage and corelate with feto-maternal outcome in cases undergoing induction of labour. At present, non- invasive CTG monitoring of FHR seems to be desirable and better than intermittent auscultation in this regard. With this background, the present study was conducted with the primary objective of comparing two most commonly used agents for induction of labor-vaginal misoprostol and intracervical dinoprostone gel in terms of the incidence of CTG abnormalities (suspicious or pathological CTG tracings) and its correlation with fetal distress. Secondary outcomes like time interval from induction to vaginal delivery, vaginal delivery rates within 12 and 24 hours, dose requirements, incidence of tachysystole (>5 contractions in 10 minutes), rate of emergency caesarean section due to fetal distress or nonprogress were also compared in the two groups.

This was a hospital based prospective case-control study conducted in department of obstetrics and gynecology, RIMS, Ranchi from 1st August 2017 to 31st October 2018 over a period of 15 months. Approval for the study was obtained from Institutional Ethics Committee, CUSMC, Surendranagar. 112 pregnant women requiring induction of labour and fulfilling the inclusion criteria were included in study.

Study group were randomly assigned into 2 groups of 56 women each. Group D received 0.5 mg of prostaglandin E2 gel given intra-cervically every 6 hours to maximum 3 doses. Group M received 25 microgram of vaginal misoprostol 4 hourly to maximum of 4 doses. Fifty-six women who underwent spontaneous labour served as control (Group C.) All three groups were similar with respect to age, parity and gestational age. Informed consent was taken from all women. Pre-induction cardiotocography was performed and Bishop score was assigned on admission for all women enrolled in the study before randomization. Women with an established uterine contraction pattern of greater than 3 contractions in 10 minutes were not redosed with study agent. CTG monitoring was done 1 hour after induction, four hourly and intrapartum continuous monitoring once the patient was in active phase of labour. Vaginal examinations were performed 4 hourly. Uterine hyperstimulation were managed with a single dose of subcutaneous terbutaline (0.25) along with position change and oxygen administration. Cardiotocographic tracings were independently reviewed and graded into Normal, Suspicious or Pathological according to NICE guideline. 6

Redosing was not done in case of suspicious or pathological CTGs. The decision to discontinue labour and deliver by LSCS was made if fetal distress supervened or delayed progress of labor occurred. At delivery, condition of the babies was assessed in terms of Apgar score at 1 and 5 minutes, birth weight and immediate neonatal nursing care provided. Perinatal morbidity and NICU stay and its outcome were monitored for fetal outcome. Maternal morbidity and hospital stay were recorded to identify the effect of induction on mother.

Descriptive statistical analysis has been carried out in this study. Results on continuous measurements are presented on Mean±SD and results on categorical measurements in number (%). A p-value of less than 0.05 was considered significant for the purpose of result analysis. Student T- test, chi-square test and fisher exact test have been used to calculate the p-value and data was analysed using SPSS.

Shows that most common indication for induction of labour in two study Groups M and D was prelabour rupture of membranes followed by post-dated pregnancy and HDP and were statistically similar. Out of 56 women, 51 women in Group M and 34 women in Group D went into early labour. 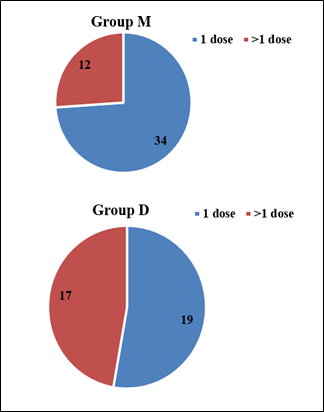 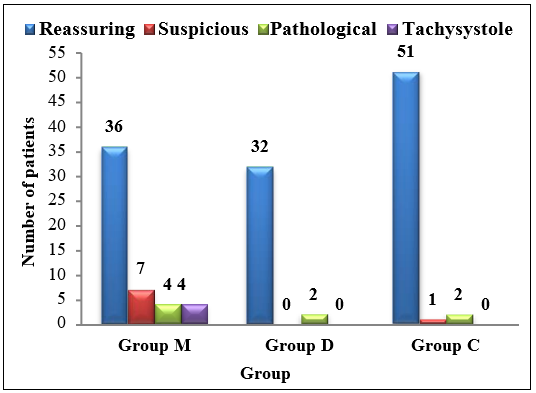 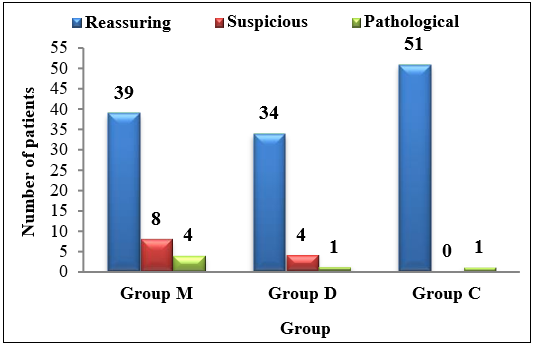 Table 2 shows that favourable mean bishop scores were achieved faster in Group M as compared with Group D with each dose.

Table 3 shows mode of delivery in different groups. In Group M, 80.35% of cases delivered vaginally unlike Group D where only 62.5% cases had a vaginal delivery. In Group C, 83.9% of the women delivered vaginally. Table 4 depicts that in cases of successful vaginal deliveries in Group M (46) and Group D (35), mean induction to delivery interval was found to be shorter in Group M (9.54 hours) than Group D (13.45 hours), which was statistically significant (p-value 0.003). Table 5 shows that in Group M, most common indication for LSCS was pathological CTG (70%) followed by arrest in 2nd stage of labour (20%) and failed induction (10%), unlike in Group D, where the most common indication was failed induction (65%) followed by pathological CTG (20%) and suspicious CTG (15%).

Apgar Scores at 1 minute in the three groups 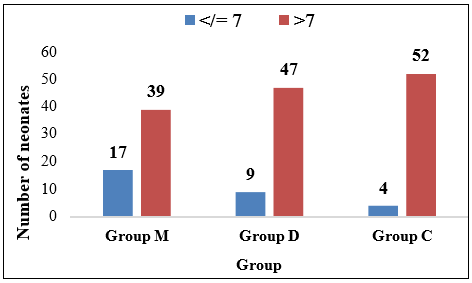 Apgar Scores at 5 minutes in the three groups 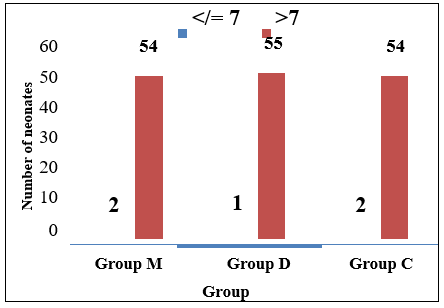 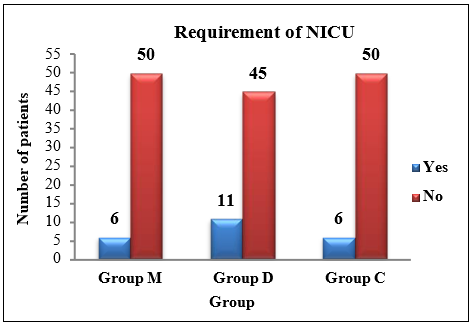 Induction of labour remains a challenge when it comes to unfavorable cervix. Prostaglandins are highly efficacious agents for this purpose, resulting in effective cervical ripening. Use of prostaglandins shortens induction- delivery time and improves the probability of a successful vaginal delivery. In this study, authors compared the effect of vaginal misoprostol and intracervical prostaglandin E2 gel for induction of labour on CTG tracings. This study also compared these findings with incidence of non-reassuring CTG in women with spontaneous onset of labour. Use of these agents is associated with a higher incidence of abnormal uterine contractions and non-reassuring fetal heart rate patterns.7, 8

In this study, it was observed that cardiotocographic abnormalities were more frequent when misoprostol was used as induction agent instead of prostaglandin E2 gel. Incidence of non-reassuring CTGs was higher in women undergoing induction of labour as compared to women in spontaneous labour. Higher incidence of Tachysytole was also seen in Group M.

Though frequent cardiotocographic abnormalities were seen in Group M, the cesarean rate was higher in Group D. This could be because though cardiotocographic abnormalities were seen with the misoprostol group, they had a very favorable Bishop score with rapid progression of labour unlike Group D where incidence of failed induction was very high. Thirteen (23.21%) women being induced with prostaglandin E2 gel underwent caesarean section for failed induction which was much higher as compared to Group M where only one (1.7%) case of failed induction was observed. Rate of cesarean section was found to be highest in group D (35.71%) followed by Group M (17.85) and Group S (12.5%).

The study shows vaginal misoprostol was associated with higher incidence of NICU admission (7.14%) compared to dinoprostone gel (5.35%) and those with spontaneous onset of labor (3.57%). However, these observations were not found to be statistically significant. Similar findings were observed in other studies as well where Group M and Group D were found to be similar with respect to neonatal outcomes. Meyer et al observed that there was no statistically significant difference in neonatal outcome.19

With this study, it can be concluded that while vaginal misoprostol is a very good agent for induction of labor as it is associated with shorter induction-delivery time, higher vaginal delivery rates and successful vaginal deliveries with single dose and shorter hospital stay. Prostaglandin E2 gel was associated with a significantly higher rate of cesarean sections mainly due to failed induction which also leads to prolonged hospital stay and higher maternal morbidity. In a developing country like India, vaginal misoprostol offers an advantage in terms of being cheaper than prostaglandin E2 gel. Cold chain is not required for storage of misoprostol, can be kept at room temperature unlike prostaglandin E2 gel which is again advantageous in poor resource setting.

However, unlike prostaglandin E2 gel, misoprostol is associated with greater incidence of suspicious and pathological CTG tracing and tachysystole. These non- reassuring CTG findings were found to be associated with meconium stained liquor, Apgar scores <7 at 1 minute, requirement of resuscitation and NICU admission which are all parameters that indicate intrauterine hypoxia of the fetus and fetal distress. However, with timely resuscitative measures, Apgar scores at 5 minutes returns to normal. Thus, this study also indicated that CTG abnormalities have an association with the outcome of the fetus in women undergoing induction of labor. Continuous electronic fetal monitoring during induction of labor helps to understand fetal status better and predict fetal distress and fetal outcome more accurately as compared with auscultation alone. Preparedness beforehand for proper and timely resuscitation can help the neonate recover from transient effect of inducing agents and labor itself.

American College of Obstetricians and Gynecologists: Induction of labor. Practice Bulletin No. 107, 2009, Reaffied; 2013