In modern obstetrics, one of the common challenges is induction of labour (IOL). WHO Global Survey reported that IOL accounted for 9.6% of all deliveries.

Prostaglandins have evolved and frequently used pharmacologic agents for IOL, owing to their dual action of cervical ripening and uterine contraction inducing effect.

Aim: 1. To compare the efficacy and induction to delivery interval (IDI) of PGE2 vaginal insert and Sublingual PGE1 in induction of labor in term pregnant women; 2. To study the maternal and fetal outcome in both groups.

Conclusion: Our study concluded that Dinoprostone 10mg vaginal insert was more efficacious than sublingual Misoprostol in reducing induction to delivery interval without maternal and fetal complications.

Induction of labour (IOL) defined as the initiation of labour by artificial means prior to its spontaneous onset at a viable gestational age, with the aim of achieving vaginal delivery in a pregnant woman with intact membranes (WHO 1). A study by the WHO Global Survey reported that IOL accounted for 9.6% of all deliveries.1

An ideal inducing agent is one which achieves labour in the shortest possible time, with a low incidence of operative delivery, cost effective, good shelf life, easily stored, does not affect the feto-placental unit, with no increase in maternal or perinatal morbidity.2, 3, 4

Dinoprostone- PGE2 is currently available as a 10-mg sustained-release vaginal insert that releases dinoprostone at a rate of 0.3 mg/hour for 24 hours. The advantages of dinoprostone insert is that it is easy vaginal application and removed in the event of uterine hyperstimulation. But, PGE2 insert is more expensive and needs cold storage. Dinoprostone is administered intravaginally and its half-life is approximately 2.5-5 minutes.5, 6

Misoprostol is a synthetic prostaglandins (PGE1) analogue; it is rapidly absorbed by gastrointestinal tract. Misoprostol is extensively used because it is effective, inexpensive, available in tablet form, and no need cold storage. It has minimal effect on cardiovascular system and bronchial smooth muscles and so can be safely used in hypertensive and asthmatic patient.

Misoprostol can be administered intravaginally, orally, or sublingually and is used for both cervical ripening and induction of labor. Total systemic bioactivity of vaginal misoprostol is three times greater than that of orally administered misoprostol. The use of sublingual misoprostol also offers high efficacy as it bypasses gastrointestinal and hepatic metabolism and also lowers hyperstimulation of uterus. The peak concentration is achieved about 30 minutes after sublingual and oral administration, whereas following vaginal administration, it takes 75 minutes.3 It is available as 25mcg, 200mcg and 600 mcg tablet. Although misoprostol currently is approved by the U.S. FDA for the prevention of peptic ulcers, in 2002, they approved a new label on the use of misoprostol during pregnancy for cervical ripening and induction of labor.4, 7

S.Campbell Austin, et al8 2010; Labour induction with intravaginal Misoprostol compared with the Dinoprostone vaginal insert: meta analysis. Total 11studies and 1572 women were enrolled in those trials. In this study, women who received Misoprostol had a higher incidence of vaginal delivery within 12 and 24 hours of prostaglandin application, compared with Dinoprostone. No significant difference in neonatal outcomes was noted between 2 groups. The study concluded that vaginally administered misoprostol was more effective than Dinoprostone vaginal insert for cervical ripening and labour induction and the safety profiles of both drugs were similar.

Rouzi AA, et al.10 2014 compared the efficacy and safety of oral misoprostol- 20mcg /hour for 2 doses with vaginal dinoprostone insert in 160 women with dinoprostone 10 mg vaginal insert. The proportion of women who achieved vaginal delivery within 24 hours was significantly greater for women in the misoprostol group compared with the dinoprostone group.

Wang L, et al11 2016, studied efficacy of intravaginal misoprostol compared with the dinoprostone insert for labor induction at term: a meta-analysis. Eight of 436 studies (1669 women) identified met the criteria for meta-analysis There was no difference in the risk of tachysystole, uterine hyperstimulation, vaginal delivery within 24 h, caesarean delivery, NICU admission, between misoprostol and dinoprostone.

100 women were randomly selected with the help of computer generated system and divided into two groups of 50 each.

Group 1: Dinoprostone (PGE2) insert (10mg) was administered intravaginally. The insert was held between the index and middle fingers and is positioned transversely, high in the posterior fornix, using only small amounts of water soluble lubricants to aid insertion. Once correctly inserted, the end of the tape kept extended 2-3 cm from the vagina to facilitate removal by gentle traction on the retrieval cord. Patients were asked to remain recumbent for 20-30minutes to allow the insert to hydrate and swell, but after this period they may be ambulatory.

Technique of insertion of PGE 2 insert

a: Holding dinoprostone vaginal insert firmly between the index and middle fingers, the vaginal insert is introduced into the vagina and positioned behind the posterior vaginal fornix;b: Insert is positioned transversely to ensure it remains in situ;c: The retrieval cord should remain visible outside the vagina to permit removal

Group 2: Sublingual tablet Misoprostol(PGE1): Loading dose of 50 mcg PGE2 was given followed by 25mcg every 4hrly till patient goes into active phase of labor. Maximum 200mcg of PGE2 was given.

After admission, detailed physical examination was done for all women and a 20 minutes fetal heart cardiotocography was performed. The vital signs of the patient were monitored at hourly intervals for two hours and then at four hourly intervals thereafter. Uterine contractions and foetal heart rate were recorded every 15 minutes. If there was spontaneous rupture of membranes, the PGE2 insert was removed from the vagina. Patients who had non-progress of labor received intravenous oxytocin augmentation.

Statistical analysis of the study

Data were statistically described in terms of mean (±SD), frequencies (number of cases) and percentages when appropriate. Comparison of quantitative variables between the study groups was done using unpaired t-test and Chi square test. Exact test was used instead when the expected frequency is less than 5. A probability value (p value) less than 0.05 was considered statistically significant. All statistical calculations were done using computer programs Microsoft Excel 2013 and Statistical Package for the Social Science; SPSS Inc., Chicago, IL, USA version 21. 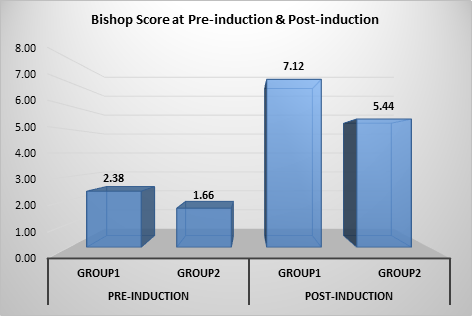 Comparison of latent and active phase of labour 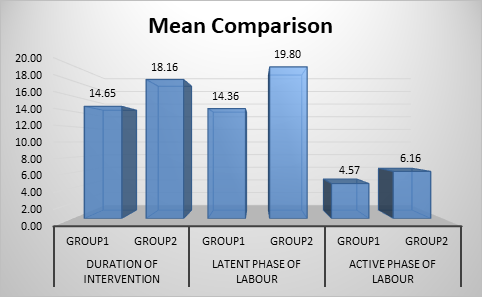 There was significant difference in mean duration of latent phase in both the groups. With the value of <0.01.

There was significant difference in mean duration of active phase in both the groups. With the value of <0.01.

Comparison of induction to delivery interval 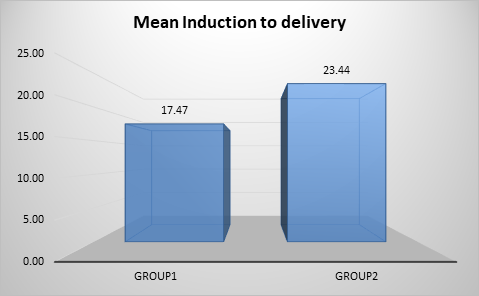 There was significant difference in mean induction to delivery interval in both groups. With P value of <0.01.

There was no significant difference in APGAR score at 5 minutes in both groups.

The 5 minute APGAR score was >7 in all the babies.

There was no significant difference in need for NICU admission across both groups. (P value 0.199).

In my study, the Bishop’s score improved better in Dinoprostone group 1 than in Misoprostol group 2.

Braganza Veena et al.,13 where they found there was statistically significant change in mean Bishop’s score in pre-induction (3.32 vs 3.34) and post induction (8.59 vs 6.77) in both groups. So they concluded that the Bishop’s score improved better in Misoprostol group than in Dinoprostone group.

Mayer et al,12 found that requirement of oxytocin was almost similar in both PGE1 and PGE2 groups.

In Wing et al. 200811 study, active phase of labour was longer in Dinoprostone group than the Misoprostol group.

Braganza et al,13 reported no statistical significant difference in the mean induction to delivery interval in both groups. The mean IDI was 35.8 hours in misoprostol group and 32.4 hours in Dinoprostone group (P=0.106).

Study done by Mayer et al, 12 showed that the mean induction to delivery interval in Misoprostol group was761 minutes and in Dinoprostone group, it was 805.17 minutes, which was not statistical significant. In our study 44%(22 women out of 50) from Misoprostol group whereas 32% (16 women out of 50) from Dinoprostone group underwent caesarean section.

Though use of the Misoprostol was associated with an increased likelihood of caesarean delivery (RR.1.01), this difference did not achieve statistical significance.

Similar observations were noted in the study done by Mayer et al.12 There was no significant difference in mode of delivery across two groups (Misoprostol vaginal insert 200mcg versus Dinoprostone vaginal insert 10mg).

There was no statistical significant difference in the Mean Birth weight of the babies, Apgar score and NICU across the two groups

There was no significant difference noted in terms of overall incidence of caesarean deliveries among the groups.

The incidence of meconium stained amniotic fluid was less in Dinoprostone group thus reducing the maternal and fetal morbidity.

Dinoprostone is comparatively expensive, requires refrigeration (-10 to -25C), and is not stable at room temperature.

Thus we came to a conclusion that Dinoprostone vaginal insert was more efficient than sublingual Misoprostol in terms of short induction to delivery interval without maternal and fetal complications.

Our study concluded that Dinoprostone 10mg vaginal insert was more efficacious than sublingual Misoprostol in reducing latent and active phases of labour and induction to delivery interval without maternal and fetal complications.

We would suggest, need of more multicentric, randomized trials with large sample size comparing Dinoprostone vaginal insert with sublingual Misoprostol tablet to evaluate its efficacy and safety in induction of labour.