Syphilis in pregnancy: The menace continues to haunt

Key Messages:  Universal screening of all pregnant women at first antenatal visit with a non-treponemal test should be used for screening for syphilis in pregnancy.

Syphilis is a sexually transmitted infection (STI) caused by the spirochete Treponeme pallidum which is of particular concern during pregnancy because of the risk of transplacental infection to the fetus.1 Stillbirths and childhood mortality due to syphilis are continuously being reported each year.

The national HIV program data reveals that the prevalence of syphilis among pregnant women attending antenatal care was 0.23% in 2014–2015 which was increased slightly to 0.16% in 2016–2017.2 However, In India there is lack of reporting and stigma attached to sexually transmitted diseases.

Globally the estimated total number of congenital syphilis (CS) cases per 100,000 live births fell from 539 in 2012 to 473 in 2016.3 Fetus can be affected from as early as 8–10 weeks of gestation and affection increases with gestation.4 Once the fetus is infected wide spread dissemination occurs and any organ system can be infected. Presentation is varied from abortion to still birth to low birth weight baby and depends upon the stage of syphilis, gestational age, maternal treatment and immunological response of fetus. Rate of transmission is higher for primary, secondary and early latent syphilis with transmission rate as high as 80–100%.5 Routine antenatal screening, timely diagnosis and proper management of the infection in the pregnant women are important in order to prevent adverse outcome. The Menace of syphilis continues to haunt! Here we are presenting a case of secondary syphilis in pregnancy.

A 34-year-old pregnant female, G2P1001, reported at 24 weeks gestation. During her workup, the venereal disease research laboratory test (VDRL) was found to be reactive, rapid plasma regain (RPR) titre was 1:32 and Treponema pallidum haemagglutination (TPHA) titre was 1:2500. She had history of rashes around her mouth and all over the body one year back and ulcers in the mouth three months before conception but she did not take any treatment.

a: Multiple well defined round skin colored to hypopigmented plaques distributed over neck; b: Lesions over upper chest 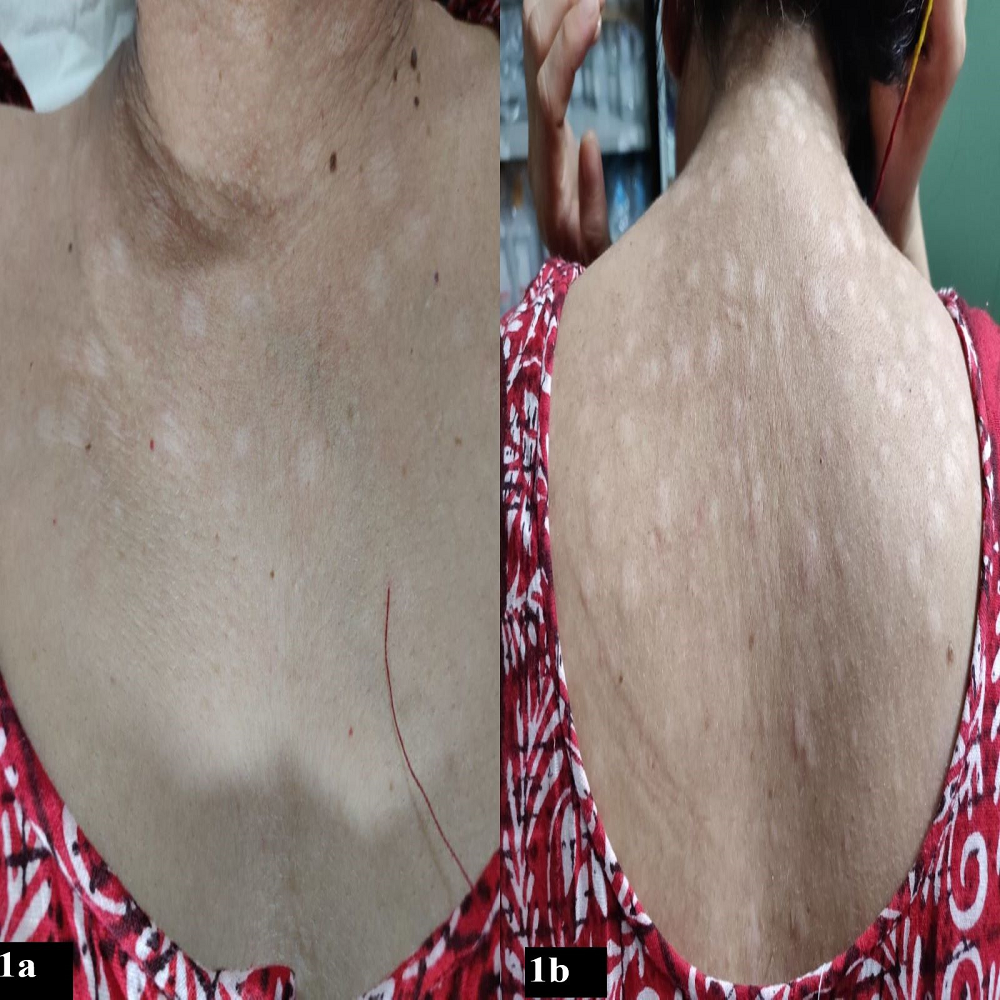 She delivered a baby boy of 1.4 kg by emergency preterm caesarean section (CS) at 32 weeks due to preterm premature rupture of membrane. Second dose of Injection benzathine penicillin was given as her RPR titres were high (1:32) even after first dose of benzathine penicillin. Neurosyphilis was ruled out.

There were no obvious congenital anomalies in the baby and no features suggestive of congenital syphilis. Baby received prophylactic single dose of Inj benzathine penicillin (50,000IU/kg) for prevention of congenital syphilis. Placental tissue histopathology report was positive for syphilis and included the triad of enlarged hyper cellular villi, proliferative fetal vascular changes and villitis (Figure 2 a,b,c). 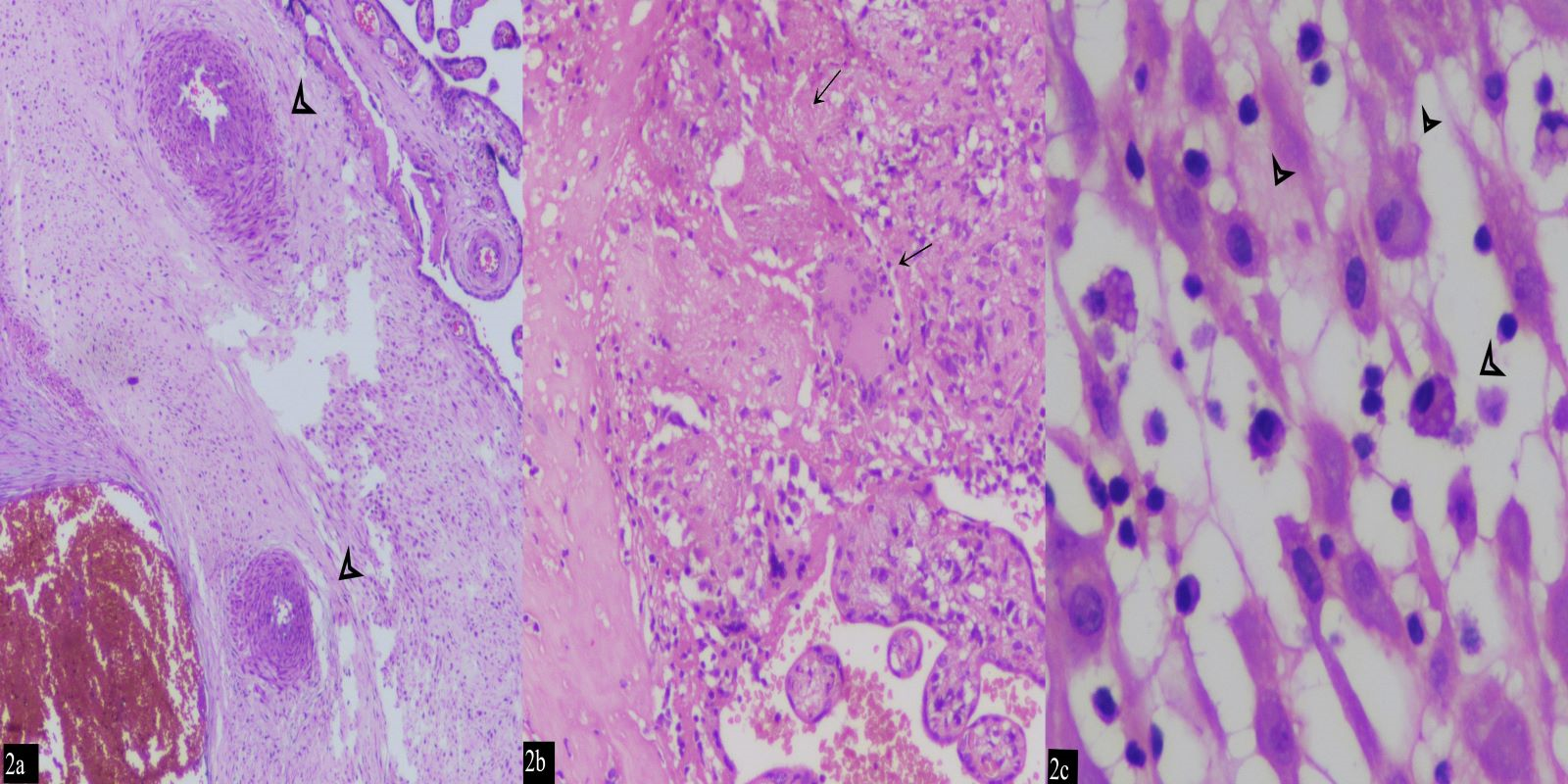 The newborn was tested negative for nontreponemal serologic test with no physical evidence of syphilis. The mother and baby was discharged on day 14 post-delivery in satisfactory condition. In follow up period of one-year baby was asymptomatic.

Syphilis in pregnancy remains an important cause of perinatal morbidity and mortality. It can lead to congenital syphilis due to transplacental transmission, especially in the third trimester leading to high rates of adverse fetal outcomes. It is important to evaluate the pregnant women in early pregnancy so that adequate treatment can be given to improve the fetal and neonatal outcome.6 There are four stages of syphilis. Primary syphilis presents with painless ulcer called chancre in mouth or genitals; secondary syphilis presents 4-8 weeks after primary ulcer with rashes over the body and fever, fatigue and malaise; tertiary syphilis presents 1-10 years after initial infection with aortic insufficiency, aortic aneurysm, tabes dorsalis etc.7

Latent syphilis develops when primary or secondary syphilis is not treated but clinical manifestations resolve.

Our patient presented in the second trimester with rashes over the body. She had a prior history of ulcers in the mouth and her laboratory tests were also positive for syphilis. Hence a diagnosis of secondary syphilis was made. In a recent study done by Kulkarni et al, 33 new cases of syphilis were reported in the general population in 16 months duration with the majority of cases being secondary syphilis but the data about pregnancy was not clear in their study.8

According to the Centers for Disease Control and Prevention (CDC), an adequate response is defined as at least a fourfold decrease in non-treponemal antibody titre. CSF examination and retreatment should be considered if there is no four-fold decrease in non-treponemal test titre within 3 months after treatment for primary or secondary syphilis or latent syphilis regardless of apparent duration.9 In the present case, the titres were the same even after seven weeks of the first dose of benzathine penicillin, hence repeated the dose of Benzathine Penicillin G in mother and also given prophylactic treatment to the baby. Despite Injection Benzathine Penicillin G maternal treatment is said to be inadequate if mother delivers in 30 days of treatment, if there are clinical signs of infection at the time of delivery or there is fourfold rise in maternal antibody titre from pre-treatment titre.7

In case of syphilis, sonographic evaluation of fetus is important to look for signs of congenital syphilis like ascites, hydrops, hepatomegaly, fetal anemia or a thickened placenta. No such features were present in the antenatal scans of our patient which suggests that we started the treatment timely, however, post-delivery the histopathological examination of placenta showed the syphilitic triad. Women treated for syphilis during the second half of pregnancy are at risk for premature labor, fetal growth restriction, fetal infection, fetal distress leading to fetal death.7 If mother is not treated for syphilis, babies presents with problems like blindness, deafness, and seizures in early neonatal period.10 The recommended treatment for primary, secondary and early latent syphilis of less than one-year duration is Benzathine penicillin G 2.4 million units as a single injection some recommend a second dose 1 week later. For latent syphilis of unknown or more than one-year duration and tertiary syphilis weekly 3 doses of Benzathine penicillin G 2.4 million units are recommended.11

Universal screening of all pregnant women at first antenatal visit with a non-treponemal test should be used for screening for syphilis in pregnancy.12 Pregnant women proven to have syphilis by treponemal tests are to be treated adequately according to the stage and duration of syphilis. This can result in better fetal and neonatal outcomes.