Glassy cell carcinoma of the cervix is a rare subtype of adenosquamous carcinoma associated with aggressive course and poor prognosis. It is considered to originate from the subcylindrical reserve cells of the cervix and has been associated with human papillomavirus. Histologically glassy cell carcinoma is composed of nestes of large cells with ground glass cytoplasm and large vesicular nuclei with prominent nucleoli. Nuclear pleomorphism and tumor giant cells are frequently seen. Mitotic activity is brisk. Infiltration by eosinophils and plasma cells with admixture of lymphocytes is a characteristic feature. Focal squamous and glandular differentiation may be seen. The immunohistochemistry markers are positive for squamous cell carcinoma (p63, CK34) and adenocarcinoma(MUC1, MUC2, CEA).

49 year old female presented to gynecological OPD with the complaint of postmenopausal bleeding for one week. She attained menopause 7 years back. Per speculum examination showed broad cervix with mild erosion. Per vaginal examination showed a bulge in the posterior wall of the uterus. Ultrasonography showed hypoechoic mass in the cervix with a likely diagnosis of cervical fibroid. Computed tomographic diagnosis was also cervical fibroid. Total abdominal hysterectomy with bilateral salphingoopherectomy was done. Operative findings showed, bulky cervix with friable mass extending throughout the endocervix.

Histopathological examination was done. Grossly, cervix showed a growth measuring 5x5x3cm. The growth was grayish white in color, soft and fragile and was seen to involve the entire ecto and endocervix. The lower uterine segment was free from tumor grossly. The vaginal flaps showed friable, grayish white areas. Microscopically, cervical tissue showed atypical cells arranged predominantly in solid pattern along with tubular pattern. The cells are highly pleomorphic having moderate amount of eosinophilic cytoplasm and hyperchromatic nuclei with prominent nucleoli in many cells. Nests of cells with clear to pale eosinophilic cytoplasm, notable nuclear atypia and variable sized cytoplasmic vacuoles were noted. It also showed many atypical mitotic figures. Chronic inflammatory cell infiltration were observed in the stroma. Slides stained with Periodic acid schiff’s(PAS) stain was seen positive in cytoplasm focally. Diagnosis of poorly differentiated adenocarcinoma of cervix was made.

Immunohistochemistry was sent and showed strong positivity for Ck, EMA and CEA. Score 1 positivity and block positivity was seen in p63 and p16 respectively. The tumor cells were negative for CK7, ER and viamentin. Based on overall histologic and immunohistochemisty features, diagnosis of glassy cell carcinoma was made.

Specimen of uterus with attached adenexae. Fragile mass involving both ecto and endocervix. Leiomyoma in the myometrium 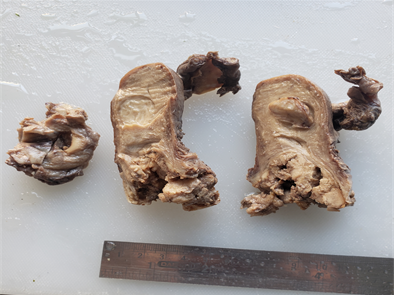 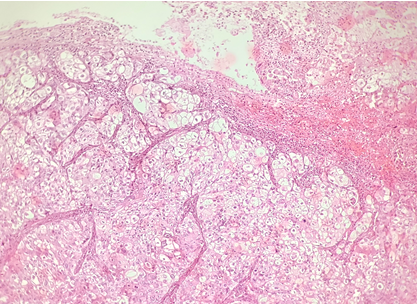 Nests of tumor cells with nuclear atypia (Hematoxylene and Eosin-400X) 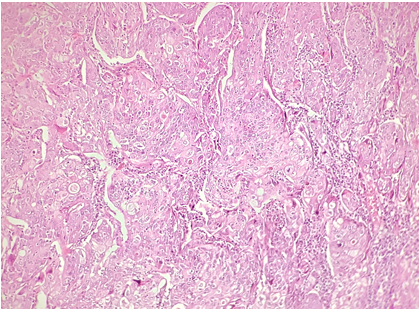 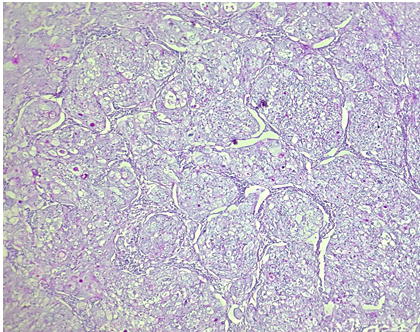 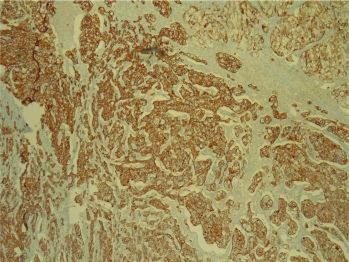 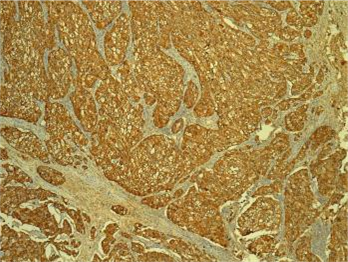 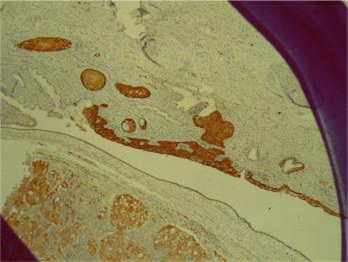 GCC is an aggressive histologic sub-type with poor prognosis.5 The characteristic features of GCC are cells in large nests having sharp margin that is well stained by PAS stain, with ground glass or finely granular cytoplasm and large to ovoid nuclei with prominent nucleoli.2 Our case also showed positivity for PAS stain.

The age of our patient is 49 years, similar to the median age of diagnosis, which is 46 years which is 10 years younger than in other histologic subtypes. An association with Human Papilloma virus and recurrent pregnancy is seen.6

It is important to differentiate it from squamous cell carcinoma and adenocarcinoma as the GCC carries much poorer prognosis and high rate of metastasis outside pelvis.7

The limitation of our study was as the diagnosis was made histolologically, proper clinical staging couldn’t be done and surgery was incomplete without lymph node dissection. Further follow up was done outside our institution and follow up of the patient was not possible.

A Glücksmann CP Cherry Incidence, histology, and response to radiation of mixed carcinomas (adenoacanthomas) of the uterine cervixCancer195699719