Benign mature cystic teratoma has been seen through all ages of a woman’s age. It has varied presentations. Malignant transformation in teratoma though rare is usually seen in postmenopausal women. Malignant transformation is usually detected postoperatively on histopathology. We are reporting a case in which a postmenopausal lady was operated and squamous cell carcinoma in a dermoid cyst was detected postoperatively. Certain signs on the imaging can help to diagnose this in the preoperative period so that proper counselling and treatment can be given to the patient.

The case is being reported for some retrospective insight of features that could help suspect malignant transformation.

A 57years old unmarried postmenopausal woman reported with vague lower abdominal pain. She carried with herself an ultrasound showing a left adnexal complex cyst (10 cm X 6cm with a 2.8cm solid nodule) with no free fluid, suggestive of dermoid cyst. CA125 was 32 IU units and CEA was 2.3 units. There was no history of loss of weight, appetite, or abdominal distension. There was no family history of ovarian or breast carcinoma.

Clinically vitals were normal with no supraclavicular or inguinal lymphadenopathy. On abdominal examination no ascites or mass was detected. Being unmarried, patient refused per speculum and bimanual examinations.

Intra-operatively, left ovary was replaced by a cyst measuring 8cmX6.5cm in diameter. The cyst had smooth surface, no papillary excrescences, had undergone torsion by one and a half turns and was adherent to the sigmoid colon. Peritoneal fluid for cytology was taken. There were no other deposits in the abdominal and pelvic cavity. While separating the cyst, it got accidentally ruptured making the stage to be IC1 (surgical spill). The cyst was filled with hair and pultaceous material and a focal solid area measuring 3cm in maximum diameter was identified, but frozen section could not be arranged due to technical reasons. Total abdominal hysterectomy with bilateral salpingo oophorectomy was done and multiple omental biopsies were taken. 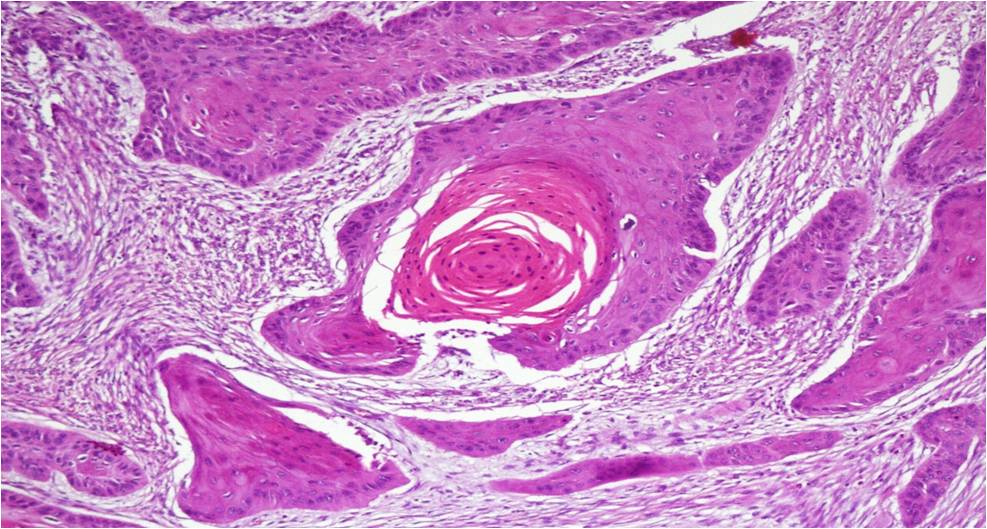 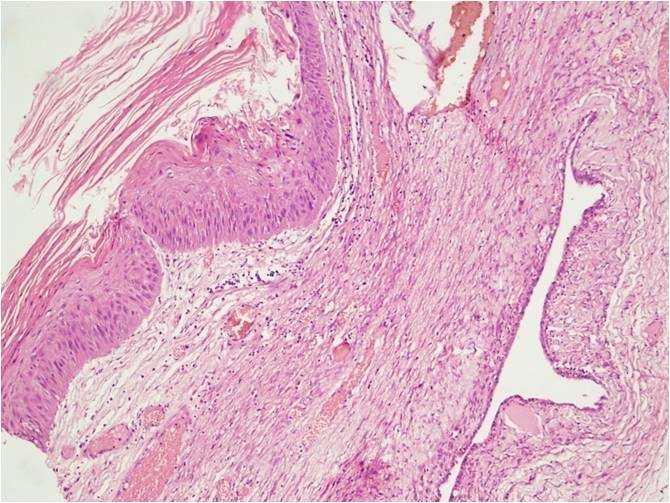 MCT is the commonest ovarian tumour in females of reproductive age and accounts for 10-25% of all ovarian neoplasms.1 Malignancy has been found in association with MCT in 0.5- 2% of cases.2 However, in a retrospective study conducted by Bal A et al. the incidence of MT in MCT was much higher, being 6.67%.6

Squamous cell carcinoma (SCC) of the ovary is usually found in postmenopausal women with a mean age of 55.2 years as compared to 37.5 years in benign dermoid tumour.7 Our patient was a 57 years old post-menopausal woman. Mostly patients present with lower abdominal pain as in our patient, abdominal mass, or abdominal distension7 but can also present with features suggestive of torsion as occurred later in our patient.8

Mean tumour size of MCT is 64mm and of MT is 92-152mm7 being like our ultrasound and histopathology report which may have macroscopically been undersized because of rupture and extrusion of material.

Due to the rarity of malignant transformation, pre-operative diagnosis of SCC in MCT is difficult to make.9 The RMI (risk of malignancy index) based on CA125 value, menopausal status and ultrasound parameters helps categorize patients with ovarian mass into low, intermediate and high risk groups for malignancy with a sensitivity of 85.4% and specificity of 96.9%.10

In a typically suspected case of dermoid cyst on USG without any suspicion of malignancy, CA-125 may not be ordered routinely and hence RMI index is not always calculated. Our patient was also a clinically suspected case of dermoid cyst preoperatively and intraoperatively with no suspicion of malignancy but if RMI score would have been calculated which came out to be 96 (CA125×U×M, that is, 32×1×3), she would lie in the intermediate risk group and need to be investigated further for malignancy.

Fat-suppression techniques in magnetic resonance imaging arising from fat present in the dermoid cyst have also been suggested to help in preoperatively suspecting MT. 16

Suspecting malignancy preoperatively helps in deciding the mode of surgery between laparotomy vs laparoscopic removal. Open surgery is believed to decrease the chances of spillage and peritoneal dissemination and hence prevent subsequent up staging of tumour. Laparoscopic removal of adherent MCTs frequently causes spillage. Intraoperative spillage of the tumour contents is also significant as it leads to expeditious postoperative progression.17

Another study attempted to co-relate HPV(human papilloma virus) infection with malignant transformation in MCT of the ovary as HPV is implicated as a causative factor in squamous cell carcinoma of the cervix. By demonstrating HPV capsid and HPV16/18 E6 proteins in the SCC-MCT tissue, cervix, and adjacent reproductive organ tissues including pelvic and para-aortic lymph nodes in 95% cases, the possibility of ascending route of infection of viral particles from the cevix, endometrium, fallopian tubes and then to the ovaries has been suggested, thereby establishing a causal factor relationship between HPV and squamous cell carcinoma in ovarian MCT. 19

Treatment is multimodal therapy including surgery followed by chemotherapy or radiotherapy. Chemotherapy is usually cisplatin-based combination (BEP) therapy. The benefits of radiotherapy and chemotherapy remain doubtful. However, it can be considered in women at high risk of relapse postoperatively.3 Compared to primary epithelial ovarian tumours, chemotherapy is less effective in MCT.1 Many studies have advocated simultaneous chemoradiation as is used for cervical squamous cell carcinomas, with varying results.1, 8

A second debulking surgery is suggested where long lasting remissions are followed by recurrence. It is usually performed if there is a single site relapse which is completely resectable.

Malignant transformation in mature cystic teratoma is a rare entity. But it is associated with poor prognosis. In advanced stages or large sized ovarian masses complete preoperative workup with all tumour markers and imaging techniques should be availed to substantiate suspicion. Open surgery should be preferred with prior intimation for frozen section and consent for complete staging laparotomy. Post-operative follow up and treatment depending on stage should be offered as per institute policy. In view of its rarity, consensus on ideal treatment is lacking.

A Bal H Mohan SB Singh A Sehgal Malignant transformation in mature cystic teratoma of the ovary: report of five cases and review of the literatureArch Gynecol Obstet200727517982

Royal College of Obstetricians and Gynaecologists. The Management of Ovarian Cysts in Postmenopausal Women. Green-top Guideline No.34. London: RCOG; 2016