Objectives: Present a case of a successful pregnancy in a patient with Double Outlet Right Ventricle (DORV).

Results: Participant: A pregnant 36-year-old patient with a DORV. This patient does not aware if she has Cardiac Disease but patient often complaining easy fatigability after doing light work and developed cardiac symptoms, such as dyspnea since 28 weeks Age of Gestation. Once the symptoms developed, patient was referred to Secondary hospital in Bojonegoro, echocardiography was done and patient was diagnosed with DORV. Since DORV is rare case and complicated, after that patient referred to Airlangga Hospital for further evaluation and treatment. Patient was admitted for 9 days, corticosteroid for lung maturity was given and underwent elective C-Section under epidural anesthesia on 34/35 age of gestation. Course in the ward was unremarkable and patient was discharged post operative day 3.

Conclusion: This patient was diagnosed with DORV Subaortic Type and underwent cesarean delivery without complication and delivered baby boy without any congenital anomaly from physical examination. The systemic circulation from this patient was balanced until third trimester because the increase of blood volume.

Congenital heart defects (CHDs) occur in about 0.5–1% of all newborns and are the most common birth defects. Double outlet right ventricle (DORV) accounts for approximately 1–3% of all CHDs. Similar to Tetralogy of Fallot (TOF), DORV is a subtype of contruncal heart defects (CTDs) and is anatomically characterized by a malposition of the greatarteries.4

Many authors have suggested that double outlet right ventricle originates by a specific morphologic and haemodynamic pattern of embryonic heart in XIII and XIV Streeter horizons, in which the right ventricle has two outputs.5, 6 Trisomy 13 dan 18 and deletion of chromosome 22 q11.2 are the most common genetic lesion. 7 A recent study also linked gene ZFPM2/FOG2 as the cause of the DORV. 4 The definition of DORV is that the pulmonary artery and aorta arise from the morphologic right ventricle. DORV is almost always associated with a Ventricular Septal Defect (VSD). DORV can be classified into 4 types depend on the location of VSD in relation to the great arteries. First is subaortic VSD, subpulmonic VSD, doubly commited VSD, non committed or remote VSD.8

Echocardiografi is the most common and easiest way to diagnosed DORV. All of the pregnant women with the cardiac disease should undergo ultrasonography on 18-22 weeks Age of Gestation(AOG) to check possibility of cardiac disease on fetus.9

This Case report is the first case of DORV in Unversity Airlangga Hospital Surabaya. Patient is 36 years old pregnant woman who works as farmer and graduated from elementary school. This patient was referral from Dr. Sosodoro Bojonegoro Hospital with GII P0010 34/35 AOG with Congenital Heart Disease. This is her second pregnancy with her first pregnancy ended in abortion on first trimester. There was no symptom noted until the pregnancy reach 28-29 AOG. Patient started complaining of difficulty of breathing in 28-29 weeks AOG when doing light works. Patient had Antenatal Care in midwife, and she was told that she might had Congenital Heart Disease, therefore she was referred to Dr. Sosodoro Bojonegoro Hospital for further evaluation. Patient underwent echocardiography and was diagnosed with DORV. Because patient is pregnant with uncorrected DORV and it is a rare case, patient referred to Unversity Airlangga Hospital Surabaya for further management. 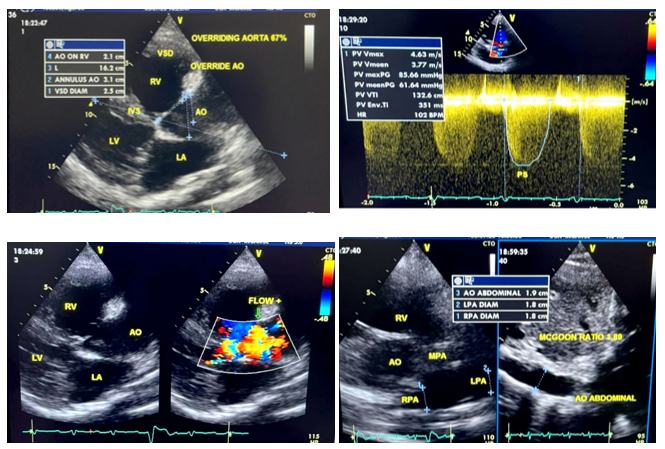 DORV is a rare case, and only a few of pregnant women with uncorrected DORV was reported and ended well. Our patient was diagnosed with DORV on 33-34 weeks AOG. Wang et al. reported Case Series of 21 patients with uncorrected congenital heart disease and underwent delivery with good prognosis but all of this patients in NYHA I atau II.10 Complication for pregnant women with uncorrected DORV include spontaneous abortion, still birth, IUGR and preterm birth.11 We also diagnosed IUGR from ultrasonography and after delivery because of Lubchenco score <10%. Hypoxic condition from this patient will cause polycythemia and increase in blood viscosity in the end it will increase the risk of thromboembolism. The Increased oxygen demand in patients exceeds the body's ability and adaptation during pregnancy, this will increase the risk of abortion.12 Patient had spontaneous abortion in her first pregnancy, However, as occurred in our patient, it is very important to note that pulmonary stenosis has a protective effect because it allows oxygenated blood to pass from the left atrium to the aorta, and it can also improve pulmonary venous return to systemic circulation with greater oxygen saturation, which is related to fewer complications during pregnancy in these patients. 13

Our patient was diagnosed with DORV and underwent cesarean section without any complication and delivered baby boy without any abnormality from physical examination. Pulmonary and systemic circulations had a haemodynamic balance, until volume overload made symptoms of heart failure apparent. Early diagnosis and proper counseling are keystones for a successful pregnancy outcome.