Ovarian teratomas are the most common germ cell tumors and are classified as mature, immature and malignant.

Mature cystic teratomas, also called dermoid cysts, are the most common germ cell tumour, accounting for upto 70% of benign ovarian masses in the reproductive years and 20% in postmenopausal women.

This case report provides a brief summary of the clinicopathological features of the ovarian teratomas such as, the immature teratoma which being a rare tumour was diagnosed in a 15 year old adolescent girl, managed surgically by laparotomy followed by chemotherapy, and the other case of a benign mature cystic teratoma in an elderly 52 year old postmenopausal woman, managed surgically although benign cystic teratomas are rare in the postmenopausal age group.

Adnexal masses are commonly encountered in gynecologic practice and often present both diagnostic and management dilemmas. In pre-menopausal women, most adnexal masses are benign with an overall incidence of malignancy of only 1-3:1000.1 Teratomas have a heterogenous epidemiological, clinical, and pathological pattern in childhood, adolescence, reproductive age group and postmenopausal women.2 Ovarian teratomas include mature cystic teratomas (dermoid cysts), immature teratomas, and monodermal teratomas (eg:struma ovarii, carcinoid tumors, neural tumors).3 Mature cystic teratomas, also called dermoid cysts, are the most common germ cell tumor, accounting for upto 70% of benign ovarian masses in the reproductive years and 20% in postmenopausal women. Immature cystic teratomas are much less common (<1% of ovarian teratomas), and affect the younger age group (usually during the first two decades of life), with peak occurrence between 15 to 19 years of age.1

A 15-year old unmarried girl was admitted in our hospital with history of irregular menstrual cycles with intermittent abdominal pain radiating towards the inguinal region since 3 months. She had attained menarche at 12 years of age and had been having regular cycles with no dysmenorrhea previously. Pregnancy was ruled out by doing UPT which was negative.

On examination, an abdominal mass measuring about 15x10 cm in the hypogastrium, firm in consistency, irregular surface, ill-defined margins, with restricted mobility was found. Tumor markers such as CA 125, LDH and AFP were found raised, while Beta HCG was normal, thus raising the suspicion of malignancy. 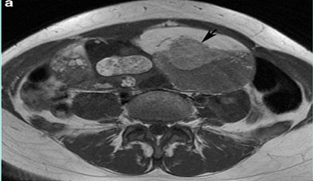 In the lower abdomen containing fat with cystic nodule. 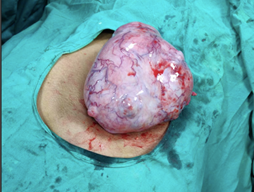 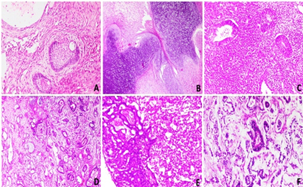 A 52-year old P3L3 postmenopausal lady was admitted at our hospital with complaints of mass per abdomen since 2 months. There was no history of pain abdomen and post menopausal bleeding. She attained menopause 5 years back. On per abdominal examination, amass of around 16x20 cm in the hypogastrium which was cystic in consistency, with smooth surface, well defined borders was noted. On per vaginal examination, uterus was atrophic, amass corresponding to 16-20 weeks, separable from uterus was found, right for niceal fullness was present, however there was no for niceal tenderness or no nodularity in the Pouch of Douglas.

Staging laparotomy comprising of (Total Abdominal Hysterectomy with bilateral salpingoophorectomy and omentectomy) was done. Intraoperatively, a left ovarian mass corresponding to 20x18cm size noted, solid to cystic in consistency. There was no evidence of omental caking or deposits found. Ascitic fluid cytology was negative for malignancy. 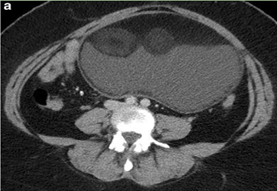 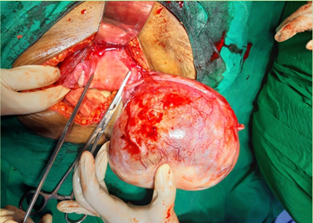 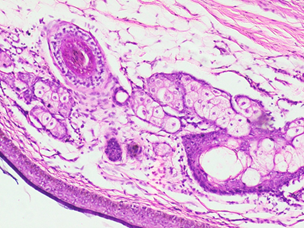 Teratoma is a special type of mixed tumor that contains recognizable mature and immature cells or tissuesnderived from one or more of the three primordial germ cell layers.”Mature cystic teratomas (dermoid cysts)are the most common benign ovarian neoplasms, accounting for 10-20% of all ovarian tumours. May occur at any age, but the peak incidence is reported between 20-40 years of age. Most of them aremasymptomatic, “however, abdominal pain or other non specific symptoms occur in minority of patients. Ovarian cystectomy may be the technique of choice in younger women unless the patient chooses oophorectomy. Oophorectomy should be the standard operation in postmenopausal women and in perimenopausal women with multiple cysts in the same ovary or with large ovarian mature cystic teratoma where there is not much ovarian tissue to conserve.4 The spillage of cyst contents should be avoided where possible as preoperative and intraoperative assessment cannot absolutely preclude malignancy and to avoid the potential risk of chemical peritonitis.

According to a study conducted by Ruchi Rathore et al., it was found that malignant transformationpof these tumors is a rare complication, seen in 1-3% of the” patients, most often in the form of squamous cell carcinoma.5

Immature cystic teratomas of the ovary are composed ofpimmature tissues derived from three germ layers, and are histologically distinguished by the presence of immature or embryonic tissues. Management of immature teratomas involves laparotomy and chemotherapy. In a study conducted by Yamoka et al it was reported that the radiographic findings of immature cysticnteratomas are similar to those of mature cystic teratomas, hence it poses a challenge in arriving at a clinical diagnosis.6 Treatment involves unilateral salpingo -oophorectomy and staging procedures, including peritoneal washing, omentectomy, pelvic and para-aortic lymphadenectomy, and multiple peritoneal biopsies.Disease confined to the ovary also needs careful follow- up. In children, 80% are stage I at time of diagnosis and tend to have a good prognosis, regardless of grade. Immature teratomas beyond stage I require postoperative chemotherapy. Current combination therapy is BEP (bleomycin, etoposide, platinum), which has proved to have less recurrence and less toxicity than VAC (vincristine, dactinomycin, cyclophosphamide).7

Conservative treatment of immature teratoma is possible, and does not seem to influence recurrence and survival rates. Furthermore, this tumor is highly chemosensitive. Successful medically assisted pregnancies have been reported after fertility sparing surgical management followed by cisplatin, etoposide and peplomycin chemotherapy. Sterility may still be observed in advanced stages associated with rapidly growing tumors where oophorectomy is mandatory. In these cases, it is advisable to consider cryopreservation of oocytes or embryos before treatment.8

Mature "cystic teratoma are not only the most common germ cell tumours of the ovary, but are also the most common tumors of the ovary itself. Immatureuteratoma primarily affects the younger age group, so it is” important for the clinicians to have a high index of suspicion, whenever the diagnosis of a germ cell tumor is made.” The prognosis and treatment mainly depends on the age of the patient along with clinical staging and histological grading of immature tissues. In patients diagnosed over 45 years of age, the possibility of malignant teratoma should be kept in mind. Early diagnosis and treatment in terms of a conservative surgical approach has a positive prognostic impact.