Cesarean myomectomy (CM) has been a controversial surgical procedure. It is fraught with increased blood loss and its associated postoperative morbidities of anemia, blood transfusion and sepsis or even an unintended obstetric hysterectomy. This case reports a life-threatening hemorrhagic shock in a patient for whom 2 large myomas were extracted during cesarean section. Safety of CM depends on proper case selection with small sized, subserous, pedunculated fibroids and the speed and skill of surgeon.

The prevalence of uterine fibroids in pregnancy is 1.6 -10.7 percent depending on which trimester the fibroid was visualised.1 The fibroid in pregnancy can cause many complications in antenatal, Intarnatal and post-natal periods.

However, the management of a leiomyoma encountered during a cesarean section is controversial. Some recommend doing it and others warn against it. Those fibroids coming in the way of uterine incision and compromising fetal extraction should preferably be enucleated during CS. Ultrasound mapping of large uterine fibroids will help plan out the uterine incision at the time of cesarean. Multiple Leiomyomas, those located in the cornual or fundal location and deep intramural ones are prone to cause massive hemorrhage, more likely in pregnant women since the term uterus has abundant blood flow. Sometimes even an avoidable obstetric hysterectomy may be required. Morbidity like blood transfusion, infections and anemia or puerperal sepsis are increased in the post-partum period. Subserous, pedunculated fibroids are relatively safe to remove.

A 26 -year second gravida with post cesarean pregnancy was booked in second trimester of pregnancy. Her ultrasound revealed a single live fetus of 18 weeks and had 2 fibroids of the size range of 8x8cm. She had an otherwise uneventful antenatal period with mild intermittent pain. Fetus at term was small for gestational age with 9th percentile EFW and normal doppler studies. She was planned for an elective cesarean section, as previous cesarean was less than 2 years ago with a pre-operative Hemoglobin of 12.1 gm/dl. A longitudnal skin skin incision was planned keeping in mind the presence of fibroids and need for good exposure.

During the cesarean section, one anterior (towards right wall) intramural fibroid 8x8 cm was enchroaching the lower segment, incision could be made below the margin of the fibroid and baby extracted after a left upwards extension of incision. As suturing the incision was difficult due to myoma popping from the upper edge of uterine incision, myomectomy was done. The enucleation from wall of uterus was easy but with continuous bleeding as the uterus was also not contracted [Figure 1]. Oxytocics use contracted the uterus and bilateral uterine artery ligation reduced the blood loss. Myomectomy of second anterior myoma 12 x 10cm [Figure 2] was done through same incision after tunneling, there was a huge myoma bed which was meticulously repaired in multiple layers to close all dead spaces. Intraoperative bleeding was 1900ml and operative time 175mins. Bilateral hypogastric artery ligation (HAL) was performed at end of uterine closure. Patient went into hemorrhagic shock with tachycardia (HR 120bpm), BP (84/56), cold clammy extremities and severe pallor immediately after surgery. Massive fluid infusion of the range of 3 litres in 2 hours, 3 units of blood transfusion and 2 units of FFP was done in the next 8 hours. The patient was shifted to HDU and required inotropic support of noradrenaline for 24 hours. She was transfused 2 more units of blood on post-operative day one. Baby was 2250grams and had NICU stay for 3 days as mother was sick. They were both discharged on 6th post-operative day in stable condition. 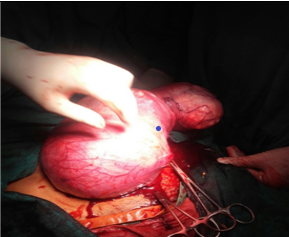 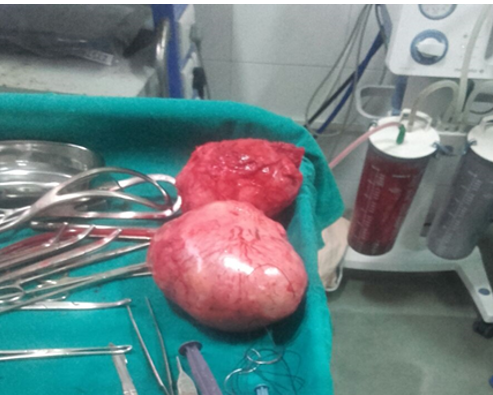 Much confusion is there in attempting myomectomy during a cesrean section. Whether elective caesarean myomectomy or opportunistic myomectomy is feasible and safe, considering the increased morbidity of the procedure. Dedes I et al. evaluated the risk of adverse events in a retrospective cohort of 162 women with fibroids undergoing CS out of which 48 underwent CM, large myoma size(>5cm), age > 40 yrs and multiple myomas were associated with increased blood loss. They concluded that CM performed by an experienced obstetrician in women without additional pre-existing risk factors can be safe.2

Sparic et al. in an appraisal of CM in 2017 reiterated that multiple myomas, deep intramural, fundal or cornual myomas and posterior uterine wall myomas were associated with more surgical complications during CM. CM is generally considered relatively safe in cases of anterior wall myomas, subserous and pedunculated myomas3 In an earlier study he warned about intraoperative hemorrhage in CM in cases of large sized defect of myoma bed and speed of suturing is slow.4

This systematic review and meta-analysis of observational studies demonstrated an association with increased operative time and hemoglobin drop in patients who underwent cesarean myomectomy compared with cesarean delivery alone. No increased rate of major hemorrhage or need for transfusion was identified. Cesarean myomectomy may be considered in cases of isolated myomas, although randomized trials are needed. ncrease in postoperative hospitalization, mild decline in hemoglobin, increased op time.5

A study on 212 CM reported by Senturk showed that there was no difference in the rate of complications, transfusion rates and drop in hemoglobin levels between the cesarean myomectomy group and the non-myomectomy group, and in those with myoma diameter greater than 5 cm.5

Keeping all this in context, Chauhan in a review published in 2018 has recommended for standardization of practices for CM which should include proper case selection, surgical techniques and hemostatic measures. She also emphasizes on accurate reporting of complications, their long-term follow-up, more robust data and calls for larger randomized trials. CM is a safe and viable option especially in low-resource settings where the patient may be spared a repeat surgery and problems of anesthesia and cost associated with it.6

Factors which prompted us in doing myomectomy during caesarean were, fibroid hampering incision suturing. After incision line myoma was removed, edged us for removal of other two also to avoid the second operation and anaesthesia risks by completing myomectomy at the cesarean section. Removal of two myoma, of 12 and 8 cm and their deep intramural position led to life threatening blood loss. As an afterthought of increased morbidity of patient, interval myomectomy would have been a better option.

Although many studies have reported safety of CM, careful consideration of numbers, sizes and location of myomas should be the deciding factor for an elective caesarean myomectomy and the surgeon should be case selective and cautious as complications can be life threatening.