A postmenopausal lady presented with an uncomplicated umbilical hernia and a hugely distended abdomen without any other overt symptoms. A large pelvi-abdominal lump was palpable. CT showed a huge mass which filled up the entire pelvis and most of the abdomen, with a part of it protruding through the umbilicus. Diagnosis was established histopathologically, as a benign mucinous cystadenoma of the ovary.

A 59-year old postmenopausal lady, presented to the gynecological OPD with an umbilical hernia and a hugely distended abdomen (Figure 1). She reported gradual painless distension of her abdomen for the preceding 10 months, unassociated with any gastrointestinal or genito-urinary symptoms; this was followed by gradual protrusion of her umbilicus over the preceding three months. On examination a massive, firm but elastic, pelvi-abdominal lump was palpable; the contents of the umbilical hernia had a consistency similar to the abdominal lump and were irreducible, though not strangulated. A CECT scan of the abdomen revealed a huge multiloculated mass, of ovarian origin, with protrusion of a portion through the umbilicus. (Figure 2). The levels of the tumour markers, CA-125-5, CA 19-9 and CEA, were unremarkable.

The patient underwent a bilateral salpingo-oophorectomy and total hysterectomy with removal of the entire tumor mass. The umbilical defect was closed with polypropylene sutures. Histopathological examination established the diagnosis as a benign mucinous cystadenoma. 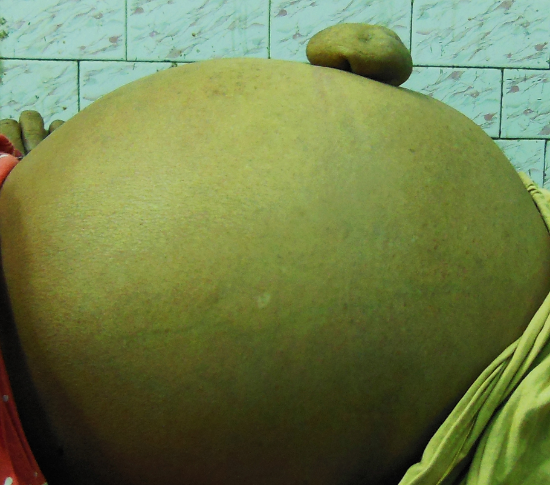 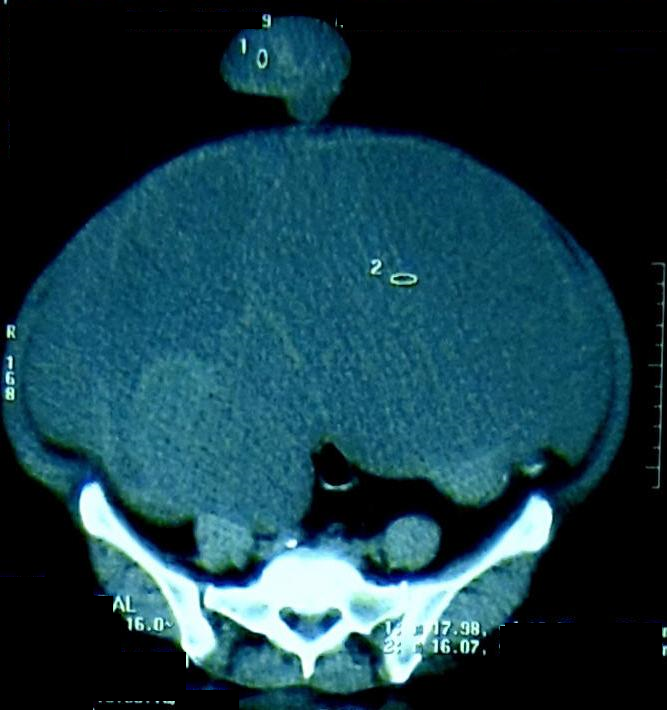 Mucinous cystadenoma of the ovary is a tumor of the epithelial cells of the ovary, with a 10-15% malignant potential.1 Around 10% of these are bilateral.2 These neoplasms more commonly occur in the third to sixth decade but may also occur in younger women.3 They usually present as large, multi-loculated, mucin-filled cysts, with an average diameter of around 18cm.4 Microscopically, these tumors consists of multiple cysts and glands lined by simple non-stratified mucinous epithelium. Sometimes neuroendocrine cells or Paneth cells may also be present. Usually no cytologic atypia and no mitotic figures are seen.5 Owing to the extremely large size of the tumor, it has the potential to fill up the entire pelvis and abdomen, causing complications. Some reports of this tumor presenting with a clinical picture of ascites, exist.6 A number of studies have also reported this tumor to have caused complications like abdominal compartment syndrome.7, 8 Reports of this tumor presenting with an umbilical hernia are very rare; these include presentation with hernial incarceration and with maceration of overlying skin.1, 9 The unique feature of this case was the presentation as an uncomplicated umbilical hernia and the absence of any overt symptoms, other than the massive distension of the abdomen. The fact that all these occurrences are associated with mucinous tumours lead us to believe that, may be, the consistency of the mucin-filled sacs, make it more prone to herniation through preexisting abdominal wall defects.