Twin-Reversed Arterial Perfusion(TRAP) sequence or Acardia twin refers to a unique complication of mono-chorionic twin pregnancy in which a twin with an absent or rudimentary non functioning heart (acardiac twin) is perfused by its co-twin (pumping twin) through a large artery to artery placental shunt, often accompanied by a vein to vein shunt. Here we discussed about a clinical case of TRAP sequence came in established preterm labour and its management.

Multifetal pregnancy is generally categorized under high risk pregnancy even more challenging for obstetrician in case of monozygous twin. It accounts for 1.5% of all pregnancies and leads to 10% of perinatal morbidity and mortality. There are several aberrations in twinning due to incomplete splitting of embryo or early secondary fusion of two separate embryos. These separated embryos are either symmetrical or asymmetrical aberrations in monozygous twins. Asymmetrical aberrations like TRAP, parasitic and fetus in fetu. Multifetal pregnancies is rising trends because of assisted reproductive techniques or elderly conception. Acardia twins is seen 1 in 35000 births.1 TRAP sequence mainly due to abnormal placental vascular connection resulting in perfusing deoxygenated blood into acardiac twin from pumping twin. This leads to malformation as an effect of severe hypoxia. Here a case of multigravida with 27 weeks of gestational age with twin pregnancy in established preterm labour and diagnosed retrospectively as TRAP sequence.

A 32 years old unregistered G3P2L2 with previous two full term vaginal delivery with 7 months antenatal case came to labour room with complaints of recent onset of breathlessness along with tightness due to over distension of abdomen since 2 days without any significant complaint. She was non consanguineous married and conceived spontaneously. Her family ,medical and surgical illness history was insignificant. She was 27 weeks and 5 days of gestation and done only one obstetric scan reported as monochorionic monoamniotic twin intrauterine gestation with one fetus live of approximate 1.1kg with vertex presentation with polyhydramnios amniotic fluid index 29cm and second fetus without cardiac activity formed into a mass due to intense edema(size of mass didn’t mention). On examination, she was afebrile and had tachycardia with pulse rate 146 bpm, normotensive, tachypnoea with respiratory rate 26 per min with saturation maintained. Per abdominal examination revealed over distended and tense uterus with symphysiofundal height of 46 cm and abdominal girth 102 cm. Fetal part could not feel due to polyhydramnios and single fetal heart sound heard by fetal hand doppler with normal rate and rhythm. On per speculum examination there was leak with bulging membrane. On per vagina examination cervix was well effaced and 3 cm dilated. Initially she was clinically diagnosed as twin to twin transfusion syndrome with one fetus demised and other fetus alive in established preterm labour. She was given single dose of corticosteroid intramuscularly and also given intravenous antibiotics. Her covid-19 rapid antigen and RTPCR reported as negative. Her routine lab came normal so ruled out anemia and coagulation disorder. Prophylactically blood products were reserved. After 6 hours she got delivered vaginally live first baby of 900gms with thick umbilical cord with APGAR score 7 at 5mins and admitted in NICU. Actually it was diamniotic so membrane of second fetus was ruptured and there was scanty liquor with footling presentation. There was no progress in labour. Fetal foot started getting broken due to manual traction given. Injection oxytocin drip from low to high dose regimen was continued and there was no improvement. Still her uterine size was nearly fullterm pregnancy and it was tonically contracted. After 2 hours of trial of unsuccessful vaginal delivery, patient was shifted to operation theatre for emergency LSCS under spinal anesthesia with blood products arranged. Intra operatively it was 1.7 kg fetus en mass with four extremities and underdeveloped head with minimal scalp hair with thin umbilical cord suggestive of acardia twins. External examination of the TRAP fetus showed absence of fetal head and rudimentary hair on the upper part of the body, both feet had 4 toes with an absence of small toes. There was single placenta with two umbilical cord of small and large one.

She went to atonic postpartum hemorrhage intraoperatively so managed wisely. Postoperative days were uneventful and got discharded on day 5. First baby had died after 48 hours of NICU admission. Finally it was diagnosed as TRAP sequence- Acardiac-anceps. 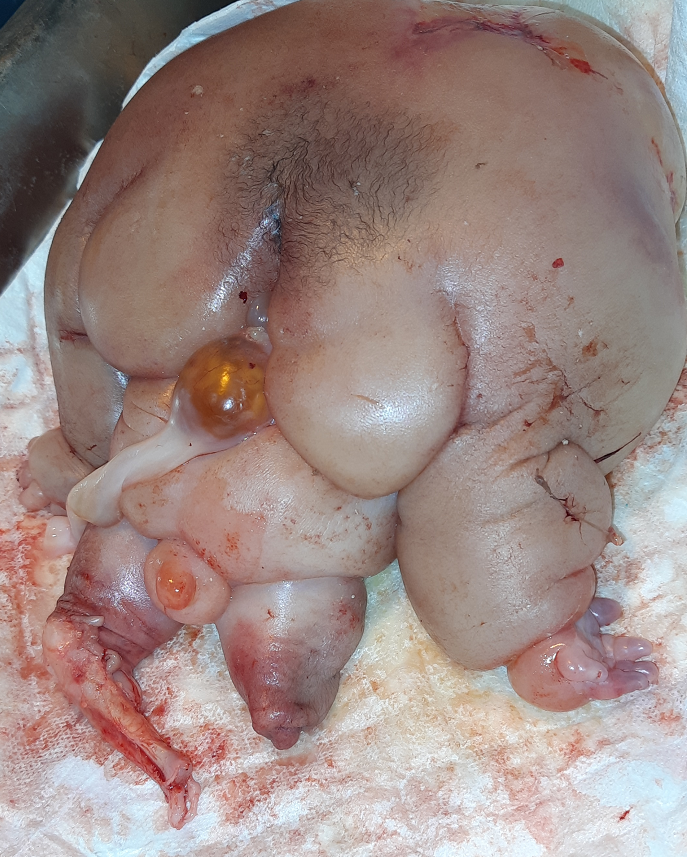 Most of the complications are with mono-chorionic twin gestations due to single placenta. There are serious complication for pumping twins like high output cardiac failure, polyhydramnios related preterm birth and perinatal morbidity and mortality.2 These extremely malformed fetuses without heart at all termed as holoacardia or only rudimentary non functional cardiac tissue termed as pseudoacardia in association with multiple other developmental abnormalities.

Acardiac twins are classified into 4 types by the degree of gross morphologic malformation.3

Type I: Acardiac-acephalus- no cephalic structures, Head and upper extremities are lacking. It is most common variety.

Type II: Acardiac-anceps, where some cranial structure and neural tissue or brain tissue is present. The body and extremities are also developed. It is highly developed form. This is the type seen in the case.

Type III: Acardiac-acormus with cephalic structure, but no truncal structures are present. The umbilical cord is attached to the head. It is rarest form of the acardia.

Type IV: Acardius-amorphous with no distinguishable cephalic or truncal structure. It is very least developed and unable to recognize as a human form with minimal development. This can be differentiated from teratomas only by its attachment to an umbilical cord.

Early diagnosis of acardia twins can be confirmed in first trimester itself by USG and Doppler study. Treatment at correct time improves the survival of the pump twin by 95% with an average age at delivery between 36 and 37 weeks.4 There are lots of newer advancements in management of TRAP sequences such as interruption of vascular connection between twins by means of laser, ultrasound guided thrombogenic agent into umbilical vessels, endoscopic ligation of the umbilical artery and fetoscopic coagulation or ablation of the placental anastomosis. Recently high intensity focused ultrasound (HIFU) has been followed as a non-invasive treatment for occlusion of the blood flow in the acardiac twin. Conservative management can be done until the mean gestational age for delivery is 36 to 37 weeks if acardia twin weighing less than 70% of pumping twin. Termination should be considered if pumping twin has developed cardiac failure and acardia twin is weighing more than 70% of pumping twins.

Still there is lack of awareness of ANC routine check up. Timely diagnosing and anticipating the upcoming events can prevent the unwanted deadly complications. Chorionicity in multiple pregnancy can be determined correctly between 11 to 14 weeks of gestational age. Doppler study should be done for all the high risk pregnancy mainly for monozygous twins to rule out aberrant twinning mechanism. Better health education should be consider for all the women of reproductive age groups.

Sincerest thanks to my husband Dr. Premnath and my beloved family for their intense support.