Preethi, Rajesh, and Vijayakrishnan: A rare case of uterine leiomyosarcoma: A case report

A rare case of uterine leiomyosarcoma: A case report

Uterine leiomyosarcoma is a rare malignant tumor that arises from smooth muscle cells. It comprises of 1% of all uterine malignancy. We report a case of 54 year old Postmenopausal women with 2 episodes of postmenopausal bleeding and was diagnosed with Leiomyosarcoma of uterus.

Leiomyosarcoma is a rare malignant tumor that arises from the smooth muscle cells. These tumors are most common in the abdomen especially in the uterus but can also occur in the skin and blood vessels. The incidence of Uterine Leiomyosarcoma is in the range of 0.5-0.7 per 100000 per women,1 followed by endometrial stromal sarcomas with an annual incidence of 1-2 million per women.1 These tumors are most commonly seen in women above 40 years of age with median age of 60 years. The clinical features are similar to that of leiomyoma and include abnormal vaginal bleeding (56%), palpable pelvic mass (54%) and pelvic pain (22%). Less frequently they can present with hemoperitoneum due to tumor rupture or other symptoms from extrauterine metastases.2 We present a case of Postmenopausal bleeding with Uterine Leiomyosarcoma.

Mrs X, 55 year old, presented to gyneacology OPD with complaints of second episode of postmenopausal bleed following 9 years of menopause. The first episode of bleed was lasting for 4 days, she bleed around 60 ml on total. She did not have any complaints of abdominal pain, loss of weight, loss of appetie, white discharge per vaginum, urinary or bowel complaints.

Her prior menstrual cycles were regular and she attained natural menopause 9 years ago. She has 3 children all born through Normal Vaginal delivery. She was recently diagnosed to have Subclinical Hypothyroidism and is on Tab. Eltroxin 50 mcg. No other comorbidities. No surgeries done in the past.

With all the above findings she was posted for Diagnostic hysteroscopy and curettage. Intraoperative findings were A Endometrial polyp of 2x1x1 cm with stalk of 0.5 cm arising from the left lateral wall of the uterus noted and the same was removed. Right ostia couldn’t be visualised due to a vascular submucous Fibroid of size 3x3 cm arising from the cornua of right side. Left ostia visualised. Rest of the uterine cavity appeared normal. A biopsy was taken from the fibroid and sent for histopathology. The histopathology report was Benign adenomatous endometrial Polyp and biopsy from the fibroid showed Smooth muscle tumor of uncertain malignant potential (STUMP). Immunohistochemistry done showed Ki 67 proliferation index– 8-10%. Desmin, SMA – Positive. Vimentin – positive. 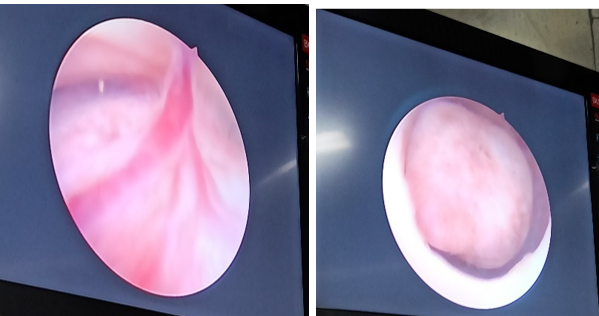 MRI Abdomen and Pelvis was done to look for Myometrial invasion. It was reported as A Fibroid (3.8x 3.4x 3.64 cm) in the right posterolateral wall of the uterus noted with endometrial thickening of 8.7 mm in the endometrial cavity and the margin appears smooth and regular in shape. In Precontrast T1W image – No heterogencity, no haemorrhage on the cystic lesion was seen. T2W images – the lesion is heterogenous and high intensity areas which can be due to hemorrhage. Post Contrast T1W image – Non homogenous contrast enhancement. It appears non enhancing necrotic/ hemorrhagic areas. No nodal involvement. No myometrial invasion, Parametrial invasion. 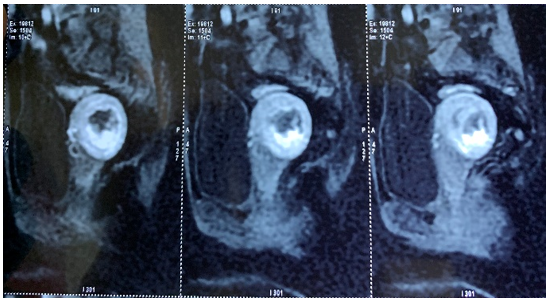 After obtaining Oncologist opininon, she was taken up for Total Abdominal Hysterectomy with Bilateral salpingoopherectomy. Peritoneal washing was taken and sent for cytology. Intraoperative findings include Uterus 8 weeks of size. Bilateral tubes and ovaries normal. 4x4 cm fibroid present in the fundus towards to the right cornual side. Peritoneum and other organs appeared normal.

Cutsection showed A Circumscribed grey white fleshy lesion with areas of necrosis measuring 3.5x3.5x3.5 cm in right fundal region. The Histopathology report was Uterine Leiomyosarcoma stage-1a (pT1aX0M0). The following findings were noted in HPE Coagulative tumor necrosis, severe atypia, No. of mitotic figures - 4-6/10 HPF. There was no LVSI. The postoperative period was uneventful. She was discharged on day 4. She was reviewed 3 months later with PET scan which was normal with no areas of increase uptake.

Uterine Leiomyosarcoma has an ability to mimick benign uterine fibroids, and there is no preoperative diagnostic tool that has sufficient sensibility and specificity to exclude malignancy in women with uterine fibroids. The incidence of sarcomas in patients operated for leiomyomas is 0.23%.2, 3 Uterine leiomyosarcoma comprises ~1% of all uterine malignancies—average age of occurrence being 40–50 years.3, 4 Metastasis from leiomyosarcoma of uterus occurs mainly to lung, liver, brain, kidney, and bones. Secondaries to ovary from uterine leiomyosarcomas are, however, very rare (3.5%).5 On the basis of the FIGO 2009 classification, upto 68% of Leiomyosarcoma s are diagnosed as stage1 and only upto 22% are diagnosed as stage IV.6

The MRI findings for leiomyosarcoma is a large infiltrating myometrial mass of heterogeneous hypointensity on T1- weighted images, with irregular and illdefined margins. On T2 weighted images they show intermediate to high signal intensity, with central hyperintensity indicative of extensive necrosis. After contrast administration, they present early heterogenous enhancement due to the aforementioned areas of necrosis and haemorrhage.7, 5, 8, 9 Therefore, the imaging characteristics of the primary lesion, rather than secondary signs of malignancy, will ultimately help in differential diagnosis and drive treatment stratification. While relatively rare, uterine LMSs carry a poor prognosis even when confined to the uterus, as they are responsible for a quarter of the deaths from uterine malignancies, with 5-year survival rates ranging from 46–53%. Additionally, LMSs also have a 50–70% rate of recurrence with up to 40% occurring in the lungs and up to 13% in the pelvis. Local recurrences are salvageable with surgery. Isolated pulmonary metastasis can also be resected, with overall survival of 45% and 35% at five and 10 years, respectively.10, 6

Uterine Leiomyosarcoma is a rare malignant tumor which arises from the smooth muscle cells of the uterus.

It comprises of 1% of all uterine malignancy. Although the possibility of leiomyoma turning into leiomyosarcoma is only 0.2%, it must always be suspected in a postmenopausal women with submucous fibroid or postmenopausal women with fibroid showing increased vascularity. Surgery is the primary treatment for leiomyosarcoma and the 5-year survival rate for Stage 1 is 50% as it an aggressive tumor with poor prognosis. Currently, there is no proven benefit of using further chemotherapy or radiotherapy after complete surgical removal. The treatment for metastatic and recurrent disease needs to be determined by case to case basis.