Materials and Methods: This study was a retrospective cohort study. Which was conducted in the Department of Obstetrics and Gynaecology, Government Medical College, Kozhikode. Data were collected from Department Medical Records Library. Data consisted of study group with maternal age above 35 years and control group with age less than 35 years. Cases beyond 28 weeks of gestation, both primiparous and multiparous patients were included. Minimum 262 patients were included in each group. Gestational age, presentation, mode of delivery, indications for caesarean, maternal complications and fetal outcomes were analysed. Statistical analysis was done by SPSS16.0 statistical software.

Conclusion: Increasing incidence of maternal complications both obstetric and medical were observed in the advanced age mothers (AMA). There was a significant increase in preterm labour, increased caesarean delivery, PROM, PPROM, gestational hypertension, gestational diabetes, VLBW babies, intrauterine death in these elderly mothers. Due to the increase and advances of infertility treatments has made it common for mothers to become pregnant even at late forties.

Advanced maternal age (AMA) is defined as childbearing in a woman over 35 years of age and is a growing trend in high income countries. In many contemporary studies, the cut-off for AMA has been changed to the age of 40.1, 2, 3 The trend of pregnancy occurring in mothers of advanced age is most commonly due to older primi gravid women who delay childbearing by lifestyle choice or due to underlying subfertility, but also includes multiparous women continuing childbearing. This is also due to advancements in assisted reproductive technologies.4 The prevalence of advanced maternal age was 17.5% in a retrospective comparative study conducted in South Africa.5

Delayed childbearing is believed to be associated with an increased rate of obstetrical and perinatal complications, i.e greater risk of congenital disorders, placenta previa, ectopic pregnancy, spontaneous abortion, stillbirth, preterm birth, induction of labour, caesarean delivery and small for gestational age (SGA) unlike younger women. Prevalence of chronic medical conditions like diabetes mellitus, hypertension and other diseases with a possible influence on a course of pregnancy (such as cancer) are higher among older patients.6 Multiple studies suggest that the incidence of perinatal complications only begins to increase after the age of 35, but the most significant increase in incidence can be observed after the age of 40.7, 8 AMA also results in neonatal complications, such as low Apgar score, NICU admission, preterm delivery, low birth weight, birth defects, chromosomal abnormalities and perinatal death.9, 10, 11, 12, 13 Fertility in women starts to decrease in the early thirties and even decreases faster after mid and late thirties. Women with advanced age usually have a relatively lower tendency to achieve pregnancy within a short period. The probability of achieving pregnancy in a single menstrual cycle, i.e fecundability, is decreased in these group of women.14, 15

To determine the risks of pregnancy in advanced maternal age and study the adverse maternal and fetal outcome.

Study period was during January 1st 2017 to December 31st 2017. All mothers with age 20-35 years as control group and ≥35 years as study group, who had either vaginal or caesarean deliveries were included. Women with multiple pregnancies were excluded from study.

The still birth rate among mothers ≥ 35 years and 20 – 34 years was 8.5% and 2.8% respectively by study conducted by Salihu HM et al,16 expecting similar rates, the sample size required calculated by the below formula: 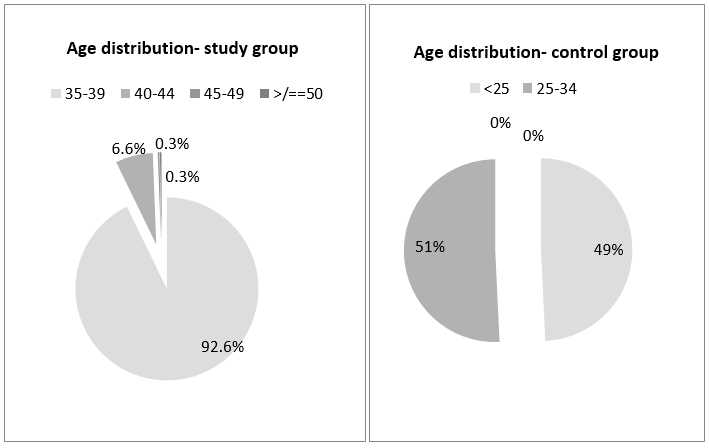 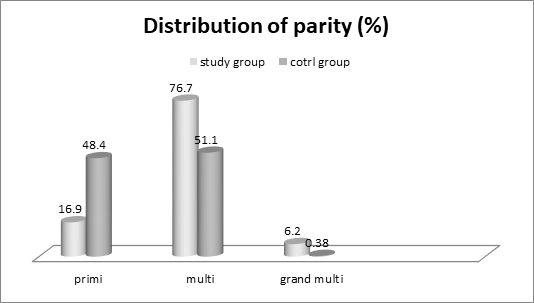 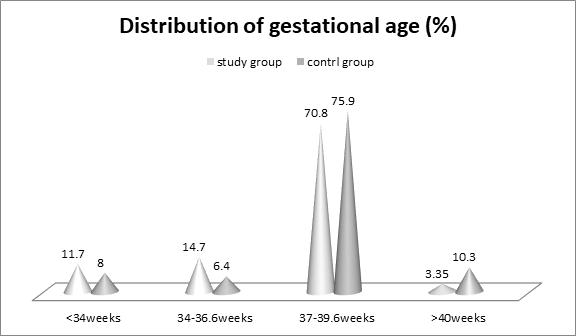 95.2% of fetuses in study group were in cephalic presentation, 4.4% of breech and 0.36% transverse lie. In the control group 92.7% cephalic, breech 6.8%, transverse 0.38%. In the patients of age more than 35 years 51.2% had caesarean and 49.4% delivered vaginally. In the control group 63% delivered vaginally, 37% delivered by caesarean. Of the LSCS 56.8% were done as emergency and 43.1% as elective. And in control group as 67% emergency and 32.9% as elective. Caesarean rate was significantly more among advanced maternal age, RR=1.38(1.13-1.67), p = 0.001 and this is statistically significant. Of the vaginal delivery group there were 11 cases of assisted breech delivery and 6 instrumental delivery in patients above age 35 years. In the control group 2 cases of assisted breech delivery and 4 instrumental delivery. (Table 1).

Incidence of infertility among advanced maternal age mothers was about 7.7%, compared to 2.67% in control group. RR= 2.88 (1.24 -6.66) p value 0.009 which is statistically significant. Among the study group majority belonged to primary infertility, only 4.7% cases belonged to secondary infertility. 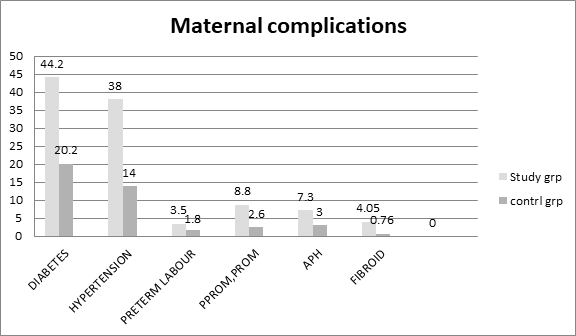 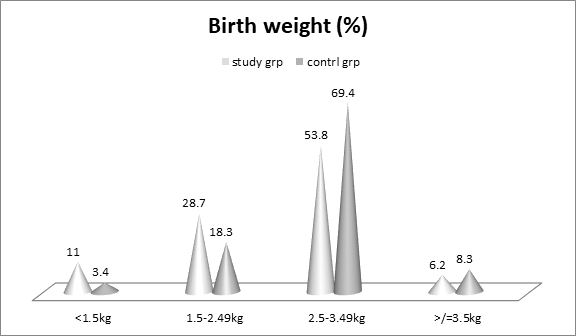 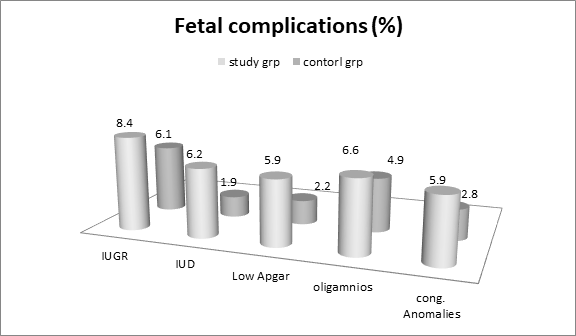 When analysed among the study group patients with comorbidities and without, there was an increased incidence of preterm deliveries and babies born with low APGAR scores in advanced maternal age mothers with comorbidities. RR for preterm labour is 2.31 (1.49 – 3.81) p value = 0.0001 which is statistically significant. But p value for low APGAR score is statistically not significant.

In this study of pregnancy outcome in advanced maternal age, the incidence of mothers with age above 40 years is 7.2%, increased compared to previous years. Of the women in the study group 92.6% belonged to age group between 35 to 39 yrs and 6.6% between 40 to 45years which is similar to the observation in the studies by Sobotka, Shan D et al. and Hamilton BE et al.17, 18, 19 This is mainly due to increased acceptance of advanced infertility treatment like assisted reproductive techniques, changes in female attitude towards education career importance. When analysed based on parity, increased incidence of multiparity was observed in advanced maternal age group and nulliparous mothers were of 16.9%, and almost equal incidence of nulliparous 48.4% and multiparous mothers 51.1% in control group. Incidence of preterm delivery was high in advanced age mothers in this study also i.e 25.8% in study group and 14.5% in control group. Advanced maternal age is an independent risk factor for preterm delivery. Medical comorbidities can also increase the effect of advanced age on pregnancy. This similar observation was reported in various studies.20, 21, 22, 23, 24

But unlike most of studies induction of labour was more in control group compared study group.42

In this study of fetomaternal outcome in advanced maternal age, the maternal and neonatal complications were more in study group compared to younger age group women, similar to most of the studies. Even though medical complications were significantly higher, proper antenatal care and timely termination of pregnancy significantly reduced the major adverse outcome of hypertension and hyperglycemia in these women.

I thank the Department medical records library for providing case records for the study. No financial aid was taken for completion of this study. Institutional statistician Dr Ajitha B K helped in statistical analysis of the study. And the study was done after getting Institutional research committee, and Institutional ethical committee approval.

M Guedes MC Canavarro Characteristics of primi parous women of advanced age and their partners: a homogenous or heterogenous groupBirth2014411465510.1111/birt.12089

ME Hoque Advanced maternal age and outcomes of pregnancy: a retrospective study from South AfricaBiomed Res20122322815

ME Hoque Advanced maternal age and outcomes of pregnancy: a retrospective study from South AfricaBiomed Res20122322815