Background and Objective: Anaemia in pregnancy is a public health problem in developing countries. An observational study of anaemic pregnant women was carried out at the Department of Obstetrics and Gynecology from 1st December 2015 to 30th may 2017, to determine the effects of maternal anaemia on the newborn babies according to the severity of anaemia.

Materials and Methods: 314 pregnant women with anaemia were included in this study. Parameters studied were haemoglobin levels, neonatal birth weight, APGAR score, NICU admission and cord blood haemoglobin. Severity of anaemia is determined by additional cutoffs, with severe anaemia defined as a haemoglobin level of less than 7.0g/dl.

Results: Out of 314 patients, 24 patients (7.6%), 39 patients (12.4%), 251 patients(79.9%) were in severe, moderate, and mild category respectively. Mean haemoglobin levels in present study was 8.65gm/dl. 219 newborns (69.7%) were low birth weight out of which 100% babies born to severely anaemic mothers were LBW which shows that with increase in severity of anaemia, birth weight decreases which is statistically significant. 91.7% babies born to severe category had less than 7 APGAR score. 91.7% newborn in severe anaemia were admitted to NICU. 87.5% babies born to severely anaemic women had neonatal anaemia.

Conclusion: Anaemia during pregnancy and its management remains an important issue in perinatal medication. Correct diagnosis and treatment lead to effective management of fetal and maternal risks and improved perinatal outcome.

Anaemia of pregnancy is a global public health challenge affecting two billion of the world’s population, predominant among the vulnerable population such as infancy, childhood and in women of reproductive age group.1 The burden falls predominantly on Asia and Africa with the complex interplay of dietary factors, infectious disease, genetics and other factors determining anaemia status.2 According to WHO, 14% of pregnant women in developed countries, 56% in developing countries and 65-75% in India are anaemic. Also more than 40% of non-pregnant and over 50% of pregnant women in developing countries are affected.3

During pregnancy anaemia is common due to increased demand of iron for the growing fetus and placenta and increased red blood cell mass, which is further aggravated with other factors such as childbearing at an early age, repeated pregnancies, short intervals between pregnancies, and poor access to antenatal care and supplementation. The consequences of iron deficiency anaemia during gestation includes preterm delivery, low birth weight, and perinatal mortality. Reduced level of haemoglobin favour changes in placental angiogenic. Thereby causing decreased availability of oxygen which results in intrauterine growth restriction and low birth weight.

Infants with anaemia have higher prevalence of failure to thrive, poorer intellectual developmental milestones, and higher rates of morbidity and neonatal mortalities than infants without anaemia.4 A strong relationship was found between maternal anaemia and low birth weight babies. Across the world, neonatal mortality is 20 times more likely for low birth weight babies as compared to heavier babies.5 It is also established as an important risk factor for neonatal morbidity.6, 7 Adverse perinatal outcome in the form of preterm and small for gestational age babies and increased perinatal mortality rates have been observed in the neonates of anaemic mothers.8

The study was conducted in Department of Obstetrics and Gynecology of R.D.Gardi Medical College, Surasa, Ujjain, a tertiary care hospital in rural area from December 2015 to may 2017. 314 anaemic pregnant women were included in this study.

All pregnant women with haemoglobin level of less than 11 gm/dl coming in labour at term gestation.

All mothers and babies who satisfied the inclusion criteria were included in the study. Anaemic mothers were classified according to WHO classification into mild (haemoglobin 9.0-10.9 g/dl), moderate (haemoglobin 7.0-8.9 g/dl), and severe (haemoglobin less than 7.0 g/dl) category.

All babies were personally examined for birth weight, APGAR score of <7 at 5 min, NICU admission and neonatal anaemia (haemoglobin <14 gm/dl). All data collected were entered in Microsoft Excel and statistics 16.0 software was used for statistical analysis. For comparison of quantitative variables, one way ANOVA test and linear regression was applied and for qualitative measures chi-square test and logistic regression was applied.

Distribution of women according to degree of anaemia

The distribution of neonatal parameters among study population

The relation of maternal anaemia with neonatal parameters

There is linear relationship between haemoglobin of mother and birth weight of neonate as shown in Figure 1. 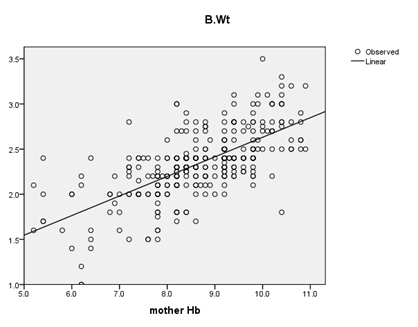 Linear regression equation is given by y=a+bx where y= cord hemoglobin, x=mother hemoglobin,

91.7% newborns in severe anaemia were admitted to NICU whereas only 2.6% and 22.7% newborns were admitted to NICU in mild and moderate anaemia respectively. As the severity of anaemia increases, NICU admission also increases which is statistically significant. 87.5% mothers with severe anaemia had neonatal anaemia whereas 25.5% with moderate anaemia and only 2.6% with mild anaemia had neonatal anaemia, respectively as shown in Table 3.

One way ANOVA table forbirth weight, cord hemoglobin and Apgar score at 5 min according to severity of maternal anaemia

Anaemia is one of the most prevalent nutritional deficiency problems affecting pregnant women. According to Dallman(1987),9 anaemia alters immunity, increases maternal and fetal stress, and it alters the transfer of oxygen from hemoglobin to fetus through placenta. 7.3 million perinatal deaths occur annually in the world,10 and by correcting anaemia many of these deaths can be prevented. Since, the demand for micronutrients is maximum in third trimester and majority of women present for antenatal care in third trimester which could be one of the reasons for high prevalence of anaemia.11, 12

The most common indication for NICU admission being, respiratory distress due to low APGAR scores. The total number of NICU admissions in present study was 80 (25.5%) as compared to Dalal et al (2014)25 and Kheir et at (2016)26 in which NICU admission was 33.03% and 15.8% respectively. 91.7% of neonates born to severely anaemic women were admitted to NICU. There is significant association of NICU admission with increase in severity of anaemia. There is 28 times (95% of CI=8.255 - 91.989) increased risk of NICU admission with increase in severity of anaemia in present study shown in Table 5. According to various studies, risk of preterm birth was 1.7 times and 4 times higher among cases with a statistically significant association, Sangeeta VB et al (2014)16 and Farah Wali Lone et al (2004),24 respectively.

In present study, 86 (27.4%)newborns had neonatal anaemia with mean cord hemoglobin of 15.4 gm/dl. 87.5% severely anemic, 25.5% moderately anaemia and only 2.6% mildly anaemia women gave birth to newborns with neonatal anaemia i.e. cord blood hemoglobin<14 gm/dl. In study by Arti Sareen et al.25 (2013), mean cord blood hemoglobin was 15.09 gm/dl similar to our study. Mothers who had more severe anaemia had babies with lower cord hemoglobin. Previous studies have shown that there is a direct relationship between maternal and fetal haemoglobin17, 18 and the cord haemoglobin is lower in anaemic mothers and that the decrease appears to be proportional to the degree of anaemia, suggesting that placental iron transport mechanisms may not work at higher degrees of maternal anaemia thus leading to a fall in cord haemoglobin.

Anaemia in pregnancy definitely has a very poor outcome on the newborn with increase in severity of anaemia in terms of low birth weight, poor APGAR score, and increase chances of NICU admissions

Government has introduced multiple programmes/schemes for the control and prevention of maternal anaemia. But still the prevalence is high among rural population.