Aim: Fetal movement counting may assist clinicians to intervene at the right time and improve perinatal outcomes, but may sometimes cause unnecessary interventions. A recent Cochrane review in 2015 concludes that there is insufficient evidence to influence practice. This prospective observational study was conducted to evaluate pregnancy outcomes of 103 pregnant women presenting with primary complaints of reduced fetal movements to our Institute.

Results: One hundred and three pregnant women presented with reduced fetal movements, of whom, 65% were term primigravida between the ages of 18-26 years. 47.5% belonged to the high risk pregnancy group. The rates of admission (62.1%), induction (77.7%) and cesarean section (43.7%) were high in this group. Pregnancy outcomes did not differ between single and multiple episodes of reduced fetal movements. Based on risk categorization we found that a single episode of reduced fetal movement was associated with approximately 70% good neonatal outcomes, whereas there was 50% risk of adverse neonatal outcomes with multiple episodes. Though this was clinically significant we could not establish statistical significance for this result.

Conclusion: Reduced fetal movement can occur in both low and high risk pregnant population. Pregnancy outcomes between single and multiple episodes of RFM were not significantly different.

Fetal movement counting may assist clinicians to intervene at the right time and improve perinatal outcomes, but may sometimes cause unnecessary interventions. A recent Cochrane review in 2015 concludes that there is insufficient evidence to influence practice.2 In this study, we tried to find out if the outcomes are different in pregnant women with single versus repeated episodes of reduced fetal movements. We also studied the overall maternal and perinatal outcomes of women presenting primarily with reduced fetal movements.

This was a prospective observational study conducted in the Department of Obstetrics and Gynecology of our Institute from December 2016 to May 2018. The Institutional Ethical Committee approved this study. The study population included antenatal women who presented primarily with reduced fetal movements to our department. Further, the study included singleton pregnancies, with cephalic presentation and gestational age > 34 weeks.

The exclusion criteria were multiple pregnancies, previous lower segment caesarean section (LSCS), placenta previa, abruptio placentae and major congenital malformations in the fetus. A system of convenience sampling was used for including patients for this study.

Informed consent was obtained from the participating women, followed by detailed history-taking with respect to maternal demographics (age, height, weight, BMI), pregnancy related characteristics (parity, gestational age), antenatal risk factors, as well as past obstetric, medical and surgical history. Clinical examination was performed in a systematic manner. All women were subjected to ultrasound examination and non-stress test (NST). The NST was performed with cardiotocogram (Bistos BT-350) in Semi-Fowler’s position. NST was classified as reactive if 2 or more accelerations of more than 15 beats per minute above the baseline and lasting longer than 15 seconds in 20 minutes window period with no decelerations. If these features were absent NST was classified as non-reactive.

Real-time ultrasound scanning was performed using a 3.5 MHz sector probe (GE Medical system Logic Q P5). After general survey of fetus, presentation and placental location was noted. Parameters measured were estimated fetal weight (EFW) and amniotic fluid index (AFI). Ultrasonography (USG) was termed as normal when all the parameters (including AFI & EFW) were within the normal limits. Oligohydramnios was defined as AFI less than 5 cm and polyhydramnios as AFI more than 25 cm. EFW less than 10th percentile of specific gestational age was used to diagnose intrauterine growth restriction (IUGR).

Women who had presented with first episode of decreased fetal movement, and who had reactive NST with normal USG findings, were allowed to go home and advised for weekly follow up. Pregnant women who presented with a single episode of decreased fetal movements at term, and had oligohydramnios or IUGR or persistent non-reactive NST were offered induction. Pregnant women with gestational age between 34-37 weeks of gestation, who presented with a single episode of reduced fetal movements, underwent biophysical profile scoring if NST or USG was abnormal. Doppler velocimetry was done if IUGR was present. A course of steroids was given to women with any features suggestive of fetal compromise, and delivery was expedited. Those with normal biophysical profile, were followed up with intensive antenatal surveillance.

Pregnant women who presented with repeated episodes of reduced fetal movement, underwent similar assessment. Decision on whether to induce labor or not when growth, liquor and NST findings were normal was made after consultant-led counselling of the pros and cons of induction on an individualized basis. All the pregnant women were followed up till delivery.

All data were entered into MS Excel 2011. Privacy and confidentiality was maintained. All numbers that could identify patients, and information related to her, were stripped and replaced by anonymous numbers. Data was entered and analyzed using SPSS 17.0, while MS Word and Excel were used to generate graphs, tables etc. Mean (SD) and median (IQR) were used to summarize continuous variables and proportions to summarize categorical variables. Chi square test was used to compare proportions.

Among the 51 continued pregnancies, 35 delivered on further visits and 16 of them presented with further multiple episodes of reduced fetal movements (Figure 2). Among the 103 antenatal women, 20 presented to our hospital for the first time with multiple episodes of reduced fetal movements. All of them delivered at the initial admission. Table 1 shows the age, BMI and parity details of the study participants. The mean age of the study participants was 25.9 ± 3.8 years. Most of them were overweight (29.1%) and obese (35%) and only 35.9% had a normal BMI.

Gestational hypertension (21.6%) was the most common risk factor among the study participants, followed by gestational diabetes mellitus (18.5%) and hypothyroidism (18.5%). Among study participants with reference to AFI, nearly 35% of the pregnant women had oligohydramnios with an AFI of < 5 cm and 65% had AFI more than or equal to 5 cm. Anterior placenta was seen in 28.2% and posterior in 17.5%.

More than half (77.7%) of the pregnant women were subjected to induction. Only 22.3% had spontaneous onset of labor. Among total pregnant women, 46.6% had normal vaginal delivery, 43.7% underwent LSCS and 9.7% of had instrumental delivery. The most common indication for induction of labor was oligohydramnios (23.7%), followed by non-reassuring fetal heart rate (20%), post-dated pregnancy (12.5%) and premature rupture of membranes (PROM) (12.5%). Five women were induced for presenting with multiple episodes of reduced fetal movements. Most common indication for LSCS was fetal distress (66.7%), followed by CPD (20.1%), failed induction (8.8%) and non-progression of labor (4.4%). 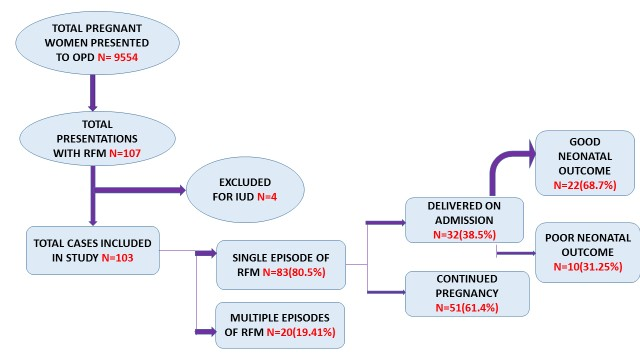 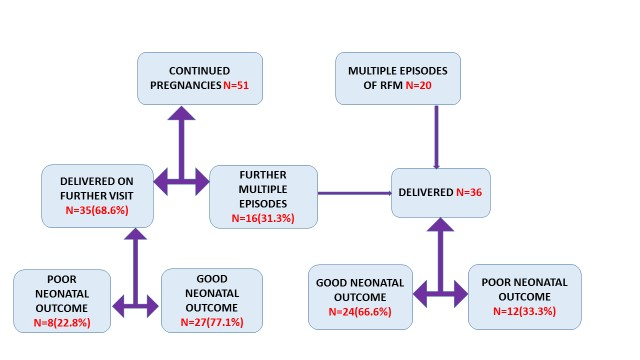 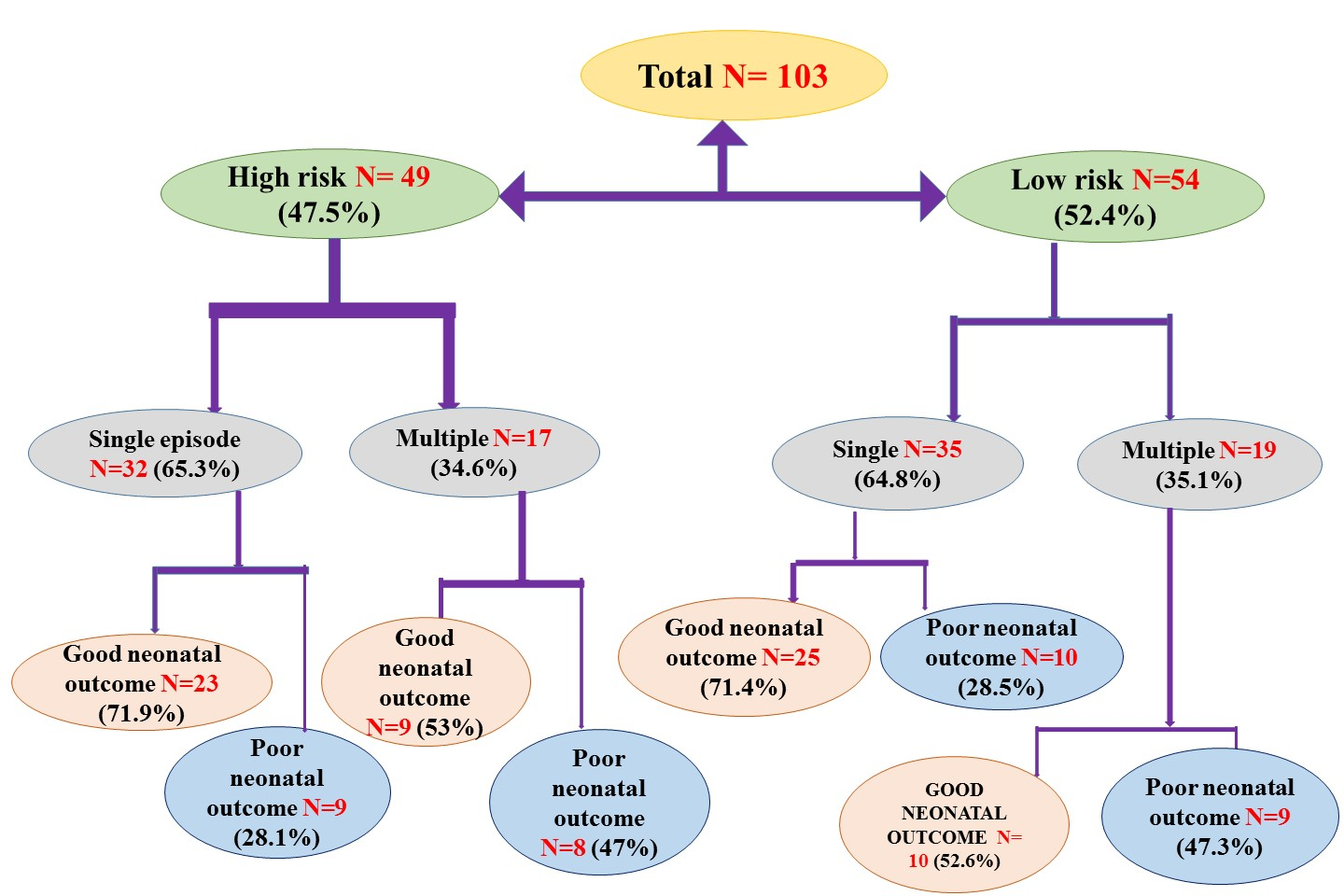 Based on our study, the majority (65%) of the patients who presented with reduced fetal movements were primigravida. This was due to less experience and lack of awareness on normal perception of fetal movements than multigravid women. Similarly in a study by Poojari et al on 210 pregnant women, 75% were primiparous.4 Similar findings were also observed in a study on maternal characteristics and outcome with reduced fetal movements by Holm Tveit et al. in 2009, who suggested that maternal inexperience in these women can be an added risk factor for their pregnancies and better tools are needed to increase their awareness.5

We were unable to demonstrate any statistical significance for this, which may be due to our small sample size. Larger studies are warranted to test this intervention strategy. Similar to our study Poojari et al. commented that fetuses who belonged to low risk group mothers who presented with a single episode of RFM and had abnormal biophysical profile had good outcomes. 4

We therefore believe that low risk pregnant women presenting with a single episode of reduced fetal movement can be expectantly managed with repeat biophysical profile. Those parturients with 2 or more episodes of reduce fetal movements, even if low risk, gave birth to neonates who were more compromised at birth, when the biophysical profile was abnormal, and therefore, these women should have timely delivery to avoid stillbirths. A comparison of the pregnancy outcomes between our study and others has been summarized in Table 7.

Our study has important limitations. First, as stated above, the sample size was small. Second, the study was based only on individual perception of reduced fetal movements, as there is no consensus on its standard definition. Third, we have not studied the effect of other maternal characteristics like educational status, daily exercise or working hours of pregnant women on perception of reduced fetal movement. Fourth, we have included women only after 34 weeks of gestation and hence our findings cannot be extrapolated to the entire third trimester of pregnancy.

S Neldam Fetal movements as an indicator of fetal wellbeingLancet19801818012224