Methodology: It is a case control study. 70 G2A1 were taken as cases, 70 G2P1L1 were considered as Control. The adverse pregnancy outcomes like preterm labour, PROM, IUGR and oligohydramnios and neonatal outcomes like poor Apgar score, low birth weight, NICU admissions and neonatal complications were noted compared and analysed between the two groups. Chi-square was used to find association between clinical variables. Independent t-test was used to compare the outcome measures between the groups.

Conclusion: Study shows that there is increase in adverse obstetric and perinatal outcomes in pregnancies which are following a single spontaneous abortion. Hence a prior spontaneous miscarriage is a risk factor for the adverse outcome in subsequent pregnancy, therefore careful prenatal care in such pregnancies are mandatory to avoid adverse pregnancy outcomes.

Spontaneous pregnancy loss is a common complication, occurring in 8 to 20% of recognised conceptions, it is a pathologic process resulting in unintentional termination of pregnancy prior to 20 weeks gestation. 80% of these abortions occur in first trimester. 1, 2, 3

Chi-square test was used to find the association between clinical variables by groups. Independent t-test or Mann-Whitney U-test was used to compare the outcome measures between the groups. P value less than 0.05% was considered statistically significant. Statistical analysis was performed using SPSS version 20.0.

This clinical study was conducted at K.V.G. Medical College. Women who have a history of one spontaneous miscarriage preceding the current pregnancy were the case group. The risk factors studied were the incidence of low birth weight, preterm delivery, PROM, oligohydramnios and neonatal complications in this group, mode of delivery. These were compared with an equal number of women with history of one full term live birth and no spontaneous abortions preceding the current pregnancy who were taken as control group.

140 total women who were admitted for delivery were included in the study.

The incidence of Oligohydramnios in case and control groups was 10% and 1.42% respectively. This has a p value of 0.029 which is statistically significant.

There was no significant difference in number of Preeclampsia patients in cases and control group accounting for p value of 0.649.

In the case group 8.57% cases had GDM, but in the control group only 1.42% cases were complicated by the same. There is a statistically insignificant with a p value of 0.05.

Cases group showed higher number of Lower Segment Caesarean Section compared to control group which is statistically significant with p value of <0.01. Most common indication for LSCS was foetal distress and non-progression of labour accounting for 41.93% each. In control group most common indication for operative delivery is non-progression of labour 71.42%. Operative delivery was more in cases group compared to control group and it was statistically significant. Comparision of frequency of PROM in both the groups did not show any statistical significance.

Comparison of APGAR score at 1st minute between the two groups 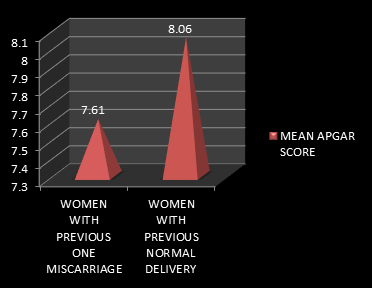 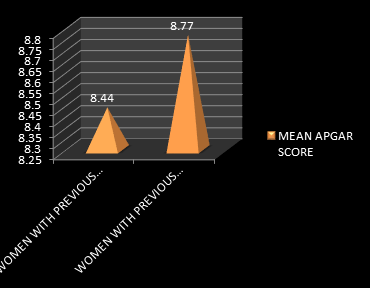 Prevalence of low birth weight is found to be significantly higher in cases group when compared to control group which is statistically significant in our study with p value of 0.04.

Comparison of frequency of children with NICU admission

The two groups were observed and studied for the prevalence of adverse outcomes like oligohydramnios, preterm delivery, low birth weight, foetal distress, NICU care and other maternal complications.

In our study Oligohydramnios was present in 10% of cases, 1.42% of Control which was found to be statistically significant (p < 0.029%). Study conducted by Weintraub A Y et al7 also had similar results.

Premature rupture of membranes was another major outcome studied. PROM was observed 10% in both Cases and Control group which was statistically insignificant. Study by Weintraub A Y et al7 showed statistically significant PROM in Case population.

Mode of delivery includes was compared in both the groups. In our study it was observed that around 80% in Control group had spontaneous delivery compared to 55.71% in Case group which was statistically significant (p< 0.004%). Caesarean section in Case group was 44% compared to 10% in Control group which was statistically significant (p < 0.01%). Similar observations were seen in study conducted by Weintraub A Y et al7 and Kashnian5 where higher Caesarean rates found in women who had previous abortion.

The mean birth weight in Case group was 2.77 kg to 2.91 kg in Control group which was statistically insignificant similar to observation of Weintraub A Y et al.7 Low birth weight was observed in 22.85% of Cases compared to 10% in Control group which was statistically significant (p < 0.04%). Studies by Alberman E et al,8 Ruth M P et al.,9 Basso et al10 had similar observations.

More number of babies in the Case group had low APGAR score at 1st and 5th minutes when compared to control groups which was statistically significant (p < 0.009% at 1st minute and < 0.03% at 5th minute). In Kashanian et al.5 study more number of babies in Control group had low APGAR score but it was statistically insignificant.

In our study, number of children with NICU admission was significantly higher in Cases population compared to Controls. Around 25.7% of children in Cases group had NICU admission compared to 2.85% in control group which was statistically significant (p < 0.01%). This finding is attributed to increase in Preterm labour, IUGR and Low Birth Weight babies in Case group. It was also observed that Foetal distress was significantly high in Case group. Study by Weintraub A Y et al.7 there were significantly more number of cases of Foetal distress in abortion cohort. In our study there was one case of perinatal mortality it was an Intrauterine Foetal Demise at term and examination of foetus and placenta did not any abnormality. Similar study conducted by Kashanian et al.5 showed increase in congenital anomalies and Intrauterine Foetal Demise in abortion group.

Incidence of Preeclampsia was statistically insignificant when compared with two groups. When the incidence of GDM was noted in the present pregnancy significant higher number of women in Case group had GDM 8.5% compared to that of Control group who had incidence of 1.42% of GDM patients. This observation is similar to that seen in Weintraub A Y et al.7

There was no significant difference between two groups in terms of incidence of Anaemia and Rh-negative pregnancies.

The results of our study are quite similar to that of the study by Weintraub AY et al.7

Overall, the results of our study show higher risk of adverse pregnancy and perinatal outcome following an initial abortion.

a) Placental dysfunctions as such are more common in primigravida. So, the comparison with second gravid with full term live birth rather than primigravida is confounding. b) Certain amount of recall bias about the details is unavoidable as part of the data collection was retrospective. c) Psychological impact of the initial abortion on the mother and its effects on the subsequent pregnancy was not considered in our study.

The results of the study show significant increase in adverse obstetric and medical outcomes like preterm, oligohydramnios other outcomes like PROM, GDM, preeclampsia were found to be increased in abortion group but were statistically insignificant. The study also showed statistically significant neonatal adverse effects like low birth weight, low APGAR scores, increased NICU admissions in abortion group. Increased incidence of LSCS and increased requirement for induction and vacuum assisted delivery was found in abortion group. Study also showed increase in adverse pregnancy outcomes with low interpregnancy intervals. Conclusion of the study is that spontaneous pregnancy loss should be considered as high-risk pregnancies expecting this high risk as adverse outcomes. Nevertheless, further research would be required before recommending careful surveillance in these cases.