Sharda and Agrawal: Various modalities of induction of labour and its feto-maternal outcomes: An observational study

Various modalities of induction of labour and its feto-maternal outcomes: An observational study

Introduction: In order for induction to be successful, it should result in labour with adequate uterine contraction and progressive dilatation of cervix with the outcome of a vaginal delivery with minimal risk to both mother and foetus. Primary outcome of the current study was to compare various modalities of Induction of Labour, alone or in combination & to evaluate the different outcomes of mother and baby.

Materials and Methods: History, general, obstetrical, vaginal examination to record Modified Bishop score, basic investigations and recent obstetric ultrasound was noted of 200 pregnant mothers and the results were analyzed. Foetal monitoring was done in all except those with confirmed IUFD cases. Methods used were Dinoprostone, Misoprostol, Oxytocin, Amniotomy and Mechanical Dilatation with Foley’s catheter; single or in combination with each other.

Labour induction is a clinical intervention which benefits the mother or new-born when continuation of pregnancy poses a risk or danger to the outcome of pregnancy. Induction of labor (IOL) is certainly one of the most frequently performed obstetric procedures in the world. The goal of success in induction of labour is to achieve a spontaneous vaginal delivery with the possibility to initiate adequate uterine contractions, favourable cervical changes without hyperstimulation, foetal compromise or distress within reasonable time frame and with minimum maternal discomfort. With this background, the present study was planned.

The primary endpoint of the study is to compare various modalities of induction of labour and evaluating the different outcomes of the mother and baby in developing countries. The search for an induction method that modulates the unfavourable to favourable cervix without stimulating any foetal or maternal complications and which improves the ultimate goal of induction almost eliminating the risk to the foetus remains the Holy Grail.

This was a prospective observational study carried out on 200 pregnant mothers admitted to the labour room in the Department of Obstetrics & Gynecology, Institute of Medical Sciences, Banaras Hindu University(BHU), Varanasi, India between July 2018 and June 2020 requiring induction of labour and fulfilling the inclusion criteria were selected. The study was initiated after approval by the institutional ethics committee.

All the pre-requisite before induction of labour was done. General history, obstetrical, pelvic assessment, vaginal examination to record modified Bishop score, basic investigations and recent obstetric ultrasound was recorded and analyzed. Fetal monitoring was done; except for those with confirmed Intrauterine fetal demise (IUFD) cases.

Materials used were Dinoprostone gel 0.5mg (repeated up to 3 doses, 6 hourly), Misoprostol (25 mcg vaginally; 4 hourly up to maximum 5 doses), Oxytocin (standard low dose), Early Amniotomy (<4cm dilatation) and Mechanical Dilatation with Foley’s Catheter. Though method of induction was decided by the consultant, as a general rule with a Modified Bishop score of 5, induction with prostaglandins or mechanical dilatation were done. Oxytocin and amniotomy was preferred with a more favourable cervix. As this was a purely observational study, all agents single or in combination were included and the results were analyzed. Monitoring & progress of labour was done with the help of WHO modified Partograph and cardiotocography(CTG). If patient had inadequate uterine contractions then augmentation was done with oxytocin, which was not included as a part of induction of labour.

200 pregnant mothers who were undergoing induction of labour were selected in this study.

Refusal of consent for inclusion in study.

The most common indication of induction was crossing of dates (47%), followed by oligohydramnios (16%), premature rupture of membranes (14%) & obstetric cholestasis (14%), pregnancy induced hypertension (10%), IUFD (7%) etc. Elective induction was done in 10% of the cases.

Out of vaginally delivered babies, 15.3% were admitted to Neonatal Intensive Care Unit (NICU). Out of the 82 mothers that underwent LSCS, 68.3% of babies were handed over to mother and 31.7% were admitted to NICU. This depicts that there were more complications in the babies who required LSCS. All the pregnant mothers who were induced for Intra-uterine fetal demise were delivered vaginally. Therefore, there was a strong association between outcome of baby and mode of delivery.

Shows outcome of baby in association with mode of delivery

Induction of Labour was done with Dinoprostone gel in 73%, Misoprostol in 31%, Oxytocin in 13%, Amniotomy 6% and Mechanical Dilatation 2%; single or in combination.

After induction with Dinoprostone, 74% of babies were handed over to mother but 21.7% required NICU admissions. After Misoprostol, 25.8% were admitted in NICU. Out of 14 USG diagnosed intrauterine fetal demise, 12 were induced with misoprostol (all delivered vaginally). Oxytocin was method of induction in 12 pregnant mothers, 33.3% were admitted in NICU. Amniotomy was done in concurrent with another method, 15.4% of babies were admitted to NICU. Mechanical dilatation was done only in 4 IUFD babies and were successful (100%).

Majority of the mothers who underwent induction with dinoprostone alone delivered by LSCS (63.4%). There were 18 cases in which induction with Dinoprostone followed by Misoprostol, in which 12.2% had to undergo LSCS while only 6.8% delivered vaginally depicting that the combination of the two yields to more complex outcomes. Dinoprostone with ARM is more successful at delivering vaginally (10.2%).

Out of 22% of babies requiring NICU, 19% were discharged after minimum of 8 hours to a maximum of 5 days of NICU. 15% of babies required Room Air and were kept under observation. Some baby required High Flow Nasal Cannula (4%) followed by Nasopharyngeal Airway (1%), bubble CPAP (1%) and 1% required Mechanical Ventilator. 2% were shifted to Pediatric surgery who had congenital anomalies. However, there was a perinatal mortality of 1% of the total number of babies delivered. Both were due to Meconium Aspiration Syndrome.

Shows outcome of baby in percentage 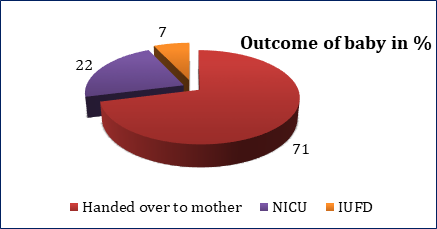 Induction of labour is a stressful situation for the mother and the obstetrician. There is a dilemma and controversy about why to induce, where to induce, when to induce and how to induce? With the apparent rising trends in Induction of Labor in the last few decades, the use and abuse of induction has become a source of heated controversies. There are various controversies regarding the relation of Bishop score and method of induction, advantages of induction over spontaneous labour, appropriate gestational age for induction, single or combination of method, method of induction in specific circumstances and the outcomes of mother and foetus.

After comparison with other studies and our study, we conclude that maternal age is an independent predictor of labor induction success affecting the duration of labor and mode of delivery. Being a tertiary referral hospital, our study comprised of mainly unbooked patients (66%). This is in contrast with study done by Osaheni Lucky Lawani1 (2014), where the vast majority (86.2%) were booked and received antenatal care. In our study, most of the induced age group was in between 20-30 years of age with primigravida being 62%. 41 pregnant women underwent LSCS after induction of labour, out of which majority (90.2%) were primigravida. Same was observed in various studies done by Bukke.2

In 200 induced pregnant mothers in our study, 59% delivered vaginally whereas 41% undergone Caesarean section. There was no instrumental delivery in our study. This is in contrast of two recent study done in 2017 by Chawla S3 and Acharya,4 where only 27.1% and 33.2% respectively underwent LSCS; whereas in our study caesarean section was done in 41% of total induced women. Therefore, we can conclude that the rate of Caesarean section after induction in our hospital is higher (41%) than other studies compared.

In our study, vaginal misoprostol (25 mcg) was applied (31%) maximum up to 5 doses; mostly in cases of rupture of membranes, crossing of dates, IUFD etc. After evaluating our study, we found a successful vaginal delivery only in 58.06% with the use of Misoprostol. This is in contrast with a study done by Sharma DD6 who found vaginal delivery was successful in 72% after Misoprostol.

Oxytocin was used in only 12 patients for induction of labour, mostly in combination with prostaglandins or amniotomy in our study; mostly in cases of favourable cervix. Low dose regimen was used in our hospital which was then titrated to reach an effective contraction. In a study done by Acharya,4 there was a success rate of 66% with oxytocin. In contrast, our study had a better success rate with oxytocin (83.33%), but since only 12 patients were given oxytocin, we need to study a larger population.

Amniotomy was used in 13% of pregnant mothers mostly in combination with another agent. A study done by S M Cooley,7 in total 80.5% had a spontaneous vaginal delivery after amniotomy with or without oxytocin. A similar of 76.9% was observed in our study. In our study, only 4 IUFD women were induced via Foley’s catheter with other prostaglandins, a success rate of 100% as both delivered vaginally. Since only four patients were induced by mechanical dilatation; it is difficult to compare with other studies.

We can conclude that in our study, MSAF (19.4%), Pathological CTG (29%), Tachysystole was observed more in Misoprostol but failed induction was seen more in Dinoprostone (13.7%). Similar findings were observed in a study done by Kumari S8 (2015).

In a study done by Rajiv M9 (2011), using dinoprostone for cervical priming followed by vaginal misoprostol not only hastened the progress of labor, with a greater percentage of women delivering vaginally and consequent reduction in caesarean section rate, but also reduced the adverse effects encountered with misoprostol when used alone, namely, tachysystole, uterine hyperstimulation and fetal heart abnormalities. Although this was not observed in our study. 9 women received a combination of Dinoprostone and Misoprostol, 4 delivered vaginally and 5 women were shifted for caesarean section due to Pathological CTG and MSAF. There were 2 cases of perinatal mortality with this combination as well.

22% were admitted in NICU in our study. In contrast to this, a study done by Lamichhane S10 (2016) reported 2.07% and 5.5% of born babies needed NICU admission respectively. We can say that a higher rate of NICU admissions were seen in our study after inductions. In our study, 7% required a respiratory support; in the form of nasopharyngeal airway, HFNC, bubble CPAP or mechanical ventilator which was in contrast to a systematic review done by Robert M11 (2020), where only 3.1% required neonatal respiratory support.

However, there was a perinatal mortality of 1% of the total number of babies delivered. Both babies had Apgar score of <7 in 5 minutes. One of the babies required intubation and mechanical ventilator support, the other was on bubble CPAP in NICU. Despite all necessary interventions within 48 hours both babies expired and cause of death was Meconium Aspiration Syndrome (MAS). Both these cases were induced both by Dinoprostone followed by Misoprostol. So, we can conclude that combination of prostaglandins should not be used for induction of labour. Study done by Robert M11 (2020) reported 0.1% of neonatal death in induction groups. Therefore, in our study the perinatal mortality was higher (1%) than other studies.

Labour induction should be done after carefully assessing it’s risks to the mother and the foetus. The variables involved in induction of labour are many and ideally should be evaluated on a case-by-case basis. In our study, combination method (4.48 hours) took longer than single method of induction (2.93 hours) from active phase to delivery. Misoprostol and Mechanical induction were the most preferred method in cases of IUFD. Majority of the patients who underwent induction with dinoprostone alone delivered by LSCS (63.4%) but Dinoprostone with ARM & Oxytocin had a good outcome; so, this should be preferred.

Induction with Dinoprostone followed by misoprostol lead to more LSCS than SVD and there were 1% of perinatal mortality (due to Meconium Aspiration Syndrome), so a combination of Dinoprostone and Misoprostol should be given cautiously according to our study.

Bukke Dr Balaji Naik Ver. I Induction of Labor and the Relationship to Cesarean Section among Primigravida > 41Wks IOSR Journal of Dental and Medical Sciences2016153113116