Materials and Methods: This was a prospective observational hospital based study conducted in the Department of Obstetrics and Gynaecology at a tertiary care teaching hospital. A total of 85 pregnant women were included in the study. Clean catch mid stream urine sample was collected and cultured. The organism was identified and patient was treated according to the antibiotic sensitivity pattern. Patient was followed up till delivery to look for maternal and fetal outcomes.

Conclusion: It is important to do Urine culture and sensitivity in all pregnant women irrespective of the symptoms and gestational age so as to detect ASB as early as possible and by treating this we can avoid the adverse effects in the mother and the fetus.

Progesterone in pregnancy causes changes such as increased bladder volume, decrease in tone of ureter and bladder. Decrease in peristalsis of ureter causes mild hyderonephrosis and urinary stasis which is favourable for the growth of microorganisms causing Asymptomatic bacteriuria.4 In the later trimesters as the gravid uterus enlarges it exerts pressure over the urinary bladder leading to rise in intra vesicular pressure, vesico ureteral reflex and retention of urine which provides suitable medium for the growth of bacteria.4 Glycosuria in pregnancy is due to raised glomerular filterate and inability of the renal tubules to completely reabsorb the filtered glucose and it provides good environment for the growth of bacteria in glycosuric urine.5

“When a same microorganism with colony count of more than 105/ml of urine is obtained in a clean catch midstream urine in a women without symptoms is defined as asymptomatic bacteriuria”.6 Two to eleven percentage of prevalence of asymptomatic bacteriuria have been reported worldwide and in various studies.6 But India being a developing country, prevalence is more due to lack of knowledge, poor sanitation and genital hygiene in lower socioeconomic groups. Due to lack of awareness of the consequences if left untreated it may lead to complications in mother and fetus.7

The association between asymptomatic bacteriuria and pre term may be due to the pyrogens which increases the myometrial activity and also the endotoxins produced from the gram negative bacteria has an oxytocic effect on the myometrium. These endotoxins can cross the placenta and can affect fetus and can cause preterm labour. Rupture of membranes and initiation of labour can occur prior due to the bacterial enzymes like proteases and collagenase. Bacterial endotoxins stimulates deciduas which leads to prostaglandin synthesis which in turn leads to onset of labour.9

The organism responsible for most of the urinary tract infections is Escherichia coli.10 Gold standard diagnostic test for asymptomatic bacteriuria is urine culture. Drawbacks of it is time consuming and expensive.11 Other tests include urine analysis, nitrate test, and leucocyte esterase test which can be used for screening purpose.11

This was a Prospective Observational Hospital based study conducted at Department of Obstetrics and Gynaecology, at a tertiary care centre, Tamil Nadu. Study was conducted from September 2018 to June 2020.

Pregnant women of age group 18 – 45 years of any gestational age.

Method of collection of data

A total of 85 pregnant patients attending antenatal OPD and inpatients of Department of Obstetrics and Gynaecology were included in the study according to inclusion and exclusion criteria. Study was conducted after getting approval from the ethical committee.

Written informed consent was taken from the selected patients. A detailed history of the patient including demographic data which included age of the pregnant women, SES class, obstetric score, gestational age, presenting complaints and history of antibiotic intake, along with past obstetric, medical, surgical history and family history was taken. Complete general, systemic and obstetric examination was done. General examination was done to look for pallor, icterus, oedema, height and weight. BMI was calculated. BP and Pulse was checked to rule out hypertensive disorders. Obstetric examination was done to look for growth corresponding to the gestational age. Routine investigations were done, which included Hb, TLC, platelet count, RBS, urine routine and urine culture sensitivity. All pregnant women included in the study were counselled regarding collection of clean catch, mid stream urine sample in the sterile wide mouthed leak proof container with lid. The sample was transported to the microbiology department immediately and processed.

Urine routine and Urine C/S was done. Urine routine and microscopy was done to look for urine albumin, sugar, pus cells, epithelial cells and casts. Urine culture is proceeded by a standard loop method where a loop of sample is streaked over the culture media (MacConkey and Blood agar) and incubated at 370C for 24 hours to see for any growth. If growth is present it is further incubated and tests such as gram staining, catalase and oxidase test is done to identify the bacteria. Colony counts yielding bacterial growth of more than or equal to 105 organisms / ml of pure isolates were considered as significant bacteriuria. The standard Kirby- Bauer disc diffusion method on Muller Hinton agar plate was used for antibiotic sensitivity testing as per CLSI guidelines. Once significant bacteriuria was detected, a course of antibiotic was given for a period of 7 days according to antibiotic susceptibility pattern and follow up is done after 14 days of start of treatment. A repeat urine routine and urine C/S was done and looked for growth of any organism. The patient was followed up till delivery and was observed for the maternal and fetal outcome such as gestational age of the patient at the time of delivery, type of delivery, birth weight of the baby, 1 minute and 5 minutes APGAR score, NICU admission and duration of the stay of the baby in NICU.

Data was entered into Microsoft excel data sheet and was analyzed using SPSS 22 version software. Chi-square test was used as test of significance for qualitative data. ANOVA (Analysis of Variance) was the test of significance to identify the mean difference between more than two groups for quantitative and qualitative data respectively. p value (Probability that the result is true) of <0.05 was considered as statistically significant after assuming all the rules of statistical tests. 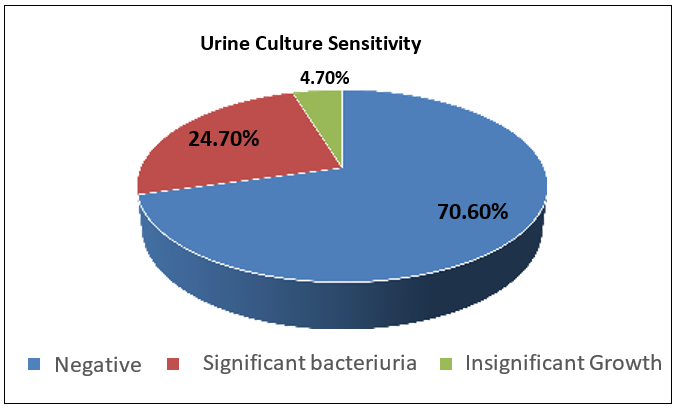 In the study among pregnant women with significant bacteriuria, 5/21(23.8%) had albumin traces in urine and 1/21(4.8%) had 1+ Urine albumin and among women with Insignificant Growth, 2/4 (50%) had Traces of Albumin. There was significant association between Urine Albumin and Urine culture sensitivity.

In the study none of the pregnant women with significant bacteriuria and Insignificant Growth had Urine sugar and Urine casts. 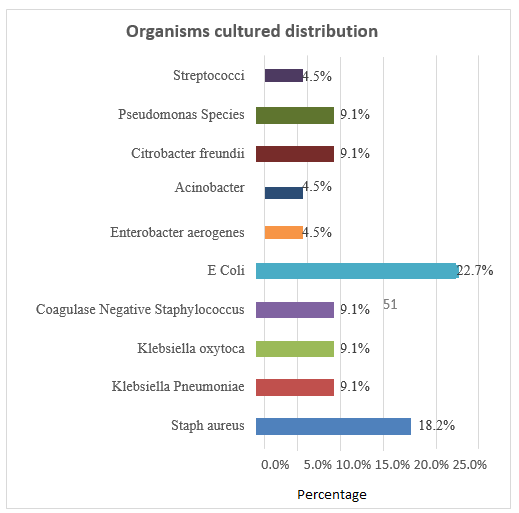 Association between Maternal outcome and Bacteriuria

Association between Perinatal outcome and Bacteriuria

Among subjects with insignificant bacteriuria, all of them (100%) delivered at term, all babies had APGAR score 8 at 1 min, 9 at 5 min and none required NICU admission. There was no significant association between perinatal outcome and Urine Culture Sensitivity.

Asymptomatic bacteriuria is more common in pregnancy and, if left without treatment disease progresses into pyelonephritis and thereby unfavourable maternal and neonatal complications 8. Our study included 85 cases of which 21 were positive for asymptomatic bacteriuria and were treated for 7 days according to antibiotic sensitivity report. Patients were followed up after completion of the treatment and urine routine and culture repeated in them.

In this study, 9/21 (42.9%) of ASB cases were in second gravida followed by 8/21 (38.1%) in primigravida. This is similar to the study conducted by Verma A et al,22 (59.25%) and Gopalan U et al,23 (72.1%). On the other hand, in the study done by Lavanya SV et al,1 66.6% of the ASB cases were primigravida. High incidence in multigravida may be due to the fact that they are repeatedly exposed to urinary stasis which increases the colonization of the urinary tract by micro organisms.24

In this study 85.7% of culture positive cases were in third trimester and 9.5% in second trimester. Similar results had been shown by Patnaik M et al,13 (53.65%). Whereas studies conducted by Sujatha R et al,15 (45.45%) showed more prevalence of significant bacteriuria in first trimester and studies by Kasinathan A et al,25 (68%) and Mukherjee K et al,12(42.86%), showed more prevalence of ASB in second trimester. The high prevalence of ASB in third trimester may be due to enlarged gravid uterus causing urinary stasis and also due to poor genital hygiene, providing suitable environment for growth of micro organisms.26

In this study 71.4% of ASB cases had nil urine albumin, 23.8% had urine albumin trace. According to the study by Ghamrawi R et al.27 Proteinuria is either absent or traces of albumin may be there which is physiological in a normal pregnancy.27

In this study 10 types of organisms were isolated from 21 culture positive cases. two organisms were isolated from one culture positive case. Gram negative organisms were 66.6% and gram positive were 33.3%. E coli was isolated in 22.7% cases which was the most predominant organism followed by staphylococcus aureus in 18.2% cases. Similar result was obtained by Verma A et al,22 and GopalanU et al.23 whereas Enterococcus species was isolated in 26.7% of cases which was the most predominant organism in a study done by Labi A K et al, 28. In study by Patnaik M et al,13 Klebsiella Pneumoniae was the most common organism isolated and staphylococcus aureus was isolated in 50% cases by Dhange SC et al.29 E Coli, the gram negative bacteria was the most predominant organism causing significant bacteriuria in asymptomatic women.30 E Coli are found in bowel as commensal bacteria which contaminates periurethral region and causes ascending urinary tract infections.30 Enlarged gravid uterus and progesterone causes urinary stasis which is suitable for growth of Escherichia coli.31 The pilus adhesions of gram negative bacteria helps in adhering to the uroepithelial lining because of which organsism cannot be easily washed out and the organism multiplies.30

For treatment of UTI in pregnancy Nitrofurantoin is the safe and best drug except nearing term as it may lead to deficiency of glucose 6 phosphate in babies which causes hemolysis.16 Acinobacter (100%), Enterobacter aerogenes (100%), Citrobacter (50%) and Klebsilla Oxytocoa (50%) were resistant to Nitrofurantoin in our study. Staphylococcus aureus, E Coli, CONS and Klebsiella pneumonia were 100% sensitive to nitrofurantoin.

High percentage of term delivery in culture positive cases in our study may be due to early diagnosis and treatment of ASB according to the antibiotic susceptibility pattern. There by we could prevent the adverse outcomes. This is similar to the study done by Jain V et al,6 where they prevented the adverse maternal and fetal outcomes in those cases where early diagnosis of ASB was made and were treated.

The prevalence of ASB in our study was high as compared to the other studies. Urine culture sensitivity even though expensive is considered as the gold standard test to detect ASB. It is important to do urine culture sensitivity in all pregnant women irrespective of symptoms and gestational age so as to detect ASB as early as possible and by early treatment we can avoid the adverse effects in the mother and the fetus.