Genetic factors contribute to 15% of all causes of male infertility. Y chromosome microdeletion is the second most common genetic cause of male infertility. Screening is important for Yq microdeletion as the defect can be transferred to offspring. Aim of our study is to detect the frequency of Y chromosome microdeletion in idiopathic infertile men using both EAA and non EAA markers in central region of India. Forty men from infertility clinic, seeking treatment of infertility were recruited in the study as cases. Thirty normal fertile men of same origin were recruited as controls. Semen analysis was done and cytogenetic normal infertile men were included in the study. Simplex and multiplex PCR methods were used to detect Yq microdeletions. Frequency of deletion was 11/40 (27.5%). Single deletion of AZF a,b,c were 12.5%, 7.5%, 2.5% respectively (Figure 1). Double deletions of AZF a+c and b+c were 2.5% each (Figure 2). Two subjects showed deletion for more than one loci. Overall frequency of deletion depends on sample size, no of markers used, inclusion criteria of subjects and geographic location. So, the screening is important for Yq microdeletion as the defect may be inherited to offspring.

Outcome of pregnancy depends on the characteristics of male and female gametes. If one of them is not in existence or of not good quality, fertilization or quality of embryo formation would be affected. Male factor is responsible for approximately 50% of total infertility. Y chromosome microdeletion is an important factor in the occurrence of male infertility. There are many STS markers available to detect Y chromosome microdeletion. Usually six markers are tested at initial stage after semenogram that are recommended by European Academy of Andrology (EAA) society.1 However other markers may be deleted even if EAA markers are not deleted. Therefore, testing of EAA markers may not serve the purpose in Indian population. Important non EAA markers should also tested along with EAA markers.

The development of male gamete takes place in various stages. Primordial germ cells which form in ectoderm of the bilaminer germ disc of human embryo and move to the wall of yolk sac give rise to spermatogonia. Spermatogonia converts in to primary spermatocytes by repeated mitotic division. Primary spermatocyte by meiotic division(I) develops secondary spermatocytes. Each secondary spermatocytes by meiotic division(II) forms two spermatids. The spermatids becomes spermatozoa by the process of spermiogenesis. This is the final stage in maturation. Overall process of spermatogenesis is regulated by gene present on Y chromosome. Quantity and quality of sperm depends on partial and complete deletion of genes.

Aim of our study is to determine the frequency of the Y chromosome microdeletion in idiopathic infertile men using both EAA and non EAA markers in central region of India. This microdeletion test is important for counseling of couples who opt for assisted reproductive technology (ART) as this defect in gene may get transferred to the offspring.

A total of forty men of Chhattisgarh origin presenting to infertility clinic seeking treatment of infertility were recruited in the study. Thirty normal fertile men of the same origin were enrolled as control. All infertile men and fertile men were of same age group ranging from 22-45 years. Infertile men in principle met the definition of infertility ie one year of unprotected intercourse and not leading to conception (regardless of fertility of partners). These were subjected to comprehensive questionnaire regarding their life style habits like smoking, alcohol and drug abuse, medical history, surgical history, marital age, sexual and family history. Every individual made available a minimum of two semen sample with abstinence period of three days. These specimens were evaluated on the basis of criteria of WHO 2010.2 Informed consent was obtained from every couple. On the basis of mean sperm count, infertile men were grouped in azoospermia, severe oligozoospermia, oligzoospermia and normozoospermia. In addition, blood samples were obtained for DNA extraction.

All cytogenetically normal infertile and fertile patients were subjected for deletion testing. Y chromosome microdeletion were confirmed for eleven STS markers. Eleven subjects showed deletion out of forty cases whereas no deletion was observed in controls. Out of eleven cases, two (18%) showed deletion for more than one loci (Table 2, Table 3). Single deletion of AZF a,b,c were 5/11, 3/11, 1/11 respectively (Figure 1). Double deletions of AZF a+c and b+c were observed in 1/11, 1/11 respectively (Figure 2). Total oligozoospic cases, severe oligozoospermic cases and azoospermic cases were 17/40, 11/40 and 12/40 respectively. Over all frequency of deletion in AZFa, AZFb and AZFc regions were found 7(12.5%), 4(7.5%) and 2(2.5%) cases respectively. 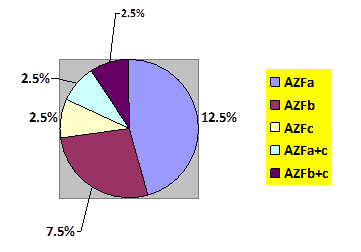 Many causes of infertility are treatable whereas many are not. Most of the genetic causes are not treatable and irreversible. Many males presenting without sperm in ejaculate have deletion of Ychromosome region. These deleted regions include azoospermia factor (AZF) gene. This AZF gene is located in long arm of Y chromosome. Tiepolo and Zuffardi3 first localized factors controlling spermatogenesis in the nonfluorescent portion of the human Y chromosome long arm.

Double deletion was observed in two subjects; AZFa+c and AZFb+c (Table 3). Deletion type AZFa+c is rare. AZFa+c was observed in oligozoospermic case. Only complete deletion of AZFa is associated with absence of sperm.10

Sen et al. stated that frequency of deletion was significantly high in the group using both EAA and non EAA markers.11 Based on this analysis approximately 3.1% cases would be missed if only EAA markers are used. In our study, only one case exhibited deletion of EAA markers out of forty cases and it was double deletion.

Authors are thankful to Chhattisgarh council of science and technology for funding the project (grant number-Endt. No 7068/ CCOST/MRP/2018).