Gupta and Yadav: A clinic biochemical study of status of fasting serum insulin and lipid profile in PCOS patients and to determine correlation between BMI and HOMA index in PCOS patients

The importance of insulin resistance, compensatory hyperinsulinemia, and its effects, many of which have adverse effects on both the metabolic and reproductive organs. Treatment options for insulin resistance/hyperinsulinemia include lifestyle changes, exercise, weight loss, and or the use of thiazolidinediones (TZDs) or metformin. Weight loss measures are essential to the treatment of this condition. Lifestyle, exercise, and dietary changes, weight loss has been shown to reduce hyperandrogenism, increase ovulation and pregnancy rates, and improve immune conflict. Numerous studies have suggested that metformin plays an important role in the treatment of PCOS including restoring ovulation, weight loss, reducing androgen cycle levels, reducing the risk of miscarriage, and reducing the risk of gestational diabetes (GDM).

PCOS patients may develop severe dyslipidemia, such as increased LDL-C and TG levels and decreased HDL-C levels associated with hyperandrogenism, IR, and chronic inflammation. Therefore, statins are widely used in the treatment of PCOS patients to reduce inflammation, oxidative stress, hyperandrogenemia, and other metabolic disorders. Statins have been reported to block HMG-CoA inhibiting mevalonate synthesis, which is a necessary substrate for cholesterol production and can be used to synthesize other important lipid links, therefore, statins can improve lipid status and hyperandrogenism.

Polycystic ovary syndrome (PCOS) is a disease characterized by increased androgen levels, menstrual disorders, and/or small cysts in one or both ovaries.1 The disease contains morphological changes (polycystic ovaries) or biochemical (hyperandrogenemia). Hyperandrogenism, the clinical manifestation of PCOS, can obstruct cord development, cysts formation in the ovaries, maturation, and menstrual disorders.2

PCOS is a serious disease that affects at least 7% of adult women.3 According to research, about 5% to 10% of women aged 18 to 44 are affected by PCOS, so it is very common in endocrine among women of childbearing age.4 Women with symptoms of obesity, acne, amenorrhea, growing hair loss, and infertility are often diagnosed with PCOS. Women with PCOS have higher rates of endometrial cancer, heart disease, dyslipidemia, and type 2 diabetes mellitus.5

Subject with a diagnosed case of PCOS. 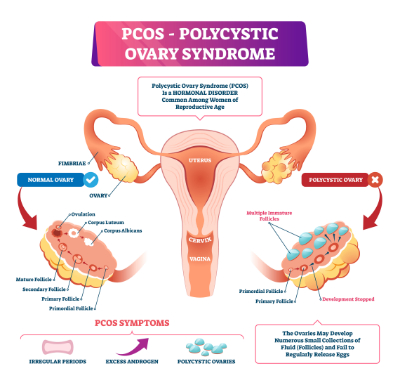 PCOS can be defined as a disease in which several genetic and environmental factors determine physiological, therapeutic, and biological changes.6 Although the genetic etiology of PCOS remains unknown, family history of PCOS is common; however, family communication with PCOS is unclear. Current studies suggest that PCOS patients have a family reunion with a higher autosomal pattern.7

The natural factors involved in PCOS (e.g., obesity) can be exacerbated by poor dietary choices and physical inactivity; infectious and toxic substances can also play a role.8 The reproductive and physiological features of PCOS are sometimes reversed by lifestyle changes such as weight loss and exercise.9

The pathophysiology of PCOS includes impairment in the autotrophic-pituitary axis, alterations in insulin secretion and function, and ovarian function.8, 9 Although the cause of PCOS is unknown, PCOS is also associated with insulin resistance and obesity. Insulin helps regulate ovarian function, and the ovaries respond to elevated levels of insulin by producing androgens, which can lead to ovarian cancer.8 Binding is a prominent sign of abnormal ovarian function.

Clinical symptoms of PCOS include an increase in luteinizing hormone (LH) and gonadotropin-releasing hormone (GnRH), as well as untreated follicular-stimulating hormone (FSH) levels. As a result of the increase in GnRH, stimulation of ovarian thecal cells leads to increased production of androgens.10 Subsequent confinement can be enhanced by providing exogenous FSH. Studies show that PCOS is a fundamental factor in young girls during adolescence and a family history of the disease. About 25% of patients with PCOS have elevated prolactin levels.

Various interventions are designed to reduce insulin levels and the production of ovarian androgen, to improve levels of sex hormone-binding globulin (SHBG).11 This increase in SHBG levels can be used to correct PCOS symptoms. Studies have suggested that thecal cells in PCOS patients produce higher levels of testosterone, progesterone, and 17-hydroxyprogesterone than in normal patients. These cells were modified in PCOS patients with genes cytochrome P450 (CYP) 11A, 3-HSD2, and CYP17 showing higher levels.12 Obesity is a common complication of PCOS but does not need to be diagnosed.

PCOS presents as a phenotype indicating a vicious cycle of neuroendocrine, metabolic, and ovarian dysfunction. PCOS shows the interaction between many proteins and genes influenced by epigenetic and environmental factors (Figure 2). Clinical and chemical hyperandrogenism are important features of PCOS. 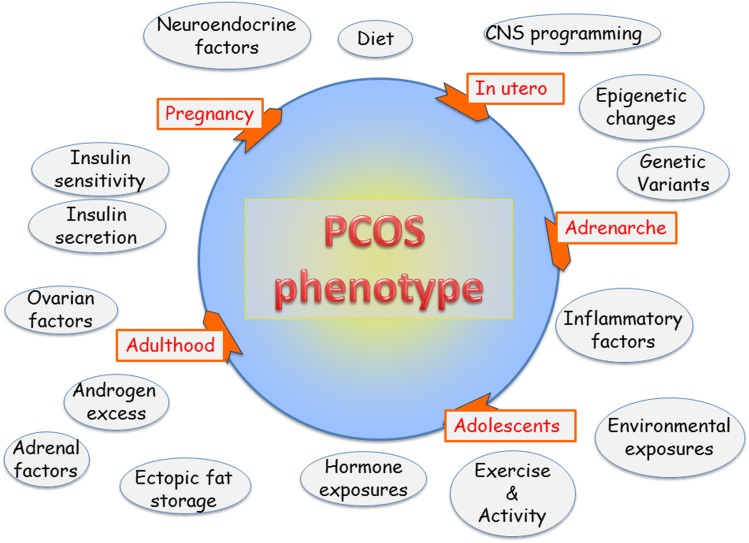 PCOS is characterized by increased levels of ovarian closure and/or adrenal androgen. Internal ovarian factors such as altered steroid production and extracellular factors such as hyperinsulinemia lead to increased ovarian androgen production. Feature factors include more growing follicles in women with PCOS compared with normal controls with the premature binding of antral follicles at 5 to 8 mm. The classic ovarian phenotype of ovarian enlarged with string-of-pearl morphology and theca interstitial hyperplasia shows androgen exposure; this morphology has also been observed in women with congenital adrenal hyperplasia (CAH) and female-to-male transgender individual12 distorted connections between endocrine, paracrine, and autocrine factors involved in follicular maturation may contribute to ovarian dysfunction in -PCOS.

During intrauterine growth, the follicles are larger than meiocytes bound by meiotically surrounded by pregranulosa cells. Therefore, a woman's eggs are exposed to the mother's environment during pregnancy. The ovaries harden slightly until puberty. Ovarian tissue found in preterm and postnatal girls shows differences in follicle morphology and possible growth. Specifically, the prenatal ovaries contain high numbers of invalid ear lobes, which are not found in the pubertal ovaries.13 The physiologic basis of this finding is unclear.

Increased LH pulse frequency, LH pulse amplitude, and increased LH / FSH ratios are found in women with PCOS. The first features of PCOS occur during the first years of adolescence, with the activation of the hypothalamic GnRH pulse generator, the increase in gonadotropin, and the increase in ovarian estrogen production.

Valproic acid (VPA), a fatty chain-fatty acid derived from valeric acid, is used to treat epilepsy, bipolar disorder, and to prevent migraine headaches. VPA raises GABA levels by interfering with the reduction of GABA.14 GnRH neurons express both GABAA and GABAB receptors, signaling the involvement of GABA signaling in GnRH secretion. Signing with the GABAA receptor can produce an exciting response to GnRH neurons.15

Women treated with VPA may have symptoms similar to PCOS. Lean women with PCOS had a much higher concentration of CSF GABA compared to dependent female dependent women; women with PCOS also showed an increase in LH pulse amplitude and LH pulse frequency in normal blood sampling.16

This clinical support suggests that GABA signaling may influence neuroendocrine changes associated with PCOS such as LH pulse frequency.

Women with PCOS have an internal IR with more independence and levels of androgen concentration.13 Women who are more dependent on PCOS show an increase in body mass index (BMI) leading to IR.17 Normal-weight girls with PCOS-weight have IR peripheral, increased liver fat, and mitochondrial muscle dysfunction compared to normal-weight girls.18

PCOS is a hormonal disease that leads to various diseases. It is a common cause of infertility among women.5 Although symptoms and signs vary, the three most common factors associated with PCOS include abnormal ovulation, elevated androgen levels, and multiple cysts in the ovaries. High androgen levels occur in most women with PCOS.19 Hirsutism, acne, and alopecia are directly related to increased androgen levels, and the prevalence of polycystic ovarian morphology in pelvic ultrasound is found in 70% of patients with PCOS.19

In 1990, the National Institute of Child Health and Human Development (NICHD) of the National Institutes of Health (NIH) hosted a team of experts who developed the first known PCOS20 methods. Ten years later, ovarian morphology was found to be a key component in diagnosis. The European Society of Human Reproduction and Embryology (ESHRE) and the American Society for Reproductive Medicine (ASRM) sponsored a workshop in Rotterdam. During operation, polycystic ovarian morphology in pelvic ultrasound was added to NICHD / NIH21 procedures.

In this study, 24% of PCOS patients were obese. In our study, the body mass index between two groups of patients with polycystic ovary syndrome and the control group had a significant difference. In our study, there was a statistically significant association between high serum total cholesterol and low HDL with polycystic ovary syndrome. Also, the mean of serum lipid levels in the case and control groups were significantly different. Of course, when the results were separated based on body mass index, the significant, case group had higher levels than the control group. This is the same as in a study done by Michelle et al.(2011) in which 34.6% were obese.

Results of studies by Dunaif et al.,19 Roa et al.17 in 2009 in Venezuela, Talbott et al., 18 Orio et al.20 in Italy, Legro et al.,21 Erel et al.22 in Turkey, are generally consistent with the results of our study that in all, the levels of serum lipids (total cholesterol, LDL, triglycerides) in patients with polycystic ovary were higher and level of HDL was lower than a healthy person. In the study by Javadian et al.23 in 2011, women with polycystic ovary had higher levels of postprandial triglycerides, postprandial cholesterol, fasting blood glucose, insulin. This is the same as in our study. In overnight fasting, triglycerides and cholesterol were also higher in cases than in the control group.

In the study of Rocha et al.24 In 2011, the incidence of dyslipidemia in patients with this syndrome was twice more than the control group (76.1%) that mostly as a decrease in HDL (57.6%) and increases in triglycerides (28.3%). In our study, the percentage of hypertriglyceridemia among cases was 64% and the percentage of cases with decreased HDL level was 82%. BMI had a significant effect on these disorders. In our study, the prevalence of high triglyceride and low HDL in the case group was more than control. In Nazari et al.,25 studies on 60 women with PCOS and 60 healthy women, insulin level and fasting blood glucose were significantly higher in the case group. This is the same as in our study.

In the study conducted by Jin Ju Kim et al., The optimal HOMA-IR for the diagnosis of metabolic syndrome was 2.64; thus, the metabolic risk was increased at a lower level of HOMA-IR compared with the 95th percentile cutoff. At the HOMA-IR cutoff of 2.64, 34.8% of patients with PCOS had evidence of IR. In our study, we took cutoff for HOMA-IR 3.8 and we found that 92% of PCOS patients had IR.

The present study was conducted to assess the importance of insulin resistance and derangement of lipid profile in PCOS patients.

From the observation of the study, we concluded that :