Uterine torsion of term pregnant uterus due to anterior fibroid

We present a case of uterine torsion caused by a large 7.0x8.0 cm subserosal myoma in a gravid uterus. This is an uncommon disorder where the prospective diagnosis is difficult thus raises challenges in management.

Uterine torsion in gravid uterus is found to carry a substantial degree of risk of perinatal mortality. Leiomyoma is found to be a potential risk factor in these cases. Therefore the diagnosis must not be delayed to prevent complications. Though there are no imaging criteria, CT or MRI can produce a preoperative diagnosis. Uterine torsion can be asymptomatic and in most cases is an accidental finding during cesarian section. Thereby many times cesarian section yields the most certain diagnosis. Posterior low transverse incision is an accessible and effective approach in uterine torsion cases. High degree of suspicion along with swift management is essential factors contributing to favorable outcome.

Uterine torsion has been defined as a rotation of more than 45 degrees of the uterus around its long axis that occurs at the junction between the cervix and the corpus. The extent of rotation is usually 180 degrees, although cases with 60 to 72 degrees have been reported. Etiopathogenesis of the condition under establishing clinical diagnosis of this condition is difficult. Clinical symptoms are either absent or non specific and diagnosis usually made at laprotomy.

Rotation of gravid uterus is normal finding in 3rdtrimester of pregnancy. However pathologic rotation of entire uterus beyond 45degrees is rarely seen in obstetric practice. Herein we report a case of uterine torsion of our obstetric patient along with review of reported cases. 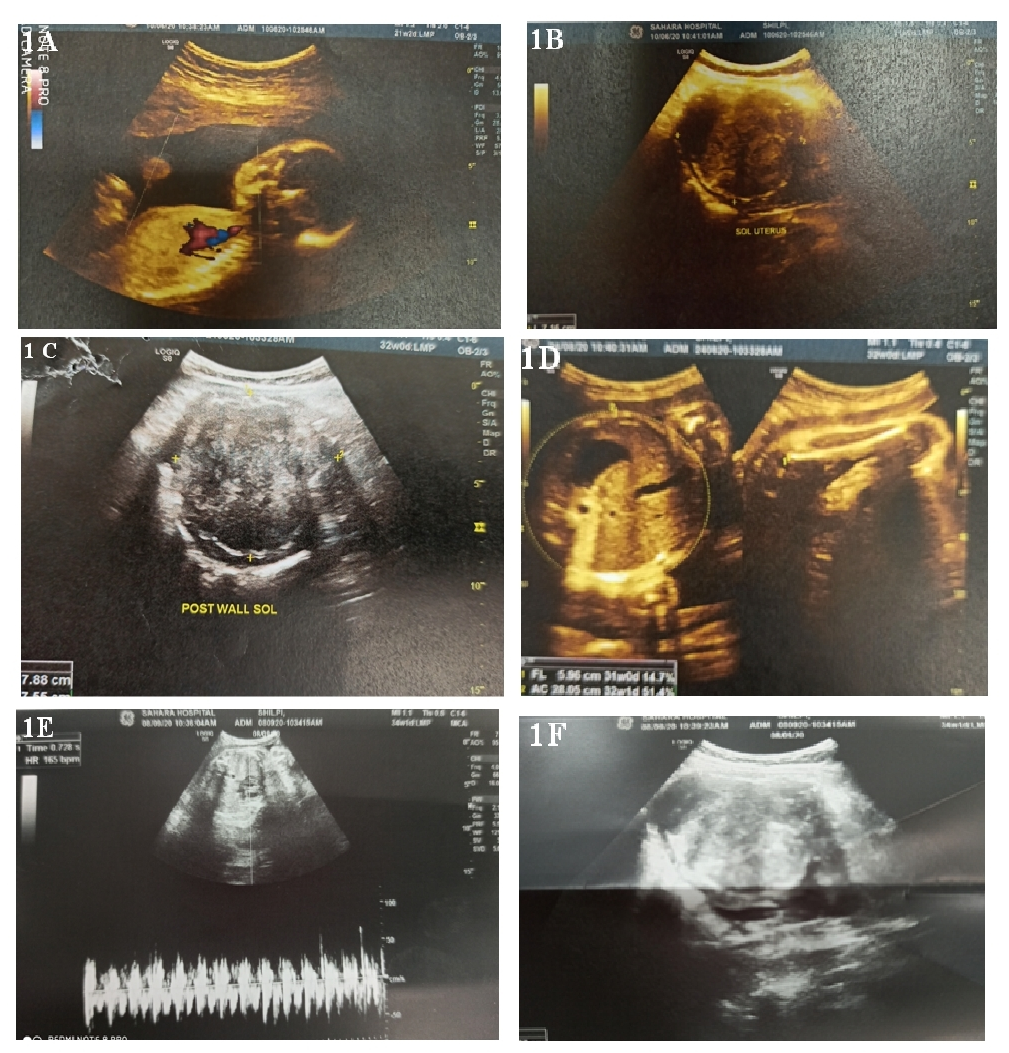 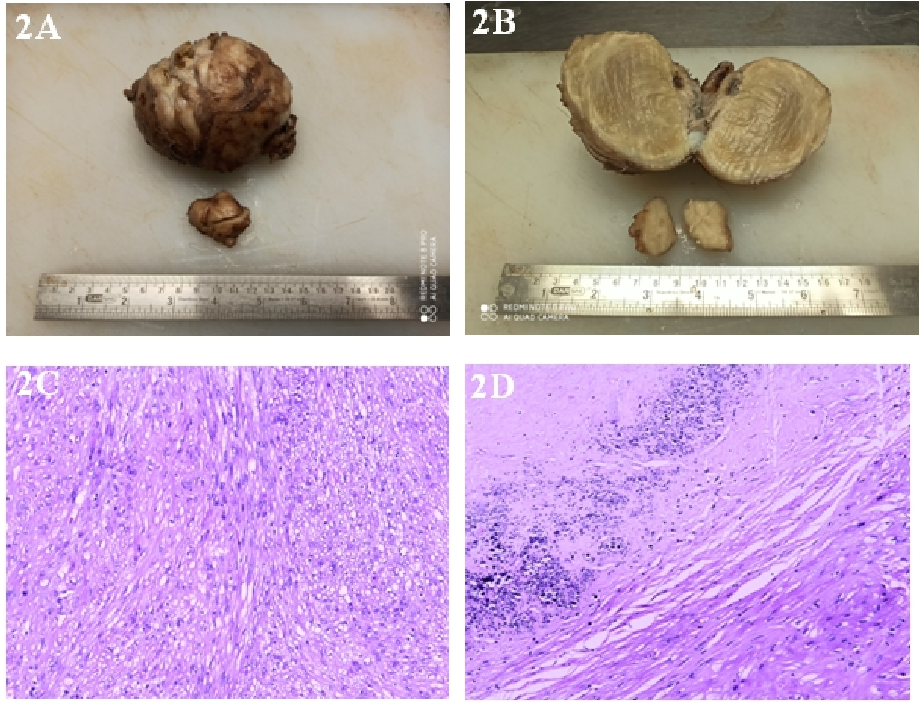 A 34-year- old female was supervised in our unit throughout her spontaneously conceived pregnancy. This was her 3rd pregnancy. She had history of two still births, complicated due to gestational Diabetes mellitus (GDM) and pregnancy induced hypertension (PIH). Presently she was a known case of GDM on insulin control. Her earlier ultrasound showed single live fetus of 32 weeks + 4 days ± 3weeks with normal Doppler and evidence of a large well defined heterogeneous space occupying lesion measuring approximately 7.9x 7.5 cm in posterior wall of uterus in right lateral aspect suggestive of fibroid. Fetal heart rate was 123 beats per minute and estimated fetal weight was 1942 grams± 291gms. Placenta was anterior mid cavity with grade 2 maturity. She was asymptomatic throughout her pregnancy except having little abdominal discomfort. At 35weeks gestation she was admitted in hospital with complaints of heaviness and increased abdominal discomfort on routine activity. On examination pulse was 82/minute, blood pressure-110/80 mm of Hg, respiratory rate -18/min and SpO2 was 99% on room air. Per abdomen examination revealed uterus as 36 weeks, relaxed and fetal heart sound was 148/min. She was administrated two doses of steroid 24 hrs apart. All pre-operative work up was done. Preoperative blood counts showed hemoglobin 10.2 gram%, total and differential counts were within normal range, platelets were 89000/cu mm(Normal range- 1,50,000- 4,00,000/cu mm). Viral markers were negative and alkanine phosphate was 198 U/L (Normal range 35-105). She was planned for cesarean section followed by myomectomy. Endocrinology opinion was taken for managing her blood sugar. Patient was taken up for surgery after complete work up and informed consent was taken and adequate blood products were arranged.

Patient underwent cesarean section followed by myomectomy under spinal anesthesia. Abdomen was opened by pfenestine incision. On entering the abdominal cavity the left round ligament, ovary and fallopian tubes were rotated to the right, the uterus was rotated towards right side by 180degrees. As it was not possible to perform detorsion of the gravid uterus, a posterior low transverse hysterotomy was performed for delivery. A live male baby was delivered as Vertex position. After suturing the incision site, the uterine torsion was corrected. One large approximately 7.0x8.0 cm fibroid was present in the anterior surface of uterus, subserosal with a broad surface stalk and another small 3.0x4.0 cm fibroid was present on posterior surface of uterus. Myomectomy was performed and specimen was sent for histopathology. Cut surface of the specimen had a raw silk appearance (Figure 2 a,b) and on microscopy it revealed intersecting bundles of smooth muscle cells separated by well-vascularized connective tissue. Areas of hyalinization and calcification are seen (Figure 2 c,d).

Post operative period was uneventful. Patient was prescribed prophylactic injectable antibiotic along with supportive medications for three days then shifted to oral antibiotics for next five days. Patient recovered well and was discharged on fifth post-operative day.

The rotation of pregnant uterus is common during pregnancy but rarely exceeds 45 degree and is most often to the right side. Uterine torsion is defined as the rotation of uterus of more than 45degrees on its long axis. Various authors have reviewed the reports of torsion of gravid uterus and found that majority of the cases are unexplained. However uterine myomata (31.8%), uterine anomalies up bicornuate uterus (14.9%), pelvic adhesion (8.4%), ovarian cyst (7%), abdominal presentation and fetal anomalies (4.6%), abnormalities of spinal and pelvis(2.8%) were observed by others. There have been case reports wherein other causes like external cephalic version, maternal trauma are also reported.1

The clinical presentation of torsion in gravid uterus during antenatal period is very non- specific thus antenatal diagnosis is not always possible. Authors have reported observation on USG comparing a modification of placental site to the previous scan and abnormal position of ovarian vessels across uterus on Doppler to diagnose torsion. Change of position of fibroid can be used to diagnose torsion on USG, as was seen in our case. In our case at 21 weeks of gestational age the USG scan clearly showed presence of myoma approx 79.0x72.0 mm in anterior myometrium of fundus. While USG scan at 24 week gestation mentioned the presence of fibroid 77.0x76.0 mm in posterior wall. This torsion can be diagnosed antenatally by Magnetic resonance imaging [MRI]. ‘X’ shaped configuration of upper vagina on MRI used as a sign to diagnose torsion. This is based on the fact that vagina is normally seen on MRI as ‘H’ shaped structure.2

Uterine torsion is an acute gynaecological emergency which requires emergency laprotomy.3 At term uterus is derotated and LSCS (low segment cesarean section) is done. If derotation is not possible, posterior lower transverse incision is given.

Rak et al suggested deliberate posterior low transverse incision at cesarean section of gravid uterus in 180 degree of torsion.4 This was also done in our case and uterine incision sutured back in two layers. An elective cesarean is advised in next pregnancy as risk of rupture is not known. Reports of vertical posterior incision and myomectomy are also found in difficult cases.3 The meticulous dissection must be practiced maintaining proper anatomy and hemostasis.

Prenatal mortality with uterine torsion is a matter of great concern while maternal prognosis is generally good after surgical treatment.

One in every 6 pregnant women had uterine fibroid that presented as a sensation of pelvic heaviness, lower abdominal pain and vaginal bleeding. Various changes in fibroids during pregnancy are well known. But this case report highlights that the torsion of gravid uterus can be a cause of fibroid, thus it should be monitored with several follow up scans and timely intervention is advised for optimal outcome thus reducing perinatal morbidity.

Laparotomy and detorsion is the treatment of choice, although more radical treatments such as hysterectomy and bilateral salpingo-oophrectomy may be needed in severe cases of torsion. There is a risk of irreversible ischemia and subsequent necrosis in patients with uterine torsion, thus again emphasizing the importance of early radiological imaging and high index of clinical suspicion.