Annal and Sagili: Symptomatic fibroids in a perimenopausal woman with previous two caesarean sections and incisional hernia repair. Can surgery be avoided?

Symptomatic fibroids in a perimenopausal woman with previous two caesarean sections and incisional hernia repair. Can surgery be avoided?

Leiomyomas are the most common benign gynaecological tumour and contribute to 40-60% of hysterectomies performed all over the world. Despite proven benefits of GnRH analogues in reducing the size of myoma, it is used mostly as a temporary preoperative drug, as it has not shown to be associated with complete mass regression. We present a case of an abnormal uterine bleeding in a perimenopausal woman with history of multiple caesarean sections and incisional hernia repair. The patient was diagnosed with leiomyoma and was severely symptomatic due to anaemia. She responded to GnRH analogues and the mass regressed completely after 6 months. A favourable outcome in this patient establishes the role of medical treatment in symptomatic uterine fibroids in perimenopausal woman with previous abdominal surgeries where the risks of surgical intervention may be higher.

Fibroids are most common benign gynaecological tumor prevailing in 70 – 80% of woman reaching 50 years.1 Although surgical therapies of myoma uterus are considered definitive, medical management continues to be the first-line treatment in women who want to preserve fertility and delay or avoid surgery. Gonadotrophin releasing hormone agonists (GnRHa) are the most extensively studied drug mainly used as preoperative therapy to shrink the size of large myomas. When the drug is used in well selected group of patients it may be conducive in avoiding surgery. However, complete regression of large symptomatic fibroid is not reported. We present a case perimenopausal woman with multiple abdominal scars having a large and symptomatic fibroid treated with GnRHa causing near total regression of the myoma along with concurrent menopause.

A 48-year-old multiparous woman presented to us with complaints of heavy menstrual bleeding with passage of clots for the past 6 months and associated dysmenorrhoea for 10 days in 30-day cycle. She had two caesarean deliveries and later developed incisional hernia which was managed by open meshplasty.

Her previous medical and family histories were unremarkable. Her general and systemic examination was normal. Physical examination revealed the presence of a firm, nontender, irregular and mobile abdominopelvic mass, corresponding in size to a pregnant uterus of 16 weeks. There were multiple hypertrophic scars on abdomen. 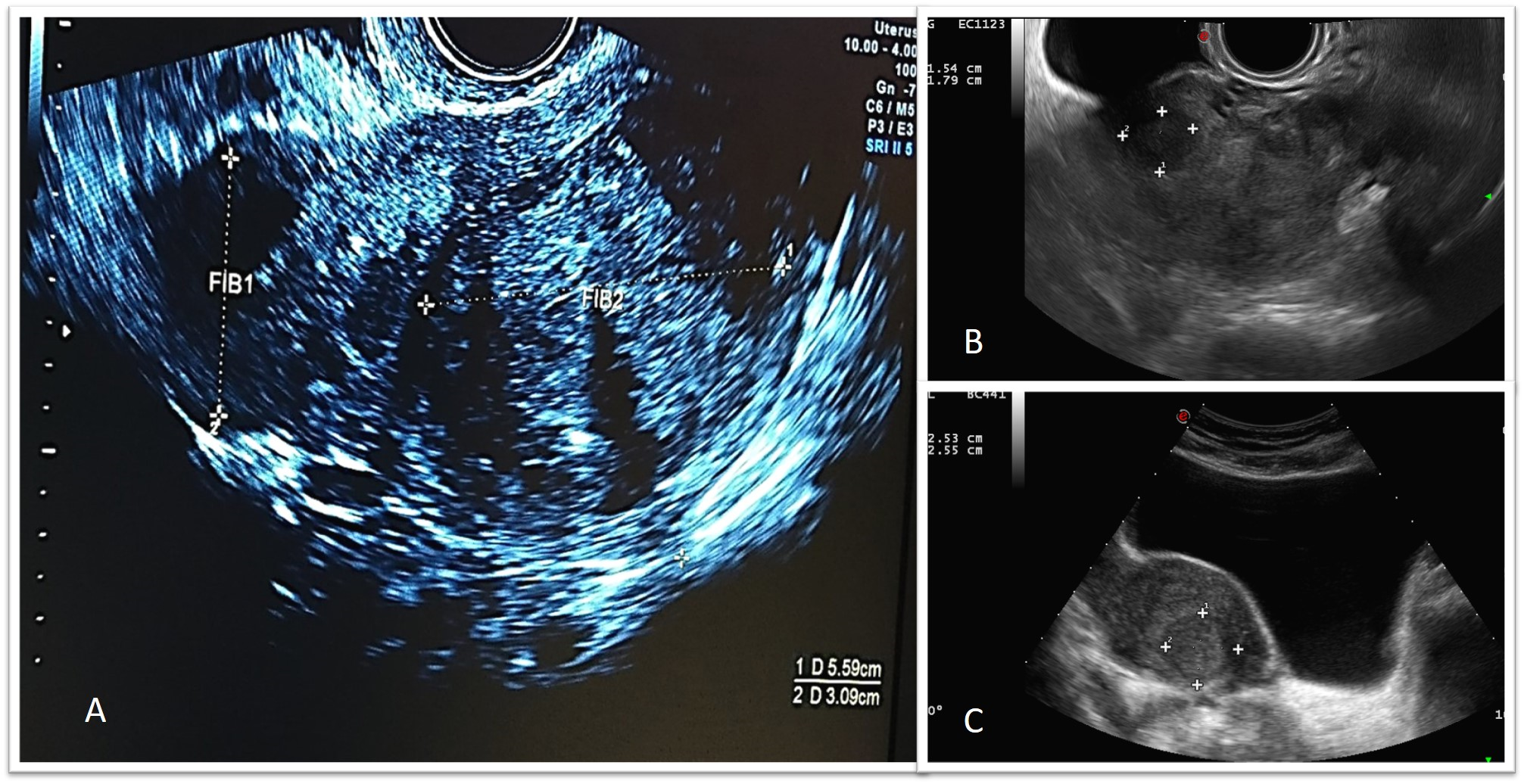 Her transvaginal ultrasound (TVUs) showed enlarged uterus with fundal type 5 myoma of 4.7 x 4 cm and a posterior wall type 2 -5 myoma of 6.2 x 5.7 cm. She was pale with haemoglobin of 7g% and peripheral smear revealed normocytic normochromic picture with no abnormal cells. She was hence prescribed therapeutic dose of oral iron and counselled about various treatment modalities for the large fibroid. Patient opted for medical management of uterine myomas with GnRHa as she was apprehensive to undergo a fourth abdominal surgery. She received 3.75 mg of Injection Leuprolide acetate in monthly intramuscular injections. Follow up imaging done after three doses of GnRHa revealed 22% and 25% decrease in size of fundal and posterior wall myomas respectively. Two more doses of Injection Leuprolide were given and the final mean diameters of fundal and posterior wall myomas were 1.6 cm and 2.5 cm corresponding to 64% and 60% decrease in size respectively. During this treatment she was prescribed add-back therapy too. The patient became asymptomatic and had improved haemoglobin concentration. She came for 6 monthly follow up and did not resume her periods after discontinuation of GnRHa leading to the occurrence of natural menopause. Her pelvic exam and scan during this time revealed a normal size uterus.

Uterine myomas are noted to be more than 30-40% in women of 40 – 60 years of age compared to 4-18% in women of reproductive age group (20 – 40 years).1 Most of them are asymptomatic but few have symptoms such as heavy menstrual bleeding, dysmenorrhoea, pelvic pressure, infertility and early miscarriage. The initial step of diagnosis is the imaging of myomas by transvaginal ultrasonography. Magnetic resonance imaging is preferred for precise myoma mapping.

The development of uterine myomas with menarche and pregnancy and its suppression with menopause validates the oestrogen dependant nature of these tumours. Brandon et al described the oestrogen and progesterone receptor gene expression in uterine leiomyoma compared to adjacent myometrium, explaining the regulatory activity of these hormones on myoma growth.2 Further studies have demonstrated expression of oestrogen synthetase and aromatase by myoma cells, producing a local oestrogen environment to support its own growth.3 Understanding this pathophysiology, medical management of uterine leiomyomas have been used extensively by gynaecologists.

Even though surgical techniques such as myomectomy and hysterectomy have been definitive management of uterine myomas, it has associated risks such as haemorrhage, infection, injury to vital organs, anaesthetic related complications. In those women preserving fertility or desiring to avoid/postpone surgery, medical management of myomas are preferred option. This includes the use of antiprogestogens (mifepristone), GnRH agonist, selective estrogen receptor modulator (raloxifene), aromatase inhibitor (letrozole) and androgens.

GnRHa are synthetic peptides which acts by binding to GnRH receptors causing its desensitisation after an initial flare-up, leading to hypogonadotropic hypogonadal state. It is currently used mainly as an intermittent preoperative treatment to decrease the size of myomas causing 20–50% uterine volume reduction. This aids in the conversion of abdominal surgeries to vaginal/laparoscopic surgeries and also reduction in blood loss. Rutgers et al. concluded that the size of intramyomatous arteries in women treated with GnRH agonist was smaller and showed atherosclerotic changes compared to those receiving placebo.4 Significant therapeutic benefit in terms of reduction in uterine volume and size, fibroid volume and duration of hospital stay were noted in the Cochrane Systematic Review when GnRHa was used preoperatively before hysterectomy or myomectomy.

The average age of menopause of an Indian woman is 46.2 years compared to 51 years in western counterpart. In our case, we used GnRHa in a perimenopausal woman of 48 years with multiple uterine myomas as a treatment option, intending to reduce the size and symptoms till the natural menopause takes over.

GnRHa is reported to be one of the most effective therapeutic alternatives when compared to placebo in terms of bleeding, myoma volume and myoma related abdominal discomfort. These proven benefits must, however, be weighed against their limitations such as menopausal like side effects such as hot flashes, atrophic vaginitis and decrease in bone mineral density and reversibility when treatment is ended. However, a study conducted by Imai et al. used GnRHa for 6 months in a selective group of women more than 45 years and concluded that GnRHa induced amenorrhoea preceded the natural menopause in 90% cases. Also elevated FSH level of more than 25 mIU/ml can be predictive of successful therapy leading to menopause.5 Add back therapy with tibolone, raloxifene, estriol or ipriflavone can help to reduce bone loss without compromising its therapeutic effects of GnRHa.

GnRHa can be used as a therapeutic alternative to hysterectomy in perimenopausal women with symptomatic fibroids during the years immediately preceding menopause thus avoiding surgery and its risks especially in women with previous abdominal surgeries.

The authors declare that they have no conflict of interest.

Informed consent was obtained from patient for using patient’s personal health information in this case report.