Bicornuate uterus is a type of mullerian duct anomaly which is responsible for recurrent spontaneous first trimester abortions. They are best managed surgically using Strassman’s metroplasty. We present a case of recurrent spontaneous abortions which was diagnosed as bicornuate uterus. We performed a laparoscopic metroplasty which was successful and did not encounter complications like adhesions or hemorrhage. The advantages of laparoscopic metroplasty outweighs the challenges in restoring fertility status to women with mullerian duct anomalies.

Among the several anomalies constituting mullerian duct anomalies, bicornuate uterus forms a predominant one, with an incidence of 25%. In addition, didelphic uterus also forms an essential component of mullerian duct anomalies, with a prevalence of 11%.3 It has been well-established that presence of these abnormalities results in poor pregnancy outcomes. The incidence of various outcomes of pregnancy among patients with didelphic uterus includes spontaneous abortion (36%), pre term deliveries (23%) and term deliveries (40.6%), while the same for bicornuate uterus includes 37%, 16.4% and 43.3% respectively.3 It is therefore essential to look out for mullerian duct anomalies in a women with repeated pregnancy losses.

The mainstay in management of bicornuate uterus is surgery. The ability of the Strassman procedure to prolong subsequent gestations in such cases is uncertain, but it has been shown to be effective in a select group who has experienced recurrent pregnancy losses.4, 5 In this case report, we present a case of recurrent abortions in a patient with bicornuate uterus which was managed surgically with laparoscopic metroplasty.

A patient with two previous spontaneous first trimester abortions came to our hospital for evaluation for conception. Per vaginal examination showed normal vagina with single cervix and bicornuate uterus. The clinical findings were confirmed by CT evaluation. (Figure 1) The patient was counseled and taken up for laparoscopic metroplasty after obtaining consent from both the patient and her hsuband. Laparoscopic metroplasty with diagnostic hysteroscopy was performed in the early proliferative phase. Antibiotics were administered before the surgery. In the lithotomy position, a diagnostic laparoscopy and hysteroscopy were performed. Hysteroscopy showed the presence of single cervix with bicornuate uterus with tubal opening in each cornu.

For the laparoscopic metroplasty procedure, a 10-mm trocar was inserted at the palmar point and insufflated with carbon dioxide at a pressure of a 15 mmHg. On direct view, two 5-mm trocars were placed in the right and left lower quadrant of the abdomen. There was no adhesion of the uterus to the bowel or bladder or in the pelvic cavity. The fallopian tubes and ovaries were normal. (Figure 2) At first, a superficial incision was held along the medial aspect of the uterine horns meeting at the base with a bipolar needle. After that an incision deep enough to cut the myometrium was held along the medial aspect of the uterine horns with a monopolar hook. (Figure 3) This incision extended from the superior aspect of each horn near the interstitial region of the fallopian tubes to the inferior aspect of the uterus. The endometrium was exposed. Apposition of the myometrium excluding endometrium was done using interrupted sutures with 2-0 PDS to form a single uterine cavity. (Figure 4)

The post-operative period was uneventful. Patient was given conjugated estrogen for 21 days and medroxyprogesterone for last 10 days for 6 months. 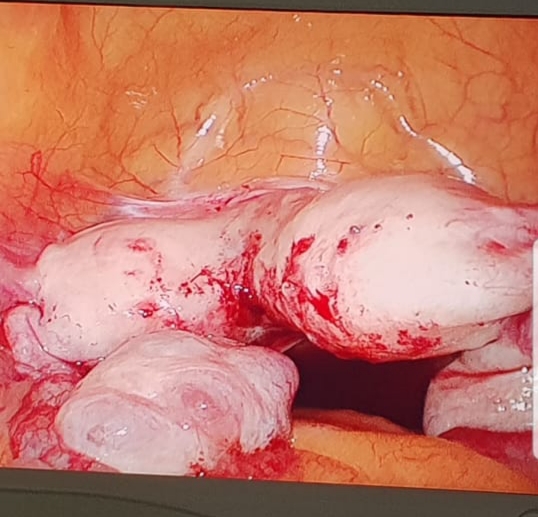 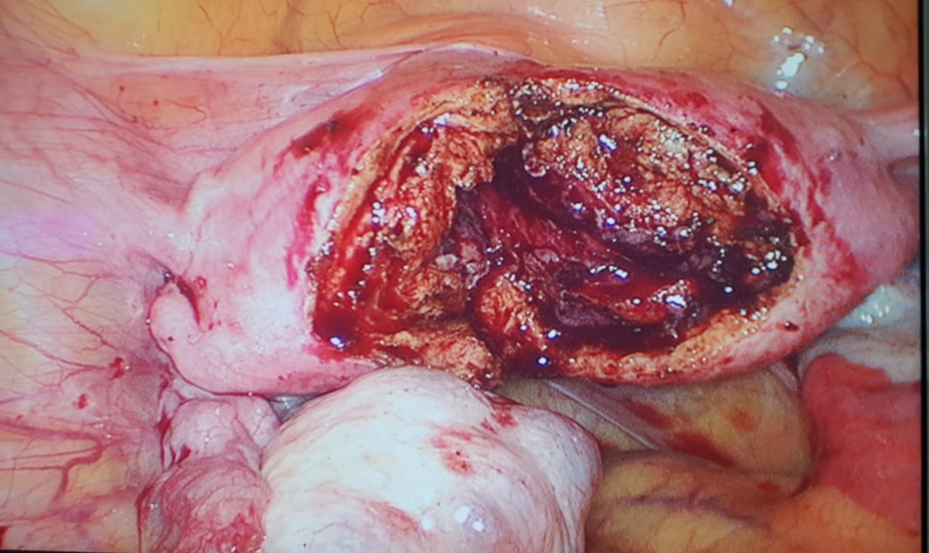 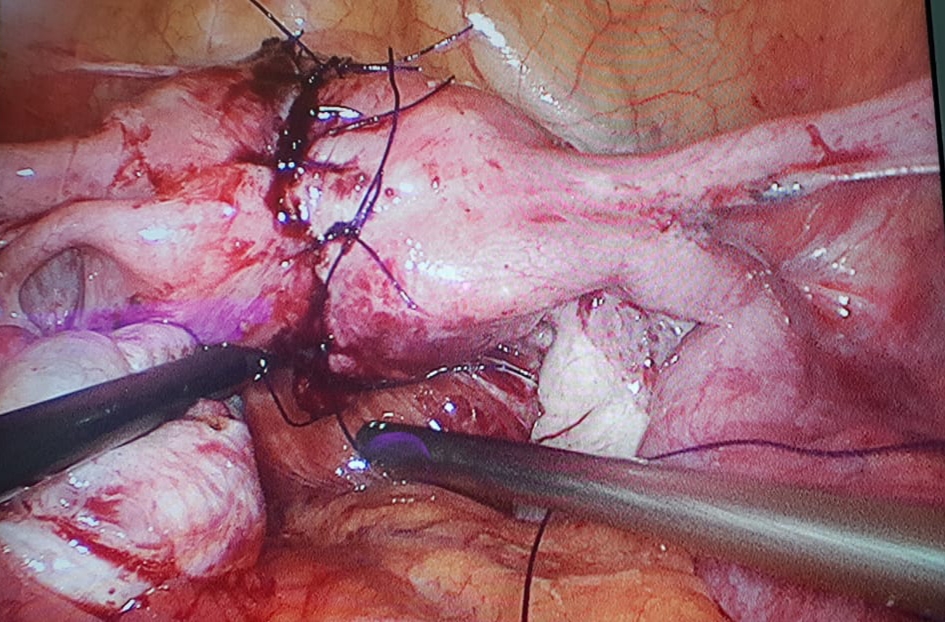 Laproscopy for the treatment of Bicornuate uterus is a safe option. Initially it was used for diagnostic purpose only but in the hands of skilled surgeons it is considered an alternative to abdominal Strassman metroplasty. The key advantage of laparoscopic procedure is less incidence of adhesion due to minimial tissue handling.7 Adhesions are further minimized by use of liquid agents like 4% Icodextrin solution or spraying with hydrogel barriers.8 However, good suturing skills are required for ensuring complete hemostasis in laproscopy. Adequate care may be taken to ensure that the myometrial edges are not sutured under tension, as it is prone for hematoma formation. It also increases the chances of necrosis formation in the uterine musculature. In this case, patient was not willing for second look laproscopy and therefore it was averted.

Laparoscopic metroplasty may be considered as a therapeutic procedure for bicornuate uterus and didelphic uterus to facilitate pregnancy. However, the performance of scarred uterine musculature during the labor has been questioned in several studies. Elevating intrauterine pressure upto 150 mmHg with a continuous positive pressure flow of 5% dextrose solution was proven to be effective in combating labour.9 Although there is an increased chance of scar rupture during late pregnancy, the successful outcomes in terms of full term normal vaginal delivery has been observed in 62.5% of the patients who have undergone laparoscopic metroplasty.10