Desikan, Coumary A, and Habeebullah: Pentalogy of Cantrell with encephalocele – A case report with review of literature

Pentalogy of Cantrell is a rare structural disorder. It is a combination of congenital defects in the midline comprising of supraumbilical abdominal wall defect, defect in the lower sternum, deficient anterior diaphragm, defect in diaphragmatic pericardium and intracardiac defects. It is proposed to result from an insult occurring as early as 14th to 17th day of embryonic life. It involves the ventral midline due to disruption of midline mesenchyme. Etio-pathogenesis is still largely unknown. The insult could be environmental or disruption of a single gene, either autosomal or X linked. Very rarely Cantrell’s syndrome is associated with neural tube disorders. Here, we report one such rare case of Pentalogy of Cantrell.

Pentalogy of Cantrell (PC) is a rare disorder with incidence of 5.5 per million live births.1 It has a male preponderance with male to female ratio of 3:1. It was first described in 1958 by Cantrell, Haller and Ravitch. The syndrome consists of a combination of congenital defects such as midline supraumbilical abdominal wall defect, defect in lower sternum, deficient anterior diaphragm, defect in diaphragmatic pericardium and intracardiac defects.2 Very rarely PC can be associated with neural tube defects (NTD) such as encephalocele, anencephaly, exencephaly, spina bifida, meningomyelocele and craniorachischisis.3 Literature search has revealed that only about eight cases of PC with NTD has been reported so far.

A 25-year-old primigravida at 17 weeks and 4 days of pregnancy presented to the outpatient department. She had no complaints. She had come to take a second opinion, as she was told that her baby was abnormal in a recent ultrasound examination. On detailed history, it was a non-consanguineous marriage. There was no history of any known teratogenic exposure in early pregnancy. There was no significant family history. Her general physical and obstetric examination was normal with the uterus size corresponding to her gestational age. Base line blood investigations were normal. A detailed anomaly scan was done with Mindray DC 8, convex probe 5 - 2 MHz. It revealed a single alive foetus with normal placenta and liquor. There was a large supraumbilical anterior abdominal wall defect with liver and loops of small bowel seen eviscerated out. (Figure 1, Figure 2) On further examination, it was noted that the cardiac pulsations was found outside of the thoracic cavity. Hence, an obvious sternal defect with ectopia cordis was diagnosed. A foetal echo was done which revealed a small ventricular septal defect of 5 mm. On the dorsal aspect, the posterior cranium was deficient and a posterior encephalocele was diagnosed. Face appeared normal. The extremities appeared normal. A diagnosis of PC with posterior encephalocele was made.

The couple were counselled with the help of foetal medicine specialist and a paediatrician. Given the grave prognosis of the foetus, the couple opted for termination of pregnancy. The pregnancy was medically terminated. A complete gross examination of the fetus confirmed the supraumbilical gastroschisis, lower sternal defect, ectopia cardis and posterior encephalocele. Also the great toe in the right foot was absent. (Figure 3, Figure 4) The parents did not consent for autopsy and so, the pericardial defect and the diaphragmatic defect could not be determined. Chromosomal analysis could not be done. Hence the case was classified as Cantrell‘s pentalogy class III with posterior encephalocele. 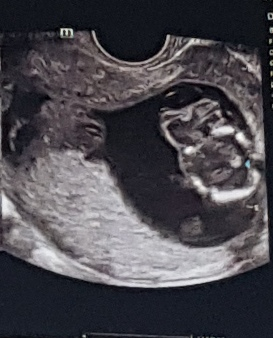 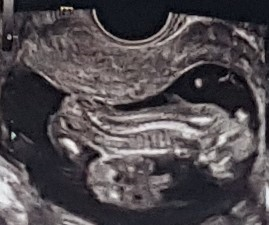 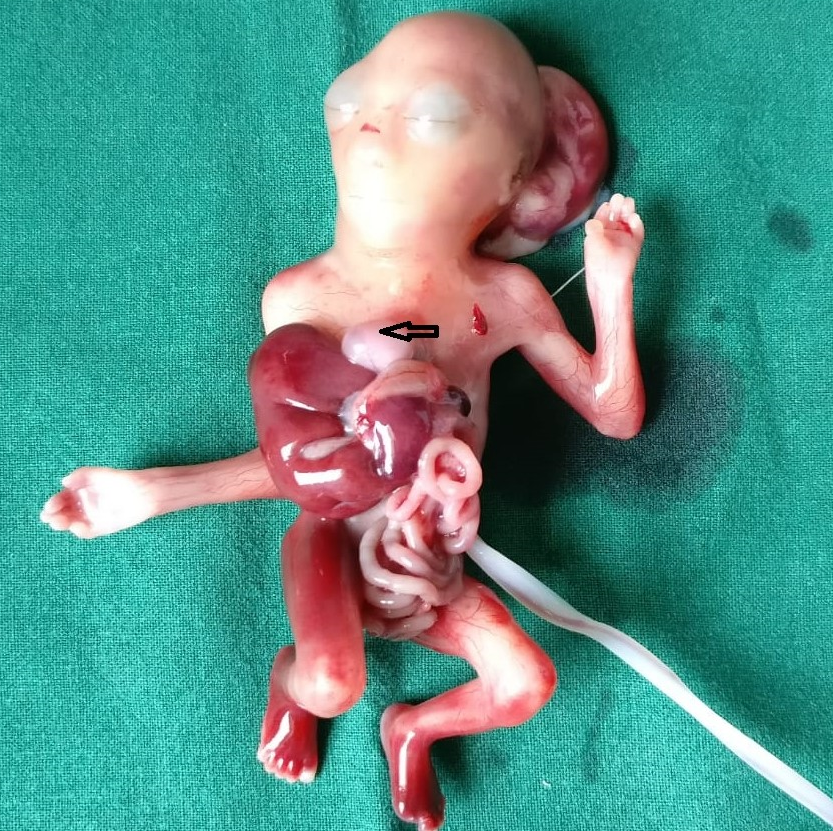 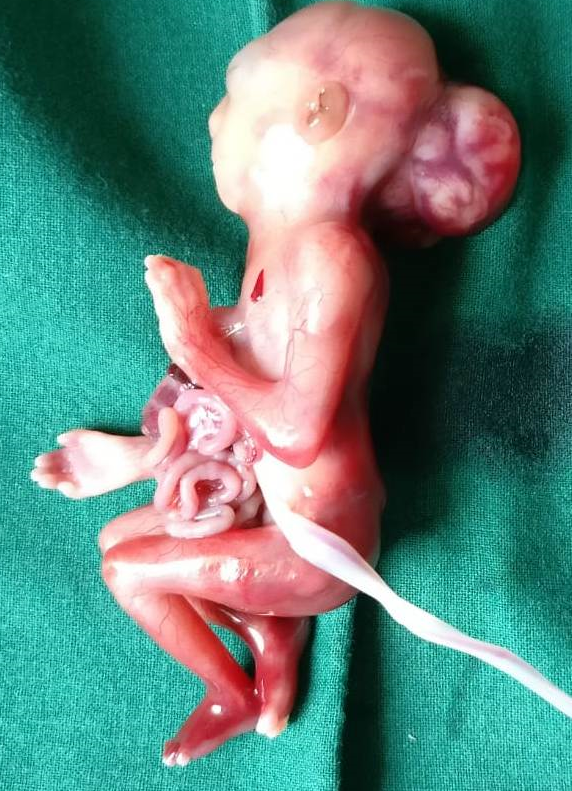 Pentalogy of Cantrell is a rare disorder which is a combination of congenital defects in the midline supraumbilical abdominal wall defect, defect in the lower sternum, deficient anterior diaphragm, defect in diaphragmatic pericardium and intracardiac defects. Cantrell et al. studied the consistent association of such anomalies and proposed a syndrome called the Pentalogy of Cantrell.

Embryologically, the somatic mesoderm gives rise to the sternum, pericardium, part of the diaphragm and the abdominal wall.4 The myocardium arises from the splanchnic mesoderm. Any insult occurring around the fourteenth to the seventeenth day, prior to this differentiation causes defects in these structures. The defects in PC mainly involve the ventral midline which is due to disruption of midline mesenchyme. Also the failure of the lateral mesodermal folds to migrate to the midline, cause the sternal and abdominal defects. Defects in the anterior diaphragm and pericardium develop secondary to the failure of septum transversum to develop.

A complete PC has two components, ectopia cordis and abdominal wall defect mostly ompalocele. The other defects are in the interposing structures. However incomplete forms have also been reported. Toyama suggested a classification for PC into 3 classes.5 Class I includes classical cases with all the 5 components. Class II includes cases with four defects including the presence of intracardiac anomaly and abdominal wall defect. Class III are cases with various combinations in the presence of a sternal defect.

The etio-pathogenesis of PC is not well understood. Opitz and Gilbert (1982) first proposed the idea of the embryonic midline as a developmental field. Others have also provided evidence for the existence of single genes that orchestrate the development of embryonic midline. The X-linked TAS gene (Thoraco-abdominal syndrome) mapped to Xq27 has been implicated in the causation of midline defects.1, 6 ALDH1A2 gene located at 15q21.3 codes for the enzyme type 2 retinaldehyde dehydrogenase which converts vitamin A to retinoic acid which is vital in the development of heart and the diaphragm. The duplication of this gene has been linked in the causation of PC.7

BMP (bone morphogenetic protein) are a subfamily of the TGF – beta superfamily that were originally identified for their osteo-inductive ability. They also have various roles during embryonic development. It is a critical factor for the migration of neural crest cells. A study by Singh et al. in mouse model, suggest that expression levels of BMP 2 gene in both maternal uterine tissue and in the embryo influence closure of both neural tube and ventral body wall.8 This might be implicated in the pathogenesis of PC with neural tube disorders. More recently, Bashar et al. have provided a in depth characterisation of a mouse model with conditional ablation of TGF-betaRII in Transgelin (Tagln) expressing cells. Tagln is involved in the patterning of ventral structures and genetic ablation of TGF-beta RII in specific cells leads to ventral midline closure defect, diaphragmatic hernia, cardiac outflow tract and septation defects thus recapitulating features of Cantrell’s Pentalogy.9

The ultrasound diagnosis of PC can be done in a late first trimester ultrasound with the help of doppler imaging.10 Cekmez Y et al. diagnosed PC with craniorachischis as early as 10+6 weeks of gestational age with a CRL of 40mm.11 Murata et al. also reported a case of PC with craniorachischisis in first trimester where a 2D USG showed a cystic structure suggestive of encephalocoele. In this case, 3D transparent mode was used which clearly delineated the bony abnormalities of craniorachischisis and sternal defect.12

Ectopia cordis is a striking feature of PC. Whenever it is detected in USG, it is imperative to look for other differential diagnosis. Ectopia cordis can occur alone as isolated Ectopia cordis or as a component of body stalk anomaly or as a result of amniotic band syndrome.13 In body stalk anomaly the abdominal wall defect is eccentric, large and the placenta is adherent to the defect. In Amniotic band syndrome the ventral wall defect is associated with a limb deformity. Omphalocele is diagnosed as a midline or lateral abdominal wall defect with cord being inserted to the covering membranes.

The occurrence of PC is sporadic. Recurrence has been rarely reported. RA Martin documented the familial recurrence of PC in 3 brothers born consecutively, two of whom had all the five features and one had only bilateral diaphragmatic defect.14 Satya et al. reported recurrence in a mother whose previous pregnancy was also terminated due to PC.15

Generally the prognosis of complete PC is very poor. Having associated anomalies also worsens the prognosis. Kiren et al. in his case series, showed that of the five cases of PC detected at later gestations, 4 babies died in the first year of life despite multidisciplinary team approach. However Jeroen et al. reported a case of successful surgery in a case of incomplete PC.16

Once an ectopia cordis is diagnosed, look for PC and other associated anomalies. Form a multidisciplinary team. Discuss feasible treatments with patient and decide on further management.

WM Toyama Combined congenital defects of the anterior abdominal wall, sternum, diaphragm, pericardium, and heart: a case report and review of the syndromePediatrics197250577892