Dasari and Ali: The consequences of fetal reduction for quintuplets after ICSI-ET

The consequences of fetal reduction for quintuplets after ICSI-ET

A 30-year-old primigravida who conceived following ICSI (Intra Cytoplasmic Sperm Injection) was admitted at 34 weeks of pregnancy with singleton fetus in breech presentation with Gestational diabetes and Gestational hypertension. To start with Quintuplets were diagnosed and she underwent fetal reduction of 3 foetuses at 14 weeks of pregnancy. Follow up USG revealed only one live fetus after one week. At LSCS (Lower Segment Caesarean Section) performed at 37 weeks, the placenta was found to be adherent and was manually removed. There was profuse bleeding after removal of placenta which was not controlled with uterine massage and uterotonics. Placental examination showed 3 fetus payraeceae. Intrauterine examination revealed an adherent fetus which was removed following which the haemorrhage stopped. In pregnancies following fetal reduction, postpartum haemorrhage can result due to retained fetus papyraceus and hence it is essential to make sure all papyraceae were removed.

Quintuplets are one of the higher order pregnancies which are rare (natural occurrence 1 in 55,000,000) and in the modern times occur most often due to assisted reproductive techniques. These pregnancies cause considerable maternal morbidity like early onset gestational hypertension, pre-eclampsia, eclampsia, gestational diabetes and abruption and perinatal morbidity and mortality due to prematurity and its consequences.1 The average gestational age reported at delivery was 29.5 weeks for quadruplets and 29 weeks for quintuplets.2 The spontaneous pregnancy loss is estimated to be 25% for quadruplets and three times more than this for quintuplets. To decrease the foetal loss and complications associated, fetal reduction was introduced by Evans in 1988. The risk of fetal loss was reduced by 50% when fetal reduction was undertaken.3 Hence in modern days fetal reduction is performed to keep at least 2 fetuses. Literature search did not show the consequences of fetal reduction and retained fetus papyraceus leading to postpartum haemorrhage. Hence this case is reported.

A 30-year-old lady was admitted at 34 weeks of pregnancy with singleton fetus in breech presentation with Gestational diabetes and Gestational hypertension. This pregnancy was following ICSI for male factor infertility of 3 years. She conceived Quintuplets after transfer of 5 frozen embryos at a time. At 14 weeks she underwent fetal reduction of 3 foetuses but within a week only one FHR was documented. She was managed with progesterone support and underwent elective LSCS at 37 weeks for breech presentation. Her past USG (Ultra sonogram) did not report on the presence of fetus papyraceous. After admission USG performed on 2 occassions reported placenta implanted on the anterior wall of the uterus on the upper segment, fetal biometry corresponding to the gestational age and fetus in breech presentation. AFI (Amniotic Fluid Index) was 6.6 cms on USG performed at 36+5 days. Her haemogram was with in normal limits and PT/INR (Prothrombin time and International Normalised Ratio) was 16/1.5 performed one day prior to Elective LSCS (36+6 days Gestation). Other coagulation profile was not done as there was no history of bleeding per vaginum. Elective LSCS was performed at 37 weeks and an alive male baby was extracted as breech with an Apgar of 8/10 at 1 min weighed 2.9 kg. Prophylactic Oxytocic, Syntocinon 10 IU was added in to the Normal saline prior to uterine incision (as per the departmental protocol) and 10 IU was administered intramuscularly. The angles of the uterine incision were secured and ligated awaiting the separation of placenta. The placenta did not separate for 10 minutes after delivery of the baby and it was found to be adherent and was manually removed. There was profuse bleeding after removal of placenta and before uterine closure. Uterus was exteriorised and uterine massage was given as it was felt little flabby and 40 IU of Oxytocin was added to normal saline and was infused at a faster rate. (200 ml /hour) Uterus was contracted well but there was persistent bleeding from the cavity. Intrauterine examination by the operating Obstetrician did not find any retained placental bits or membranes. Examination of the placenta which was removed showed oly 3 fetus papyraecea along with cords Hence a retained fetus papyraceaus was suspected and again intrauterine examination was done by senior Obstetrician and it was found that the fetus payraceous was densely adherent to lateral wall of the uterus. Figure 1 shows placenta with 3 fetus payraeceae with umbilical cords and the one without cord was the retained fetus which was adherent to uterus. The bleeding stopped after the removal of the fetus and uterine incision was closed in layers. Her postoperative period was normal and mother and baby were discharged on 7th post-operative day. 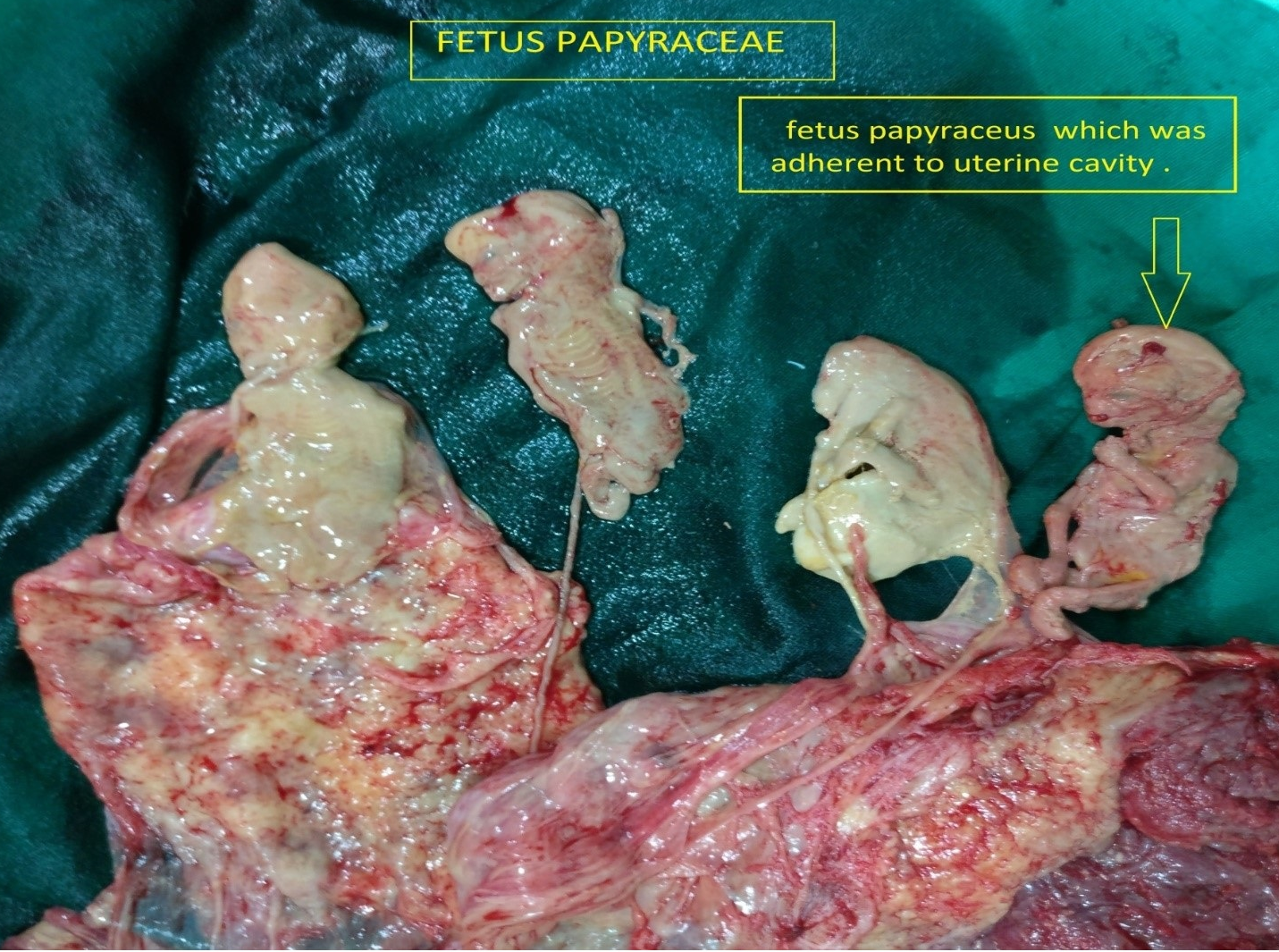 Higher order pregnancies are challenging to manage to the ART specialists and Obstetricians. The first surviving Quintuplets on record were Dionne Quintuplets in 1934. There was a raise in the occurrence of higher order pregnancies since the introduction of ART techniques in 1980’s and then a gradual decline after 2016.4 This is because of the practice of standard protocols and emergence of OHSS free clinics. SART and ASRM (Society for Assisted Reproductive Technology and American Society of Reproductive Medicine) have been publishing and updating the guidelines on Embryo transfer since 1998 and recommend transfer of no more than 3 embryos in women less than 35 years of age and only one or two embryos to be transferred in the first cycle. The effect of implementation of these guidelines resulted in a dramatic decrease in the incidence of higher order multiple pregnancies.5 The current trend is single embryo transfer (SET) or repeated SET to minimise the risk of multiple pregnancy without substantially reducing the likelihood of achieving live birth and this was published in Cochrane data base review.6 For couple with good prognosis factors elective single embryo transfer need to be encouraged as per SOGC.7 ASRM recently issued guidance on “how many” and “how –to” in standardising the embryo transfer protocols.8 None of these practices were followed in this woman who underwent ICSI for the first time.

Current evidence supports the reduction of multifetal pregnancy to twins in order to improve pregnancy outcomes and this was performed in this lady. However there was a fear of losing all the foetuses which existed till delivery. Controversy still exists regarding to choose between embryo reduction or fetal reduction.

A retrospective analysis of selective fetal reduction in triplet pregnancy reported 3.12% pregnancy loss occurring before 24 weeks of pregnancy.9 A recent study from china has reported an abortion rate of 31% when fetal reduction was undertaken at 16 to 14 weeks when compared to 8.8% abortion rate when the same procedure was undertaken between 12 to 13+6 days and 15.6% when performed between 14-15+6 weeks.10 Most of the studies in literature reported on the usage of inj. KCL in to the fetal heart. Recently the use of radiofrequency ablation (RFA) as a method of fetal reduction is reported by few authors. RFA was reported to be effective with higher fetal survival rate when compared to inj. KCL in dichorionic and triamniotic triplets.11

Though second trimester fetal reduction offers the advantage of choosing the structurally abnormal foetuses for reduction12 it remains to be seen whether embryo reduction is a better option to reduce the complications. A study published in 1993 reported on embryo reduction techniques Viz: embryo reduction with inj. of Kcl in to fetal heart (14 cases) by trans vaginal route and embryo aspiration (19cases) between 8 to 9 weeks and the results were compared with those who did not undergo any embryo or fetal reduction (39 triplets). Spontaneous reduction to twins occurred in 18% in the group without intervention and 89% survived after embryo reduction with inj Kcl and 69% survived after embryo aspiration. It was concluded that embryo reduction in triplet pregnancies decreases the take home baby rate per patient but improves the quality of the babies born.13 The safety of transvaginal embryo reduction between seven to eight weeks has been well documented in a study reported from India. In this study, the embryo reduction was undertaken very early in gestation 7 to 8 weeks by transvaginal injection of Kcl (0.4 -0.8 ml) in to the fetal heart of the selected foetuses under general anaesthesia using cooks 20 gauze needle. Complete pregnancy loss occurred in 3.8% among 52 women who underwent the procedure. The contents of the gestational sac were not aspirated.14 Embryo reduction since it is undertaken at very early gestational age and embryos are aspirated, there may not be any fetus papyraeceae and this may also prevent some of the complications of higher order pregnancies.

In pregnancies following fetal reduction, loss of other fetuses can occur and postpartum haemorrhage can result due to retained fetus papyraceus. It is essential to examine the placenta or the uterine cavity to recognise and ensure the fetus papyraceus has been removed. It is desirable to follow the guidelines to decrease incidence of higher order pregnancies because of the complications associated with such pregnancies.

Practice Committee of the Society for Assisted Reproductive Technology. Guidance on the limits to the number of embryos to transfer: a committee opinionFertil Steril201710749013