Agarwal, Rongmei, and Jante: The right timing for surgical exploration is the key to saving lives: An analysis of near- miss mortality cases in a tertiary care hospital in North East India

The right timing for surgical exploration is the key to saving lives: An analysis of near- miss mortality cases in a tertiary care hospital in North East India

Those pregnant women who suffer severe complications and come close to maternal death but do not die are the “near misses”. As India being a country with higher maternal mortality, maternal death review system has been institutionalised in India, however much more needs to be known. Near miss cases often precede the loss but are largely ignored because nothing (death) happened. Sometimes we may face difficulty in diagnosing of these near miss cases due to presence of complex presentation.

These cases were documented to highlight the importance of appropriate management at the appropriate time to save the patient’s life, which were diagnostic challenge and near miss cases.

Maternal near miss case is defined as “a woman who nearly died but survived a complication that occurred during pregnancy, childbirth, or within 42 days of termination of pregnancy”.1 The main causes of death are postpartum haemorrhage (24%); anaemia, malaria and heart disease (20%); infection (15%); unsafe abortion (13%); eclampsia (12%); obstructed labour (8%); ectopic pregnancy, embolism and anaesthesia complications (8%).2

A 39 years old pregnant woman referred to NEIGRIHMS in August 2018 of G9P8L7 at 15weeks gestation with severe anaemia. Her vitals were stable but patient had severe pallor and on per abdominal examination uterine size was 14 weeks. Relevant significant findings on investigation were haemoglobin 3.2 g% and sonography showed 15weeks gestation with IUD with gross ascites and omental thickening, other investigation were within normal limit

Patient was kept in ICU and transfused 6 units PRBC, 4 units FFP to build up her haemoglobin and was started on medical abortifacient 200 microgram of misoprostol 6 hourly for 4 doses was given and after a gap of 1 day similar course was repeated to expel dead foetus from uterus. However, patient did not respond to these two courses, so decision for laparotomy was taken. Intra operatively it was found to be ruptured left cornual pregnancy and excision of the ruptured cornua was done. Patient recovered uneventfully. 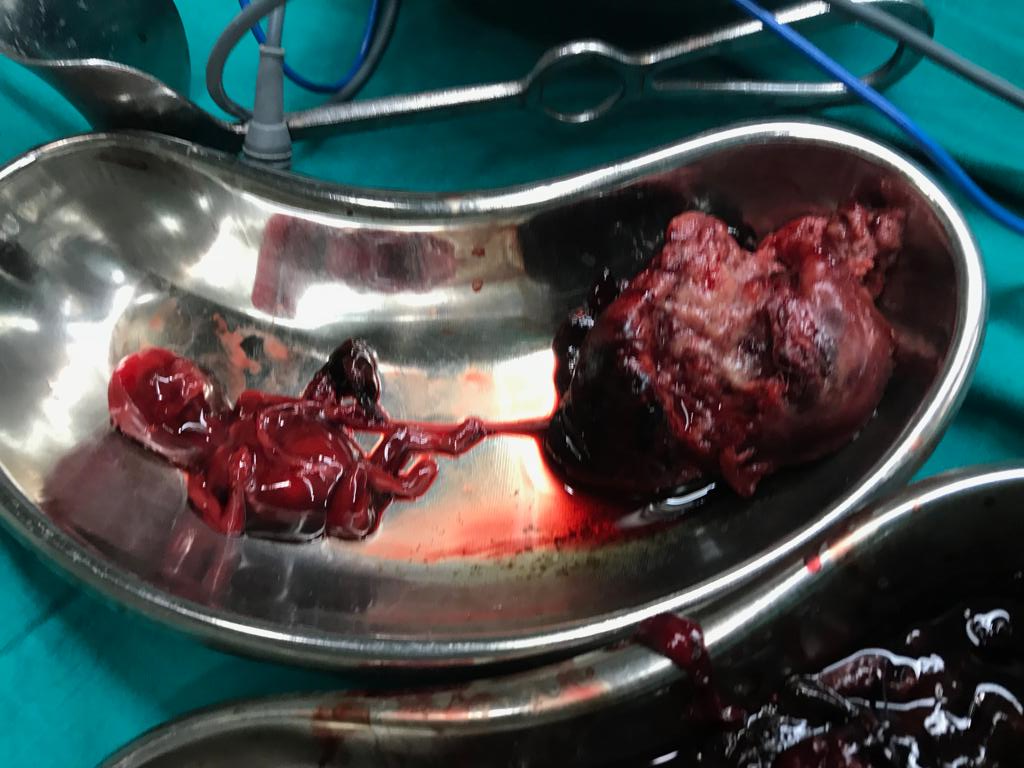 A small rupture in cornua may be difficult to diagnose on ultrasound, hence in this case it was difficult clinically and on ultrasonography to differentiate between intrauterine foetal demise with severe anaemia vis a vis ruptured cornual pregnancy. Timely decision to do laparotomy after failure of medical abortifacient saved patient life.

A 30 years old women referred to NEIGRIHMS on October 2018 with diagnosis of P1L1 post caesarean day 13 with severe anaemia with sub-involution with fever, on clinical examination her pulse rate was 108/min, blood pressure was 90/60 mm Hg and temperature was 101.4 degrees fahrenheit, uterus was 20weeks size. On investigation her haemoglobin was 5 mg/dl, total leucocyte count was 24,000 cell/mm3, sepsis screen was negative, all cultures were negative. Ultrasound showed a posterior uterine wall haematoma or degenerated fibroid. MRI was suggestive of posterior uterine wall haematoma. Patient received 3 units PRBC and 4 units FFP and was started on high antibiotics. However, the fever did not subside till 48 hours after management. Due to failure of medical management the decision of laparotomy was taken because MRI was suggestive of posterior uterine wall haematoma, which could be cause of fever. Intraoperatively it was found to be a cystic lesion with dirty fluid collected in posterior wall of uterus, and it was excised.

Histopathological examination showed fibroid with hyaline degeneration. Literature search shows that this is a rare cause of puerperal pyrexia. Following surgery, patient’s fever subsided and she was discharged on day 10 post-operative day.

Cause of fever in this patient was not clear. Laparotomy of a patient 2 weeks after LSCS had its own danger of haemorrhage, risk of hysterectomy. However, since patient did not respond to medical management and USG was showing some collection in posterior wall the correct and courageous decision for surgery transformed a potential mortality case into near miss mortality.

An analysis of near miss cases in Ahmedabad found that Eclampsia (29.45%) followed by preeclampsia (25.46%) and severe PPH (22.39%) were the leading cause of maternal near miss mortality.3

A study done in Italy shows that most frequent obstetric morbidity is due to obstetric haemorrhage (50.3%) and hypertensive disorders (19.2%). 4

In a study on near miss at Royal Darwn Hospital in Australia it also showed that major cause of obstetrics near miss was obstetric haemorrhage.5

A study done in Ethopia showed that the main factors associated with maternal near miss were history of chronic hypertension, rural residency, history of stillbirth, no antenatal care attendance and history of anaemia.6

In a study maternal near miss and death associated with abortive pregnancy outcome, it was found that 78 maternal death and 366 near miss occurred from abortion and ectopic pregnancy in 42 Nigerian referral hospitals in 1 year.8

In our set up also, major causes of near miss are hypertensive disorder and obstetric haemorrhage but these cases are being highlighted as they presented as diagnostic dilemma and were a therapeutic challenge. Although laparotomy carries its own risk in such patients but the decision for surgery at appropriate time, changed the diagnosis and patient’s life could be saved.

Once we unfold the reasons for the near miss cases, we can take effective measures to treat these cases. Laparotomy has risks to patient in view of surgical and anaesthesia complications, but taking the risks may change diagnosis leading to appropriate treatment and save patients life.