Sharma and Choudhary: An incidental rare finding of a TRAP sequence during a caesarean section: A case report

An incidental rare finding of a TRAP sequence during a caesarean section: A case report

Twin reversed arterial perfusion (TRAP) sequence is an anomaly of monochorionic twin pregnancies where one twin has an absent, non-functioning or rudimentary heart while the other twin may be normal. The condition occurs because of early development of arterio -arterial anastomoses between the umbilical arteries of twin foetuses that share a fused placenta. In this condition, the affected anomalous (acardiac twin) is perfused by the normal twin (pump twin) via an arterio-arterial anastomosis. The affected twin (acardiac twin) presents with malformations such as absent (acradia) or rudimentary heart, underdeveloped or missing head, upper body and limbs. As pump twin has to provide circulation to itself as well as the perfused twin, this increased burden to perfuse acardiac twin increases the risk of developing cardiac failure in pump twin. Here we present such a case of 22-year-old, which was diagnosed per operatively during caesarean section at department of obstetrics & gynecology, Rukshamaniben General Hospital, Ahmedabad.

Twin reversed arterial perfusion (TRAP) sequence is an extremely rare condition seen in monozygotic twin pregnancies. This condition is also known as acardiac twinning. The incidence is estimated to occur in 1% of monozygotic twin pregnancies, with birth estimates ranging from 1 in 35,000 to 1 in 150,000 births.1 The condition occurs because of early development of arterial-to-arterial anastomoses between the umbilical arteries of twin foetuses that share a fused placenta.2 In this condition, one of the twin is anomalous (acardiac twin) with absent or rudimentary or non-functioning heart is perfused by the normal twin (pump twin) via an arterio-arterial anastomosis. The affected twin (acardiac twin) presents with malformations such as absent (acradia) or rudimentary heart, underdeveloped or missing head, upper body and limbs. The pump twin, although structurally normal, is at increased risk of in utero cardiac failure, and mortality rates of 50 percent or higher have been reported.3 Mortality of the pump twin is related to size of acardiac twin. The majority of pump twins are congenitally normal but anomalies are sometimes observed, including cardiogenic defects, gastroschisis and skeletal abnormalities.4 To increase survival chances of pump twin in TRAP sequence, early diagnosis and intervention is required.

A 22-year-old unbooked patient gravida 2, para 1, live issue 1 with previous LSCS came to our Obstetrics & Gynecology OPD with chief complaints of lower abdominal pain since 3 to 4 hours on 13/ 12/19. Her LMP being 25/03/19 and EDD 01/01/20. On general examination: the patient was conscious, oriented and following verbal commands, Mild pallor +, No pedal edema, Pulse - 98 per minute, Blood pressure 110/ 80 mm of hg, RS - B/L air entry + and clear, CVS - S1 S2 +, SPO2 - 99% on air; per abdomen – uterus 36 weeks, mildly irritable, cephalic, FHS +, scar tenderness +; per vaginal – Os admitting one finger, mid to posterior, presenting part vertex, early effaced, minimal show +, no leak; and USG dated 07/12/19 suggestive of single intrauterine live foetus with 38 weeks of maturity, cephalic presentation, AFI – normal, and effective foetal weight of approximately 3.6 kg and EDD of 18/12/19. She was admitted in the hospital and emergency LSCS was planned in view of previous LSCS with scar tenderness in labour. Blood investigation sent, 1 pint PCV reserved. Anaesthesiologist informed and PAC done. The patient was shifted to operation theatre. Spinal anaesthesia was given. Emergency LSCS was done. Baby was delivered in cephalic presentation. The baby cried soon after birth. Baby was handed to paediatrician. A single placenta was removed with intact membranes. Along with placenta, a solid mass measuring approximately 8*5 centimetre was found attached to placental membrane. The uterine closure was done and haemostasis was achieved. Hemodynamically stable patient was shifted to ward. The mass found incidentally was inspected later on and was found to have (?) dysmorphic arrangement in terms of malformed head, limbs and body of a foetus. The mass weighed 670 grams. The so "assumed head" portion revealed soft hair and a 4*3 centimetre swelling seen at the junction of head and neck. Malformed limbs could also be visualised. An X-ray (PA) of the mass was taken demonstrating the vertebral column. The mass so found was assumed to be the perfused (non-pump) twin of a monochorionic twin pregnancy affected by TRAP sequence. The postnatal period of the mother was uneventful.

Gross photo of the anomalous twin 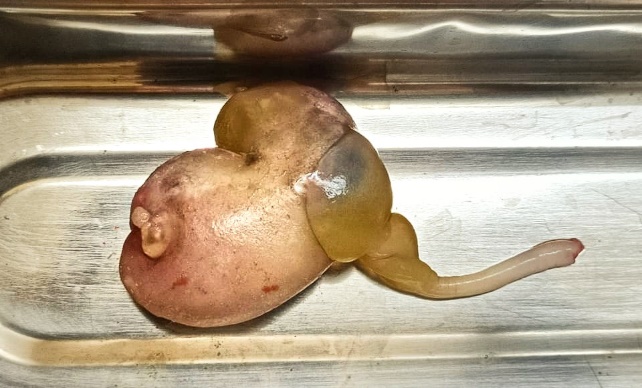 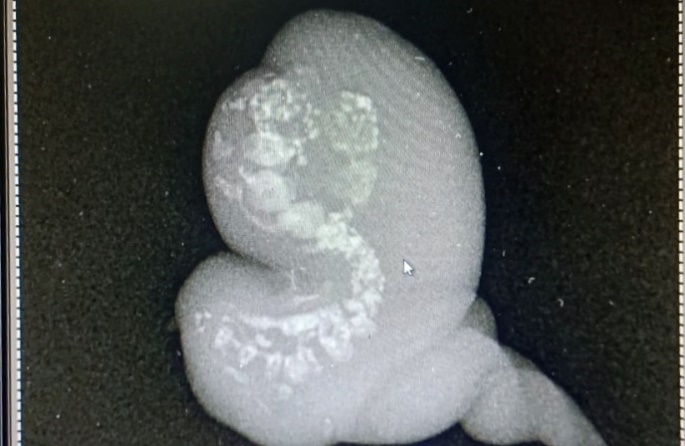 In TRAP sequence deoxygenated blood flow through arterio-arterial anastomosis from an umbilical artery of a normal twin (pump twin) to an umbilical artery of a perfused twin (acardiac twin) in a reversed direction. The blood supply of perfused twin is primarily deoxygenated which leads to a varying degree of deficient development of heart, head, body and upper limbs. A bizarre range of anomalies can be seen in the acardiac twin, including anencephaly, holoprosencephaly, absent limbs, absent lungs or heart, intestinal atresias, abdominal wall defects, and absent liver, spleen, or kidneys.5 Two criteria must be met for the elaboration of a TRAP sequence. The first is arterio-arterial anastomosis and the second is the discordant development5 or in utero demise6 of one of monochorionic twins, allowing for the blood flow reversal. The increased burden to perfuse the parasitic twin puts the pump twin at risk for congestive heart failure and hydrops.7 Up to one third of the fetuses also have an abnormal karyotype.8 Not uncommonly pump twin has a normal karyotype, while acardiac twin have chromosomal abnormalities.9, 10 Higher rate of spontaneous IUFD is seen in embryos/foetuses with chromosomal abnormalities, which in dichorionic twins would lead to a vanishing twin. However, by occurrence of a persistent and reversed flow to a chromosomally abnormal twin through arterio-arterial anastomosis, the vanishing can be prevented in monozygotic twin. Whenever in monochorionic twins single IUFD is suspected on first trimester scan keeping in mind differential diagnosis or development of TRAP, a follow-up scan should be arranged.11

TRAP sequence is characterized by extremely malformed foetuses either have no heart at all (holoacardia) or only rudimentary cardiac tissue (pseudoacardia) in association with other multiple developmental abnormalities. Cystic hygroma and marked hydrops are frequent particularly towards the end of pregnancy. The diagnosis can be reliably made through ultrasound during the first trimester.12 Poorly defined foetal parts and absent cardiac pulsation in one monozygotic twin are suggestive of the diagnosis of TRAP. The definitive diagnosis is made with colour Doppler demonstrating reversal of blood flow within the abnormal foetus. The paradoxical direction of arterial flow towards the TRAP twin and retrograde flow in the TRAP twin’s abdominal aorta is the characteristic blood flow pattern.

Early diagnosis of TRAP sequence enables both invasive and conservative treatment to be offered to the mother to reduce the amount of compromise of the pump twin.

The authors claim not to have any competing interests.