Background: Abnormal uterine bleeding (AUB) is a frequently encountered clinical presentation in gynecological OPD. They are not life threatening but can cause social, psychological and occupational disturbances. As thyroid hormones play a major role in the menstrual and reproductive function of women, studying for thyroid disorder in patients with AUB should be a logical step.

Materials and Methods: This is a prospective observational study conducted in Kalinga Institute of Medical Sciences, BBSR, Odisha. Two hundred and eighty patients of age group 18 to 45 years presenting with AUB were included in this study. All were subjected to routine investigations along with thyroid function tests.

Conclusion: Any type of menstrual disorder should be considered as a possible presenting symptom of thyroid dysfunction and thyroid assessment deemed necessary in such cases, so that we can treat patients at the earliest and prevent morbidities in later life.

Abnormal uterine bleeding is defined as any type of bleeding that is abnormal in volume, frequency, duration and periodicity.1 Frequent complaints include heavy and prolonged menstrual bleeding with or without pain, passage of clots, fatigue and lethargy. Women’s Health Related Quality of Life (HRQL) worsen in dealing with such bleeding and the consequences of excessive blood loss.2

AUB is one of the frequent presentation in gynecological OPD, occurs in 9-14% women between menarche to menopause.3 Menstrual abnormality is primarily a disorder of hypothalamic-pituitary-ovarian axis either directly or indirectly by their effects on target organs. Other than the reproductive hormones endocrinological disturbances also play a crucial role for etiopathogenesis of AUB. Amongst the endocrinological causes, thyroid hormone has a wide range of effect on the development, growth and metabolism of every organ system of human body.4

Variation in production and activity of thyroid hormones that is thyroxine (T4), tri-iodothyronine(T3) and thyroid stimulating hormone (TSH) may cause menstrual abnormality. TSH receptors have been found on granulosa cells. T3, T4 have been found in follicular fluid and T4 can enhance the action of gonadotropins in luteinisation and progesterone secretion – all these facts suggest the role of thyroid hormone in female reproductive physiology.5

The aim of evaluation of AUB is to reach at an precise and clinically useful diagnosis in the most productive and cost effective manner possible. As thyroid disorders are not always detected clinically, we need to detect and treat thyroid disease in patients with AUB before frank signs and symptoms develop.

This is a prospective observational study conducted in Kalinga Institute of Medical Sciences and PBM hospital, BBSR, Odisha. Two hundred and eighty patients of age group 18 to 45 years presenting to Gynecology OPD with complaints of AUB from October 2018 to July 2020 included in this study.

A total 280 patients with abnormal uterine bleeding recruited in this study. And subjected to thyroid profile test. Patients with thyroid dysfunction were grouped as thyroid dysfunction cohort and the remaining patients had AUB were grouped as normal or euthyroid cohort. Factors that were taken for analysis- age, parity, types of AUB, family history of thyroid disorders, size of thyroid gland.

Statistical analysis is done and difference with a p value of <0.05 was considered statistically significant.

In a study population of 280, 80%(n-224) had normal thyroid function and out of the 56 patients with thyroid disorders maximum 26 patients had subclinical hypothyroid, followed by 24 hypothyroid patients and least was hyperthyroid that is 6 patients.

It was observed that most of the patients were multiparous, that is 114 out of 224 euthyroid patients and 25 out of 56 patients in thyroid dysfunction cohort were multiparous. There is a significant association between thyroid disorders with parity.

The Table 4 represent the commonest pattern of bleeding in study population was menorrhagia in both euthyroid and thyroid dysfunction group that is 118 in 280 patients(42.14%), followed by oligomenorrhea(25%) then metrorrhagia(10%), followed by amenorrhea (10%) and polymenorrhea(7.86%) and least no of patients presented with hypomenorrhea.

Type of AUB in normal and thyroid dysfunction group 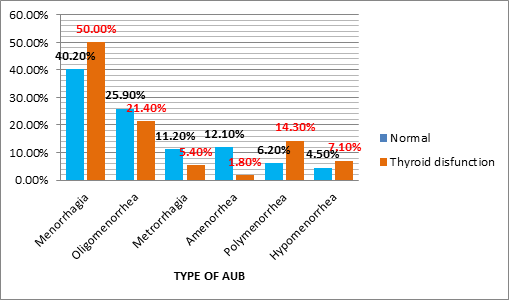 Out of 56 patients with thyroid dysfunction, 25 (44.6%) have enlarged thyroid gland.

So all the study suggests that AUB becomes common as age advances.

Multiparous women comprised the major part of our study population i.e, 139 out of 280 patients (49.6%). Most of the women affected by thyroid dysfunction were also multiparous (44.6%), followed by nulliparous(28.6%). There is a significant association between parity and thyroid disorder. In our study marital status was not included. Similarly, study by Sudha HC et al.8 and Tara et al.7 multiparous patients (83%, 42% respectively) were maximum. In study by Sudha HC et al.8 though maximum patients were multiparous among those who attended OPD with AUB, maximum thyroid dysfunction were found in nulliparous patients (54%).

Thyroid diseases are common worldwide. According to a projection from various studies, in India also there is a notable burden of thyroid diseases. In present study on the basis of TSH, T3, &T4 value, thyroid disorders are divided in to hypothyroid, hyperthyroid and subclinical hypothyroid.

All evidences in literature as well as our findings suggests that subclinical hypothyroid state is an important cause of AUB.

It concludes that thyroid disorder should be considered as an important etiological factor for menstrual abnormality. Thus, thyroid profile test should be mandatory in all AUB cases to detect profound and subclinical thyroid dysfunction.

Dalia Dauksiene12 concluded in his study, that female gender, thyroid nodules, BMI and lower levels of TSH are independently can increase the risk of goiter.

Any type of menstrual disorder should be considered as a potential presenting symptom of thyroid dysfunction and thyroid assessment esteem necessary in these cases, so that we can treat patients at the earliest and prevent morbidities in later life, and also can avoid nonspecific and ineffective diagnostic and therapeutic procedures.

Menstrual abnormality may even precede the occurrence of other clinical signs and symptoms of thyroid dysfunction as 9% of subclinical hypothyroidism was found in our study. The likelihood of progression of subclinical disease to overt hypothyroidism and the cost benefit ratio can play a role to recommend thyroid screening in AUB.