Subburaj and Rajkumar: Menstrual hygiene and their predictors among school going adolescent girls in Tamil Nadu

Materials and Methods: This cross-sectional study was carried out among 244 school going adolescent girls in the field practice area of our institution. The participants were selected using two stage sampling. A structured interview schedule was used to obtain information regarding the demographic details, menstrual problems and menstrual hygiene. The data was entered and analyzed using SPSS software. Chi square test was used to analyze the statistical significance.

Conclusion: The present study has emphasized on the need for creating awareness during the early adolescent age in order to inculcate hygienic menstrual practices. It is essential to make sanitary napkins available and affordable in the lower income groups. Moreover, there is a growing need to incorporate adolescent specific health services in the public health system.

The period of adolescence is characterized by pubertal changes and onset of menstruation. Being a crucial stage of physical, physiological and psychological transition from childhood to adulthood, the vulnerability towards various health issues and high-risk behaviors is higher at this stage. According to World Health Organization, globally, approximately 10 million unintended pregnancies occur among adolescent girls aged between 15-19 years each year.1 The high risk sexual exposures during the adolescent age group also significantly increases the risk of sexually transmitted and reproductive tract infections. Therefore, it is essential to provide adequate focus on the knowledge and practices related to menstruation, focusing on the adolescent age group, in order to ensure minimal exposure to these high-risk behavior and other reproductive health problems in their adult life.

Menstruation is a routine event in a woman’s life. Throughout the reproductive life, women are often exposed to one or more of health risks associated with menstruation, namely dysmenorrhea, menorrhagia or irregular menstrual cycles. The prevalence of menstrual problems in a developing country like India is as high as 87.7% among the adolescent girls.2 Majority of these menstrual problems stems from lack of awareness towards menstruation and poor menstrual hygiene practices. Studies have shown that poor menstrual hygiene practices in terms of using unhygienic absorbent materials, poor hand washing practices were highly prevalent in India.3

Several risk factors have been attributed to these vulnerabilities among the adolescent age group. While these issues are highly prevalent among the lower socioeconomic groups, lack of awareness and inadequate access to health care services have been major causes. In addition, the scope for adolescent specific health services is significantly lower in emerging economies like India, especially in the public health infrastructure. This warrants the need to focus on adolescent specific issues and their risk factors. The present study was carried out to estimate the prevalence of menstrual problems and to assess the menstrual hygiene practices among the school going adolescent girls.

This cross-sectional study was carried out among the school going adolescent girls in the field practice area of our institution, Madurai. All the adolescent girls aged above 10 years and attained menarche atleast one year prior to the data collection period were taken up for the study. The study was conducted for a period of three months between December 2018 and February 2019.

Based on the previous published literature, the prevalence of menstrual problems was found to be 87.7% in Tamil Nadu.2 At 95% confidence limits and 5% relative precision, the sample size was calculated as 215.5. Accounting 10% for nonresponse, the final sample size was arrived at 236 and was rounded off to 240.

A two-stage sampling technique was employed in this study. The field practice area of our institution consists of 13 high and higher secondary schools (both government and private). Each school was individually approached for obtaining permission for the study. Out of the 13 schools, five schools consented for the study. The sample size was divided among these five schools by probability proportion to size sampling. Within each school, the list of girls studying from classes VI to XII were obtained from the register. The required number of participants from each school was selected from this list, using simple random sampling based on computer generated random numbers.

The present study showed a high prevalence for dysmenorrhea (75.4%) out of which 42.9% had moderate pain. Among the other menstrual problems, irregular menstrual cycles was observed in 26.2% of the participants, while menorrhagia was seen in 34%. The predominant systemic symptom associated with menstrual problems was backpain (58.6%). (Table 2) 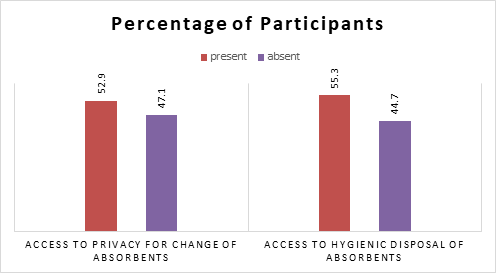 Among the various factors which affect the menstrual hygiene, it was observed that washing genitalia with plain water was more prevalent among the age group >15 years (80%) compared to the age group of <15 years (77.1%). The observed difference was statistically significant. Similarly, participants >15 years of age were increasingly practicing poor hygiene (no bath during menstruation) (23.3%) compared to participants <15 years of age (8.4%). The observed difference was statistically significant (p<0.05). (Table 5)

In this study, socioeconomic status was observed to be a significant predictor for the type of absorbent material used. While majority of the participants in the upper classes use sanitary napkins, cloth and other materials were used predominantly by the lower and upper lower classes. The observed difference was found to be statistically significant (p<0.002). (Table 6)

The place of residence had a significant impact on the health seeking pattern of the study participants. It was observed that participants in the rural area had increased use of over the counter medicines (91.4%) compared to their urban counterparts (68.9%). The observed difference was statistically significant (p<0.023). (Table 7)

Role of residence in choice of treatment

In this study, dysmenorrhea was the most predominant menstrual problem (75.4%) followed by menorrhagia (34%). Moreover, backpain was also highly prevalent (58.6%) among the study participants. The above findings were similar to the studies published in South India, with dysmenorrhea being the predominant menstrual problem in a study done by Ravi R (72.6%), Rafique N (89.7%), Omivdar S et al (66.8%).2, 4, 5 Although menstruation is a normal phenomenon, the burden of menstrual problems is increasing among the adolescents, as observed in the present study and published literature. The increasing prevalence of menstrual problems significantly impacts the physical and psychosocial well being of these adolescents, causing poor social well being and interpersonal relationships with 78.5% reported school absenteeism and poor participation in social and sports activities as high as 51.1%.6

The health seeking behavior for the menstrual problems was evaluated in the present study and it was observed that 72.1% of the participants consumed over-the-counter medicines for the menstrual problems while 27.5% took physical rest. The prevalence of over-the-counter medicine consumption was higher among the participants from rural area (91.4%) compared to the urban areas (68.9%). The observed difference was statistically significant (p<0.05). In a study done by Acheampong K et al, 34.6% of the participants with dysmenorrhea practiced self- medications, which was lower than our study estimates.8 Very few studies have documented this observation. A study done by Selvaraj K et al observed that 9.5% of the study population consumed over-the-counter medications for dysmenorrhea, which is lower than the present study estimates.9

Menstrual hygiene is an essential component of menstrual health. The present study has shown a high prevalence of dysmenorrhea, for which majority of the participants practice over-the-counter medications. Considering the significant correlation between socioeconomic status and the choice of absorbent used, there is an increasing necessity to make quality sanitary napkins available and affordable for the lower socioeconomic groups. This can be achieved with the help of public infrastructure and collaborating with co-operative societies. This study has emphasized on the need for creating awareness during the early adolescent age in order to inculcate hygienic menstrual practices. Moreover, there is a growing need to incorporate adolescent specific health services in the public health system to reach out to the adolescent girls in order to prevent hazardous practices like over-the-counter medication use.

The study is a part of Madurai Obstetrics and Gynecological Society (MOGS) and the authors are thankful to MOGS for the opportunity.