Introduction: One of the most striking change in the current scenario is the increasing occurrence of non-albicans vulvovaginal candidiasis (VVC), which is considered as the major cause of recurrence, relapse and chronic VVC in India. In the present study we evaluated the effectiveness of three different regimens of itraconazole in the treatment of acute VVC.

Results: All the groups were effective in relieving signs and symptoms (p<0.05), but on comparison between all groups, there was statistical difference between Group II and Group I & III (p<0.05) and Group III & I (p<0.05). Complete cure i.e. disappearance of signs and symptoms and negative KOH test was maximum in group II (44%) as compared to groups I (12%) and III (17% of the patients). Relapse was least in seen in 11 patients (27%) in Group I, 3 patients (7%) in Group II and 7 patients (17%) in Group III. All the 3 regimens were well tolerated.

Conclusion: In the present study, 2 day high dose itraconazole therapy was found to have better effectiveness compared to conventional regimens. Longer duration of therapy might be required to attain even better cure rates, especially when the incidence of Non Albicans vulvovaginal candidiasis is rising in all parts of the country.

Vaginitis is a common complaint of adult female patients attending gynecological practice and vulvovaginal candidiasis (VVC) is the most common presenting infection. Approximately 75% of all adult women experience at least one episode of VVC in their lifetime.1, 2 Vulvovaginitis is defined as the inflammation of the vagina and vulva and includes symptoms like itching, burning, soreness, discharge, dyspareunia and signs like vaginal and vulvar erythema, edema and vaginal discharge.3

Though majority of the cases are caused by Candida albicans, the rest of the cases are due to non-albicans Candida species, like C. glabrata, C. krusei and C. tropicalis.2, 4, 5 One of the most striking change in the current scenario is the increasing occurrence of non-albicans vulvovaginal candidiasis (VVC), which is considered as the major cause of recurrence, relapse and chronic VVC in India.6 The prevalence of NAC was found to be as high as 60%.7 While majority of adult women experience single episode of Candida vulvovaginitis, a small subpopulation may suffer from repeated episodes several times per year termed as recurrent VVC. And hence effective management of VVC play very important role which depends on accurate diagnosis; selection of specific therapy and good patient compliance.8

Though there are a variety of topical and systemic anti-fungal drugs available for the treatment of VVC still difficult to treat cases of vulvovaginal candidiasis in India are increasing. This possibly has been an outcome of a complex and intrigued interplay between host, fungus, drug and environment.8 Because of this changing face of VVC in India, standard treatment recommendations from the Western and Indian literature are no longer valid. Majority of gynaecologists in India are relying on various experience-based treatment strategies such as higher dose of antifungal, longer duration of treatment etc. for the management of VVC. One such strategy is combination of systemic antifungal drug with intravaginal antifungal therapy. This has proven to be more effective with better clinical cure rate than systemic and topical alone in conventional dose and duration.6

The present randomised, three arm comparative clinical study was conducted at two centres at Mumbai, India from May 2020 to December 2020 after obtaining ethics committee approval (ECR/644/Mh/Inst/2014/RR-17). A total of 123 women aged 18 years or above with symptomatic acute VVC were included in this study. Non-pregnant women who had clinical signs and symptoms of VVC (pruritus, burning, and discharge) and pseudo hyphae present on microscopic examination of a KOH smear were considered for enrolment in this study.

Women with any of the following conditions were excluded from the study: Pregnant or nursing females; women with history of chronic or recurrent VVC and hypersensitivity to azole drugs; women who were known to have diabetes or immunosuppression; women who have received antifungal chemotherapy in past one month; women who were known to have impaired renal or hepatic function; and women with history of concurrent bacterial, viral, or trichomonal vaginal infection. Control examination (1 week from baseline) encompassed assessment of symptoms and signs, and evaluation of side effects if any.

In all patients, the diagnosis was confirmed by direct microscopy and KOH test at baseline. KOH was repeated at the end of therapy on day 7.

Clinical evaluation was consisting of physician assessment on 4 point Likert scale, which was designed for signs and symptoms of VVC like abnormal vaginal discharge, pruritus, dyspareunia, dysuria, erythema and odour. Score of 0 denotes no symptom whereas 1, 2, 3 were defined for mild, moderate and severe symptoms respectively. Based on this assessment, clinical effectiveness was recorded as cure, improvement, failure as follows:

The present study was approved by Institutional Ethics committee and was conducted in accordance with recommendations and regulations of declaration of Helsinki and ICMR.

The statistical significance of the therapeutic outcome were assessed by the chi-square test. Relapse was evaluated clinically on day 28.

After filtering through inclusion and exclusion criteria 123 patients were involved in the study and treated with oral itraconazole and intravaginal fenticonazole. Baseline demographics of these patients is shown in Table 1. Individual characteristics of all subgroups were similar and there were no statistically significant differences among these groups (Table 1). 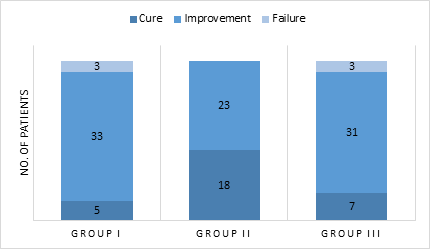 In terms of mean symptom score, all the groups were effective in relieving signs and symptoms (p<0.05) at day 7 compared to baseline, but on comparison between all groups, there was statistical difference between Group II and Group I & III (p<0.05) and Group III & I (p<0.05) (Figure 2).

Comparison of mean total symptom score at baseline and day 7 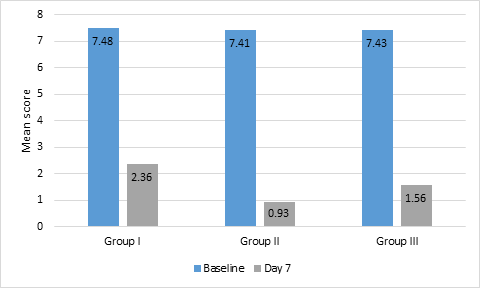 Percentage of patients with relapse at day 28 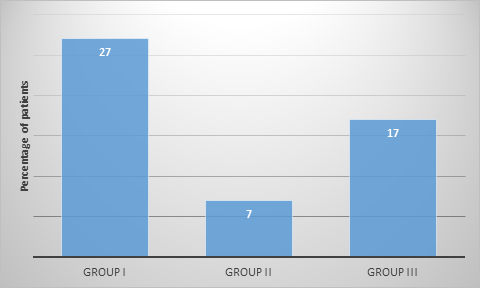 All the patients completed the treatment. There were no adverse events in either of the three groups. All the three regimens were well tolerated.

Vulvovaginal candidiasis is the second most common cause of vaginitis after anaerobic bacterial vaginosis. Although majority of the cases are caused by C. albicans, in recent years, there has been rise in non-albicans VVC.4 The prevalence of NAC is increasing and it was found to be as high as 60% according to an Indian epidemiological studies.7, 9, 10, 11, 12 NAC is less amenable to commonly used antifungal drugs in usual dose and duration.13 In such cases, standard recommendations from Indian and western books are no longer valid and it becomes prudent to use combination of topical and systemic antifungal for complete clearance of the disease. Apart from this practice, many gynaecologists use high dose of itraconazole or any other antifungal for the treatment of VVC.

In our study, we evaluated three regimens of itraconazole in the treatment of acute VVC. Complete cure and clinical improvement was significantly more in Group II as compared to other groups. Additionally, relapse rate was lower in Group II than other groups. In one of the studies,15 itraconazole was compared to fluconazole where 70% cure rate was found in itraconazole group. In another study,16 on comparing two regimens of itraconazole (single day vs three day regime), no statistical difference was found between both the groups which is in corroboration with the findings of the present study.

Mycological cure rate in the present study was found to be 17%, 49%, and 25% in groups I, II and III, respectively. These findings were not corroborative with that of a western world study conducted by Spacek et al, wherein itraconazole was given in standard doses (corresponding to groups I and III of the present study). The mycological cure rate was found to be on higher side in this study.16 Most probable reasons for such discrepant results might be the study period, since the study was done 15 years back and secondly, rise of NAC in current scenario has become a major hindrance in achieving good cure rates.

As compared to other published study, we have noticed less percentage of complete cure and high percentage of relapse rate in our study. 16 This might be due to multiple factors like dose and duration of itraconazole therapy and rise of NAC. Owing to these findings it can be anticipated that itraconazole therapy in high dose and prolonged duration will be more effective in increasing cure rates as compared to 1 day therapy, as is recommended in published literature.17, 18 This might explain best cure rates in group II as compared to others in the present study. Rise of NAC can also be an attributable factor for this finding, as it is well known that NAC is less susceptible to conventional antifungal drugs used for treatment of VVC.19

Secondly, itraconazole stays in the vaginal mucosa for longer period than other azoles because of its high lipophilicity.15 The highly lipophilic characteristic of itraconazole results in favourable tissue blood ratio.15, 22  As per one report, dosages of itraconazole 100-200 mg were associated with tissue concentrations that exceed corresponding plasma concentrations by up to 10-fold.21 Also, it has been found that, itraconazole may remain in the vaginal tissue up to four days after a single-day treatment with 200mg twice a day.15, 22 Thus higher tissue concentration increases the likelihood of complete fungal eradication and hence reduction in relapses.15

In our study, in addition to itraconazole, we have used single dose of fenticonazole in all the patients. In view of rise in NAC, it is always better to use a drug which will be active against both, Candida albicans and NAC. Fenticonazole is one such drug which has many advantages like activity against all causative organisms of VVC, good safety and efficacy profile and a unique antifungal mechanism of action.23

Clinicians have a wide array of anti-fungal agents for the treatment of VVC but the single largest challenge to clinicians is achieving complete cure for the same. High clinical cure rates are the norm for uncomplicated VVC caused by C. albicans but the same cannot be said for NAC. All currently available anti-fungal agents achieve clinical improvement without in-parallel mycological eradication, warranting an ever-increasing number of patients colonized with Candida which can also serve as a reservoir for future episodes of VVC. Strategies like combination of topical and systemic anti-fungal agents or high dose/duration of anti-fungal agents are need of the hour to negate these challenges.

In our study, we tried combination therapy in all patients using different dosing schedule of itraconazole. Definitely, there are certain limitations of this study like small no. of patients and lack of culture of vaginal swab to confirm strain of candida species. This necessitates further studies to validate our findings.

In the present study, 2 day high dose itraconazole therapy was found to have better effectiveness compared to conventional regimens. Still, the clinical and mycological cure rates were less in all three groups. Hence it can be anticipated that longer duration of therapy might be required to attain even better cure rates, especially when the incidence of Non Albicans vulvovaginal candidiasis is rising in all parts of the country.

The study was approved by institutional ethics committee.