Sahiwal, Kaur, Garg, and Kaur: Thrombocytopenia during pregnancy and its outcome- A prospective study

Thrombocytopenia during pregnancy and its outcome- A prospective study

Aims & Objectives: The aims of the study were to evaluate causes of thrombocytopenia in pregnancy and to study clinical profile, maternal and perinatal outcome in thrombocytopenic antenatal patients after 28 weeks.

Materials and Methods: A prospective study was conducted in department of Obstetrics and Gynaecology and department of Pathology at Government Medical College and Rajendra Hospital, Patiala.100 antenatal females were included in the study with platelet count <1,50,000/µL and period of gestation more than 28 weeks. The subjects were investigated after detailed history and examination. Maternal and foetal outcomes were observed in all cases.

Results: Out of 100 subjects with thrombocytopenia, 33% had gestational thrombocytopenia, which was the most common cause; followed by preeclampsia/eclampsia (24%). 18% subjects had severe thrombocytopenia. Complications were seen in the form of HELLP (6%), ICU admission (3%), PPH (3%), Puerperal sepsis (1%).

Thrombocytopenia is defined as a platelet count of less than 1,50,000/µL. It is the second most common haematological abnormality in pregnancy after anaemia.1 It is caused either due to increased platelet destruction or decreased production. In pregnancy, most cases are due to increased platelet destruction, which can be caused by an immunologic destruction, abnormal platelet activation, or platelet consumption that is a result of excessive bleeding or exposure to abnormal vessels. A decrease in the production of platelets is less common in pregnancy and is generally associated with bone marrow disorders or nutritional deficiencies.2

Thrombocytopenia can be classified as:3

The causes of thrombocytopenia in pregnancy are: 4

The present study was conducted in the Department of Obstetrics and Gynaecology and Department of Pathology at Government Medical College and Rajendra Hospital, Patiala after approval by the institutional ethics committee.

In the study 100 antenatal women with thrombocytopenia visiting the OPD or admitted in labour room were included after taking written informed consent.

Present history was obtained in detail and high-risk factors in mother were noted. History of previous conceptions was also taken in detail. Medical history such as liver disorders, anaemia, dengue, malaria, bleeding problems, family history of bleeding, history of transfusion and drug history were noted.

Patients were thoroughly investigated after informed consent. Platelet count was done at time of enrolment by three-part autoanalyzer and confirmed on peripheral blood film. Viral markers for dengue, chikungunya was done in all suspected cases. Special investigations like FDPs, fibrinogen levels were done in cases where required. Counts were repeated after transfusions and at the time of delivery.

All the cases were followed up till delivery and any complications that developed due to decreased platelet counts were noted. Interventions were done according to the cause of thrombocytopenia and blood products transfused wherever needed. Maternal and foetal outcome was then noted.

The data was entered in Microsoft Excel and was analysed by IBM SPSS Software version 22. For this data was presented as frequency and percentage. Further we used mean, standard deviation and median and analysed with Pearson’s Chi Square test. A p-value <0.05 was considered as statistically significant.

Platelet count in subjects at time of enrolment into study 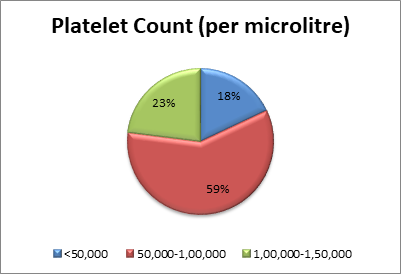 32% patients had mild, 18% had moderate and 20% had severe anaemia at the time of admission. In patients with severe anaemia, platelet counts were also severely reduced.

Most common cause of thrombocytopenia seen in the study was gestational thrombocytopenia (33%) followed by preeclampsia/eclampsia (24%), nutritional anaemia (23%), Dengue fever (12%), Hepatic disorders (5%), Typhoid fever (2%) and drug induced in 1%. (Figure 2) 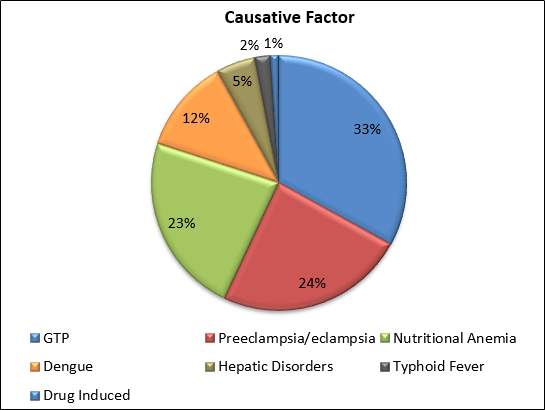 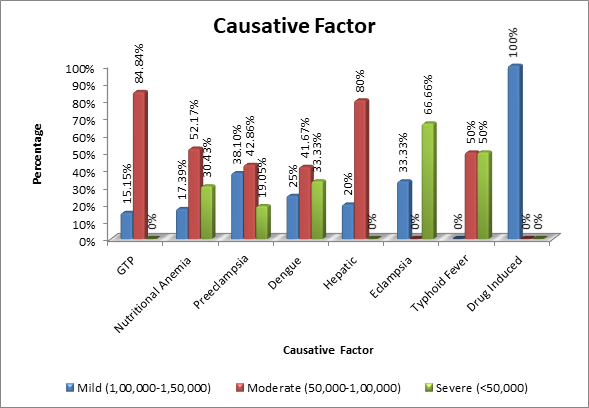 37% patients delivered by Caesarean section which were done for obstetric conditions and not because of thrombocytopenia. And the rest 63% patients delivered vaginally. Maternal complications occurred in 12% patients, in the form of HELLP, ICU admission, PPH and P. sepsis. We observed in our study that subjects with severe thrombocytopenia (<50,000/µL), experienced more maternal complications (44.44%). (Figure 4)

Proportional complication rate in study subjects as per platelet count 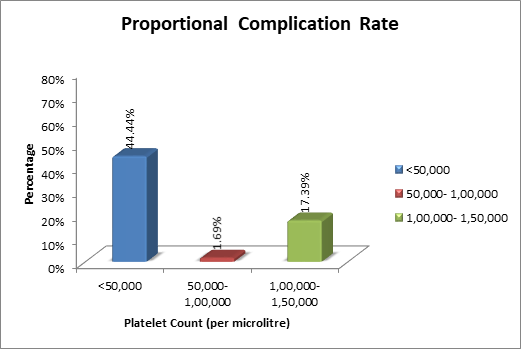 33 subjects required platelet transfusion before delivery, out of which maximum subjects were of nutritional anaemia as a cause of thrombocytopenia and the least were of gestational thrombocytopenia.

The present study was a prospective study conducted on 100 antenatal women with thrombocytopenia.

Causes of thrombocytopenia in various studies

In the present study gestational thrombocytopenia was the most common cause followed by preeclampsia/eclampsia. This was in accordance to the studies done by Nisha S et al.,3 Somani S et al,5 Anita H et al.6 and Vishwekar PS et al.7 Nutritional anaemia as a cause of thrombocytopenia was there in 21% of subjects in the present study making it the third most common cause. This was more as compared to other study groups, maybe due to the fact that our hospital caters mostly to the lower- and middle-income groups of society where nutritional anaemia is more prevalent. 12% subjects had dengue related thrombocytopenia as dengue is endemic in our region.

In our study 37% subjects delivered by LSCS and 63% had vaginal delivery. LSCS was done for obstetric and medical conditions like foetal distress, failed induction, previous two LSCS and not for thrombocytopenia. Our findings are similar to those of Nisha S et al.,3 Arora M et al,10 Varghese S et al.11 and Vishwekar PS et al.7

In our study, 6% subjects landed up in HELLP, 3% were admitted in the ICU, 3% had PPH and 1% had puerperal sepsis. In the study done by Somani S et al.,5 17.46% subjects had massive haemorrhage, 7.94% had P. sepsis. Likewise, Arora M et al10 did a similar study wherein 4.37% subjects had postpartum haemorrhage.

In the present study Apgar score was <9 at 1 minute in 13% babies born to subjects with thrombocytopenia. Our findings were similar to those of Arora M et al,10 wherein 9.5% babies had Apgar score of <9 at 1 minute.

In the present study 51% babies had birth weight between 1500- 2500gm (low birth weight) and 11% had birth weight <1500gm (very low birth weight). 12% of the babies were admitted to NICU. The number of IUDs were three. Out of these two were babies of mothers with HELLP and one with nutritional cause of thrombocytopenia. We did not find any significant relationship between foetal complications and the severity of thrombocytopenia in the mother. Our findings were consistent with those of Anita H et al.6 In their study 49.3% of babies were low birth weight, 28% required NICU admission; and they further concluded that neonatal complications are not directly related to mother’s platelet count. Our findings were in contrast to the study done by Varghese S et al11 who measured foetal outcome in terms of low birth weight, IUGR and preterm deliveries; and suggested that severity of thrombocytopenia has a negative impact on foetal outcome as well.