Introduction: PCOS is one of the common endocrine disorders in women leading to various complications like infertility, menstrual, psychological disturbances and metabolic syndrome. The objectives of this study were to study the clinical and biochemical parameters of metabolic syndrome in women of reproductive age group with PCOS.

Materials and Methods: This cross-sectional study was conducted in a tertiary care centre from September 2018 to June 2020. Fifty six women diagnosed with PCOS, underwent clinical and laboratory assessments for the diagnosis of metabolic syndrome, as per international diabetes federation (IDF) criteria.

Conclusion: The metabolic syndrome and its individual components, like waist circumference and decreased HDL were found to be more common among PCOS patients in this study. As the risk of MetS increases with age and BMI, early screening and timely interventions like lifestyle changes will prevent metabolic complications like cardiovascular diseases and type II diabetes mellitus.

Polycystic ovarian syndrome is a common endocrinal pathology in women with a prevalence of about 5 to 15%.1 American gynecologists Stein and Leventhal first described this syndrome in 1935 hence it is also called as Stein Leventhal syndrome.2 Several long term and short term complications are noted in PCOS women including menstrual disturbances, infertility, Psychological stress and metabolic derangements. If not intervened earlier PCOS may also lead to cardiovascular diseases and diabetes mellitus in the future.3 PCOS and metabolic syndrome share a common entity of insulin resistance. Prevalence of metabolic syndrome differs from region to region and it is also associated with body mass index, gender, race and age.4 Early identification and management of metabolic complications in PCOS patients will prevent long term cardio metabolic risks.5 The objective of this study is to find the association between PCOS and metabolic syndrome.

Insulin resistance in PCOS is independent of adipose distribution and body mass index and it is due to the abnormal serine phosphorylation of the insulin receptors.6 Hyperinsulinemia in PCOS is due to the dysfunction of pancreatic Beta cells which in turn causes increased androgen production and ovulatory dysfunction. Increased androgen production by both ovaries and adrenal gland leads to hyperandrogenism and its consequences.7

Diagnosis of PCOS requires at least 2 of the above criteria to be fulfilled.

There are four phenotypes depending upon Rotterdam’s criteria.11

Waist circumference more than 80cms with the presence of at least two or more parameters given below:

This is a Hospital based cross-sectional study conducted on 56 women diagnosed with PCOS in the age group of 15 to 45 years who attended the Gynaecology OPD from September 2018 to June 2020. Institutional Ethical Committee approval was obtained.

Informed written consent was obtained from the women with history suggestive of PCOS, and they were subjected to a detailed history including menstrual, medical, marital, obstetric and personal history. A complete physical examination was done for the presence of acne, Acanthosis nigricans, male pattern alopecia, hirsutism, height, weight, BMI, systolic and diastolic blood pressure, waist circumference, hip circumference and waist hip ratio. All the patients were screened for galactorrhoea (Hyperprolactinemia) and clinical examination for thyroid and Cushing’s was done and ruled out. Hirsutism was assessed by modified Ferriman-Gallwey scoring and a score of more than or equal to 8 was considered to be hirsute. A thorough gynecological examination including per speculum and per vaginal examination was done. On day two of periods ultrasound was done to look for the features of PCOS and more than 12 peripherally arranged follicles each measuring 2-9mm in diameter or an ovarian volume >10cm3 was considered to be PCO morphology.

On day two of menstrual cycle blood was collected for Fasting plasma glucose, Serum triglycerides, Serum HDL and Serum Total Testosterone. PCOS women were divided into four groups according to Rotterdam’s PCOS phenotypes. Metabolic syndrome was diagnosed based on IDF criteria and it was studied in all phenotypes.

Prevalence of Metabolic syndrome among PCOS subjects was 14.3%. 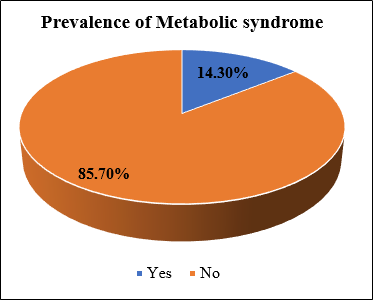 Association between metabolic syndrome and Phenotype

Association between metabolic syndrome and age

Prediction of metabolic syndrome in PCOS women earlier in their disease process will prevent future cardiovascular problems and diabetes mellitus.

There was no statistical significance noted in the prevalence of metabolic syndrome among various PCOS phenotypes. But Phenotype C (18.2%) had a higher prevalence of metabolic syndrome. The next common is Phenotype D which is 15% and phenotype A which is 12% whereas in a study by Sobti S et al.19 the phenotype A (56%) had higher prevalence followed by other phenotypes. This variation is due to subjective differences in assessing the hirsutism.

In this study 20.83% of women with metabolic syndrome belonged to 26 to 35 years age group and 9.37% belonged to below 25 years. Varghese et al.20 conducted a similar study which had a prevalence of 29.4% in 26 to 35 years and in a study by Madani et al.16 below 25 years it was 9.5%. This implies the increase in age as an important risk factor to develop metabolic syndrome in PCOS women.

Elevated fasting blood glucose is the third common parameter noted which was about 87.5% in our study whereas in a study conducted by Das et al.22 it was 24.24%. Differences in ethnicity may be a reason for this variation.

Prevalence of increased triglycerides was 25% in our study which is same as that of a study by Das et al.22 in which it is 22.72%.

Hypertension is the last component in our study with a prevalence of 12.5% which is similar to a study by Mandrelle et al.23 where it was 20%.

Serum testosterone values had no significant association with metabolic parameters in our study which is comparable to a study by Dumont et al.24

There are certain limitations for this study. Our study was conducted in a rural area with no BMI and age matched control. Accurate estimation of metabolic syndrome prevalence in PCOS could not be found out as it was done in a smaller study population. Further large scale studies are needed to exactly determine the association of metabolic syndrome and PCOS in the long run.

The prevalence of metabolic syndrome was found to be 14.3% in PCOS women. Even in the PCOS women without metabolic syndrome group most of them fulfilled at least one or two IDF criteria which make them highly susceptible to develop metabolic syndrome in the future. In this study decreased High density lipoproteins and increased waist circumference were noted in all PCOS women with metabolic syndrome. The next common finding that was noted is increased fasting blood glucose. These findings can be used to formulate a screening policy for MetS in PCOS women. Clinical examination and estimation of serum lipid profile can reduce the risk of progressing to cardiovascular complications and type 2 diabetes mellitus in PCOS patients. As the risk of MetS increases with age and BMI, early screening, proper health education and timely intervention like life style modifications including healthy diet and exercise are necessary in all PCOS women irrespective of age to prevent the late complications of metabolic syndrome.

H Teede A Deeks L Moran Polycystic ovary syndrome: a complex condition with psychological, reproductive and metabolic manifestations that impacts on health across the lifespanBMC Med2010814110.1186/1741-7015-8-41