Shruthi H S, Arunkumar, and Patil: Prevalence of anti-thyroid peroxidase antibodies in the first trimester pregnancy and its impact on maternal and fetal outcomes in a tertiary care centre in Bangalore

Background: Hypothyroidism during pregnancy has an adverse effect on both mother and child. The maternal and foetal risk is higher in TPOAb (Thyroid peroxidase antibody) positive women compared to women with negative TPO Ab. The recent ATA (American Thyroid Association) guidelines recommend that pregnant women with TSH (Thyroid Stimulating Hormone) concentration above 2.5mU/L should be evaluated for TPOAb status and LT4(levothyroxine) treatment should be considered with TSH values between 2.5mU/L and 4.0mU/L only when TPOAb status is positive.

Materials and Methods: All the pregnant women booked in first trimester underwent testing for TSH levels and subsequently for anti TPO Ab if TSH levels were between 2.5-4 mIU/ml. The hospital based prevalence of women with anti TPO Ab positive status was determined. These pregnancies were followed till term and the maternal and foetal complications associated with TPO Ab positive and negative status were compared.

Conclusion: Women with TPO Ab positive status are to be vigilantly monitored for early detection and management of various antenatal complications. Determining anti TPO Ab status helps in avoiding unnecessary treatment of the women with TPO Ab negative status and TSH between 2.5-4mIU/ml.

Autoimmune thyroid disease (AITD) leads to adverse outcomes in pregnancy by causing progressive thyroid dysfunction. Thyroid autoimmunity may also be associated with a higher frequency of preterm deliveries and abruption placenta. Data from the recently published studies emphasises the association between miscarriage and preterm delivery in women with normal thyroid function but test positive for thyroid peroxidase antibodies.3 During first trimester, approximately one in ten pregnant women develop antibodies to TPO or thyroglobulin and hypothyroidism develops in roughly 16% of these women.4 A study has stratified the risk imparted by hypothyroidism according to TPOAb status and consistently show that this risk is higher in TPOAb positive women even when the thyroid function is identical.5 Prompt identification of thyroid disorder and timely initiation of therapy in pregnancy is essential. The trimester specific normal ranges for TSH were as follows- First trimester: 0.1-2.5mIU/ml, Second and third trimester: 0.2-3.0 mIU/ml.

This prospective observational study was conducted in Department of Obstetrics and Gynecology, in our tertiary care hospital from October 2017 to December 2019.

The primary objective of our study was to determine the TPO Ab status of pregnant women in their first trimester of pregnancy with TSH levels between 2.5-4mIU/ml. The secondary objective was to compare the maternal and fetal complications associated with TPO Ab positive and negative status in pregnant women such as early pregnancy loss, pre-eclampsia, gestational diabetes mellitus, intrauterine growth restriction, intrauterine fetal death.

All pregnant women in first trimester of pregnancy with TSH values between 2.5-4 mIU/ml were included after obtaining consent. Pregnant women with hypothyroidism preconceptionally were excluded from the study. Total 400 pregnant women were included in the study. Subjects underwent testing to determine the anti TPO Ab status and were treated according to the ATA guidelines 2017. The pregnancy was followed till term. Thus, the hospital based prevalence of the anti TPO Ab was determined and the maternal and foetal complications associated with TPO Ab positive and negative status were compared.

The data collected was entered into an Excel sheet. The hospital-based prevalence was calculated. The maternal and foetal outcomes with Anti TPO Ab positive and negative status were compared. For continuous variables, differences between the groups were analysed by the Chi square test and p< 0.05 was considered significant. Logistic regression was done to adjust for the potential confounders and also to determine the antenatal complications associated with anti TPO antibodies. p value <0.005 was considered significant.

A total of 400 women in first trimester of pregnancy with TSH between 2.5-4 mIU/ml were recruited in the study. Majority of the women were in the age group of 26-30 years. Primigravid and multigravid women were equally distributed in the study population. About 49% of the pregnant women had normal pre pregnancy BMI and most of them did not have any medical or surgical comorbidities prior to conception. Eight percent of the included women gave family history of hypothyroidism (among parents).

Baseline characteristics of the women

Ninety-four women recruited in the study tested positive for anti TPO Ab, and hence the hospital-based prevalence of anti TPO Ab was calculated to be 23.5%.

Hospital based prevalence of anti TPOAb 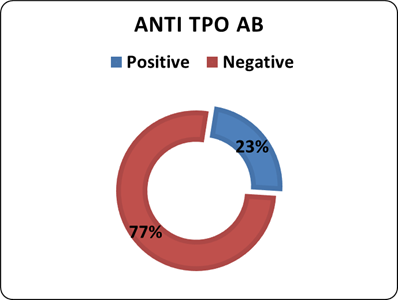 Analysis was done to note if the various parameters in the study population were significantly associated with Anti TPO Ab positivity. Among the women positive for TPO Ab, 17% had history of hypothyroidism in their parents. Fifty percent of those who had family history of hypothyroidism tested positive for TPO Ab. This was found to be significant (p <0.001). The Anti TPO Ab positive status and the development of complications in the antenatal period were found to be significantly associated with a p value of <0.001.

Presence of anti TPO Ab and development of antenatal complications 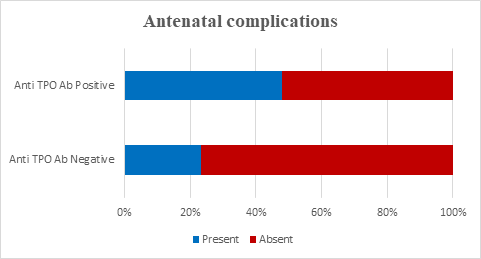 None of the other parameters such as age, parity, BMI, mode of delivery was found to be significantly associated with anti TPO positivity.

On multivariate analysis, development of GDM and IUGR had a significant p value for the association with anti TPO Ab (p=0.004 and 0.003 respectively) as shown in Table 3.

The study is a prospective observational study in which 400 consenting women were recruited over the study period- from October 1st 2017 to December 31st 2019. Each one of them underwent TSH testing as a part of their routine antenatal checkup. Those women with TSH values between 2.5 to 4 mIU/ml underwent testing for anti TPO Ab as per the ATA 2017 guidelines and were treated accordingly.

Primary analysis of the data collected from the study samples showed the hospital-based prevalence of anti TPO antibodies in first trimester of pregnancy with TSH values between 2.5- 4 mIU/ml as 23.5%.

Previously the cut off value for TSH in the first trimester of pregnancy was 2.5mIU/ml. This was revised to 4 mIU/ml in the updated ATA 2017 guidelines. Also, the guidelines recommended that those pregnant women with TSH values more than 2.5 mIU/ml should undergo testing for anti TPO Ab. Guidelines say that the women are to be provided with thyroid hormone replacement only if she tests positive for anti TPO antibodies when the TSH is between 2.5-4 mIU/ml. This is due to fact that patients with TPO Ab positive status tend to develop more antenatal complications as compared to women with negative status with the same TSH value.6 This was established in our study as women with TPO positivity had more complications compared to the those who were negative.

Many studies have been done internationally and in India to identify the prevalence of the anti TPO Ab positivity among the local population and its association between the antenatal complications. The results obtained in this study are comparable to the others in means of prevalence and the associated complications. This has been summarized in the Table 4.

It is important to note that the prevalence of anti TPO Ab when TSH levels are between 2.5-4 mIU/ml is quite low, that is 23.5%. It implies that 76.5% of the pregnant women with TSH values between 2.5-4 mIU/ml need not take any thyroid replacement therapy in the form of Levothyroxine tablets. Though the cost of anti TPO Ab testing is high (about Rs1300 in our study setting), it can prove beneficial in the regard that the financial expenses of taking medications for thyroid replacement throughout pregnancy and in the postpartum period is lowered. About 77% of the cases undergoing unnecessary treatment with thyroid replacement can be avoided by using this small test for detection of the anti TPO Ab.

The secondary analysis has also shown that women with anti TPO Ab are more prone to develop antenatal complications, especially GDM and IUGR.

Thus, it is implied that those women who test positive for anti TPO Ab need more vigilant monitoring and the fact that they are more prone for antenatal complications must be considered throughout their pregnancy.

The results showed that the hospital-based prevalence of anti TPO Ab positivity to be 23.5%. The study also showed that anti TPO Ab positivity is significantly associated with various antenatal complications, especially GDM and IUGR, as evident by a statistically significant p value. Among those who tested positive for anti TPO Ab, 47.8% developed various antenatal complications, whereas only 23.2% developed complications among those who tested negative. The advantage of performing the anti TPO Ab test in the pregnant women is that more than 75% of the women with TSH between 2.5-4 mIU/ml can avoid thyroxine replacement therapy as they are going to test negative for anti TPO Ab.