Vasudeva and Thapa: Colloseum to estimate the accuracy of detection of cervical intraepithelial neoplasia using electrical impedance spectroscopy with colposcopy- A one year study

Background: Cervical cancer is ranked as the second most common cancer amongst women worldwide and in many low-income countries, it is the most common female cancer. ZedScan, enables us to have a first hand estimation of the accuracy of the system and thereby settling and verifying the claims of the manufacturer.

Materials and Methods: It was a prospective study done on a sample size of 200 patients. The patients were selected from amongst all the patients attending the Department of Obstetrics & Gynaecology, Base Hospital, Delhi Cantt, either with a clinical indication or an abnormal cervical cytology. All such cases were recruited into the study with histopathology as a gold standard.

Conclusion: The findings of the study conducted thus suggest that ZedScan has a useful role as an adjunct to Colposcopy in the detection of cervical neoplasia, particularly that of high-grade CINs.

It is possible to prevent mortality due to cervical cancer through various strategies that target women >30 yr of age for screening and treatment.4 The introduction of Papanicolaou test heralded a significant reduction in mortality and morbidity in developed countries , the proportion of women being screened by Pap test vary from 68 to 84 per cent.5, 6, 7 Despite the existence of national guidelines the screening coverage in India is appalling and is mainly attributed to inequality between infrastructure, resources and outsized population.8 As a consequence, often the diagnosis of cervical cancer is based on opportunistic screening or after the onset of symptoms. The clinical screening programmes generally involve Pap smear evaluation and/or screening clinically through colposcopy. However, the clinical performance of colposcopy is subjective and variable, dependent on factors including disease prevalence and training.9, 10 Also, the apparent success of the Pap smear in detecting preinvasive cancer, the expected beneficial impact vis-à-vis mortality reduction has not been significant.3 This situation shows that there is a dire need to increase the accuracy of diagnostic methods for successful detection of cases of cervical carcinoma.

Recently, Zilico has developed a device (the ZedScan)8 that uses cervical electrical impedance spectroscopy (EIS) during colposcopy to help locate cancer or pre-cancerous lesions. The device is claimed to enable clinicians to improve the diagnostic accuracy of colposcopy, meaning effective medical decisions with a need for fewer biopsies and a reduction in over-treatment of mild abnormalities.

EIS works on the principle that all tissues have an electrical impedance. This impedance varies depending on the type of tissue and its components. At high frequencies, more than 1 ghz current enters the cell membrane. The nuclear size and cell volume determine the impedance to the flow of the current.8

Hence, the present study was planned to evaluate and assess the accuracy of the detection of cervical intraepithelial neoplasia using electrical impedance spectroscopy with colposcopy.

This was a prospective, comparative clinical study. The patients were selected from amongst all the patients attending the Department of Obstetrics & Gynaecology, of a 600 bedded tertiary hospital clinic. Sample Size of 200 was selected for the study. Patients aged 25-65 years presenting with the clinical indication or abnormal cytology included in the study. Pregnant women and women actively menstruating at the time of examination were excluded from the study. Ethical approval was taken from the Institutional Ethics Committee. Informed consent was obtained from all the participants before inclusion.

Electrical impedance spectroscopy was carried out by specialised diagnostic system. It consists of a portable handheld device which has a pencil shaped probe on which a single-use EIS sensor is mounted. This sensor incorporates four gold electrodes which record impedance spectra from 12 points on the cervix. Spectra were also recorded from tissue boundaries. Colposcopic examinations, including probe positioning, were recorded to allow for correlations between histopathological diagnosis of colposcopically directed biopsies, colposcopic impression and the diagnosis based on impedance measurements. Impedance measurements using a 5.5mm diameter pencil probe with four 0.6 mm diameter gold electrodes mounted flush with the face of the probe and a current of <20 µA p-p passed between an adjacent pair of electrodes and the resulting potential measured between the two remaining electrodes. Measurements were taken at 16 frequencies by doubling the frequency in steps from 76.3Hz to 625 kHz. The probe was used to take a total of 12 measurements from the cervix Impedance measurements were automatically transferred to software on a laptop. Colposcopy was then performed, and cervical biopsies were taken wherever clinically indicated. The entire procedure from visualisation of the cervix followed by probe positioning, and summed up by haemostasis at the site of cervical biopsies, was recorded for subsequent correlation between results obtained from colposcopic impression, and the histopathological diagnosis of colposcopically directed biopsies and impedance. Colposcopic scoring was done using Modified Reid’s colposcopic Index.11 Histopathology was taken as the gold standard.

Distribution of cases according to parity, menstrual status, contraception usage and age at marriage

Distribution of cases according to diagnostic workup

ZedScan was positive in 16 (8%) cases – thus suggestive of high grade/malignant lesions. It was negative in 184 (92%) cases, suggesting normal/low grade lesions.

Biopsy findings were suggestive of negative status in 174 (87%) and positive in 26 (13%) cases. Among positive cases were CIN I (n=7), CIN II (n=5), CIN III (n=9) and SCC (n=5) respectively. Among 174 negative cases – 113 were negative for the presence of any malignant cell, 34 were diagnosed to have inflammatory cells, and 27 showed focal karyocytes negative for malignant cells.scoring based on Reid’s score were 0-2 indicative of normal/inflammatory findings in 85%, 3-4 indicative of CIN I/II in 5.5% and 5-8 indicative of CIN II/III in 9.5% cases. 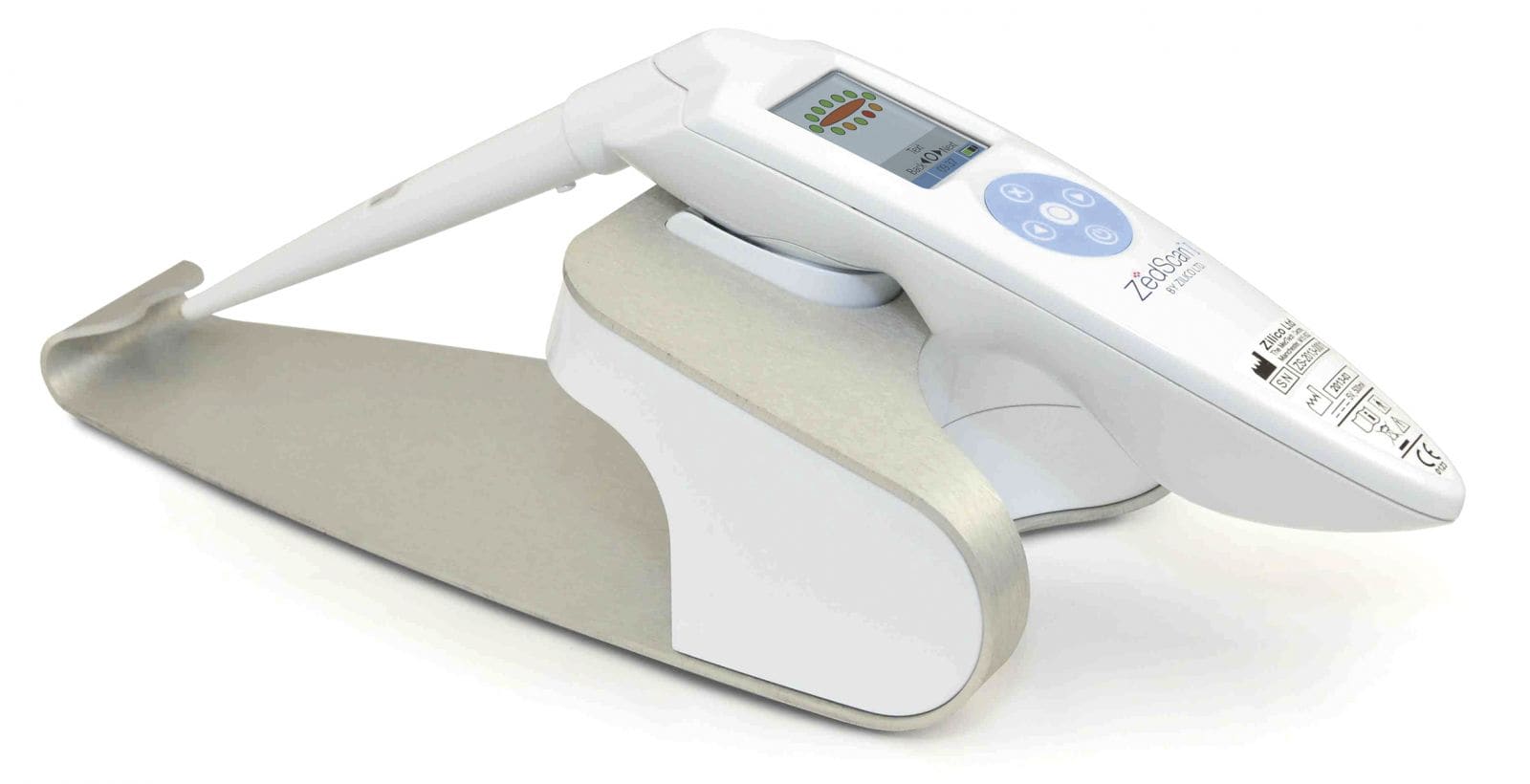 In the present study, an attempt was made to evaluate the efficacy of electrical impedance probe as an adjunct to colposcopy in the diagnosis of high-grade Cervical Intraepithelial Neoplasia (CIN) in women referred with cervical smear abnormalities in day care opds.

200 women with a mean age of 37.48±6.3 years were enrolled in the study. The age profile of women in different studies is ranged substantially. Compared to our study, Das et al.12 had conducted their study in a study population with a mean age of 54.6 years. However, Balasubramani et al.13 conducted their study in a relatively younger population like ours with an age of women ranging from 20 to 55 years. A more recent study by Macdonald et al.14 had included women in the age group of 20.3 to 66.1 years with a mean age of 32.9 years which is younger than that of cases enrolled in the present study. The difference in the age profile of cases included in various studies might influence the prevalence of cervical neoplasms in different study populations.

In the current study, almost all the women (98.5%) were married, and a few 3 (1.5%) were widowed/divorced. Most of the women were sexually active and were in premenopausal (92.5%) stage of their life.

Younger age, healthy sexual activity and premenopausal stage are associated with a relatively lesser risk of cervical cancer. However, there is an increasing emerging consensus emerging regarding the usefulness of screening for cervical cancer even in younger and premenopausal women.9 In the present study too, we had included the women based on clinical features irrespective of age. The higher proportion of women in younger age group and even in premenopausal age group could be due to high level of awareness among our patients who were highly educated (51% educated up to graduation or above) and a generally upper middle/upper class profile (45.5%). Moreover, being in a service hospital where the emphasis is laid on complete diagnosis and cure, all the women, even with minimal suspicion were subjected to screening in order to rule out the minimal possibility of malignancy.

Majority of women enlisted in the study (53.5%) had menarche at >12 years of age and were married at >25 years of age (54%). Both early age at menarche and first sexual intercourse has been reported to be associated with an increased risk of cervical cancer;10 however, in the present study, no such risk was elaborated.

In the present study it was observed that colposcopic scoring based on Reid’s score were 0-2 indicative of normal/inflammatory findings in 85%, 3-4 indicative of CIN I/II in 5.5% and 5-8 indicative of CIN II/III in 9.5% cases. The ZedScan findings were positive in 16 (8%) cases – thus suggestive of high grade/malignant lesions. It was negative in 184 (92%) cases, suggesting normal/low grade lesions. On the other hand, biopsy findings were suggestive of negative status in 174 (87%) and positive in 26 (13%) cases. Among positive cases were CIN I (n=7), CIN II (n=5), CIN III (n=9) and SCC (n=5) respectively. Among 174 negative cases – 113 were negative for the presence of any malignant cell, 34 were diagnosed to have inflammatory cells and 27 showed focal karyocytes negative for malignant cells.

The findings of the study conducted thus suggest that ZedScan has a useful role as an adjunct to Colposcopy in the detection of cervical neoplasia, particularly that of high-grade CINs. However, whether the additional detection will have an economic implication remains to be examined. One of the limitations of the present study was a lower biopsy-proven positivity rate and a relatively smaller sample size, further studies on larger sample size with economic impact as an additional variable for decision making are recommended.