Scar endometriosis is one of the rare types among the extra pelvic endometriosis which is challenging to diagnose. Cystic or solid nodular mass caused by endometriosis are called as endometrioma. It commonly follows obstetrical and gynaecological procedures where there are endometrial manipulations. The symptoms typically involve abdominal wall pain near scar site. Here we report two cases of scar endometrioma involving rectus sheath following caesarean section which are pathology confirmed with a classical clinical presentation and image findings on ultrasonography. By presenting these cases, we emphasize on evaluation, diagnosis, and treatment of caesarean scar endometrioma and increase awareness on this entity.

Endometriosis is defined as unusual presence of functional endometrial tissue including both glands and stroma outside the uterine cavity, and when it is a well circumscribed mass called as endometrioma. Up to 22% of all age groups are affected by this common gynaecological condition among them reproductive and premenopausal age groups are 8-15% and 6% respectively.1

Scar endometriosis can be seen after obstetrics and gynaecological procedures such as caesarean section, episiotomy, hysterotomy, myomectomy, and tubal ligation. Horton et al in his systematic review stated that even though scar endometriosis being a rare entity this condition is becoming more common after caesarean section.2 Lack of awareness to this entity can lead to delayed or misdiagnosis, unnecessary procedures. Here we present two cases with caesarean scar endometrioma and review of literature which may help for earlier diagnosis and treatment by discussing its physical signs, symptoms, and radiological features.

A 25year old, para 1, abortion 1, live birth 1 reported to our Gynaecology outpatient with complaints of intermittent pain at caesarean scar site for 5 months. Her surgical history was significant with one caesarean section done 3 years ago and one suction and evacuation done 1 year ago. On physical examination, a 2x2cm nodule palpated at right corner of caesarean scar, which was slightly tender, firm in consistency with restricted mobility. Ultrasonography showed a distinct hypoechoic lesion with echogenic foci, measuring about 14x9mm seen in subcutaneous plain on right side of caesarean scar site [Figure 1]. A probable diagnosis of scar endometriosis was made and planned for surgical excision. A small transverse incision was given on right side of previous caesarean scar and 2.8x1.3x1.4cm mass was excised from above the rectus sheath. On cut section tissue was greyish white, solid, homogenous in appearance with brownish collection within [Figure 2]. Histopathological examination confirmed to be scar endometriosis by showing fibro collagenous tissue containing endometrial glands and stroma in it [Figure 3]. Patient was followed up for six months at regular times and she was asymptomatic.

Case 1 Resected endometrioma external (a) and cut surface (b) view 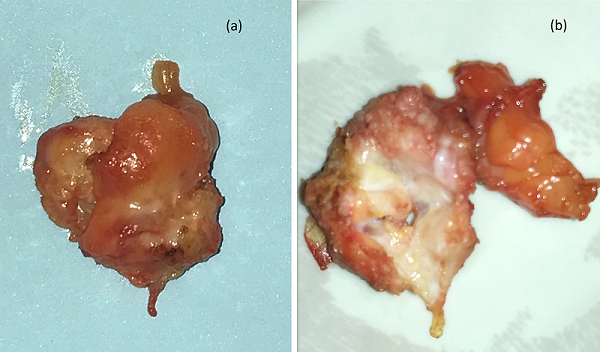 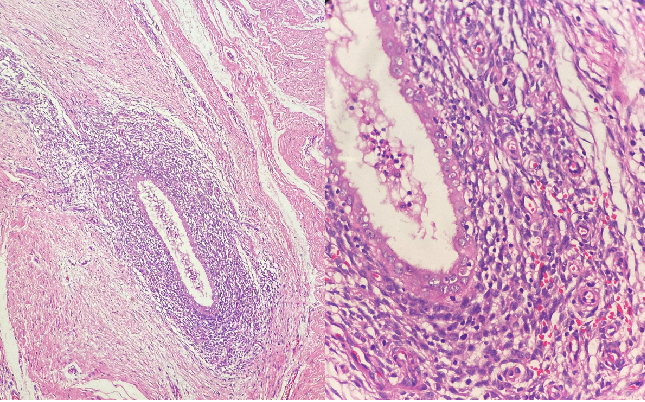 A 23year old para 2, live birth 2 reported to our gynaecology outpatient department with complaints of pain in the lower abdomen near caesarean scar in the last 3 months. Patient described the pain as dull aching constant pain which aggravates during menstrual cycle. Her surgical history was significant with one caesarean section and bilateral tubal ligation done 2 years ago. On physical examination a 3x3cms nodule palpated at left corner of caesarean scar which was tender and firm with restricted mobility. Ultrasonography revealed heterogenous hypoechoic lesion of size 10.3x11.1x9.9mm, noted in subcutaneous plain scar in paramedian region in left iliac fossa adjacent to scar line [Figure 4]. Surgical excision was done, two nodules of size 2x1.5x1cm and 1.5x0.8x0.5cm were excised above the rectus sheath. On cut section tissue was greyish white, solid, homogenous in appearance with brownish stains over it [Figure 5]. Histopathological examination findings showed endometrial glands and stroma, fibrosis, and adipose tissue along with scattered lymphoid aggregates and thin walled blood vessels and confirmed it as scar endometriosis [Figure 6]. Patient was followed up for six months at regular times and she was asymptomatic. 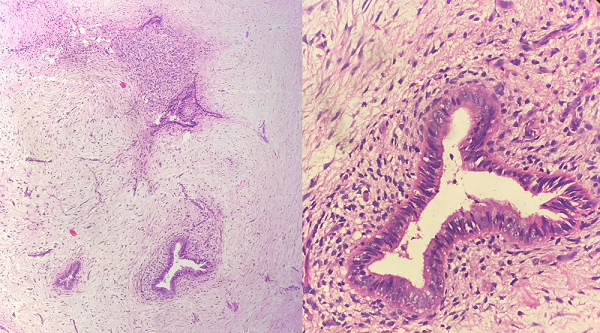 Several theories have been proposed to explain pathogenesis of endometriosis. Implantation theory or transplantation theory due to retrograde menstruation proposed by sampson explains Iatrogenic direct implantation leading to endometriosis in abdominal wall scar which states that viable endometrial cells seeps from the incision made in the uterus and gets seeded within the abdominal wound.1, 3 Later With adequate blood supply, nutrients, and under hormonal influences these endometrial cells proliferate and finally lead to scar endometriosis.

Coelomic metaplasia and Metastatic theory are other theories which explain endometriotic lesions. coelomic epithelium is common origin for both endometrial cells and peritoneal cells and according to coelomic metaplasia theory proposed by Meyer and Ivanoff, metaplasia of coelomic epithelium into endometrial cells give rise to endometriosis. The metastatic theory explains occurrence of rare sites of endometriosis which are far from the uterus, it states that functional endometrial cells might have been transported to extra uterine sites by blood vessels or the lymphatic system.4 Extrauterine endometrial cells which escaped from programmed cell death(apoptosis) gets attached to peritoneum and due to stimulation by osteoprotegerin, neovascularisation will lead to the proliferation of cells to develop an endometriotic lesion.4 Among all these theories Iatrogenic direct implantation theory seems to explain scar endometriosis in most plausible way.

Pasalega et al. in his study stated the risk assessment of endometriosis in scars. It is observed to be 2.7%, 1.5%, 0.5% following obstetric intervention, gynaecologic surgery, laparoscopic procedures, respectively.3 Douglas and Rotimi conducted a study which concluded that Pfannenstiel scar is the most common site of extra pelvic endometriosis.5 Scar endometriosis risk is greatly increased following caesarean section when compared to other gynaecological procedures.6

The study by Zhang et al. provide the first evidence that in caesarean section Pfannenstiel incision has higher risk of scar endometriosis in comparison to the vertical midline incision.7 According to recent study conducted by Zhang et al. and another study conducted by Yan Ding et al. stated that mostly scar endometriomas are observed in the corners of scar.7, 8 This may be due to difficulty of removal of residual endometrial cells from the corners of incision site. Our 2 cases also support these studies as in both patients endometrioma were located at the corner of the scar. Caesarean scar endometriosis can also undergo malignant transformation and observed only 57% rate of survival.9 So, to prevent or decrease the incidence of scar endometriosis taking preventive measures is very crucial. On the basis of direct implantation or transplantation theory preventive measures like taking uterus outside of abdomen before giving incision over it, different needles should be used for closing uterus, peritoneum, and abdominal wall. Appropriate cleaning, flushing, irrigation before closure of abdomen. Avoiding usage of swab for cleaning uterine cavity after delivery and not including endometrial lining while suturing the incision of uterus.2

Abdominal wall scar endometrioma present as pain, swelling near scar which resembles surgical lesions like hernia, hematoma, granuloma, abscess, and tumours. In endometriosis pain is usually described as cyclical pain but constant and noncyclic pattern are also seen as reported in our cases. Time interval between caesarean section and occurrence of scar endometriosis vary from months to years (3 months to 10 years) according to different studies.

According to Hensen et al. Ultrasonography is the most cost-efficient, dependable, and convenient imaging for diagnosis of abdominal wall scar endometrioma.10 The mass may appear as a hypoechoic, heterogenous lesion with internal echoes, as seen in our both cases. Size of lesion, whether it lies above or below rectus sheath and important findings are identified through this imaging for planning surgical excision. MRI can be done for complex cases. Histopathological examination gives confirmed diagnosis showing endometrial gland and stroma in excised specimen. Wide surgical excision with clear margins considered as both diagnostic and therapeutic method.

Caesarean section scar endometrioma should be well thought out in women presenting with cyclical pain or constant pain with nodular mass in the expected region of Pfannenstiel scar. Due to increase in number of caesarean section incidence of scar endometrioma is also increased in recent past. A complete history and physical examination should be performed to have high reliableness with the diagnosis. For diagnosis Ultrasonography is the most useful and reliable investigation. Wide surgical excision with clear-cut boundary is both diagnostic and therapeutic intervention.