Jayaram and Mayadevi: Vaginal leiomyoma in a post menopausal woman

Leiomyomas or fibroids are the commonest gynaecological tumours. It is only very rarely reported as vaginal lesion. It is usually treated by excision of the lesion. This is an interesting case of a 72-year-old lady who presented with vaginal pain and found to have a firm, mobile mass of 4cms x 5cms size located in the middle third of anterior wall of vagina. MRI showed a well-encapsulated solid, round mass with peripheral enhancement localised to anterior vaginal wall. This mass was removed vaginally under anaesthesia. Histopathologic examination of the mass showed leiomyoma.

Leiomyomas or fibroids arising from uterus are the most common gynaecological tumours that are seen in about 20-40% of women after 35 years of age.1 They are also seen in extrauterine sites and may be mistaken for benign lesions like urethral diverticulum, cystocele, abscesses or a vaginal malignancy.2, 3 They are usually seen in women between 35 to 50 years of age.2 Pre-operative diagnosis is usually difficult with imaging techniques like ultrasound and MRI. Diagnosis can be confirmed by postoperative histopathology.

A 76 years old post-menopausal lady, para 2, presented to us with complaints of vaginal pain for past 2 weeks. She had no history of discharge per vaginum, bleeding per vaginum or urinary symptoms. She had attained menopause at 46 years of age. She gave history of asymptomatic small uterine fibroids in ultrasound scans done in her pre-menopausal period. There was history of carcinoma breasts and carcinoma endometrium in her mother.

On pelvic examination she had a firm, smooth, non-tender mass of 5x4cms arising from anterior vaginal wall in mid vaginal region. Uterus and cervix were found atrophied.

Ultrasound scan and MRI was done which showed a well-defined solid round, mass of 4.5x5.5cms size arising from middle third of anterior vaginal wall in submucosal plane with peripheral enhancement, likely to be leiomyoma.

The tumour was enucleated vaginally through a transverse incision over anterior vaginal wall. Urethra was protected during excision by placing a urethral Foleys catheter. The tumour was enucleated by blunt dissection. Vaginal wall closed by interrupted sutures. The tumour was then sent for histopathological examination which showed a 4 × 5 cm solid mass with a typical whorling pattern in the cut section (Figure 1, Figure 2). On microscopic examination features were consistent with leiomyoma - spindle shaped cells organized in bundles and fascicles with vascularized connective tissue in between. Individual cells were seen to have moderate amount of eosinophilic cytoplasm, cigar shaped nucleus with sparse mitosis. (Figure 3)

Patient was followed up at 2 weeks, 6 weeks and 1 year and was symptom free. 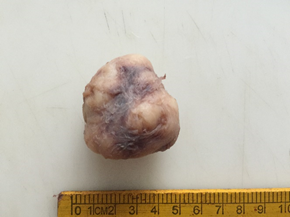 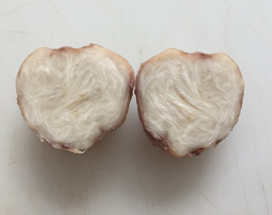 Vaginal leiomyomas are uncommon with only about 300 cases reported so far.2 Denis de Leyden reported the first case of vaginal leiomyoma back in 1733.2 Bennett and Erlich had reported that at Johns Hopkins Hospital they found only nine cases in 50,000 surgical specimens examined and only one case in 15,000 autopsies reviewed.3 Leiomyomas from vaginal wall are extremely rare -constituting only 4.5% of solid tumours of vagina.4

It has been found that leiomyomas occurring in vaginal wall are usually seen in Caucasian women aged between 35 and 50 years.3 They are most commonly seen as solitary well-defined lesions arising from the midline area of anterior vaginal wall.1 Depending on location and size of the lesion patients may present with a vaginal, vaginal bleeding, lower abdominal pain, urinary symptoms due to urinary bladder compression /obstruction or dyspareunia.5, 6, 7, 8

Transvaginal ultrasound is the recommended first-line imaging modality for vaginal masses as per American College of Radiology Appropriateness criteria.9 Ultrasound as first line diagnostic modality is limited by its operator dependence and possibility of bypassing the lesion in perineum or lower vagina when the ultrasound probe in introduced into vaginal fornix.6 MRI is recommended if transvaginal ultrasound imaging is non-diagnostic.10 In MRI myomas usually appear as rounded homogenous lesions with signal intensities similar to that of the myometrium, with multiple calcifications. Leiomyosarcomas are characterised by absence of calcifications in the lesion.11 If intra-lesional haemorrhage is present it usually points towards a sarcomatous lesion.12, 13

The treatment of choice of vaginal leiomyoma is surgical excision either through vaginal or abdomino perineal approach with utmost care so as not to damage underlying structures like urinary bladder, urethra or rectum. Sometimes reconstructive surgery with simple flaps or myocutaneous flaps might be necessary to correct the defects after removal of large vaginal leiomyomas.4, 14

The gold standard for diagnosis of vaginal leiomyoma is histopathological examination. It has the additional benefit of ruling out any focus of malignancy. If malignancy is found, further treatment either in the form of repeat excision or chemotherapy/radiotherapy may be needed. The histological features of leiomyosarcoma include the presence of two of the following three histological features: cytological atypia, coagulative tumour cell necrosis and 10 or more mitoses per 10 high-power microscopic fields. Now, the presence of coagulative tumour cell necrosis and cytological atypia are considered as the most important features in distinguishing a benign from a malignant smooth muscle tumour.15

Vaginal leiomyomas are rare conditions which can be misdiagnosed easily. Even though leiomyomas are oestrogen dependent tumours which are more common in reproductive age group, they can be found in post-menopausal women also. Use of proper imaging modalities followed by careful excision of the lesion and its histopathological examination is the treatment of choice.

S Watanabe Uterine leiomyoma versus leiomyosarcoma : a new attempt a differential diagnosis based on cellular characteristicsHistopathol2006485638