We are reporting a rare case of partial molar pregnancy coexisting with live fetus termed as sad fetus syndrome. Our case was a 20 years old primi with 18 weeks of gestational age showing partial molar pregnancy coexisting with anomalous fetus with low lying placenta presented with complaints of abdominal pain and per vaginal bleeding. Initially we tried to conserve the pregnancy but she continued on per vaginal bleeding. On the basis of maternal health and fetal prognosis, we decided to terminate the pregnancy with their consent. All the preoperative evaluations were done along with physician and anesthesiologist fitness and she had underwent operative procedure such as hysterotomy. Her post operative course in the hospital was uneventful. We had done post op abdomen with pelvis ultrasound sonography and chest X ray reported as normal. Later she was discharged with contraceptive and advised for monthly regular follow up with beta-human chorionic gonadotropin levels (β-hCG).

Hydatidiform moles are abnormal pregnancies which characterized histologically by abnormal edematous changes of villi within the placenta and are categorized into two such as complete hydatidiform moles or partial hydatidiform moles. Partial mole usually derives from dispermic fertilization of a haploid normal oocyte that forms a triploid karyotype (69XXX, 69XXY,69XYY) leads to the presence of an embryo with multiple malformations that mostly demises in utero during the first trimester.1 Of all pregnancies, the incidence of 0.005 - 0.01% constitutes by partial molar with coexisting live which termed as sad fetus syndrome.2 Most partial moles contain fetal tissue, amnion and with placental tissues. There is a rare condition of partial molar coexisting with live fetus termed as sad fetus syndrome. In partial molar pregnancy, serum Human Chorionic Gonadotropin (hCG) levels are generally lower than in complete molar pregnancy and increased hCG stimulation leads to uterine enlargement, hyper emesis gravidarum, theca lutein cysts, hyperthyroidism and early onset of pre-eclampsia. The clinical presentation due to elevated β-hCG common to all hydatidiform moles is with a rapidly enlarging uterus and the passage of grape-like masses from the vagina. Hydatidiform mole subtypes are usually diagnosed using routine ultrasound assessments early in the first trimester along with β-hCG level. We report a rare case of partial molar pregnancy with anomalous fetus with low lying placenta.

A 20 years old primigravida with 2nd degree consanguineous married since 2years conceived spontaneously came with 4 months of amenorrhea with chief complaints of spotting per vagina and lower abdominal pain for 15 days. History of excessive vomiting for 2 months she was on symptomatic medications. She had done dating scan at 7 weeks of gestation reported as single live intrauterine pregnancy with 1.2cm x 1.0 cm subchorionic hemorrhage noted with left corpus luteal cyst of 2.8cms x 1.8cms. Later her ultrasound sonography at 16 weeks of gestation reported as central placenta with multicystic lesion of 9cms x 8 cms with grade 0 maturity. At 18 weeks of gestation age, her USG reported as single live intrauterine fetus with 12.6cms x 5 cms sized multicystic hyper echoic lesion in lower uterine segment suggestive of partial moles completely covering cervical Os with centrally placed placenta with normal bits of placenta in anterior and posterior ends. Anomaly scan was suggestive of cardiac anomaly with muscular VSD of 1.32 mm in diameter with polydactyly.

On clinical examination, her vitals were normal. On per abdomen palpation her uterus was enlarged than her gestational age corresponding to 22 to 24 weeks at 18 weeks of GA and heard fetal heart sound. Other systemic examinations were found normal. She underwent all work up for molar pregnancy (Table 1).

After obtained emergency fitness from Anesthesiologist and Physician, patient had undergone hysterotomy with lower transverse incision on uterus in view of partial molar pregnancy with anomalous fetus with low lying placenta with bleeding PV after transfused with 2 units of packed cell volume. During surgical procedure, there was excessive grapes like vesicles removed out followed by fetus and placenta. Warmth normal saline wash was given intra operatively. Her intra operative and immediate post-operative vitals were stable. 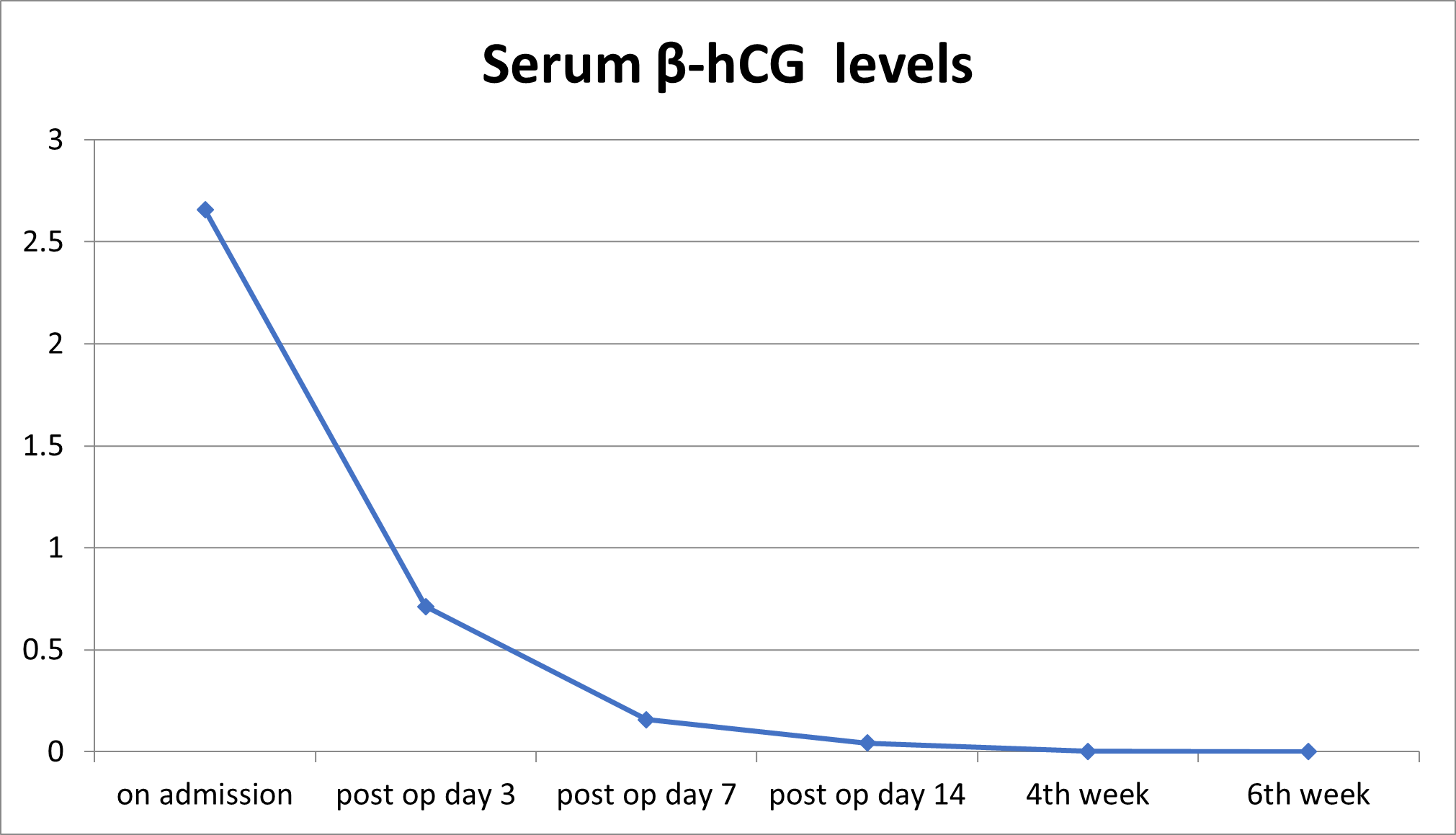 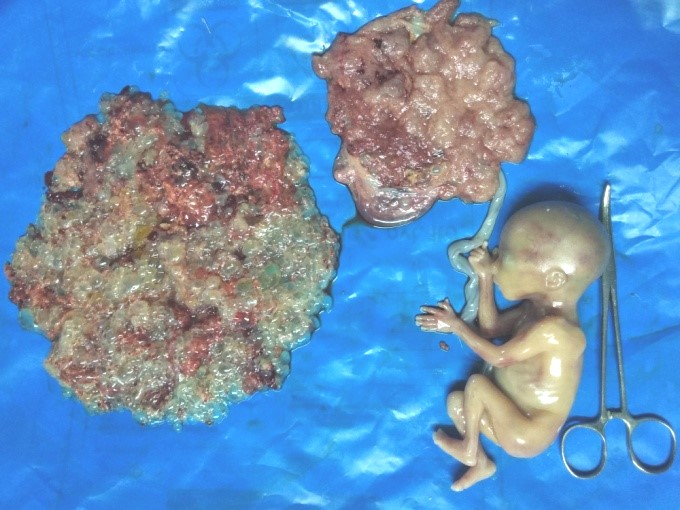 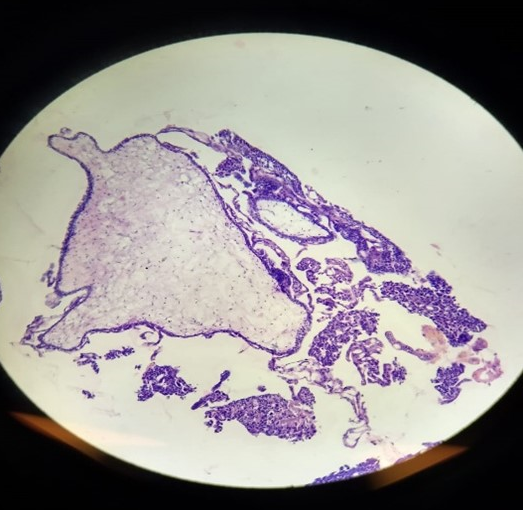 Literature reported with method of termination and its consequences

Multiple pregnancy involving a partial hydatidiform mole and normal fetus is seldom occurring condition. Common presentations include bleeding per vaginum in 90% of cases, anemia in 51.1%, hyper emesis gravidarum in 28.9%, pregnancy-associated hypertension in 12.2%, and thyrotoxicosis in 3%.8 As same in our case, she had bleeding per vagina, anemia, hyperemesis and thyrotoxicosis. Those pregnancies are mostly complicated by hemorrhage, sepsis, thyrotoxicosis, invasive mole, and choriocarcinoma. Management of such pregnancies is a quandary for Obstetricians in giving mode of treatment option for patients. Mostly we prefer to continue the pregnancy till viable period and do cesarean section for better prognosis of fetus as a study reported a case of partial mole with a live fetus with term gestation that resulted in a live healthy fetus.9 Amniocentesis can be done to confirm the normal karyotyping. But in our case fetus already had cardiac anomaly with polydactyly most probably lead to syndromic baby. However, there were high risk of potential maternal complications associated with molar pregnancy, including early-onset preeclampsia, hyper emesis gravidarum, PTD and metastases. Studies reported that patient with uterine size of 4 weeks greater than gestation age with theca lutein cyst >6cm has 50% chances of developing persistent trophoblastic disease.10 But in this case we decided to terminate the pregnancy by hysterotomy as partial molar pregnancy coexisting with cardiac anomalous fetus with VSD with low lying placenta. We couldn’t use prostanoid drugs for termination as there will be chances for vascular embolization resulting to sudden collapse and more chances for persistent trophoblastic disease and metastasis. However vaginal route of termination is troublesome situation as there was central low-lying placenta lead to maternal hemorrhage that may lead to obstetrics hysterectomy. We couldn’t continue her pregnancy also as patient had started per vagina bleeding and she had dreadful thyrotoxicosis as there are 3% chances for congestive cardiac failure if she continues bleeding per vaginum. Amniocentesis can be done for twin pregnancy associated with molar pregnancy mostly for complete mole because partial molar pregnancy has higher chances of abnormal malformations for fetus with defective karyotyping. The previous literature noticed various complications and prognosis with different mode of termination of pregnancy enumerated in Table 2.

Molar pregnancy with a coexistent live fetus is a rare condition. The management of a partial mole pregnancy with a coexistent fetus is especially challenging and difficult situation for obstetrician due to sequence of complications as described before. Ultrasound examination and β-hCG level measurements are the cost-effective way to diagnose in first trimester of pregnancy. Amniocentesis plays important role when there is molar pregnancy coexisting with live normal fetus to decide further continuation or termination of pregnancy based on maternal and fetal prognosis.