Leiomyoma are the commonest benign tumors affecting the female reproductive tract and constitute to around 18-20% of the uterine pathologies that are seen in women of the reproductive age group. Depending on its location in the uterus, fibroids are classified as uterine, cervical and ligamentary of which the cervical fibroids are the rarest and make up only around 2-2.5% of the total incidence of fibroids. Large cervical fibroids give a typical appearance known as “Lantern on St. Paul’s dome” where the small sized normal uterus sits on top of the cervical fibroid mimicking the Lantern on the dome of famous St. Paul’s Cathedral of Russia. This is a report of a case of cervical fibroid which showed the typical appearance and was successfully operated with no organ damage or blood loss.

Cervical fibroids usually arise from the supra vaginal part of the cervix, they are further classified as anterior, posterior, central and lateral.1 The clinical presentation of such tumors depends upon the size and location of the cervical fibroid. Anterior fibroids exert pressure effects on the bladder causing urinary retention or urinary frequency due to pressure over the utero vesical junction. Posterior fibroids press over the rectum thereby flattening it and cause constipation or painful defecation while the lateral fibroids grow into the broad ligament and compress the ureters leading to hydro ureters.2 In rare instances, they present only as abdominal masses with no menstrual or pressure effects as seen in this case report. 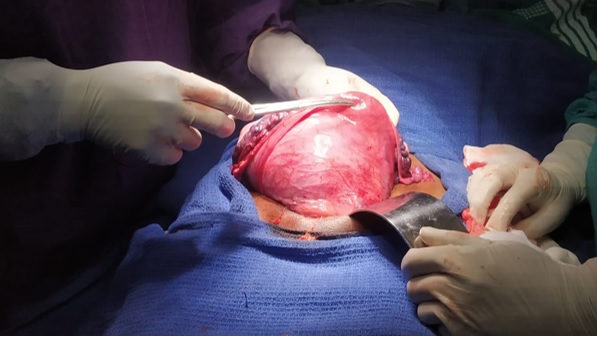 Fibroids or otherwise also known as Fibromas commonly cause menstrual abnormalities like heavy menstrual bleeding, dysmenorrhea, infertility and pressure effects over the bladder or rectum. Some fibroids can also remain asymptomatic without producing any signs and symptoms; such asymptomatic fibroids are diagnosed only during a routine pelvic examination or by an ultra-sonogram. Fibroids are also classified according to their extent of involvement of the uterine wall as Intramural when they are present within the myometrium, sub serosal when they project beyond the myometrium and sub mucosal when they project mostly into the uterine cavity. Pedunculated fibroids have a stalk and those without a stalk are known as sessile fibroids.3 Cervical fibroids are commonly sessile and may grow into the broad ligament causing pressure effects over the ureter and can press upon the bladder anteriorly or the rectum posteriorly. Differential diagnoses include ovarian tumors, uterine inversion mimicking a fibroid polyp or a cervical fibroid.4

Confirmation of diagnosis is by radiological imaging techniques like Ultra sonogram, CT scan and MRI scan. A contrast CT is done to rule out involvement of the ureters and also to delineate the course of the ureter.5

Management of fibroids depends on its size, location and number of fibroids, medical management is preferred if the patient desires to retain her menstrual and reproductive functions. Drugs commonly used to treat fibroids are anti-estrogens like GnRH agonists and antagonist.6 Anti progestogens like Mifepristone, Selective progesterone receptor modulators like Ulipristal. Medical management is considered only as a temporary mode of management as it decreases the size of the fibroid but they do not disappear. Such fibroids do regrow after cessation of medical therapy. Permanent cure can be achieved only by surgical management methods like Myomectomy or Hysterectomy. Myomectomy has the advantage of retaining the uterus but there is always the problem that a new fibroid can develop later on, hence hysterectomy is considered the ultimate surgical remedy for women who have completed their family and are nearing their menopause.

Newer advanced management options of fibroid without removal of the uterus include Uterine Artery embolization and MRI guided High frequency Ultrasonic ablation of the fibroid. These treatment options are costly and also carry the disadvantage of recurrence of a newer fibroid in a different site. They are suitable for single fibroids and of size less than 8cm and not useful in treatment of cervical fibroids. Management of cervical fibroids is preferably surgical either by myomectomy or hysterectomy.

This case report is of a huge cervical fibroid reported from The Institute of Obstetrics and Gynecology, Egmore, Chennai. A 43 year old nulliparous lady presented with lower abdominal pain, distension and heaviness of lower abdomen for past 5 months. She had no menstrual complaints and no complaints suggestive of any pressure effects over the bladder, rectum or ureters. Her menstrual cycles were regular and cyclical with flow lasting for 2-3 days and not painful. She was married for 20 years and there was a history of 2 spontaneous abortions both at two months of amenorrhea, last abortion was 16 years ago. She was not investigated for infertility and was widowed for the past 10 years. On clinical examination she was moderately built and nourished with evidence of mild pallor. On Bimanual pelvic examination there was a firm smooth mass palpable which was arising from the pelvis and measuring around 28cm in height and 18cm in breadth. The mobility was restricted especially in cranio- caudal direction and the mass was not tender. There was no evidence of abdominal free fluid and no other organomegaly. The cervix was not seen on speculum examination as it was hitched high up in the pelvis and was even not palpable on bimanual pelvic examination. A per rectal examination also revealed the same findings.

The examination was repeated under anesthesia, but the cervix was neither visible nor palpable. The abdomino-pelvic mass corresponded to 28 weeks pregnant uterus size. It was not possible to reach the cervix and hence endometrial biopsy and cervical biopsy could not be done. A clinical diagnosis of Cervical fibroid was made after examination under anesthesia.

CT scan was done which reported as Fibroid uterus with normal adnexae and bilateral hydroureteronephrosis.

Laparotomy was done under spinal anesthesia which revealed the typical “Lantern of St. Paul’s Dome” appearance of a huge anterior cervical fibroid with a normal sized uterus sitting over it. Careful identification of the ureters was done and hysterectomy proceeded by keeping as close to the uterus as possible and by working within the capsule of the uterus. Enucleation was not done in this case but care was taken to avoid damage to the ureters and the bladder. Her post-operative period was uneventful. Histopathological examination confirmed a cervical fibroid with hyaline change.

This case is reported for its rarity and its clinical presentation as only an abdomino- pelvic mass with no menstrual complaints and no pressure effects that are common in fibroid uterus. Cervical fibroid was not diagnosed by CT scan but the clinical examination under anesthesia gave the suspicion of possibility of cervical fibroid. The typical lantern on Saint Paul’s dome appearance was seen during laparotomy. The surgery was carefully done with no damage to ureters and bladder and minimal blood loss of less than 100ml only.

A detailed history taking with a thorough clinical examination and if necessary an examination under anesthesia are essential to make an exact clinical diagnosis. Radiological imaging like CT scan can sometimes miss to give a proper diagnosis as had occurred in this case. The abdomen known as the “Pandora’s box” is full of surprises when opened up, it is also emphasized that expertise knowledge is a must when encountered with such unexpected findings during laparotomy. Careful meticulous surgical practices are a must to avoid damage vital organs like bladder and ureter during hysterectomy performed for a cervical fibroid as was practiced in this case.