Keshari, Srivastava, Kesarwani, Pandey, and Mishra: A study on role of cartridge based nucleic acid amplification test (CBNAAT) in diagnosis of genital tuberculosis among patients of infertility and pelvic inflammatory disease

Background: Female genital TB (FGTB)– referring to TB of the uterus, fallopian tubes and/or Ovaries. It poses a diagnostic dilemma because of its varied presentations and lack of sensitive and specific methods of diagnosis, though CBNAAT gives rapid result.

Objective: To study the role of CBNAAT in the Diagnosis of Genital Tuberculosis among infertility and Pelvic Inflammatory Disease (PID) Patients.

Tuberculosis is a major public health issue in the world and India, which is a high incidence country. As per the Global TB report 2017, the estimated incidence of TB in India was approximately 28,00,000 accounting for about a quarter of the world’s TB cases.1 Causative organism is Mycobacterium Tuberculosis. The most common form of extrapulmonary TB is genitourinary disease, accounting for 27% (range 14 to 41%) worldwide. Female genital TB (FGTB) affecting the female genital organs in descending order of frequency are fallopian tubes (95-100%), uterine endometrium (50-60%), ovaries (20-30%), cervix (5-15%), uterine myometrium (2.5%) and vagina/vulva (1%).2

Tuberculous infection of the female genital organs can result in infertility, dyspareunia, menstrual irregularities and chronic pelvic inflammatory disease (PID). A survey by the Indian Council of Medical Research (ICMR) reported that prevalence of FGTB in India has increased from 19% in 2011 to 30 per cent in 2015.

Unlike pulmonary tuberculosis, the clinical diagnosis of Genital TB is difficult. Because of paucibacillary nature, a very high degree of suspicion is maintained in the majority of the cases and the disease is either asymptomatic or has varied clinical presentation.

Multiple diagnostic modalities can be used for diagnosis of female genital TB. Low sensitivity of smear microscopy, time consuming culture sensitivity limits its role in the diagnosis. To address this issue, there was a need for a simple and rapid diagnostic tool atleast for high-burden countries. A new diagnostic test GeneXpert/ cartridge based nucleic acid amplification test (CBNAAT) that is a rapid molecular beacon was developed. CBNAAT is fully automated and based on polymerase chain reaction (PCR) that detects deoxyribonucleic acid (DNA) directly from the clinical specimens and also detects rifampicin resistance.3 This diagnostic test is designed to purify, concentrate, amplify and identify targeted rpoB nucleic acid sequences and delivered the results in about 120 minutes. Though in 2012, W.H.O. has recommended the CBNAAT for routine use under programmatic conditions but its role in the diagnosis of extrapulmonary TB seems to have limited role.4

To study the role of CBNAAT in the Diagnosis of Genital

This was a cross- sectional study done over a period of 18 months (from July 1st, 2018 to Dec 31st, 2019). Convenient sample of 102 cases were taken. After obtaining clearance by Ethical and scientific committee of the institution, 102 Women attending department of Obstetrics and Gynaecology OPD and fulfilling inclusion criteria were enrolled for our study as a suspicious FGTB cases.

Clinicosocial history regarding age, Socioeconomic status based on the Modified Kuppuswamy scale, menstrual pattern, type of infertility (primary infertility when a woman has never conceived and secondary infertility is the incapability to conceive in a couple who have had atleast one successful conception in the past),  past history of TB in any part of the body or history of TB contact (living in the same household or in frequent contact with a sputum smear positive TB patient in last 2 years). Body Mass Index/ BMI (weight in kilograms divided by the square of height in meters) was calculated.

In PID patients, common causes of PID other than M. Tuberculosis-

20 EA, 48 EB sample during luteal phase of menstrual cycle and 34 fluid sample from pouch of douglas was taken for CBNAAT. CBNAAT Samples of EB collected in normal saline containing falcon tubes (container) and EAs & fluid from the POD transported in sterile Falcon tubes. For CBNAAT examination the sample reagent were added at a 3:1 ratio to clinical specimens. The closed specimen container was manually agitated twice during a 15-minute period at room temperature, before 2 ml of the inactivated material (equivalent to 0.5 ml of decontaminated pellet) was transferred to the test cartridge.

Patient with clinical features of genital TB, supported with TB suggestive test like mantoux/ ESR / Hysterosalpingography/ laparoscopy/ hysteroscopy were diagnosed as high suspicious genital TB (GTB+) and remaining were diagnosed as Low suspicious GTB (GTB-) cases as depicted in flow Figure 1. Sputum for AFB examination and Chest X- ray was done in all GTB+ cases to rule out pulmonary Koch.

Microsoft word and Excel have been used to generate graphs and tables. Sensitivity and specificity was calculated. 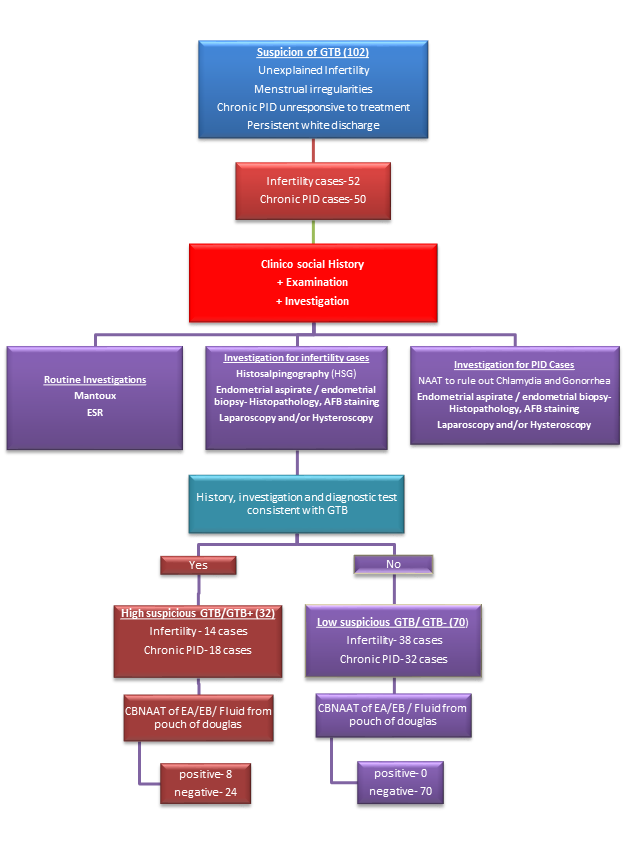 All 52 infertility cases underwent hysterosalpingography (HSG). 10 (19.23%) had finding suggestive of GTB and belonged to high suspicious GTB cases. Fallopian tube block in 7 (50%), Uterine cavity adhesion was present in 1 (7.14%) and beaded appearance was present in 2 (14.29%).

On hysteroscopy, 17 (53.13%) GTB+ cases had finding suggestive of TB. Synechiae, poor endometrium was present in 3 each, tubercle, distorted ostia in 4 each, cervical stenosis in 2 and fibrosis was seen in 1 case.

Study group distribution on the basis of age 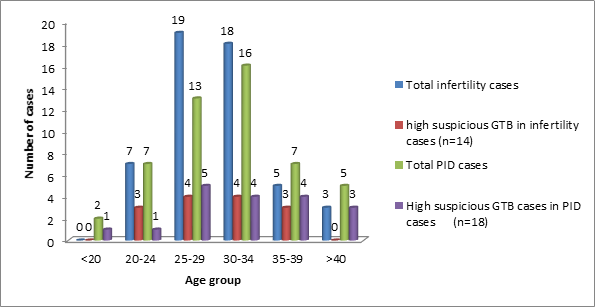 Distribution of infertility group on the basis of nature of Infertility 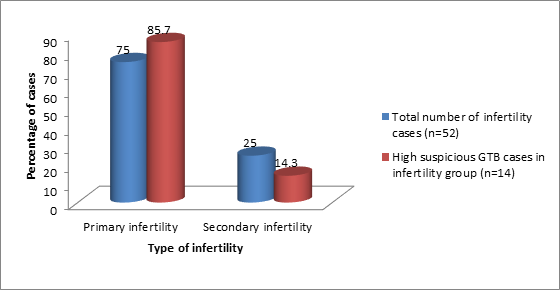 In our study, CBNAAT could detect tubercular bacilli only in 25% (8/32) high suspicious genital TB cases that was diagnosed clinically.

Among high suspicious 32 GTB cases, history of TB contact was present in 12 (37.5%). Thangappah et al7 found history of close contact with tuberculosis only in 4.16% cases.

In our study, out of total 102 infertility and PID cases, 9 (8.82%) had past history of pulmonary TB and among 32 High suspicious GTB cases, 7 (21.88%) had pulmonary kochs, 1 (3.12%) had Abdominal TB and bone TB in each in the past (1 to 15 years back). Similar results were obtained by Arpitha VJ et al.5 In 69 patients in their study, previous history of pulmonary TB was seen in 4(5.9%), abdominal TB in 2(2.8%) and 1(1.4%) patient had history of TB of bones. Similarly, Thangappah et al7 also found only 4(5.5%) infertility cases with past history of tuberculosis such as axillary adenitis, abdominal TB and pulmonary tuberculosis

In our study, Sensitivity and specificity of the ESR test was 78.1% and 77.14%. Khanna A et al11 reported sensitivity of raised ESR 57.69% and specificity 63.51%. Our results are similar to the study of Thangappah et al. 7 ESR was elevated in 11 cases (15%) and there was corroborative evidence of tuberculosis by other clinical parameters in 10 (90.9%) cases.

In our study, all 52 infertility cases underwent hysterosalpingography. 10 (19.23%) cases had finding suggestive of GTB and were kept in GTB+ group. Uterine cavity adhesion was present in 1 (7.14%), Fallopian tube block in 7 (50%) and distorted ostia was present in 2 (14.29%) cases. Our results defer from results of Thangappah et al7 who on Hysterosalpingogram found characteristic features suggesting genital tuberculosis such as distorted endometrial cavity, beaded appearance of the tubes, retort shaped hydrosalpinx, calcified areas and cornual blocks in 35 out of 59 cases (54.2%). In our study, 82 out of total 102 infertility and PID cases underwent laparoscopy. Out of 82 cases, 24 (29.27%) had finding suggestive of TB and kept in high suspicious GTB group (75%). Similar results were seen in the study of Thangappah et al.7 and Arpitha VJ et al6 in which 43(59.7%) and 41(60%) of patient on laparoscopy had abnormal finding suggestive of GTB respectively.

In our study, histopathology sample (HPE) was sent in all 102 cases. Only 3 (2.94%) cases had evidence of tuberculosis. Our results are similar to the study results of Thangappah et al.,7 HPE positive in 6.9% cases and Geetika et al12 HPE positive in 2.38% cases. In our study, 32 sputum sample from GTB+ cases was sent for AFB detection. Only 4 (12.5%) sputum sample were AFB positive.

Only 8 (7.84%) out of 102 CBNAAT sample were reported to be positive for mycobacteria tuberculosis and these cases were from High suspicious GTB group (21.9%). Sensitivity of CBNAAT for FGTB was 25%. PPV was 100% and NPV was 74.4%. Very few study has directly tested the sensitivity and specificity of CBNAAT in the diagnosis of genital TB while role of PCR in the GTB diagnosis was done in many studies. Zahoor et al13 did Gene Xpert in 69 High suspicious GTB patients. Of these, 5 (7.25%) came positive. Our results are similar to review article published by Jai Bhagwan Sharma et al14 stating that CBNAAT has 35% sensitivity and 100% specificity in the detection of FGTB.

In our study, prevalance of GTB was 31.37% and prevalanc of GTB among infertility patient was 26.92% while study of other researchers reported prevalence between 3-39% in infertility group. Thangappah et al7 reported incidence of 38.89% among infertility patients. Prevalance of GTB among PID patient was 36% in our study. Sileshi Abdissha S et al. reported prevalence of endometrial TB 4.6% by PCR in patient who underwent endometrial biopsy because of various gynaecological causes.

While GTB was diagnosed in 32 infertility and chronic PID cases clinically but CBNAAT was positive in only 25% cases.