Background: Aim of the study was to know the seroprevalence of TORCH infection in antenatal women with bad obstetric history and to co relate the same with different clinical presentations.

Result: Seroprevalence for T.gondii, Rubella, CMV and HSV-2 was found to be 12.79%, 11.62%, 04.65% and 02.32% respectively. Highest seropositivity in spontaneous abortions (16.25%) and early neonatal deaths (8.33%) cases was seen with T.gondii infection. In cases with history of IUD (09.37%) and congenitally malformed babies (22.22%) maximum seropositivity was found for Rubella. History of still births (25%) was equally associated with T.gondii and Rubella infection.

Conclusion: There is a need of screening programmes during antenatal visits to reduce repeated pregnancy wastages in our country. Early detection of IgM by Enzyme-linked immunosorbent assay is useful for diagnosis of TORCH infection to reduce adverse fetal outcome.

Pregnancy loss is a frustrating and challenging problem for couples and clinicians alike.1 It is well realized that at least 12-15% of all recognized conceptions end in miscarriage, and pre-clinical pregnancy loss rate is still higher- 22-30%.2 Bad obstetric history (BOH) implies previous unfavorable fetal outcome in terms of two or more consecutive abortions, intrauterine death, early neonatal death, congenital malformations, intrauterine growth retardations, still births.3 Cause of BOH could be genetic, hormonal, abnormal maternal immune responses and maternal infections.3 Primary infections caused by TORCH—Toxoplasma gondii, Rubella virus, Cytomegalovirus (CMV), and Herpes simplex virus (HSV)—are the major causes of BOH.4 The prenatal and perinatal infections, falling under the designation of TORCH complex (also known as STORCH, TORCHES, or the TORCH infections), are a medical acronym for a set of perinatal infections, i.e., infections that are passed from a pregnant woman to her fetus.5 The TORCH infections can lead to severe fetal anomalies or even fetal loss. They are a group of viral, bacterial, and protozoan infections that gain access to the fetal bloodstream transplacental via the chorionic villi. Hematogenous transmission may occur at any time during gestation or occasionally at the time of delivery via maternal-to-fetal transfusion.6 The ability of the fetus to resist infectious organisms is limited and the fetal immune system is unable to prevent the dissemination of infectious organisms to various tissues.7 Early diagnosis and appropriate intervention will help in proper management of these cases.8 The prevalence of TORCH infections varies from one geographical area to another.5 In India, due to lack of national screening programme, there is no baseline serological data regarding the presence of an antibody in TORCH infection during pregnancy.9 The social and reproductive maladjustment because of repeated pregnancy wastages, cost of treatment, and morbidity caused to the infant make the TORCH group of infections a major cause of concern.10

The present study was carried out in the department of Microbiology in collaboration with department of Obstretics and Gynaecology at a tertiary care hospital, from November 2016 to October 2018.

Study group consisted of 172 BOH cases attending Antenatal clinic. From each woman 3 mL of venous blood was collected in a vacutainer tube with strict aseptic precautions. Serum testing for TORCH infection for specific IgM antibodies. was done by Enzyme linked Immunosorbent Assay (ELISA) using kits of Ratio Diagnostics as per manufacturer’s instruction. Ethical clearance was obtained from the Ethics committee of the institute. 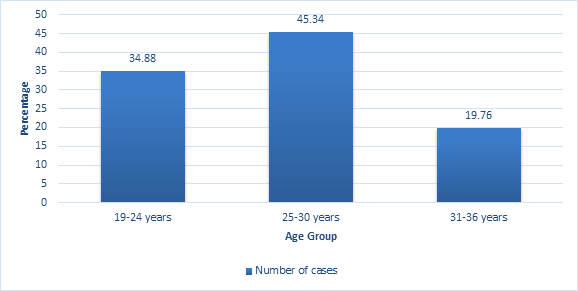 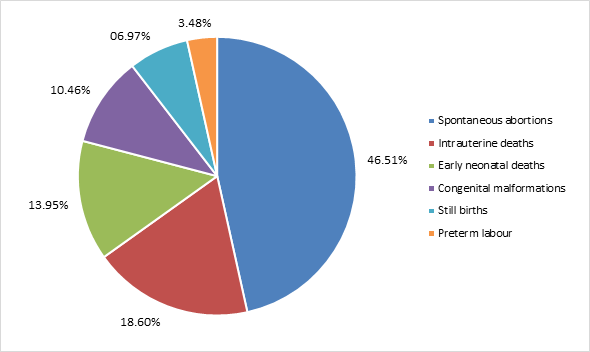 Primary infection with TORCH complex in pregnant women can lead to adverse outcome, which is initially unapparent or asymptomatic and thus difficult to diagnose on clinical grounds.11

Toxoplasma infection is found worldwide, particularly in warm and moist climates. About 20 – 90% of the world adult population is exposed to T.gondii.12 The rupture of encysted Toxoplasma in the uterus of the pregnant women has disastrous ramifications on the developing fetus such as infections, and recurrent miscarriages.10, 13 In the present study, out of 172 samples of BOH cases, 22 were positive for Toxoplasma IgM antibodies with the seroprevalence of 12.79%

This is similar to what has been reported earlier by Yashodhara et al. (2001)14 who observed a seroprevalence of 13.1% for Toxoplasma IgM.

While seropositivity for Toxoplasma IgM has varied from 8.8% by Singh M et al. to as high as 21.54% by Agrawal et al. (2016).15 The difference in prevalence rate between different countries can be explained by variation of geographical and climatic conditions between different areas as the success of oocysts sporulation better in hotter and wetter areas.16

Primary CMV infection during pregnancy carries a high risk of the intrauterine transmission which may result in severe fetal damage, including growth retardation, jaundice, hepatosplenomegaly and CNS abnormalities.18 In the present study, seroprevalence of CMV IgM was found to be 4.65%(08/172), similar to Faldu et al. (2015)5 who observed seroprevalence of CMV IgM to be 4%. Previous studies from India by Parik et al. (2016)9 in Rajkot had reported a seroprevalence of as low as 2% for CMV IgM antibodies to as high as 34.7% by Sen et al. (2012)19 in Varanasi.

The acquisition of genital herpes during pregnancy has been associated with spontaneous abortion, prematurity, and congenital and neonatal herpes.20 Neonatal Herpes which can be acquired in utero from maternal infections, is quite severe and it is associated with a high morbidity and mortality.9

TORCH group of infection is an important cause of perinatal morbidity. Perhaps, India lacks any screening programme for these infection during pregnancy. Therefore, mandatory testing of TORCH agent should be done in pregnant women, especially with bad obstetric history. Increased awareness and health education regarding mode of transmission are required to minimize the risk of congenital transmission and decrease pregnancy wastage.