Context: The most common complication in pregnancy is Hypertension complicating 12-22% of all pregnancies. Among these pre-eclampsia is the leading cause constituting 10% of all pregnancies worldwide. In hospital practice in India, the incidence of pre-eclampsia varies from 5% to 15% and of eclampsia about 1.5%. According to WHO report 2008, eclampsia constitutes for 12% of all maternal deaths in developing countries. Thus it is important to study its Epidemiology and Management strategies.

Materials and Methods: The data is collected after reviewing the medical records of all gravid women with hypertensive disorder of pregnancy who presented between July 2010–July 2014. Data was collected on predesigned, standardised proforma of National Eclampsia Registry.

Results: During the study period there were 22,591 deliveries. There were 1468 mild and severe pre-eclampsia cases and 309 imminent eclampsia and eclampsia cases. The proportion of Pregnancy Induced Hypertension (PIH) cases was found to be 7.85% and that of eclampsia 1.36%. 74.34% of the patients belonged to age group between 20-30 years. 69.11% patients were primigravidas with significant corelation to parity (p value <.00). 68.4% cases were unbooked with p value <.00. 84.3% cases presented between 29-36 weeks. 56.96% patients had headache and 28.48% had headache with vomiting as premonitory symptoms. 74.4% patients had antepartum, 9.14% intra partum and 16.46% postpartum eclampsia. Increasing proteinuria was significantly related to no. of convulsions (p <.05). Maternal complications were seen in 21.68% cases. Maternal deaths during study period due to eclampsia complications were 1.3%. Perinatal complications were seen in 19.41% babies; prematurity being most common (40%). Low birth weight was seen in 68.09% babies which was statistically significant (p value <0.00). There was no significant change in the incidence of eclampsia over four years.

Conclusions: Present study highlights various risk factors for pre-eclampsia. Unbooked, young primigravida with significant proteinuria are at increased risk for pre-eclampsia-related morbidity and mortality. As doctor to patient ratio is below par, the role of ASHA workers is important. Government efforts to track all pregnancies will ensure adequate antenatal care especially to the socio-economically deprived and rural population. Doctors working in peripheral hospitals should have periodic training in the management of preeclampsia and eclampsia to avoid missed opportunities as well as better transport facilities to handle obstetric emergencies.

Key Messages: As no change in incidence of eclampsia over years, ASHA workers to be trained to identify warning signs. Doctors working in peripheral hospitals should have periodic training in the management of preeclampsia and eclampsia to avoid missed opportunities.

International Society for the Study of Hypertension in Pregnancy (ISSHP)6 revised the classification for hypertensive disorders in pregnancy in 2014. Accordingly these disorders are classified as:

Preeclampsia is defined as multisystem, multi-factorial disease with Blood Pressure (B.P) reading of ≥140/90 mm Hg on two occasions 4 hours apart and > 300mg protein in 24 hour urine specimen after 20 weeks of gestation in a previously normotensive woman. Severe Preeclampsia is defined as B.P reading of ≥160/110 mm Hg and >5 gram protein in 24 hour urine specimen or symptoms of end organ failure like derranged Liver Function Tests, thrombocytopenia, oliguria, visual disturbances, pulmonary oedema and fetal growth restriction.1 Eclampsia is defined as the development of seizures which cannot be attributed to other causes and /or unexplained coma during pregnancy or puerperium in a woman with pre-eclampsia. The term “eclampsia” is derived from a Greek word meaning “like a flash of lightening”. Alexander Hamilton (1781) described eclampsia as a disease which always attended with the utmost hazard and frequently kills the woman like a fit of apoplexy.1 Eclampsia is most common in the third trimester and becomes more frequent near term.7 Eclampsia can be antepartum (38-53%), intrapartum (18-36%), or postpartum (11-44%).5 Maternal and pregnancy characteristics identified as risk factors for development of pre-eclampsia are nulliparity, previous history of preeclampsia, maternal age over 40, multiple gestation, molar pregnancy, pregestational diabetes, vascular, endothelial or renal diseases, obesity and certain genetic factors.7 Various biochemical and biophysical markers have been studied to predict the development of preeclampsia. Uterine artery doppler velocimetry showing increased resistance in the late first and second trimesters is the only reliable predictive test for the development of preeclampsia. Currently no other test is reliable, valid or economical and have poor sensitivity and poor positive predictive value. Various strategies used to prevent or modify the severity of pre-eclampsia have been evaluated but none of them is found to be convincing or reproducible.8

The definitive treatment for eclampsia is delivery of the baby.5 Maternal and perinatal mortality and morbidity due to preeclampsia can be prevented by providing a good access to quality antenatal care, early diagnosis and identification of risk factors, careful monitoring and timely interventions.4 The perinatal mortality due to eclampsia is high upto the extent of about 30-50%.5 Poor fetal outcome is attributed to iatrogenic prematurity, respiratory distress syndrome (RDS), intrauterine asphyxia, intrauterine growth restriction (IUGR) and intrauterine death (IUD). In addition IUGR may lead to neuro-developmental defects in children at later stages of life.5 Maternal morbidity and mortality is due to disseminated intravascular coagulation (DIC), abruptio placentae, acute kidney injury (AKI), cerebrovascular accident (CVA), cardiovascular complications, Pulmonary edema, HELLP syndrome, Retinal detachment and Aspiration pneumonia.1

The clinical management of eclampsia has gone through many changes to achieve better results. This study was undertaken to assess maternal and fetal outcome in severe Pre eclampsia, imminent eclampsia and eclampsia and to correlate various factors so as to enable us to draw out our hospital policy for management of these subjects to improve their outcome.

Present study is retrospective, descriptive, data based study. The data was collected by reviewing the medical records of all gravid women with hypertensive disorder of pregnancy managed between July 2010–July 2014. The study was approved by Institutional Ethics Committee. Preeclampsia was deﬁned as blood pressure ≥140/90 mmHg along with proteinuria of at least 300 mg/24 hour after 20 weeks of gestation. The criteria to diagnose severe preeclampsia were one or more of the following: Blood pressure ≥160/110 mmHg, proteinuria of at least 5 gram/24 hours, oliguria <600 ml/24 hours or <30– 50 ml/hour, symptoms indicating end organ damage such as headache, visual disturbances, epigastric pain, medical complications such as pulmonary edema, cerebral edema, acute renal failure, hepatic hematoma, and HELLP syndrome.9 Generalized tonic clonic seizures in a preeclamptic pregnant woman, not associated with other causes was considered to be due to eclampsia.

Distribution of cases according to Age of patients

Distribution of cases according to Parity.

Distribution of cases according to booking status

Distribution of cases according to period of gestation 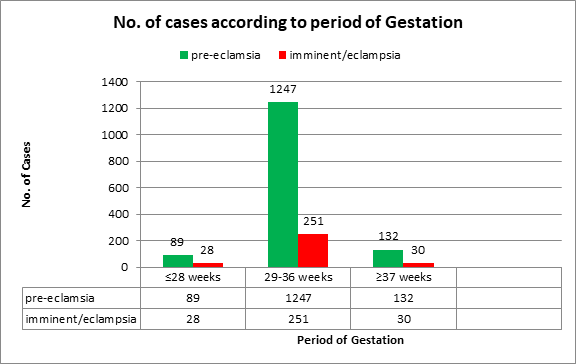 Distribution of cases as per symptoms 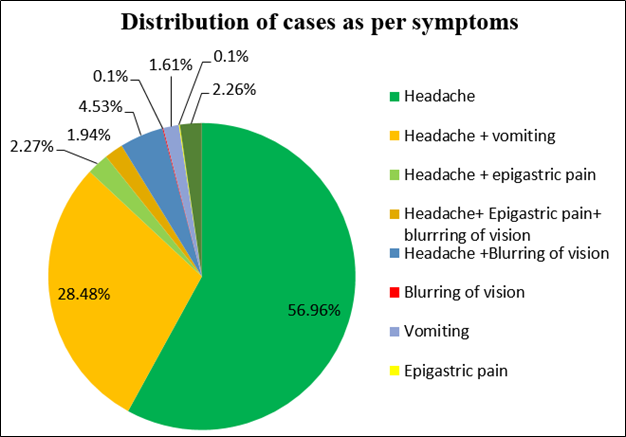 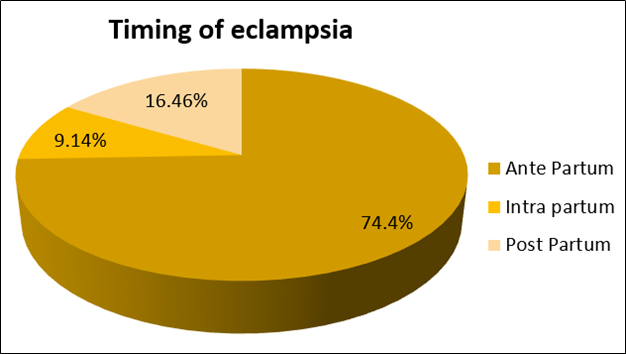 Distribution of patients of eclampsia according to abnormal investigations

Distribution of cases of imminent eclampsia and eclampsia showing relation of urinary protein to No. of convulsions 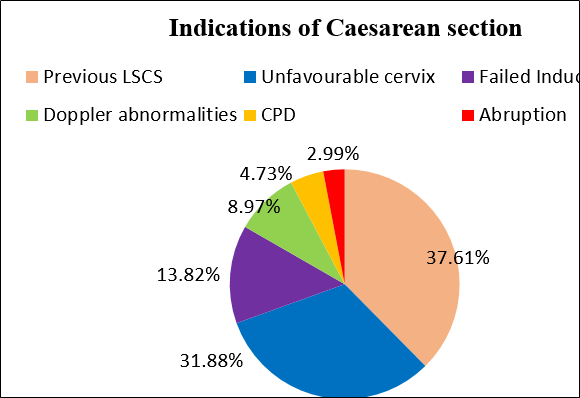 Figure 5 shows that majority of patients were taken up for Caesarean section in view of previous cesarean delivery (37.61%) and unfavourable cervix (31.88%). Other indications for Caesarean section being failed induction (13.82%), Doppler abnormalities (8.97%), Cephalo Pelvic Disproportion (CPD) (4.73%) and abruptio placentae (2.99%).

Maternal complications in patients with imminent eclampsia and eclampsia

There were 4 maternal deaths during study period due to eclampsia complications (1.3%).

Patients with pre-eclampsia and eclampsia delivered babies with low birth weight and this finding was found to be statistically significant (chi-square statistic 439.2834; p-value <0.00) with significance of p-value at <0.05. The distribution of cases according to birth weight is shown in Table 9.

Distribution of cases according to Fetal birth weight

The Perinatal mortality was found to be 18%. The no. of cases were analysed per year. Figure 6 shows the distribution of cases. There was increase in no. of cases detected in successive years. As the cases of imminent aclampsia and eclampsia were analyzed, it was noticed that more cases were detected with imminent eclampsia than eclampsia though the relation was not significant (chi square= 6.4849, p=.37).

Distribution of cases of pre-eclampsia and eclampsia over 4 years 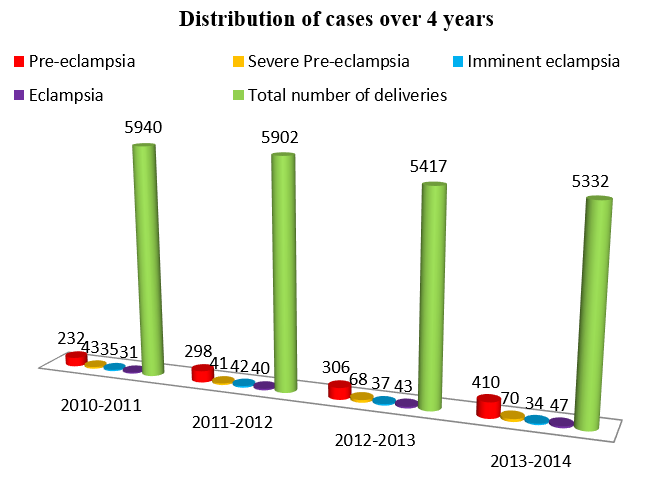 Hypertension can complicate pregnancy and lead to additional problems during pregnancy. These complications have long term effects on both mother and fetus. In our study we found the proportion of Pregnancy Induced Hypertension as 7.87% and that of eclampsia as 1.37%. Findings of our study are comparable to the findings of Nobis PN who reported an incidence of pre-eclampsia in hospital practice in India as 5 to 15% and that of eclampsia as 1.46%.2 Sanjay G reported incidence of Hypertensive disorders as 10.08% and Eclampsia prevalence as 1.9% among eclampsia registry patients in India.3 Incidence of pre-eclampsia was 13.85% as reported by Juhi P, and 8.95% by Yucesoy G.10, 11

In our study 74.34% of the patients belonged to age group between 20-30 years. Similar findings were reported by Shrivastava A et al. (76%) and Singh A et al. (76.8%).12, 13 Majority of patients (40.35%), belonged to age group of 26-30 years. The findings of our study are consistent with the findings of the study done by Pillai SS et al. who ndings are similardocumented 42.72% patients in the age group of 26-30 years.4 These findings are related to the fact that most women conceive first time in this age group.2

Two third of the subjects (69.11%) were primigravidas and approximately one third of them (30.89%) were multigravidas. Our findings are similar to study done by Pillai et al. and Patel et al. who documented 60.90% and 71% patients in their study group being primigravidas respectively.4, 10 Duckitt K reported nulliparity as one of the risk factors in their systemic review of risk factors for preeclampsia.7 Frequent occurrence of pre-eclampsia in primigravidas may be related to failure of normal invasion of trophoblastic cells leading to maladaptation of spiral arterioles.13

Though delivery is the definitive treatment of eclampsia, but convulsions do occur in post-partum period. In present study, eclampsia presented in antenatal period in 74.4% cases, intrapartun in 9.14% and post-partum in 16.46%. The findings are similar to that presented by Raji et al. (77.4% ante partum, 2.7% intra partum & 19.9% post partum).5 Anjani et al presented more No. of antepartum cases(92%) while review by Nobis showed 50.7% cases in antenatal period and 29.37 and 20% respectively in intrapartum & post partum period. 12, 2 It is difficult to differentiate between antepartum and intrapartum eclampsia. In our study increasing proteinuria was linked to increase in no. of convulsions and in turn to maternal and fetal complications.

Pre-eclampsia is one of the medical complications which occur during pregnancy and is responsible for significant feto-maternal morbidity and mortality. As pre-eclampsia cannot be fully prevented, diagnosis of high-risk patients and timely treatment can help prevent complications. As exact etiopathology of pre-eclampsia is still unknown more research is needed in understanding pre-eclampsia to plan effective strategy for predicting as well as preventing adverse outcomes. Education and empowerment of women is need of the hour. As doctor to patient ratio is below par, the role of ASHA workers is important. Government efforts to track all pregnancies will ensure adequate antenatal care especially to the socio-economically deprived and rural population. Incidence of eclampsia in India is remaining same over the decades though maternal mortality has shown slight reducing trend. Unchanged incidence is likely to be influenced by social adversities. Use of MgSO4 in all cases of eclampsia may reduce the death rate. MgSO4 should be used in all cases of imminent eclampsia to avoid missed opportunities. Doctors working in peripheral hospitals and midwives should have periodic training in the management of preeclampsia and eclampsia to avoid missed opportunities as well as better transport facilities are required to handle obstetric emergencies.