Pandya, Khandheriya, Thakor, Modesara, and Patel: Use of 25 MCG for early induction of labour in active management of labour –Study of 100 cases in private setup

Background: Induced labour is one in which pregnancy is terminated artificially, any time after fetal viability is attained by a method that aims to secure vaginal delivery. It is one of the important procedures in obstetrics. The key factor for a successful induction is the cervical status, consistency and dilatation which is determined by the Bishop’s score. Prostaglandins are more effective in cases of unfavourable cervix or in the pregnancies remote from the term. Misoprostol, a prostaglandin E1 analogue is relatively inexpensive, can be easily stored at room temperature and has fewer systemic adverse effects.1 It has rapid absorption both orally and vaginally.

Objective: To determine the efficacy and safety of vaginally administered misoprostol for third trimester cervical ripening or induction of labour in a study conducted on 100 patients in Mahaveer Hospital, Scientific Research Institute, Surendranagar, Gujarat.

Materials and Methods: This was prospective study conducted in private setup from October 2020 to February 2021. Study population comprised of 100 subsequent pregnant women who required induction of labour were recruited after applying inclusion and exclusion criteria. The progress of labour was charted on the partograph. The mean induction delivery interval, mode of delivery, maternal and neonatal outcome and complications were observed.

Misoprostol is a prostaglandin E1 analogue. It is a new agent for pre induction cervical ripening and uterotonic properties.3 It is economical, stable at room temperature with very few side effects and can be easily administered through oral, sublingual, vaginal, buccal or rectal route.4 Most clinical trials have used 25 microgram every six hours intravaginally.5

Tablet 25 microgram misoprostol per vaginally used every 4 hourly for maximum of five doses.

Here is the table showing inclusion and exclusion criteria below:

Detailed history taken, followed by general physical examination was done. Obstetrical examination included lie, presentation, fundal height, fetal heart sound, per vaginal examination for assessing bishop’s score and pelvis. Antenatal USG and blood investigations were done to ensure gestational age. Duration, intensity and frequency of uterine contraction were observed. Study population was examined and vaginal misoprostol was placed in posterior fornix after moistening with saline. Per vaginal examination done every 4 hourly to note the changes in the cervical status. To minimize the infection unnecessarily, per vaginal examination is avoided. Before each successive dose of misoprostol fetal heart monitoring was done and induction continued only if fetal heart rate normal. Progress of labour charted on partograph. Induction was discontinued when the adequate uterine contraction rated as at least 3 contraction/10 min each of 40sec duration. All patients were augmented with 2.5 Unit of Oxytocin in second stage of labour, another 2.5 Unit of oxytocin was given in third stage of labour. A further induction suspended in cases of tachysystole, hyper tonus or hyper stimulation or non-reactive CTG not corrected by primary measures. If the patient did not enter active labour four hour after last dose the induction was considered to have failed and caesarean section was performed.

Vaginal misoprostol: one small study shows that the use of misoprostol results in more effective cervical ripening and induction of labour and to reduce rate of caesarean section by increasing rate of vaginal delivery compared to it.

Table 3 shows the demographic variables of the study group with regards to maternal age and parity. In our study we included 100 pregnant women group in which 64 (64%) women are nulliparous among age group of 20-30 years. 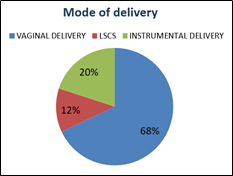 The secondary outcomes are given in Table 5.

84 patients among 100 (84%) require more than 2 doses of misoprostol to effect delivery. Very few side events were encountered during our study.

Misoprostol 25 microgram for induction of labour has been quite promising. Misoprostol administered vaginally is as effective as conventional methods for induction of labour at term. Distribution according to demographic characteristic in our study population was almost similar to study by J Anice SK et al., Rehman et al., and Shetty et al.8, 9, 10

This study shows that women who receive misoprostol vaginally experience faster induction to delivery.11 Time taken for induction to vaginal delivery was significantly less in vaginal group as demonstrated by J Anice et al. and Jindal et al., because vaginal misoprostol is absorbed quickly and removed slowly from body which makes it available to act for a longer time as compared to oral resulting in rapid progression of labour.12

There is wide clinical experience with this agent and a large number of published reports supporting its safety and efficacy when used appropriately. Vaginal misoprostol significantly reduces the time interval from induction to delivery and increases chances of vaginal delivery.

As per 2013 SOCG guidelines which stated that misoprostol is safe and effective agent for induction in labour with intact membrane for impatients. This is somewhat confirmed with our study with more recent data, as analysed we concluded that misoprostol appears to be efficacious and safe for cervical ripening and labour induction. Vaginal misoprostol tablet is most effective in achieving vaginal births relatively rapidly. Misoprostol is considered as a safe agent for labour induction by world health organization (WHO). As per 2011 WHO guidelines WHO recommended misoprostol for induction of labour except in those with previous 2 LSCS (lower segment caesarean section). We have to assess patient’s safety data and monitoring requirements, to ensure safe and better outcomes for pregnant women fetuses and neonates with use of misoprostol in induction of labour.

Off-label drug use and FDA review of supplemental drug application: hearing before the subcommittee on human resources and intergovernmental relation of the committee on government reform and oversight House of representatives, 104th congress, 2nd session199653945USGPOWashington