In Luteal Phase Defect (LPD), endogenous progesterone is insufficient to maintain a functional secretory endometrium and also inhibit embryo growth and implant. In 1960, it was estimated that 20 million pregnancies were exposed to Dydrogesterone in utero. LOTUS I and LOTUS II two major multicenter Phase III studies were conducted on patients who were planning to undergo In Vitro Fertilization (IVF) with or without Intracytoplasmic Sperm Injection (ICSI). The result of both studies shows that Dydrogesterone was non-inferior to micronized vaginal progesterone, which was the presence of fetal heartbeats at 12 weeks of gestation. Progesterone which can be administered either by oral preparation, vaginal administration along with optimal use of estrogen and Gonadotropin-Releasing Hormon (GnRH) agonist drugs is used in the treatment of LPD. Studies have suggested the use of Dydrogesterone in fresh IVF cycles and Luteal Phase Support (LPS) is continued till 10–12 weeks. However, it may be stopped at the time of β-hCG becoming positive or visualization of a fetal heartbeat.

The normal menstrual cycle is divided into two phases: follicular and luteal, which are separated by ovulation and bookended by the first day of menstrual bleeding. The follicular phase is dominated by the development of the preovulatory follicle, resulting in estrogen-stimulated endometrial proliferation, whereas the Corpus Luteum (CL) produces progesterone, which inhibits endometrial proliferation and determines endometrial receptivity. Post-operation progesterone is secreted by the CL. If no fertilization occurs the CL degrades, progesterone levels fall and menstrual bleeding occurs. However, if the fertilization is there then CL is stimulated by the Human Chorionic Gonadotropin (hCG) and it continues to produce progesterone and ultimately once the pregnancy is there and there is a luteal placental shift in 6—7 weeks of pregnancy then the rest of the progesterone is taken over by the CL and ultimately the placenta. Progesterone is required for several processes in early pregnancy stages: preparation of the endometrium for the implantation, decreasing the contractility of the uterine smooth muscle, regulation of cellular immunity, and also mediate uterine blood flow, uterine endothelial adaptation to pregnancy by increasing the nitrous oxide production.

LPD was first described in 1949 by Georgiana Seegar Jones. It is the condition in which endogenous progesterone is insufficient to maintain a functional secretory endometrium and does not allow normal embryo implantation and growth.1

In In Vitro Fertilization (IVF) and Assisted Reproductive Technologies (ART), there is a deficiency of the luteal phase. Many a time after aspiration there is supraphysiological estradiol level caused by overstimulation. Due to the high Estradiol (E2) level, there is a negative feedback of the pituitary which naturally promotes luteolysis and low progesterone level during the luteal phase. Thus, there is a major luteal phase deficiency in ART. Progesterone overcomes this deficiency as it can be seen in all kinds of IVF protocol whether it is the non-agonist protocol which is not in much use nowadays, short agonist protocol, or antagonist protocol, in all the protocols luteal support is needed.

Human chorionic gonadotropin: hCG stimulates the ovaries to induce the production of endogenous progesterone and estradiol in Gonadotropin-Releasing Hormone (GnRH) agonist and antagonist cycles. Various routes for administration are available: vaginal, tablets, gels, suppositories, intramuscular, and also subcutaneous. The problem with hCG is the risk of hyperstimulation. GnRH injection on the sixth day was an established option for luteal support in ART. Estrogen is widely practiced to induce the supplement of progesterone.

Supplementation with exogenous progesterone has been shown to improve the ART outcomes in GnRH agonist and antagonist stimulation cycles. Various products are available: natural progesterone, synthetic progesterone, micronized progesterone, and the retro progesterone namely Dydrogesterone which can be given vaginally, intramuscularly, subcutaneously, and by various other routes. Progesterone improves IVF and ART outcomes and is usually given from the day of Oocyte retrieval and often till 12 weeks. The standard protocol is to start on the day of hCG.

It was estimated that cumulative exposure for all indications is more than 113 million patients in the 1960s and of those, it is estimated that more than 20 million pregnancies have been exposed to Dydrogesterone in utero. Dydrogesterone has been used for many years but there is no definite use in ART cycles and thus two major studies: THE LOTUS I and THE LOTUS II studies were conducted.

The LOTUS I study was a randomized, double-blind, double-dummy, multicenter Phase III RCT study. Patients with infertility who were planning to undergo IVF with or without Intracytoplasmic Sperm Injection (ICSI) were screened for possible study inclusion and enrolled prior to oocyte retrieval. The embryo transfer was either single transfer or double transfer. Only the fresh cycles were studied not frozen cycles. The intervention of this study was to compare 30 mg of Dydrogesterone vs. 600 mg of vaginal micronized progesterone and was started from the day of OPU. Subjects were randomized to receive either oral Dydrogesterone 10 mg tablets three times daily (TID) (Group 1), or MVP 200 mg capsules with oral placebo tablets TID (Group 2). There were 511 patients and the end of the 14 days. Luteal support was started on the day of oocyte retrieval (Day 1) and continued until 12 weeks of gestation (Week 10). The conclusion of The Lotus I study demonstrated that oral Dydrogesterone was non inferior to MVP for the primary objective, which was the presence of fetal heartbeats at 12 weeks of gestation. It also met the secondary objective which was the rate of live births and newborn assessment was similar between the two treatment groups. It is also safe and tolerable, oral Dydrogesterone had similar safety profile to micronized vaginal progesterone with more new safety concern identified in the study and the implication were the oral Dydrogesterone may replace micronized vaginal progesterone as the standard of care for luteal support in IVF, owing to the ease of oral. Because oral has the ease, only thing till now was that micronized could not be taken orally as micronized has sleepiness very high which is the big disadvantage of micronized vaginal progesterone.2

The LOTUS II was a randomized, open-label, multicenter, Phase III, non-inferiority study. Premenopausal women (>18 to <42 years of age) with a documented history of infertility who were planning to undergo IVF with or without ICSI, were enrolled in the study. Only fresh cycles were used. The objective was to establish oral Dydrogesterone 30 mg daily non-inferior to 8% Micronized Vaginal Progesterone (MVP) gel 90 mg daily for Luteal Phase Support (LPS). The structure of the study was same as LOTUS 1 study, again the 2 arms were there and the first arm has oral Dydrogesterone and the second arm was gel. At the end of 14 days, β-hCG was done and they were followed up for nearly 12 weeks and 4 outcomes were studied. The LOTUS II demonstrated that oral Dydrogesterone was non-inferior to micronized vaginal gel in the presence of fetal heartbeat and 12 weeks of gestation. Then the secondary objective was also met: positive pregnancy test, clinical pregnancy, live birth and new born were equivalent. Third objective was safety, which was very good and the implications were that it may replace gel as the standard of care for luteal support in IVF, which is again because of the ease of oral administration.3

However Van der Linden M in 2015, studied 94 RCTs of luteal support using progesterone hCG or GnRH agonist supplementation in ART cycles that fulfill the criteria of meta-analysis and the results state that hCG or progesterone given during the luteal phase may be associated with higher rates of live birth rate or ongoing pregnancy than placebo.

Physiology of CL Function and Disruption

Not all products may be available. With high dose estrogens, it may be suggested to add a low dose Aspirin and/or Low-Molecular-Weight Heparin (LMWH).14

Algorithm for LPS in Controlled Ovarian Stimulation (COS) cycles with timed intercourse or Intrauterine Insemination (IUI). 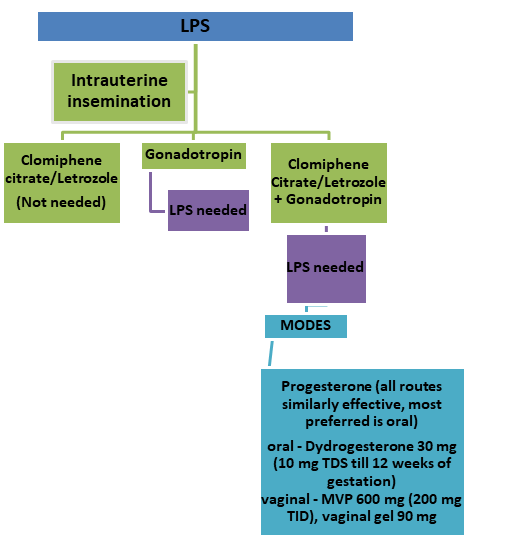 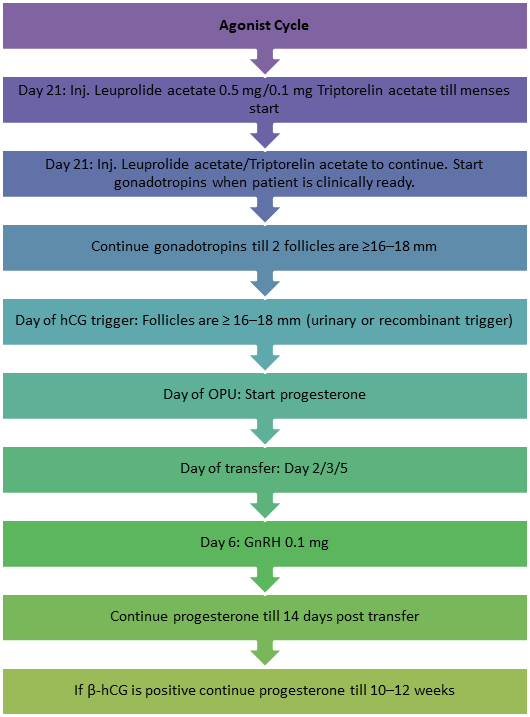 Algorithm of LPS in antagonist cycle 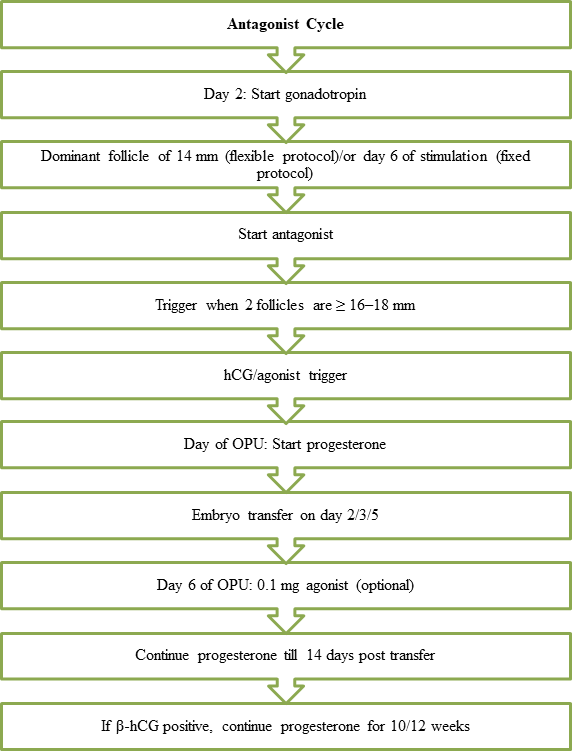 Continue estrogen and progesterone till 10 weeks of pregnancy 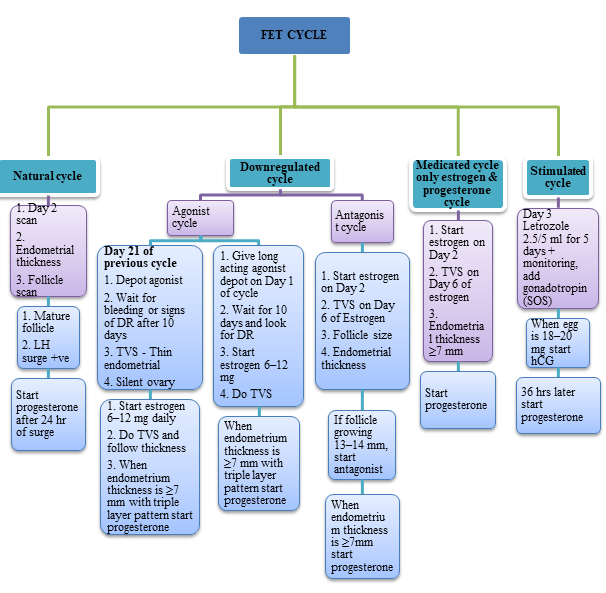 Choice of progesterone depends upon the following four factors:

Luteal Phase Defect (LPD) has been proven to be necessary for assisted reproductive technique. Progesterone with optional use of estrogen and GnRH agonist drugs are used in the treatment of LPD. The drug can be administered either by the oral preparation, vaginal administration or by injectable route. Dydrogesterone has been routinely used for LPD in IUI cycles. Studies have suggested the use of Dydrogesterone in fresh IVF cycles and Luteal Phase Support (LPS) is continued till 10–12 weeks. However, it may be stopped at the time of β-hCG becoming positive or visualization of a fetal heartbeat.

Practice Committee of the American Society for Reproductive Medicine. The clinical relevance of luteal phase deficiency: a committee opinionFertil Steril201298511127