Nagvekar and Nagvekar: A study to assess relation of cord blood prolactin levels and development of respiratory syndrome – an observational study

Introduction: Neonatal respiratory distress syndrome (RDS) occurs in infants whose lungs have not yet fully developed. It can also be due to genetic problems with lung development. Most cases of RDS occur in babies born before 37 to 39 weeks. This study was conducted to find out incidence of Respiratory Distress syndrome among preterm and term born neonates.

Respiratory distress syndrome (RDS), also known as hyaline membrane disease leads to severe morbidity and mortality in premature babies.1 It is one of the leading cause for hospitalization in neonatal intensive care units. In India, it has been observed that 0.7% to 8.3% of all perinatal deaths occur due to respiratory distress syndrome. It is well-known that inadequate pulmonary surfactant is responsible for the development of RDS. Several hormones (estradiol, cortisol, testosterone, thyroid hormones, glucagon’s, insulin) are involved in the production of lung surfactant.2 But due to the under developed lungs in these preterm babies, or due to other genetic reasons of lung development, the surfactant production is inadequate leading to neonatal distress among the babies born before 37 to 39 weeks. The more premature the baby is, the higher the chance of RDS after birth. The problem is uncommon in babies born full-term (after 39 weeks).3

Respiratory distress syndrome (RDS) is diagnosed by the presence of at least two of the following clinical signs: tachypnea (>60/min), dyspnea with inspiratory subcostal or intercostal retractions, nasal flaring, expiratory grunting and cyanosis in room air.4 Prolactin in increasing concentration through a complex mechanism seems to participate in pulmonary maturation.5 Several studies on prolactin in complicated pregnancies have shown correlation between prolactin levels and fetal outcome mainly in terms of development of respiratory distress syndrome. Thus, prolactin seems to have a role in lung maturation along with many other factors through a complex mechanism.6 Considering all the factors related to Respiratory Distress syndrome and cord blood prolactin levels, the present study was conducted to find out incidence of Respiratory Distress Syndrome(RDS) among preterm and term born neonates. We also tried to assess the cord blood prolactin levels of neonates of term gestations mothers without any medical or obstetric diseases as well as the relationship between the incidence of Respiratory distress syndrome and serum cord blood prolactin levels in term and preterm neonates.

This observational type of study was carried out over a period of 21/2 years from by the department of OBGY at Krishna institute of medical sciences, Karad. 60 mothers who received intra-partum care during this period were included into the study and their neonates were studied for the development of Respiratory distress syndrome. Based on the gestational age of the babies, they were divided into 2 groups. ‘Group A’ consisted of Neonates born to mothers with gestational age between 28-37 weeks i.e. preterm gestational neonates, and ‘Group B’ which consisted of neonates born to mother with gestational age more than 37 completed weeks or. term gestational neonates. All the mothers had singleton pregnancies with vertex presentation, with no other obstetric or medical risk factors. Mothers of Group A neonates had come in advanced stage of labor where the benefits of prophylactic antenatal corticosteroids could not be of use. Mothers with less than 28 weeks of gestation, those having any associated medical or obstetric disorder, those receiving prophylactic corticosteroid therapy or those delivered by instrumentation or caesarean section were excluded from the study.

This study was cleared by the Institutional Ethical Committee permission and informed consent was taken from all the mothers after the clearance. A detailed history and examination was carried out. The delivery of the mother carried out with all aseptic precautions. Approximately 3 cc of mixed arterial and venous blood was collected, without squeezing the cord in a plain sterile vial just after delivery. The sample was kept at room temperature for separation of serum. Thereafter it was sent for estimation of cord blood serum prolactin levels. The reports of the prolactin levels in the blood were kept unknown from the neonatologist.

Quantitative estimation of serum prolactin was done with the IMMULITE and IMMULITE 1000 Analyzers. Every delivery was attended by a neonatologist. Immediately after delivery the routine measures for neonatal care such as drying the baby, suction of nasal and oral secretions, etc. was carried out. APGAR score was calculated.

Routine follow-up of the neonates admitted to intensive care unit, on suspicion of respiratory distress syndrome was done. Respiratory distress syndrome was confirmed on the basis of clinical findings. The clinical presentation of expiratory grunting, tachypnea (respiratory rate more than 60/minute), subcostal and intercostal retractions, nasal flaring, and cyanosis was usually manifested in the first few hours and almost always before 8 hours of age. If symptoms did not develop until after 8 hours of normal breathing, RDS was excluded.

All the neonates with RDS were treated in N.I.C.U. by a special team of paeditricians. The neonates with severe RDS were given the respiratory ventilator support. In such cases, proper weaning was given so that ventilatory support can be removed early. Thorough antibiotic coverage was given to the neonates. During treatment, depending on the requirement, artificial surfactant was given through entotracheal route. Daily neonatal and maternal condition was observed and noted on a pre-designed and pre-structured questionnaire.

Gravida status of the mother 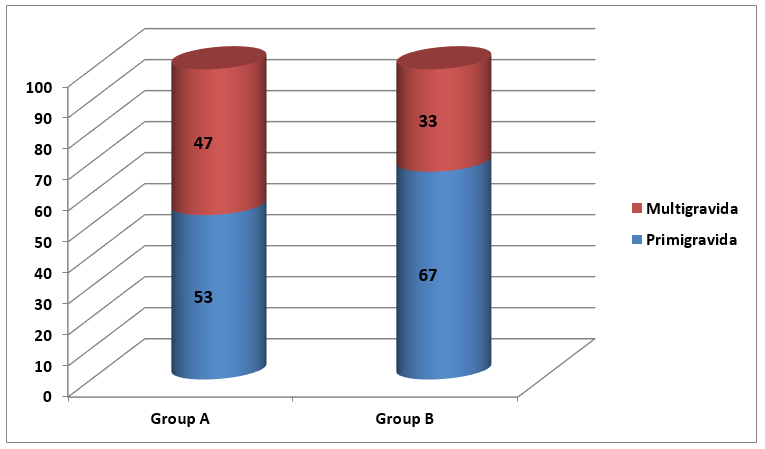 Distribution of babies in relation to Mortality

Table 3 shows that in Group A near 83.33% of babies developed RDS and among them about 64% of the babies expired which shows that as they were born before 37 weeks of gestations and due to prematurity many of them couldn’t survive. In Group B nearly 6 babies (20%) developed RDS and among them 1(16.66%) baby expired. The mortality was high among babies who were born premature.

The present study findings showed that in Group A near about 83.33% of babies developed RDS and among them about 64% of the babies expired which shows that as they were born before 37 weeks of gestations, and they were premature so many of them couldn’t survive. In Group B near about 6 babies (20%) developed RDS and among the 1(16.66%) baby expired. The mortality was high among babies who were born premature. In one study done by Adebami OJ 36% of infants died due to RDS.9 In a study done by Swarnkar’s et al.22.8% of infants died due to RDS.10

Prolactin levels play a very important role in lung maturation of newborns. The levels of prolactin increases with increase in gestational age. It was observed in present study as well as in other studies lower the gestational age, lower are the prolactin levels. Lowers prolactin levels leads to development of Respiratory distress syndrome due to immature lungs. There can be many reasons for premature delivery and such newborns are prone to development of RDS. So during antenatal period stress should be given for regular antenatal care and check up. Identification of high risk cases of premature delivery and giving them prompt treatment at right time is very important. Proper care during antenatal period can reduce preterm deliveries and ultimately decrease in incidence of RDS and decrease in neonatal mortality rate.